The BMJ’s Too Much Medicine initiative aims to highlight the threat to human health posed by overdiagnosis and the waste of resources on unnecessary care. We are part of a movement of doctors, researchers, patients, and policymakers who want to describe, raise awareness of, and find solutions to the problem of too much medicine.

Causes of too much medicine include expanded disease definitions, uncritical adoption of population screening, disease mongering and medicalisation, commercial vested interest, strongly held clinical beliefs, increased patient expectations, litigation, and fear of uncertainty and new technology. Winding back the harms of too much medicine invites clinicians to focus on those who are sick, and only intervene with those who are well when there is a strong case to do so.

How to decide how much is too much?

Who gets to define disease and how? To make sound judgements doctors, patients, and policy makers need to consider a broad picture; evidence on the balance of benefit and harm or different approaches as well as context, values, resources, and ethics.

A BMJ theme issue on overdiagnosis, published in March 2015, looks at what is too much medicine and who gets to decide? Although there is consensus that too much medicine is real and damaging, uncertainties remain about where and how the lines between appropriate and inappropriate care should be drawn in any individual case. Importantly, overuse of diagnosis and treatment can co-exist with underuse within the same population. Resources being wasted on overuse could be reapplied to areas of underuse. Find out more here.

In 2002 Ray Moynihan argued that modern medicine had undermined the capacity of individuals and societies to cope with death, pain, and sickness. He said the pharma industry had extended the boundaries of treatable disease to expand markets for new products. Barbara Mintzes blamed direct to consumer advertising of drugs in the US for portraying a dual message of “a pill for every ill,” and “an ill for every pill.” Elsewhere in the issue, doctors were accused of colluding in and encouraging medicalisation. Leonard Leibovici and Michel Lièvre wrote : “The bad things of life: old age, death, pain, and handicap are thrust on doctors to keep families and society from facing them.”

How to spot too much medicine

A hallmark of too much medicine is increased diagnosis or medical activity for little gain, as described by Brito et al in their article on thyroid cancer.

"The most compelling evidence that patients with low risk cancers are being overtreated is that despite a threefold increase in incidence of papillary thyroid cancer over the past 30 years, the death rate has remained stable (0.5/100 000 in 1979 and 0.5/100 000 in 2009)" 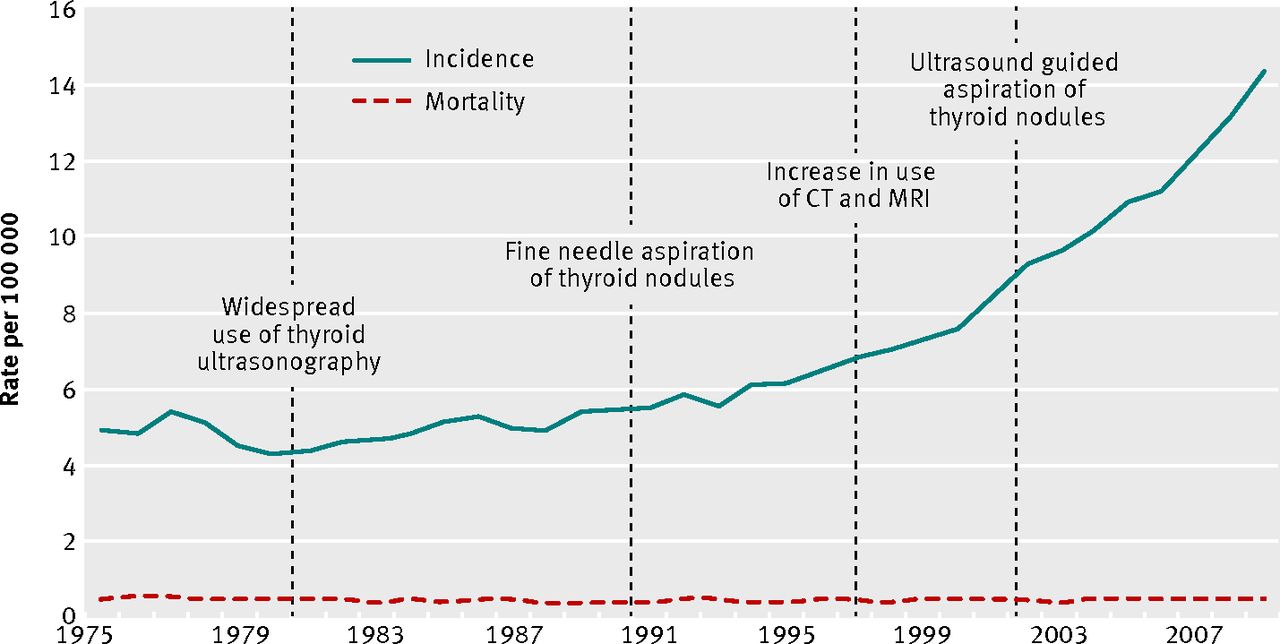 Why is it difficult?

Too much medicine can be difficult to understand because it is often counterintuitive. For example, it seems obvious that new diagnostic technology must be a good thing, that detecting disease sooner rather than later will improve the outcome, and that it is better to do something (test, treat, or label) rather than watch and wait. It can be difficult for clinicians and patients to face uncertainty about what the cause of a symptom might be, and as a society we have become unwilling to accept death as part of life.


Appreciate the broader context of too much medicine in this series of ethical essays:

Projects at The BMJ

The BMJ publishes a popular series highlighting medical conditions which may be overdiagnosed.

2017 - The European Journal of Hospital Pharmacy theme issues on deprescribing

2018 - Overdiagnosis in primary care: framing the problem and finding solutions

The BMJ is the media partner for the international scientific conference, Preventing Overdiagnosis. The last conference took place on 5-7 December 2019 in Sydney.
Listen to the podcast round up

In July 2016 the journal joined forces with the overdiagnosis standing group of the UK’s Royal College of General Practitioners, whose campaign Better medicine: shared decisions, best evidence is also hosted on bmj.com.

Interactive timelines of relevant articles from The BMJ

The BMJ is a partner in the international scientific conference, Preventing Overdiagnosis. The last conference took place on 20–22 August 2018 in Copenhagen. Find out more by looking at our digital theme issue on overdiagnosis. This opinion piece by The BMJ's Helen Macdonald discusses the themes of the conference.