What should we eat in order to stay healthy and avoid disease? Nutrition is one of the biggest drivers of chronic diseases, including obesity and diabetes, yet the answer to this seemingly simple question remains a subject of heated debate.

This collection brings together some of the world’s most thoughtful and influential voices in the field of nutrition and health, representing a range of backgrounds and perspectives, to help make sense of the state of current knowledge, the quality of the evidence on key issues, the extent and implications of potential disagreements between experts, and the agenda for further research.

• Why would a leading global reinsurer be interested in nutrition?
John Schoonbee, Emile Elefteriadis 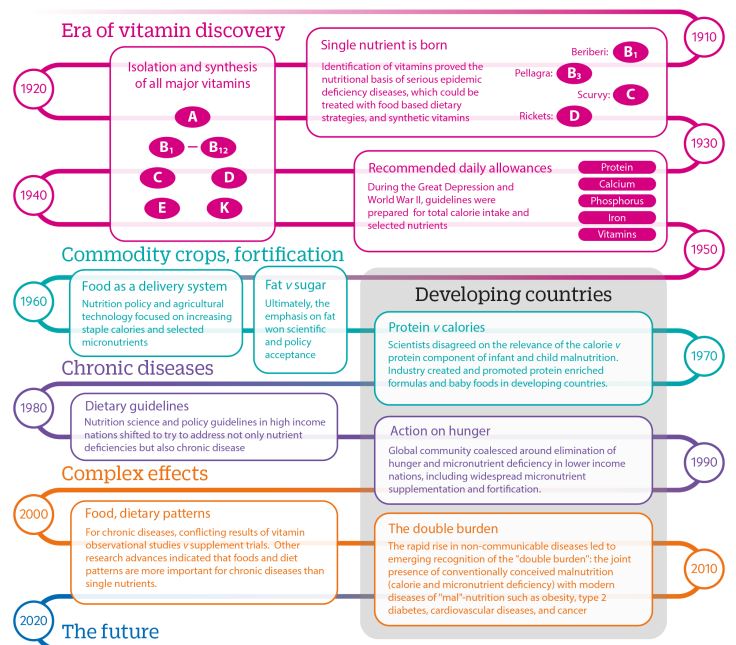 Infographic: A timeline of nutrition research
While food and nutrition have been studied for centuries, modern nutritional science is surprisingly young. This timeline shows how developments in the early 20th century have persistantly shaped our understanding of the field.

The BMJ thanks our series advisers, Dariush Mozaffarian and Nita Forouhi, for valuable advice and guiding selection of topics in the series. These articles are part of a series commissioned by The BMJ. Open access fees for the series were funded by The Swiss Re Institute, which had no input in to the commissioning or peer review of the articles.

The series was launched at a meeting co-hosted by The BMJ and the Swiss Re Institute in Zurich in June 2018, bringing together nutritional researchers, clinicians, and policy makers to discuss the topics covered in the series.

View the Food for Thought 2020 collection:

From The BMJ
• Dietary guidelines and health—is nutrition science up to the task?
Dariush Mozaffarian, Jean Mayer, Nita G Forouhi