The novel coronavirus (2019-nCoV) began circulating in China in December 2019. The number of confirmed cases and deaths from this pneumonia-like condition are rising. This page is where all BMJ coverage of the coronavirus outbreak can be found. All articles and resources are freely available.

Read our timeline of coronavirus outbreak

What we currently understand about the virus 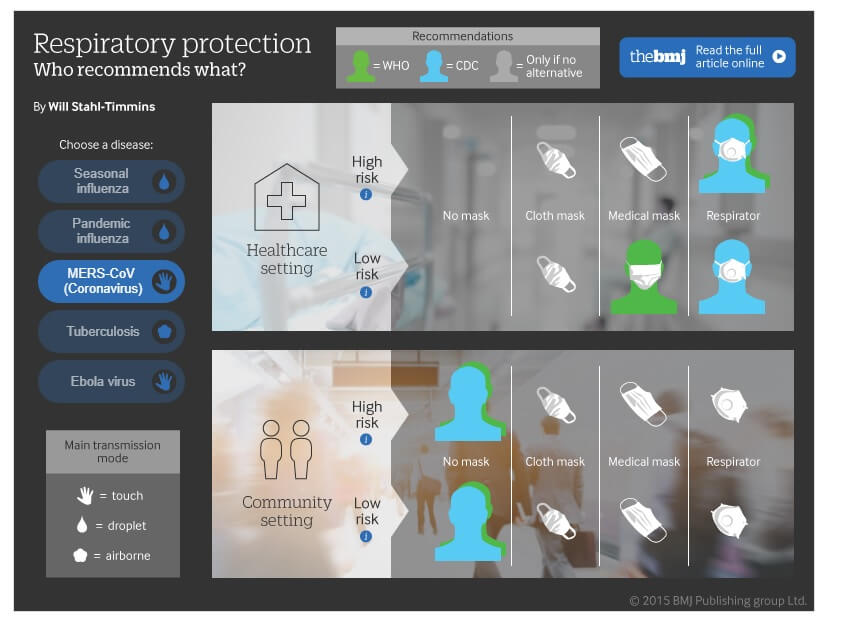 Last June, BMJ joined Yale University and Cold Spring Harbor lab to launch medRxiv ("med-archive"), a preprint server for the rapid dissemination of research articles in clinical medicine. medRxiv has posted a number of preprints about the new coronavirus that has emerged from China. This means that anyone working on responses can have a complete article to examine.

Read all of the preprints posted about Coronavirus.

17 February - The China National Health Commission reported a total of 72 436 confirmed cases of the virus and 1868 deaths in the country. They said over 12 500 patients have recovered and been discharged from hospital, while around 58 000 confirmed cases (including 11 741 in serious condition) and 6242 suspected cases remained. Outside of China, WHO reported 794 cases across 26 countries, and three deaths.

13 February - BMA tells NHS England that general practices should be able to turn off their online booking systems in response to the covid-19 outbreak, without fear of repercussions over breaching their contract. They warned that online systems do not triage patients in the same way that a receptionist does, which could lead to potential cases turning up at the practice and putting patients and staff at risk.

11 February - The number of confirmed cases in China hit 42 708 and the number of deaths surpassed 1000. Outside of China, 393 cases and one death were reported. In the UK, a GP practice in Brighton closed after two GPs were found to have the virus. WHO announced the virus would be known as COVID-19. Director general Tedros Adhanom Ghebreyesus said, "Having a name matters to prevent the use of other names that can be inaccurate or stigmatising."

10 February - UK government declared that novel coronavirus 2019-nCoV constitutes a serious and imminent threat to public health. Meanwhile, the MRC Centre for Global Infectious Disease Analysis at Imperial College London estimated that for all cases of the virus, the case fatality ratio is around 1%.

7 February - Li Wenliang - a doctor from Wuhan, China, who said he was reprimanded by police for warning other doctors about novel coronavirus at the start of the outbreak - died after being infected with 2019-nCoV.

6 February - Third novel coronavirus case confirmed in the UK. Chris Whitty, chief medical officer for England said, “The individual did not acquire this in the UK. The patient is being transferred to a specialist NHS centre, and we are using robust infection control measures to prevent any possible further spread of the virus. The NHS is well prepared to manage these cases and we are now working quickly to identify any contacts the patient has had.” WHO then warned that the global demand for personal protective equipment such as masks and respirators was 100 times the normal level, and costs had skyrocketed to around 20 times the usual price. It said worldwide stocks were “insufficient” to meet demand and called on manufacturers to only sell equipment to healthcare professionals.

5 February - Thousands of passengers on a cruise ship, stopped in Yokohama, Japan, are quarantined for two weeks after 10 people on board were found to be infected with the novel coronavirus. Meanwhile, GPs in some areas of Australia raised concerns over a lack of appropriate personal protective gear, including face masks, for themselves and their staff. The gear is needed as part of the coronavirus response. The Royal Australian College of General Practitioners said the recent bushfires had led to face mask shortages, but that the government would distribute its emergency medical stockpile.

4 February - First case of novel coronavirus confirmed in Belgium. The person was thought to be one of citizens evacuated from Wuhan, China

3 February - Total reported cases rose to 17 488, with 362 deaths. However, China reported that 475 people had recovered. The number of confirmed cases in Japan hit 20, while there were 19 cases in Thailand, 18 in Singapore, 15 in South Korea, 12 in Australia, 11 in the US, 10 each in Taiwan and Germany, eight in Malaysia, six each in France and Vietnam, four in Canada, two each in Britain, Italy, Philippines, India, and Russia, and one each in Spain, Cambodia, Nepal, Sri Lanka, and Sweden. In the UK, the government announced £20m in research funding for the development of new vaccines for coronavirus and other infectious diseases.

2 February - The first death from novel coronavirus was reported outside of China, in man from Wuhan who was believed to have been infected before arriving in the Philippines. Meanwhile, thousands of hospital workers in Hong Kong voted to strike in order to pressure the government to fully close the borders with mainland China.

31 January - The latest figures suggest that there are nearly 10 000 confirmed cases and more than 200 deaths. The UK reported it's first two confirmed cases of the virus.

30 January - The World Health Organisation declared a Public Health Emergency of International Concern over the novel coronavirus (2019-nCoV) outbreak. It reported that the virus had spread to 18 countries, and that human to human transmission had occurred in four - Germany, Japan, Vietnam and the US. It said the declaration was "not because of what is happening in China, but because of what is happening in other countries. Our greatest concern is for the virus to spread to countries with weaker health systems that are ill prepared to deal with it.”

29 January - The UK government has announced plans to fly hundreds of British citizens back from Wuhan and quarantine them for two weeks. The move comes after British Airways suspended all flights to and from mainland China until at least 31 January. Other countries, including Australia, Japan, the US have also started to repatriate citizens.

28 January - 4520 confirmed cases and 106 deaths have been reported in China (including Macau). Outside China 15 countries have reported cases. These are Thailand (14 cases), Hong Kong (eight), the US (five), Taiwan (five), Australia (five), Singapore (four), Japan (four), South Korea (four), Malaysia (four), France (three), Canada (two), Vietnam (two), Nepal (one), Cambodia (one) and Germany (one). No deaths have been reported outside China.

25 January - Updated report from the MRC centre at Imperial College London estimated that up to 18 January, the R0 was 2.6 (uncertainty range: 1.5-3.5), meaning that, on average, each case infected 2.6 other people. It said control measures need to block well over 60% of transmission to be effective in controlling the outbreak. It added that in the absence of antiviral drugs or vaccines, “control relies upon the prompt detection and isolation of symptomatic cases.”

23 January - 14 people in the UK are tested for the virus, however all are found to be negative. Chinese authorities put Wuhan in lockdown and expanded travel restrictions to several nearby cities. The WHO also met to examine the situation but decided against announcing a Public Health Emergency of International Concern (PHEIC). It also estimated that the preliminary R0 (reproduction number) estimate is 1.4 to 2.5, meaning that every person infected could infect between 1.4 and 2.5 people.

22 January - The UK began sending health teams to meet each direct flight aircraft from Wuhan, China, to check for symptoms of novel coronavirus (2019-nCoV) and to provide information in English, Mandarin, and Cantonese to all passengers about symptoms and what to do if they become ill. However, China then announced it would be shutting down transportation from Wuhan.

21 January - The first US case was reported in a man who travelled from Wuhan to Washington State. Meanwhile, a man who returned from China to Australia with respiratory symptoms was tested, but was found not to have the virus.

20 January - Researchers at the MRC Centre for Global Infectious Disease Analysis at Imperial College London estimated that a total of 4000 people in Wuhan City had an onset of symptoms caused by the novel disease (uncertainty range: 1,000 – 9,700) by 18th January 2020.

20 January - Chinese authorities confirmed evidence of human to human transmission, after the virus spread to 14 health workers in China. South Korea announced its first confirmed case, in a 35 year old Chinese woman who flew from Wuhan to Incheon international airport.

16 January - Thailand announced that a 74 year old Chinese woman had been quarantined on arrival in the country and had tested positive.

15 January - Japan announced that a man in his 30s who had been to Wuhan tested positive for the virus on his return to Japan. He recovered and was discharged from hospital five days later.

13 January - Thailand reported a 61 year old woman had tested positive for the virus, despite not having visited the seafood market where the outbreak is thought to have originated.

11/12 January 2020 - China told The WHO the outbreak was associated with exposures in one seafood market in Wuhan City. Chinese authorities then identified the mystery disease as a new type of coronavirus, and shared its genetic sequence for countries to use in developing specific diagnostic kits.

31 December 2019 - The first reports of the coronavirus - known then as pneumonia with unknown cause - came from Wuhan City, Hubei Province of China.

The outbreak of the novel coronavirus in China (2019-nCoV) represents a significant and urgent threat to global health.

We call on researchers, journals and funders to ensure that research findings and data relevant to this outbreak are shared rapidly and openly to inform the public health response and help save lives.

We affirm the commitment to the principles set out in the 2016 Statement on data sharing in public health emergencies, and will seek to ensure that the World Health Organization has rapid access to emerging findings that could aid the global response.

Specifically, we commit to work together to help ensure:

• all peer-reviewed research publications relevant to the outbreak are made immediately open access, or freely available at least for the duration of the outbreak

• research findings relevant to the outbreak are shared immediately with the WHO upon journal submission, by the journal and with author knowledge

• research findings are made available via preprint servers before journal publication, or via platforms that make papers openly accessible before peer review, with clear statements regarding the availability of underlying data

• researchers share interim and final research data relating to the outbreak, together with protocols and standards used to collect the data, as rapidly and widely as possible - including with public health and research communities and the WHO

We intend to apply the principles of this statement to similar outbreaks in the future where there is a significant public health benefit to ensuring data is shared widely and rapidly.

We urge others to make the same commitments. If your organisation is committed to supporting these principles, please contact us (d.carr@wellcome.ac.uk) and we will add your organisation to the list of signatories

Bulletin of the World Health Organization

The Department for International Development (DFID)

The Research Council of Norway

ZonMW - The Netherlands Organisation for Health Research and Development