Last year’s Ebola epidemic in east Africa is over, in part thanks to a traditional burial process that keeps communities safe while allowing them to say goodbye in an acceptable way. Jane Feinmann reports

The latest outbreak of Ebola virus disease, reported in nine districts of Uganda in September 2022,1 was declared officially over by the country’s Ministry of Health on 11 January. A total of 142 cases and 55 deaths have been reported, contrasting with the 11 000 deaths during the world’s deadliest Ebola epidemic from 2014 to 2016.

The lessons learnt from the 2014-2016 epidemic in west Africa allowed the International Federation of Red Cross and Red Crescent Societies (IFRC) to develop community centred and culturally adapted public health responses that allow families to mourn their dying loved ones and say goodbye in what they regard as an acceptable way while keeping them safe from infection.

“Throughout west Africa there’s a tradition of relatives washing and cleaning the body of the deceased and then using that water to cleanse their hands to signify unity,” says Bronwyn Nichol, IFRC’s epidemic preparedness and response coordinator for the Africa region.

But these deeply personal religious rituals to prepare bodies for burial or cremation were actually spreading the virus, says Gwen Eamer, IFRC’s senior officer for public health in emergencies, “leading to situations where bereaved families were confronted by teams of health workers wearing full PPE [personal protective equipment] suits, ordering them to stop performing what they regarded as essential rituals.”

“When people don’t understand, you can’t just yell louder,” she tells The BMJ. “What causes problems isn’t always what people think of the virus. It’s what they think of us—the healthcare teams—and the feasibility of what we’re asking them to do.”

Safe and dignified burials aren’t new and have been credited with stemming the spread of Ebola for some years.2 But IFRC’s recent protocol recognises that efforts to stop transmission must, as a priority, dismantle the barriers in the way of healthy behavioural change.3

“If these barriers are ignored then healthy behaviour can often be imposed, for instance by forcing people into isolation centres without consultation or support or even using armed guards,” Eamer says. “Then there’s a risk of tensions developing that can threaten the bond between individuals and communities and the health system that serves them, while the epidemic continues to wreak havoc.”

When the 2022 Ebola outbreak was confirmed in Uganda, specialist teams of volunteers, trained in safe and dignified burial protocol and psychosocial first aid, were rapidly deployed to the town of Mubende, at the centre of the epidemic.

“A slow response means the virus can spread,” says Nichol. “Safe and dignified burials are very labour intensive. Specialist units need to communicate with the family as well as safely managing and transporting the body of the deceased.”

Since the beginning of the outbreak in September, Uganda Red Cross has mobilised three Safe and Dignified Burial teams, which have carried out 133 burials. A total of 1201 volunteers have been mobilised in activities concerning risk communication and community engagement, and to conduct community based surveillance, reaching more than 283 000 people.

Only the team members who focus on managing the body wear PPE. Their job is to enter the house to prepare the body for the body bag. Once the body is in the bag, they then decontaminate the bag so it can be placed in the coffin and buried according to the family’s wishes and in line with government rules. Families are encouraged to participate in the burial process in ways that keep them safe, with those in charge of explaining what will happen remaining PPE free.

“The volunteers are part of the communities they serve,” says Nichol. “This makes it easier to explain the processes and increase acceptance of safe protocols.”

If a family won’t allow access by burial teams, the teams negotiate how best to meet the needs of the family and its traditions while ensuring safety. In one recent case of a pregnant woman who died, tradition required the fetus to be removed by caesarean section. “It was believed the two souls had to be buried separately,” explains Nichol, “but of course that would present a very high risk of infection.”

The team of volunteers, joined by local traditional leaders, were able to convince the family of the risks of surgery, and the husband agreed to perform a substitute ritual suggested by community leaders. “This involved him wearing partial PPE and wiping the body bag from head to toe with a banana flower,” says Nichol. The flower was wrapped in bed sheets and buried in a separate grave, signifying for the family the removal of the baby from the mother’s womb.

“Transmission of the virus is best prevented by two way communication at every step,” says Eamer. “This might involve putting out messages on radio shows, community theatre, videos, and cartoons to help people understand the need for contact tracing as well as the dangers around unsafe handling of corpses.

“We approach people with humility and openness, standing ready to do whatever is necessary to gain their trust.”

The IFRC is the subject of The BMJ’s annual appeal for 2022-23. Please give generously to support the mission of the IFRC across the world.

Donate online at https://bit.ly/IFRC-TheBMJ or scan the QR code below. 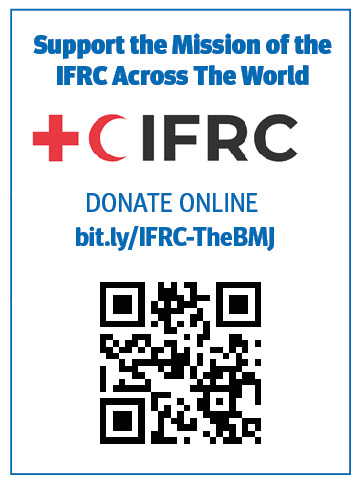 See other articles in issue 8367