Cholera is back but the world is looking away

To overcome this preventable disease we need to invest in failing infrastructure and tackle humanitarian crises at cholera’s roots, says Petra Khoury

Once thought to be close to eradication, cholera is back—dehydrating and killing people within hours and ravaging communities across six continents. Despite the alarming numbers of cases and deaths over the past year, decision makers are averting their eyes, leaving people to die from a preventable and treatable disease.

The healthcare community should sound the alarm for immediate actions. A strong and global emergency response is urgently needed, but it is only a first step. More than ever the world must invest in water and sanitation systems and prepare communities before outbreaks occur.

Over the past 200 years, there have been seven cholera pandemics, and today’s surge is the largest in a decade. In 2022, 30 countries reported cholera outbreaks, including places that had been free of the disease for decades. In Haiti, where millions of people have been displaced by violence, cholera has killed hundreds of people in just a few months.1 Lebanon is experiencing its first outbreak since 1993, with more than 6000 recorded cases.2 After devastating floods, Nigeria had a major cholera outbreak.3 In Malawi, the worst outbreak in decades has left 620 people dead since March.4 Schools are now closed in an attempt to stop the surge of infections.

The risk of cholera transmission multiplies when people live in poor or overcrowded conditions and lack access to safe water, proper sanitation, and hygiene facilities. A diarrhoeal disease caused by the Vibrio cholerae bacteria, cholera is commonly spread through contaminated food or water. Left untreated, it can cause severe dehydration and be deadly within hours.

Almost half of the world's population—approximately 3.6 billion people—live without safely managed sanitation in their home, leaving them vulnerable to cholera outbreaks.5 The World Health Organization reports that at least two billion people consume water from sources contaminated with faeces.6

The root causes behind the spate of recent cholera outbreaks are, however, complex and multifaceted. Overlapping humanitarian crises around the world, such as migration, conflicts, poverty, and social injustice are forcing people to live in unsanitary conditions, and this is fuelling the spread of this infectious disease. In the aftermath of the covid-19 pandemic, the number of people living in extreme poverty increased for the first time in a generation.7 And now, rising inflation and the repercussions of the conflict in Ukraine could worsen an already dire situation.

Climate change plays a part in contributing to the spread of cholera. More frequent and intense extreme weather events, such as hurricanes and floods, have resulted in major disruption to water treatment processes and damaged sanitary infrastructure in many parts of the world. The combination of higher temperatures and extreme precipitation leads to a higher incidence of waterborne infections like cholera.

Factors such as food insecurity also exacerbate the vulnerability of communities to the spread of cholera. Malnourishment weakens the immune system, increasing a person’s risk of severe symptoms and death. As global events drive up food prices, the number of malnourished people has also risen. An estimated 140 million people in Africa face severe food insecurity.8

Cholera can be treated through a simple method called oral rehydration treatment, but many people cannot access this lifesaving tool—an estimated 56% of children with diarrhoea are not able to receive this treatment.9 Cholera can also be prevented through the oral cholera vaccine, but supply cannot meet current needs. By the end of 2022, 11 countries experiencing cholera outbreaks had requested 61 million doses of the vaccine—far more than the 36 million doses that were expected to be produced.1011 The shortage of vaccines has recently forced the International Coordinating Group, of which the International Federation of Red Cross and Red Crescent Societies (IFRC) is a part, to switch from a two dose to a single dose strategy so that coverage can be expanded.11

In places such as Malawi and Haiti, the mortality rate from cholera tripled in 2022.12 Nobody should die from a preventable and treatable disease. This level of suffering is morally unacceptable.

The IFRC has launched a time sensitive emergency response in 20 countries, where trained Red Cross and Red Crescent volunteers track transmission routes while also ensuring that sanitation facilities are working and that safe water supplies are available. At the community level, teams treat people by administering oral rehydration treatment and referring those most severely affected to hospital. In Malawi, where the number of infections is increasing daily, the Red Cross has established 14 oral rehydration points across the country and is reaching more than 753 000 people with health and hygiene campaigns.

Volunteers also play a major part in cholera vaccination campaigns. The Lebanese Red Cross, for example, has contributed considerably to the rollout of the national cholera vaccination campaign. Through door-to-door visits of households, institutions, and organisations, the Lebanese Red Cross vaccinated more than 260 000 people in only 39 days across 151 municipalities.

In countries where cholera is endemic, we are implementing sustainable long term water systems, sanitation, and hygiene programmes. For instance, in the countries where we are operating, we built and rehabilitated 1300 water systems, more than 7000 sanitation facilities in households, schools, and health centres, and close to 6000 handwashing stations, improving the lives of more than three million people around the world.

Red Cross and Red Crescent staff and volunteers are on the frontlines of this public health emergency, but we are not able to do this alone. The resurgence of cholera around the world despite decades of eradication efforts suggest that cholera control, prevention, and response mechanisms must be rapidly amplified.

To prevent outbreaks, reduce transmission, and save lives, we need political commitment and greater financial resources. We must ensure access to safe water supplies and invest in proper sanitation infrastructure in the communities most at risk. We need to increase the production and distribution of oral cholera vaccines. Public health systems and cholera treatment centres must be better funded. Lastly, we need to build trust in communities. People are less likely to follow preventive measures if they do not trust their community leaders and health systems.

But to really put an end to cholera, we cannot forget the humanitarian crises at root level. Governments, non-governmental organisations, and the private sector must finally mobilise and increase investments in infrastructure and health and social systems so that they can withstand the fallout from disasters, conflicts, and climate change.

One of the most important lessons we learnt from the covid-19 pandemic is that no one is safe until everyone is safe. It is in everyone’s best interests to work together and ensure that no one is left behind.

Please give generously to The BMJ’s appeal for 2022-23 to support the mission of the IFRC across the world.

Please donate online at https://bit.ly/IFRC-TheBMJ or scan the QR code below. 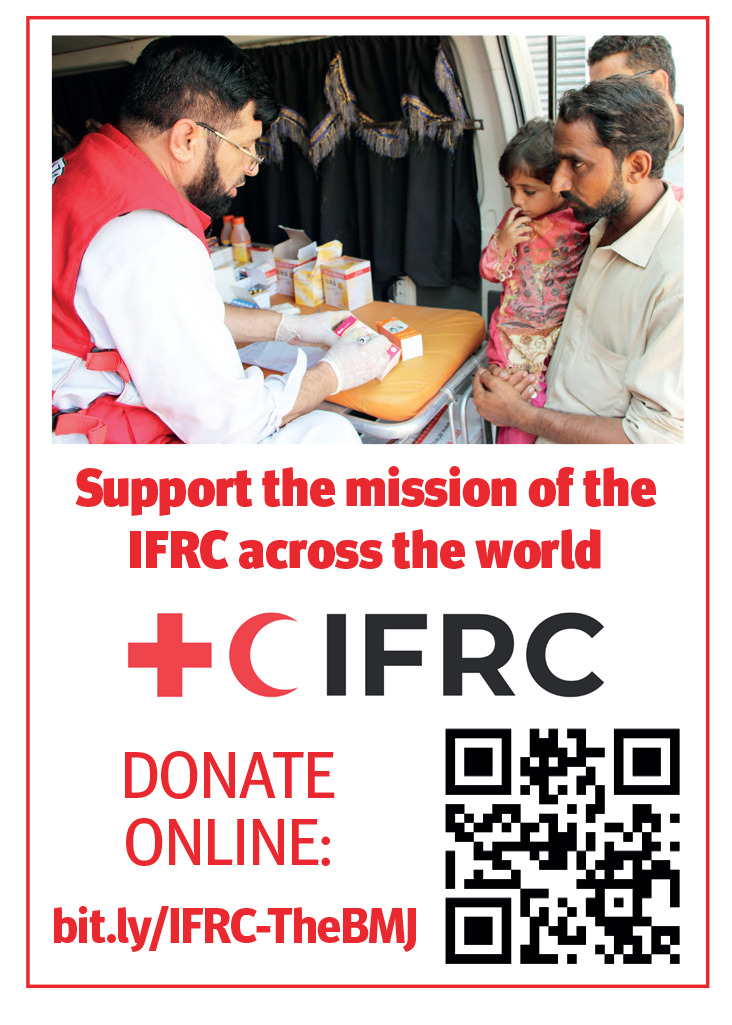 See other articles in issue 8368