Preoccupied with the war, Russia skipped one wave of covid and ignored another

Russia has almost forgotten about covid-19—but the virus has not forgotten Russia. Polina Loseva reports

The question of how Russia is doing in the ongoing pandemic is an opaque one. In February 2022 the first omicron wave hit Russia harder than any previous covid-19 wave: more than 200 000 cases were registered daily at its peak, up from 30 000 during the alpha wave in early 2021.

On 24 February, the day the UK dropped its self-isolation restrictions, Russian troops started to bomb Ukrainian cities. All covid-19 issues in Russia were forgotten as the state turned exclusively to promoting the war.

Since then, Europe has faced two more omicron waves. With the Russian government busy supporting its troops and soothing the population’s discontent, what became of Russia’s covid response? One major wave seems to have missed the country completely, while previous waves had hit as hard as in Europe, if not worse. As 2022 draws to a close, where does the Russian covid response go from here?

At the end of February the Russian government started lifting pandemic restrictions. This was done gradually, with regional authorities taking decisions independently: Moscow, for instance, lifted the requirement for one third of all staff to work from home. Next to go was the self-isolation regimen for people aged over 60, on 28 February. Then, in mid-March, the capital made mask wearing optional rather than mandatory. By August most of the pandemic restrictions had been lifted throughout the country.

The general public and media seemed to forget the pandemic completely. Independent polling data showed that only 5% of respondents mentioned the covid pandemic among significant events from March.1 By August that percentage had fallen below 1%, and some headlines declared the pandemic over.

The pattern of covid-19 waves in Russia is usually a month or two behind Europe, which by March 2022 was seeing a new omicron wave fuelled by looser restrictions and the BA.2 variant. But no second omicron wave arrived in Russia in April. The Russian health minister, Mikhail Murashko, warned that this wave might hit at the end of May or early in summer; that didn’t happen either. Instead, the number of daily confirmed cases kept falling from 17 February to below 4000 by June (fig 1). 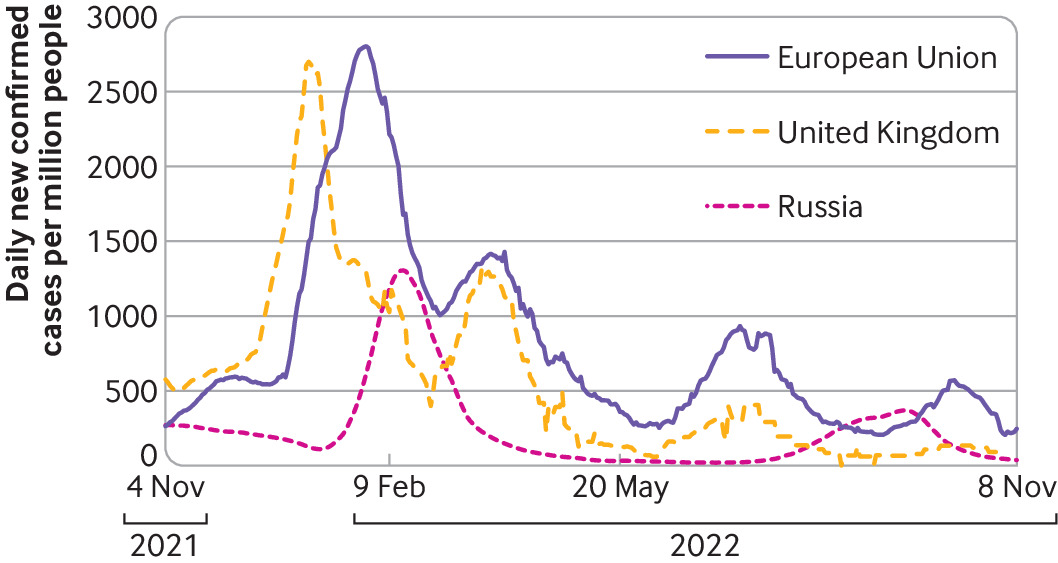 Why this happened is not exactly clear, but a mix of conflicting distancing measures, for covid and otherwise, could be one reason. For instance, although some cultural events are allowed, such as the 30 September concert to celebrate the “incorporation” of new territories, public political gatherings are still banned by some local authorities—officially, to restrict the spread of covid-19. As recently as 23 October, the Moscow mayor’s office declined a proposal for a public reading in memory of historical victims of governmental violence and terror, citing the “prevention of the spread of coronavirus in Moscow.”

Since the beginning of the pandemic, the Russian government has also banned its citizens from leaving the country by land and sea without a “viable reason” (such as education or medical treatment). This remained in effect until July this year, three months after the first omicron wave ended. The travel ban is now lifted, but the war’s subsequent border closures may also have helped to slow spread of the omicron subvariants: most international flights to Russia were cancelled in the early days of the conflict.

That said, by the time the BA.2 subvariant was surging in Europe, it was already behind Russian lines. The CORGI (Coronavirus Russian Genetics Initiative) consortium, which aggregates sequencing data from patient samples from all over the country, reports that the prevalence of BA.2 was over 20% in February 2022 (fig 2).2 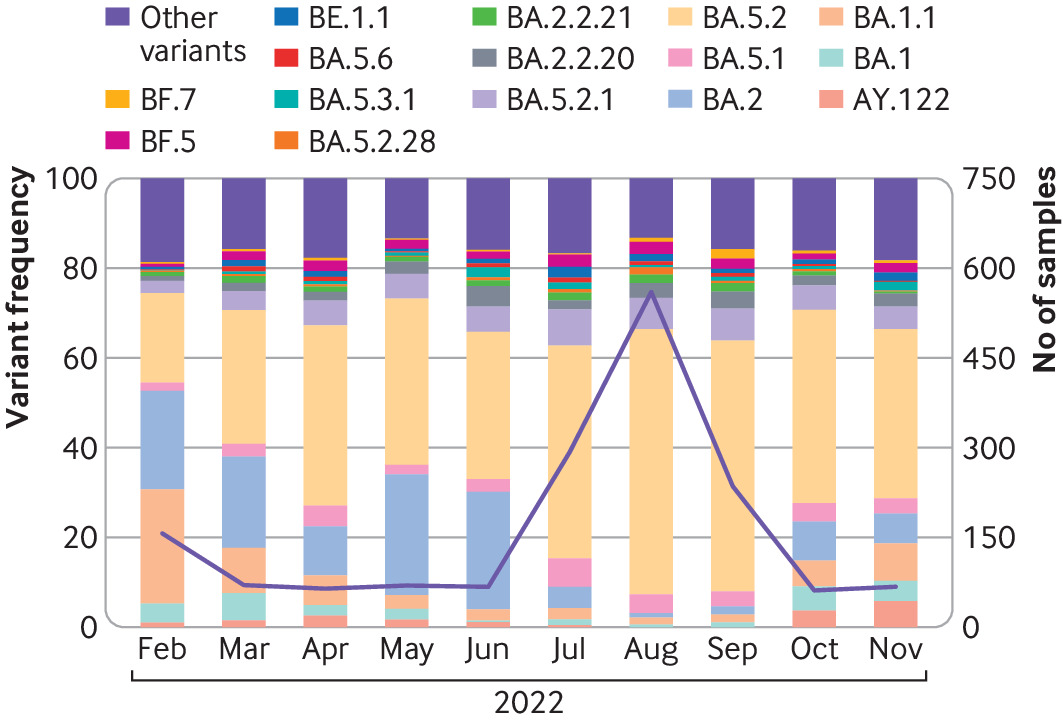 More likely, a surge was not noticeable because the numbers of BA.2 cases overlapped with the tail end of the first omicron wave. Dmitry Pruss, a geneticist who closely monitors variant spread, also suggests that because many people contracted and recovered from BA.1, they gained some immunity to BA.2. Thus, any second wave through March and early April may have been smaller and harder to distinguish. “It’s by no means unique,” Pruss told The BMJ, pointing out that the same may apply to Denmark, which also had no distinguishable second omicron wave.

In June, Europe experienced its third omicron wave of the year, caused by the BA.5 subvariant. And this time, Russia definitely noticed. CORGI data show that, as the prevalence of BA.5 in Russia reached 50%, case numbers peaked at 59 000 a day on 16 September, Russia’s second highest on record.

Russian authorities, however, didn’t pay much attention. The only recommendation issued by the Russian Federal State Agency for Health and Consumer Rights was to reintroduce masking once the infection rate reached 50 cases of covid in every 100 000 people in a region. Not all regional authorities followed the advice. Moscow reported as many as 8000 infections daily—equating to 63 cases in 100 000 people—and Saint Petersburg reported almost 80 cases in 100 000. Neither of Russia’s two biggest cities reintroduced the mask mandate, or any other restrictions, although some regions did. The federal state agency didn’t comment on this decision for The BMJ.

As the cases ratcheted up, President Vladimir Putin declared a “partial” mobilisation of troops, mandatorily enlisting citizens to the army. In just two days thousands were sent to military camps, with no specific measures to prevent the spread of infection.

Vaccination against covid-19 was declared mandatory for unvaccinated new recruits: 47% of the population is estimated to be unvaccinated after the state’s Sputnik V vaccine against covid-19 received widespread criticism (no non-Russian vaccines are available in the country). Confusingly, Sputnik doesn’t appear to be on the official list of vaccines administered to recruits, and even if they were inoculated with it, some of these troops were sent onto the battlefield almost immediately—not enough time for a vaccine to take effect (estimated to be at least a month after the first dose).

There have been no official data on the covid-19 infection rate in the troops since April. But videos are now emerging of recruits in the training camps speaking of large numbers falling sick. The symptoms—fever and cough, while others report lost smell and taste—are typical for covid-19 but are not common for omicron infections.

Living with covid during war

At the time of writing, the infection rate all over Russia has been steadily declining despite the lack of measures to contain it. The BA.5 surge is over, having apparently peaked. This is not dissimilar to what’s happening in Europe and the UK, which similarly see declining case numbers despite few, if any, restrictions being reintroduced. But Britain’s “living with covid” roadmap included not just a lifting of restrictions but a heavy reliance on high vaccination levels and ongoing virus surveillance. This is not the case in Russia.

At the peak of the first omicron surge more than 70% of Britons had been vaccinated,3 which compared with less than 50% in Russia.4 In October 2022 it was still under 60%. And only 12% of Russians have been revaccinated so far.

In the meantime, the Russian vaccine market has shrunk dramatically. Just one option is widely available for vaccination: Sputnik V. The manufacturers of two other vaccine preparations, EpiVacCorona and CoviVac, stopped production by summer 2022, as there was no more demand from the government. No foreign vaccine has been registered so far, be that western or eastern.

No updates for old vaccines have been approved, either. Following the example of Pfizer and Moderna, the Gamaleya Institute has produced a delta and omicron adapted variant of Sputnik V. Yet this is neither available nor recommended for vaccination. Moreover, the demand for covid shots among the public is waning: vaccination is no longer mandatory, no longer promoted, and thus no longer of much interest to people (fig 3).

As for surveillance, the number of samples sequenced by the CORGI consortium reached its minimum in April. Bureaucratic delays may be the reason, said Andrey Komissarov from the Smorodintsev Research Institute of Influenza, which leads the CORGI consortium. He told The BMJ, “The government distributed grants for the sequencing of SARS-CoV-2. As it takes time to purchase the state contracts, the reagents arrive slowly.” The sequencing effort regained its strength only by the end of summer.

The BA.5 surge has taken more than 9000 lives, official statistics show. The real toll may be higher, at 15 000-25 000, as calculated by Aleksey Raksha, an independent Russian demographer. This death toll is 3-5 times larger than the cumulative number of deaths from BA.5 in the UK.5 And it is similar in magnitude to the cumulative losses of Russian troops in Ukraine (exact figures are not publicly available, but estimates range from 6000, as based on official data from the Russian Ministry of Defence, to 54 000, as claimed by the General Staff of the Armed Forces of Ukraine).

Meanwhile, the next wave is already rising in Europe. The new omicron subvariants BF.7, BQ.1, and BQ1.1 have already been detected in Russia. The question is, will they be noticed?