Is covid-19 settling into a pattern?

SARS-CoV-2 is here to stay, with an increasing array of questions for science and medicine. In the first of a new series on Covid Unanswered Questions, The BMJ asks about our current understanding of waves and variants—and what they might mean for “living with the virus”

Is covid settling into a pattern?

“It appears that there are two to three waves a year, each caused by new variants,” says Atsushi Sakuraba, professor of medicine at the University of Chicago, USA. “Considering the nature of SARS-CoV-2, which is an RNA virus that mutates over time, this pattern is likely to stay.”

Each new variant’s dominance—usually from increased transmissibility or from mutations that help it to partially evade immunity and allow reinfection—comes from outcompeting existing variants and brings a surge of infections, aided by the easing of restrictions and waning vaccine immunity (fig 1). 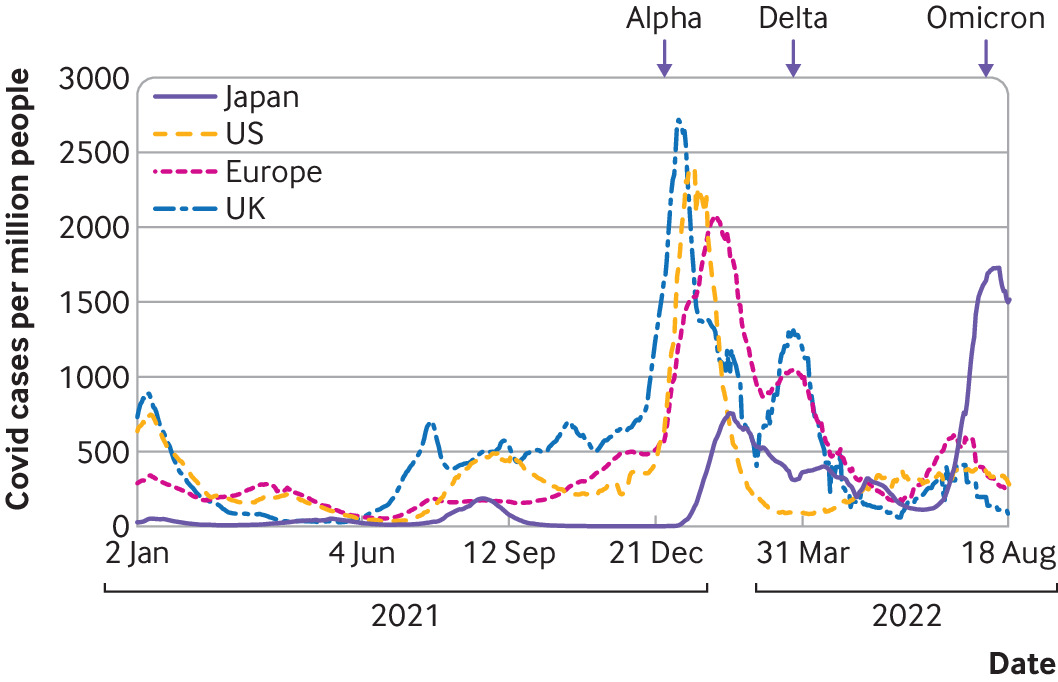 Credit: Our World in Data

Lawrence Young, a virologist at the University of Warwick, UK, says, “We’re getting plateaus [peaks in case numbers] in between waves of infection, and the set point for those plateaus is a little bit higher each time, as the virus is changing.

“What we’re seeing at the moment is essentially the evolution of this virus in real time. We’re seeing these waves of infection with the different variants that just outcompete their predecessors.”

Are there regional patterns?

Some countries, such as New Zealand and Japan, have seen extremely sharp rises followed by sharp falls, when compared with other countries. These countries maintained comparatively very low numbers of infections thanks to a combination of strong policies, such as border closures, and high public adherence to measures for over a year before easing restrictions.

What mattered for those countries, says Joël Mossong, an epidemiologist at the Luxembourg Health Directorate, is not the new variants’ transmissibility as such but rather the state of population immunity.

“The reason why they sweep through is that they can really find people who have not been infected yet or who have been infected a long time ago,” he explains. “And they’re able to avoid or to evade the pre-existing immunity, either from vaccine or from previous infection, that was based on a previous variant.” All existing covid-19 vaccines are based on the original “wild-type” strain.

Will these patterns continue?

Young says, “As long as these variants keep being selected for increased transmissibility and immune evasion, particularly to the current vaccine protection, then we’re going to continue to see this type of pattern around the world. But it does depend on the variants and where you are.”

We can expect the wave pattern to continue over the next few years, he adds, unless we become more proactive about mitigations or our vaccines adapt.

Mossong says, “It looks like there are [new] variants sweeping through every three months . . . but it also looks like each successive wave is going to be smaller. It really seems to me that the virus is mopping up any pockets of susceptibility that are still around in the population.”

There’s a lot of immunity in the population now, he says, since most people have been vaccinated, but also resulting from “natural” virus exposure, since most people have also been infected previously. “Infectious diseases are very much like bushfires,” he says. “People are the equivalent of trees that haven’t been burned yet.”

What happened to the previous variants—and could they come back?

Sakuraba explains, “The old variants are still detected in small numbers but likely won’t become dominant, as the majority of the world are now vaccinated with vaccines that are effective against those.”

With the supremacy of the omicron family (fig 2), it’s unlikely that any previously dominant variant would be able to re-enter the ring. Mossong says that any previous variant would have a hard time re-establishing dominance or even getting a foothold. “It’s vaccines, really, that killed them,” he says. “That really built up a big immunity against them. I think it’s unlikely that one of these will come back.” 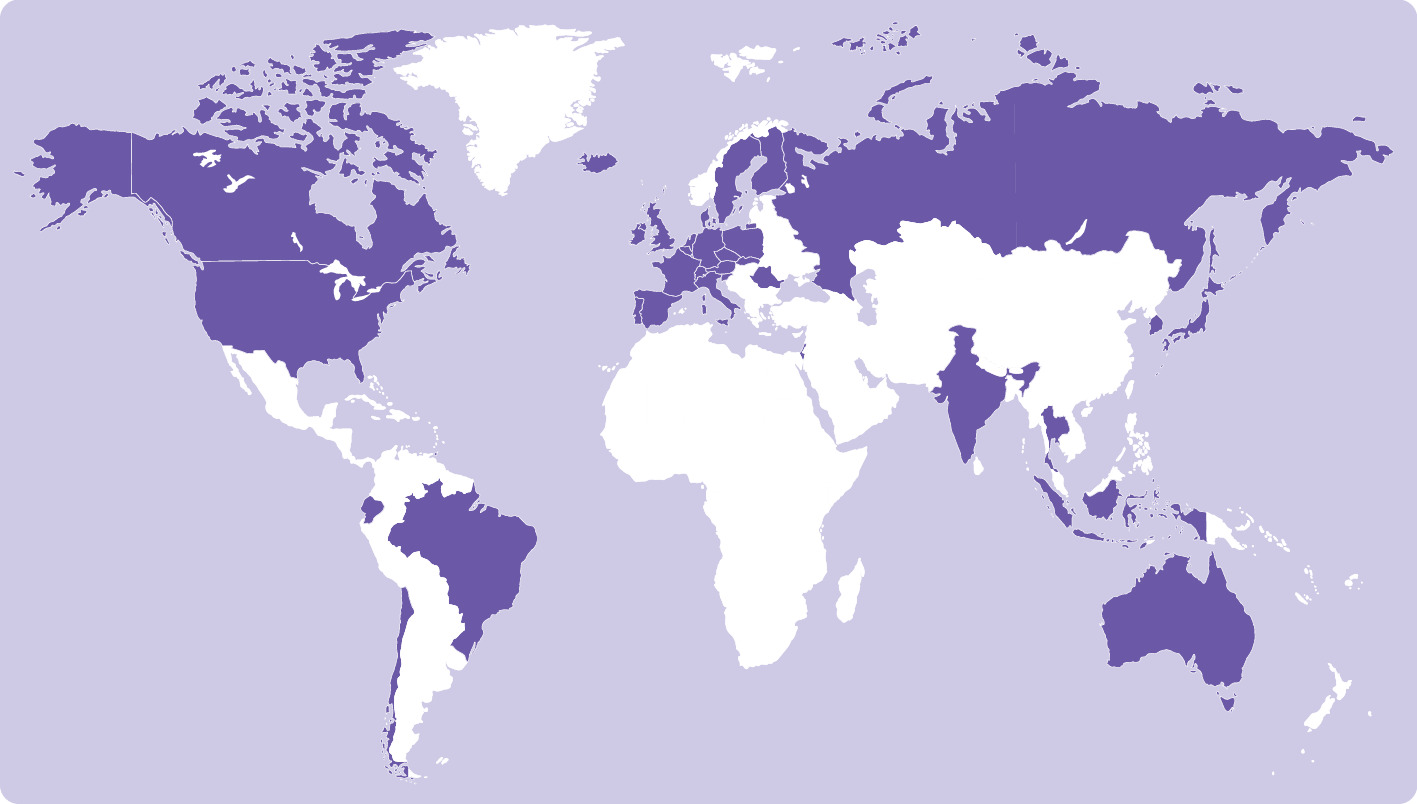 Share of SARS-CoV-2 sequences that are the omicron variant (dark shaded areas), 15 August 2022

Credit: Our World in Data

Eleanor Riley, professor of immunology and infectious disease at the University of Edinburgh, UK, says that in hindsight “the alpha and beta variants really weren’t that infectious—although they seemed like a lot of infections at the time—compared with how easily omicron, and delta before it, spread.” At that time there were no vaccines or waning immunity.

“In order to come back and take over from omicron, they would have to be really totally different immunologically,” she tells The BMJ. “And I’m not sure that would be enough, immunologically, to counteract the fact that they’re actually not that infectious compared with the two out in front.”

One exception could be people who are immunocompromised or immunosuppressed, who could be harbouring multiple infections from different variants or sub-lineages, say Young and Mossong. That could be an evolutionary opportunity for swapping genes—for instance, there were fears in the media about “deltacron” in March 2022.1

A preprint posted on 2 July from researchers at Yale University, USA, described a 60 year old immunocompromised patient harbouring a prior variant, B.1.517, since November 2020.2 The researchers say that it evolved at twice the rate of wild-type SARS-CoV-2, thanks to the patient’s lack of immunity. The lead author, Nathan Grubaugh, told the journal Science that some of the viruses circulating in the patient today might be qualified as new variants if they were found in the community.

Will all future variants come from omicron?

“BA.5 is probably the worst version of the virus we’ve seen so far in terms of its infectiousness and its ability for immune escape,” says Young, although he thinks that it will probably reach its peak “very soon . . . Then I anticipate that we’ll have a plateau, and then there’ll be another variant—omicron or not, we don’t know—that pops up over the September-October period.

“The biggest fear is that something’s going to come from the leftfield [as the existing variants and subvariants look to outcompete each other]: another non-omicron variant that is even better adapted to infection and to immune evasion.”

This will depend on where a new variant emerges and what evolutionary advantages it has, in terms of speed of transmission and immune evasion, as well as the immune situation of the immediate population it finds itself in.

To cite some past examples, one study this year suggested that in New York City the gamma variant spread better in some areas—some of which had been hit hard in the first wave of the pandemic—with higher levels of pre-existing immunity.4 And BA.5 drove up hospital admissions in Portugal (which has high levels of vaccination but also high numbers of elderly people) but not in South Africa. This may be due to a younger demographic but also to prior immunity from high exposure to SARS-CoV-2 early in the pandemic.5

Do you have a “Covid Unanswered Question”? Email mlooi@bmj.com, and we’ll try to cover it in a future instalment of this series.

See other articles in issue 8352