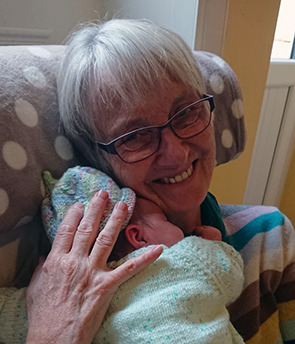 Elizabeth Mary Gunn’s parents worked as teachers in Northern Rhodesia, now Zambia, and moved to New Zealand and subsequently south west England, when she and her sister were children. Mary had juvenile rheumatoid arthritis as a child and young adult, and this played a part in leading her into medicine as a career. She was keenly interested in paediatrics but decided on general practice. She spent three years working with her husband as a district medical officer in rural Malawi in the 1980s, then worked as a GP in Galloway and the Scottish Borders. She combined work in general practice and homeopathy for many years. Her clinical work was curtailed by secondary breast cancer, with which she lived for 12 years.

Mary loved travelling and continued this throughout her life. Her illness and deep concerns about suffering in her patients and the world led her to explore Tibetan Buddhism over many years. She developed a profound understanding of the principles and practices of Buddhism. Some of this is reflected in her book, Well, which is about navigating uncertain and fearful times, published in 2017. A further volume, Handshake, will be published this year by Swirling Leaf Press.

Mary had a very wide circle of friends and had a unique combination of sparkle, warmth, high intelligence, and humour, as well as an ability to engage all sorts of people. Sometimes she was called Mary Gigglies. Her irrepressible energy and creativity showed itself in many ways; she wrote poetry, drew, and painted; sewed clothes and beautiful curtains for family and friends; and loved cooking for the many visitors who sought her out.

She leaves her sister, Donella; her husband, John; two children; and four grandchildren.

See other articles in issue 8351