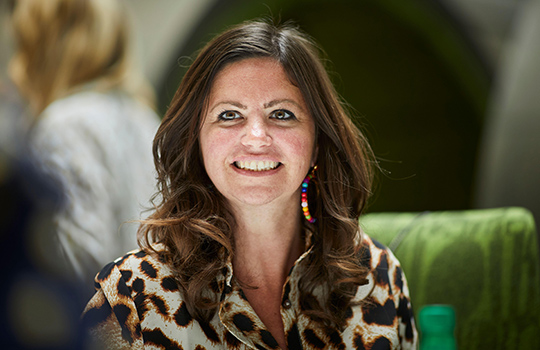 Deborah James (later Dame Deborah) was a deputy head teacher aged 35 when she found in 2016 that she had stage three bowel cancer.

She turned her diagnosis into an “incredible force for good,” according to Genevieve Edwards, chief executive of Bowel Cancer UK, of which James was patron. “Her tireless campaigning to raise awareness of bowel cancer symptoms will have saved countless lives,” Edwards said.

James candidly logged the course of her disease to her Instagram audience which climbed from 300 000 to 500 000 followers towards the end of her life.

Bowel Cancer UK says that James has “forever changed the way people talk about bowel cancer” through her openness and honesty about her diagnosis and experience of the disease. Her catchphrases included: “Check your poo—it might save your life.”

After conferring her damehood in May in her parents’ back garden in Woking, Surrey, the Duke of Cambridge tweeted: “Every now and then, someone captures the heart of the nation with their zest for life and tenacious desire to give back to society. @bowelbabe is one of those special people.”

Reaching millions of people through social media, TV, radio, and her bestselling book, F*** You Cancer: How to Face the Big C, Live your Life, and Still Be Yourself, James showed herself to be a talented writer and broadcaster. Her second and final book, How to Live When You Could Be Dead topped the Amazon UK bestsellers list on pre-orders alone. Her Bowelbabe fund has raised nearly £7m for charities, including Bowel Cancer UK, Cancer Research UK, the Institute of Cancer Research, and the Royal Marsden Cancer Charity.

Her regular output included a weekly online column in the Sun and the Radio 5 Live podcast You, Me, and the Big C, launched in 2018. Radio 5 Live controller Heidi Dawson said, “She was so funny with a blunt honesty. She had the most incredible energy, a magnetism that drew you towards her. The messages from the listeners show the incredibly special connections she made.”

Initially James co-hosted the show with breast cancer patient Rachel Bland, a Radio 5 Live newsreader, and Lauren Mahon, another breast cancer patient and founder of Girls v Cancer, an online community for cancer patients. When Bland died in 2018, James and Mahon continued as a duo, discussing down to earth topics like hair loss with celebrity guests. One of their hallmarks was humour; in 2018 James set out to de-stigmatise bowel cancer by dressing up in what she called “a poo suit” for bowel cancer awareness week.

James joins a long line of high profile patients who have generated disease awareness with publicity. The announcement in 1985 that US President Ronald Reagan had undergone bowel cancer surgery probably led to more global media coverage about the condition than any other development. Previously bowel cancer had been taboo. The Reagan story coincided with a sharp but transitory rise in public interest in bowel cancer, resulting in a corresponding increase in early screening, increased diagnosis of early stage disease, and a fall in advanced disease in 1986-87.

James announced in May that she had stopped active treatment and that she was at her parents’ home in Woking, Surrey, supported by her husband, Sebastien, and their two children Hugo, 14, and Eloise, 12. She wrote, “The message I never wanted to write. We have tried everything, but my body simply isn’t playing ball.”

She also made an emotional and teary final appearance on her podcast in an episode entitled Deborah James’ Last Dance. “Thank you guys for everything, for being our partners in crime in the club that you never wanted to be a part of,” she said. “I suppose that’s it from me. It’s a very sad thing to say, but I am pleased that I have got to the point where I can say it and we’ll see each other again somewhere, somehow, dancing. Oh, and also: check your poo. I can’t leave on any other words.”