Motor and/or vocal tics are relatively common, occurring in about 1% of children of school age. They are also a characteristic of Tourette’s syndrome, a neurodevelopmental disorder in which multiple motor tics and one or more vocal tics have been present for more than a year. Tic disorders are often undiagnosed or misdiagnosed.1 This article outlines a general approach for primary care clinicians to assess a child who has a tic. We highlight the different considerations depending on the age of the child and the presenting symptoms.

Tics vary in type, frequency, and severity over time. They are usually preceded by a premonitory sensation in the form of a stretch/tension or tingling at the site of the tic or a mental urge which is relieved by performing the tic.2 Typically, the relief lasts for a short period and the urge returns. Tics can be voluntarily suppressed for seconds to minutes or several hours (eg, some children may suppress them at school) and this may be followed by a rebound. Frequency of tics is usually reduced when the child is relaxed, focused, or when distracted, such as while playing sports or a musical instrument. Tics are typically made worse by stress, anxiety, lack of sleep, or tiredness.

Parents may seek medical advice if the tics are bothersome, cause unwanted attention or embarrassment because of the frequency, type, site, and nature of tics, or because they are causing pain (eg, because of repeated movements). Parents may also seek advice about the significance or causes of the tics. An initial assessment might aim to:

How to differentiate tics from stereotypies

A first presentation of a child with a tic

A 7 year old boy, Tom, is brought to the general practitioner (GP). His mother reports that recently he has had a dry cough and has been twitching his nose. She wonders if this is caused by an allergy. Last year Tom saw an ophthalmologist for excessive blinking but nothing abnormal was found.

Potential diagnoses here include a primary tic disorder (box 1),4 transient developmental tics, mannerisms, or stereotypies. Seek a detailed description of the tic characteristics (table 1) and presence of any previous or current tics or family history. Ask about the type, nature, frequency, intensity, and impact of tics, noting that they can be motor or vocal and may be simple or complex (table 2). Involuntary swearing (coprolalia) is present in 20-30% of people with confirmed Tourette’s syndrome. Depending on the first symptom, families may be concerned about a range of possible causes, including stress, allergies, conditions of the eye, nose, or throat, and more recently covid-19.

Up to 20% of children have motor tics as part of their development, but these usually last for only a few weeks to months.5 In Tom’s case, his parents report excessive blinking (a possible motor tic) a year ago, and now nose twitching, another motor tic, as well as cough, a likely vocal tic, so that a diagnosis of Tourette’s syndrome should be considered. Tourette’s syndrome is three to four times more common in boys; tics typically start at the age of 6-7.6

Tourette’s syndrome is a clinical diagnosis.7 Patients and their families find it helpful to have a clear diagnosis, along with information about the putative cause, likely prognosis, management options,8 and associated comorbidities.9 As the tics are not causing any problems for Tom, no active intervention is needed at present, and the family can be advised that it is best to ignore the tics, as drawing attention to them (including asking Tom to stop) may make symptoms worse. Direct parents and carers to websites that provide accurate and reliable information. Families may also find it helpful to know that many famous and successful people have had Tourette’s syndrome.10

Sam presents with his mum to the GP clinic. His mum says that Sam is having significant problems at school and was recently assessed by the learning support team for poor attention and disruptive behaviours, including pulling faces at the teacher and disturbing the class by making silly noises. Sam also complains that he is not able to do some of the sums in his maths class as he has to convert everything into even numbers because he is not able to work with odd numbers.

In around 90% of people attending specialist clinics, Tourette’s syndrome is associated with comorbid conditions such as ADHD and (less commonly) autism spectrum disorder (ASD).6 It is also associated with OCD and OCB (eg, obsession with specific numbers or symmetry, “evening up” behaviours such as action on one side and then the other to make it “even,” or doing things until it feels “just right” that are commonly associated with tics but often do not reach the threshold of clinical disorder diagnosis because of not fulfilling the distress and dysfunction criteria). Ask about tics and these comorbid conditions in the patient and in family members.11 Certain genes have been implicated in Tourette’s syndrome and in its links to ADHD and OCD.12

People with Tourette’s syndrome may also have anxiety, depression, problems with sleep, self-injurious behaviours, anger or rage, poor impulse control and behavioural disinhibition, disruptive disorders, and learning disorders (fig 1).5 When behavioural or mental health difficulties are the presenting complaints, tics may be missed. In Sam’s case, at times the comorbidities are more problematic and will need more intervention than tics themselves.13 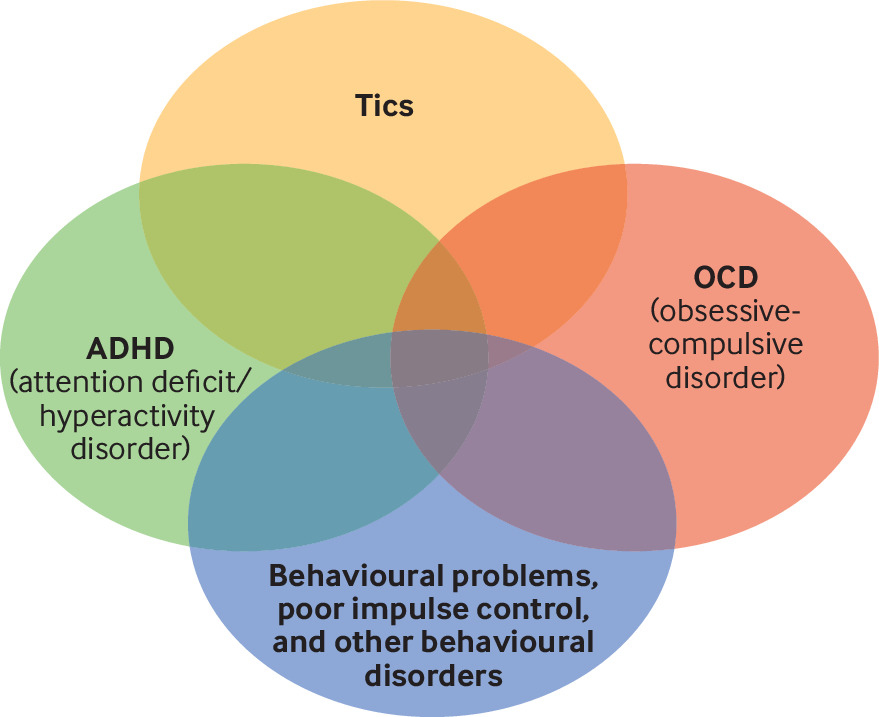 Figure 2 details the general principles for managing tics. Provide information and resources to parents and school, explaining that tics are outside the child’s control. Box 2 offers some helpful strategies to minimise the negative effects of tics on a young person’s life. Simple tics causing no distress or dysfunction might benefit from watchful waiting, but if pain (caused by repeated movements), distress, or dysfunction occurs, empirically supported drug14 and behavioural interventions15 are available.16 Consider referring to a specialist (eg, paediatrician, child psychiatrist) if the patient has symptoms, whether from comorbidities or from tics, that remain problematic despite initial management. Refer to a neurologist for sudden-onset chorea, ataxia, or dystonia; to a mental health specialist for comorbidities including anxiety, mood, or obsessive compulsive disorder; or to a neurodevelopmental specialist for ADHD or autism. 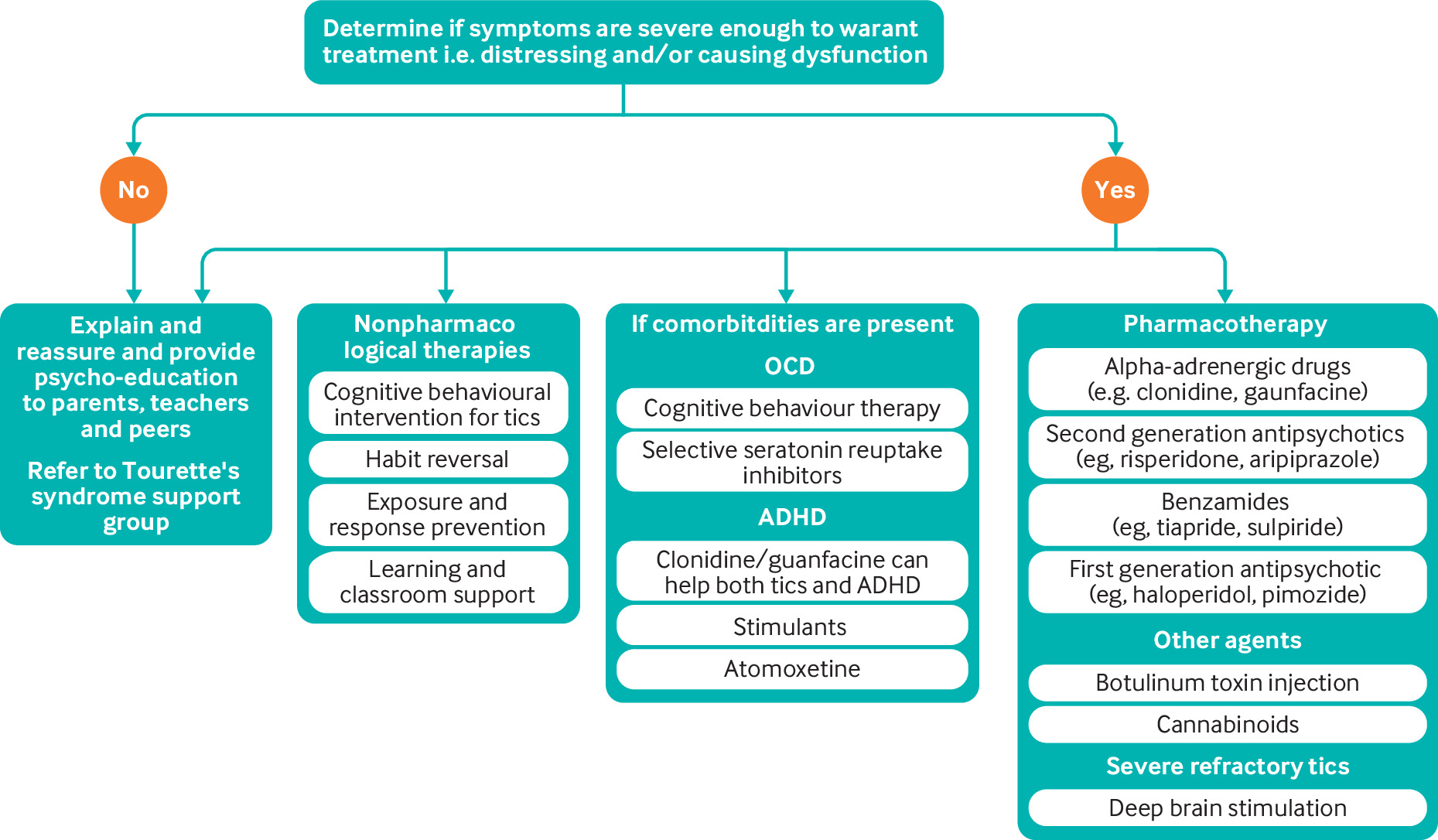 Management for a patient with a tic disorder

Tics typically reduce by late adolescence or early adulthood, with remission in 30-50%. Around 20% have moderate to severe tics,17 and 5% experience debilitating or refractory tics in adulthood.18

My first memory of a tic was repeated grunting in my primary school classroom, much to the irritation of my teacher and amusement of my classmates. Some weeks later, I saw my father wrinkle up his nose in response to an unpleasant smell. My grunting gave way to nose wrinkling. Over subsequent months and years, I acquired new tics and lost earlier ones. They became more complex, often combining grunting with other movements, and mainly affecting my face, neck, shoulders, and arms. Inevitably, my nickname at school was “Twitch.” Although I saw several doctors and a child psychologist, my condition remained undiagnosed until I was at university. In my third year of medicine, I asked our psychiatry lecturer if he could explain the cause of my tics. He referred me to a neurologist, and it was an enormous relief when I received a diagnosis of Tourette’s syndrome. At last I had a reason, and a way of talking about my symptoms.

After a brief and unsuccessful trial of medication, I learned to live with Tourette’s syndrome. At times the tics are socially embarrassing, but they have also been the source of shared amusement. I have never experienced coprolalia but I am aware of a temptation to copy the verbal and non-verbal tics of others. Occasionally, I have left the room to avoid “catching” a tic. I am now 68. My tendency to tic has reduced markedly over the last decade or so, but is still present when I feel stressed. Fatigue, study, and mental concentration can exacerbate their frequency. Listening to music and taking part in physical activity both reduce the urge. The tics are part of who I am—not particularly welcome—but as much a part of my makeup as my eye colour.

How this article was created

VE developed one of the case vignettes to illustrate early symptom presentation and the subsequent development of comorbidities, based on an anonymised case from clinical practice. TU provided a personal account.

TU has lived with Tourette’s syndrome for more than 60 years. The manuscript was discussed with executives from the Tourette Syndrome Association Australia and in particular Robyn Latimer (RL), who reviewed the manuscript and whose views helped shape the section on management strategies to assist young people with tics.

See other articles in issue 8329