Cities are a crucial concern in dealing with climate change because an increasing proportion of the global population lives in urban areas. The world’s urban population is expected to grow from 4.2 billion in 2018 to 6.7 billion by 2050, including a burgeoning ageing population.1 Meanwhile, because of human induced climate change, the frequency of extreme climate events is increasing worldwide.2 Climate change, urbanisation, and an ageing population create a “perfect storm” of risks to global health, particularly from urban heat.

If we do nothing, current temperature extremes are projected to be exceeded across much of the Earth by 2100.3 The more extreme that heat events are, the greater the potential to push ecosystems and communities beyond their ability to cope.24 Whether we can achieve sustainable development depends on our actions now and over the next few years. As heat related health risks are particularly severe in cities, it is imperative to assess these risks and respond effectively.

Anthropogenic emissions of greenhouse gases are altering our climate system, and more frequent and intense heat related disasters such as heatwaves, droughts, and wildfires have already led to increased mortality and morbidity.245 For example, the number of excess deaths during the 2003 heatwave in Europe was estimated to be 70 000, including around 15 000 people in France alone.6 The 2018 Japan heatwaves resulted in over 20 000 hospital admissions related to heat stroke, mostly in people aged 65 years or older.7

Raised ozone levels due to higher temperatures and air pollutants from burning fossil fuels also increase cardiorespiratory mortality and morbidity, possibly by increasing cholesterol levels and systemic inflammation.89 Rising incidence of kidney disease and mental illness associated with exposure to urban heat are other devastating effects.245 Additionally, increasing urban heat is expected to reduce labour productivity and outdoor working capacity, particularly in the tropics and subtropics. The health effects of extreme heat events have the potential to overwhelm health systems, which in turn may have further negative health consequences, particularly in developing countries.7

The nature and magnitude of health risks depends on the hazards created by a changing climate, and the exposure and sensitivity of individuals and communities. For instance, an international study examined the effects of greenhouse gas emissions, population growth, and adaptation on heatwave related mortality.10 Compared with 1971–2020, the predicted rise in mortality in 2031–80 varied from 2000% in Colombia to 150% in Moldova under the highest emissions and high variant population scenario, without any adaptation. For a lower emissions scenario and adaptation, the mortality increase would be much smaller.

Urban areas are generally warmer than adjacent rural and suburban areas (fig 1). This phenomenon is known as the urban health island effect.11 For example, while the average air temperature in the centre of a large city like London, can be 4°C higher than outer rural areas, this differential can reach 10°C during extreme heat events, with the largest differential at night.1213 Urban heat islands are caused by use of materials such as metal, concrete, and brick that are highly efficient at absorbing and storing heat from the sun, a lack of vegetation limiting the cooling effect of evaporation from the soil and plant transpiration (evapotranspiration), and trapping of heat released by human activities (eg, transport, lighting, air conditioning) in “urban street canyons.”14 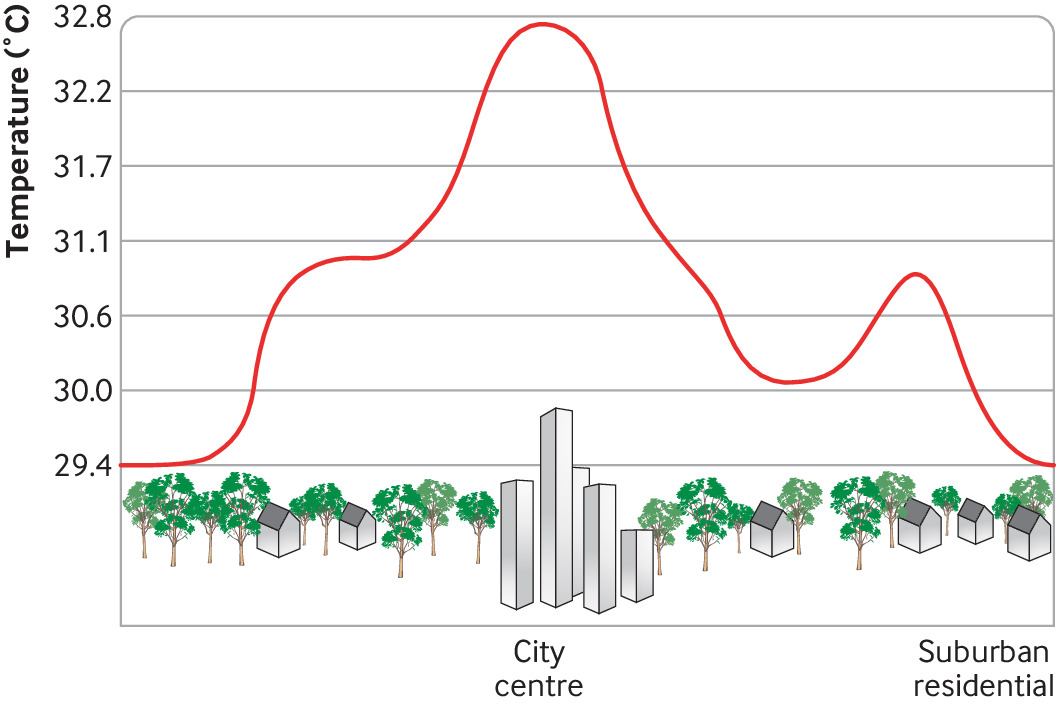 Urban heat islands can affect health directly and indirectly.15 Studies have found that the increased heat has a direct effect on mortality and morbidity, particularly during extreme heat events.1617 One study reported that the heat island effect accounted for over 50% of the total heat related mortality in the West Midlands, UK, during the 2003 heatwave.18 Another study indicated that vulnerable populations (such as elderly people and those on low incomes) are often concentrated in areas where the heat island effect is highest.19 Urban heat islands can also affect rainfall patterns and worsen air pollution, exacerbating health harms.2021 Furthermore, climate change and the urban heat island effect are co-evolving factors that could amplify future heat effects.2223 By 2100, heat related mortality in Europe is expected to increase by about 50 times because of climate change augmented by urban expansion.22

However, vulnerability to heat is not equal for all city residents.242627 Risk is increased by degree of exposure to heat (eg, living in heat island neighbourhoods, lack of tree cover, lack of air conditioning, living on upper floors of buildings, and working outdoors), susceptibility (young and old people and those with low education attainment, ill health, or lacking adequate healthcare), social isolation, and a lack of material resources.28 Understanding which individuals and neighbourhoods are most vulnerable can help guide local adaptation efforts. Vulnerability maps enable health officials and policy makers to identify “hotspots” within cities and target interventions to places and people most in need.293031

We urgently need to evaluate the effect of urban characteristics on temperature-health relationships because urban populations experience higher heat risks, particularly in a warming climate. An international study found that the effects of heat on mortality were higher in cities with a higher level of inequality, higher exposure to air pollution, fewer green spaces, and lower availability of health services.32 These findings can inform public health interventions and urban planning.

The health risks of heat can be mitigated by reducing the accumulation of heat and applying cooling techniques. Possible strategies include altering individual behaviours, improving building design and city planning, and developing heat health warning systems.

At the individual level, light clothing, water sprays, and cool showers can help.33 Although air conditioning can reduce mortality and morbidity, it can exacerbate the urban heat island effect by dissipating heat outdoors. It is also often unavailable to vulnerable populations, and can be unreliable if power outages occur during hot days.13 Structural adaptation is therefore needed.

Four general principles have been identified to guide building and city design to reduce the heat island effect (box 1).34Table 1 lists some measures that can be used to implement these principles.35

How to minimise heat harms when building cities*

Surface reflectivity (albedo) in urban areas is one of the most important determinants of the magnitude of the heat island effect. Increasing reflectivity, for example by painting surfaces white, can reduce urban air temperatures by 1–3.5°C.36 One study found that in combination, increasing the albedo and the vegetated area can lead to a 48% reduction in annual emergency service calls.37 Another study reported that this combination could offset 40–99% of the projected increase in heat related mortality arising from climate change.38

Urban greening as a heat mitigation strategy, including urban forests, parks, and green walls, has received much attention.3940 Through enhancing evapotranspiration rates and shading, greening can achieve localised cooling within 2–3 m from the surface.4142 The cooling effect of green roofs is less as they are above street level.43

Urban design will not eliminate the dangers from extreme heat events. Heat health warning systems have thus emerged as a key tool for managing urban heat risk,44 as they can warn authorities tasked with intervention strategies about impending heat hazard.4546 Use of heat health warning systems in Philadelphia, US, and Shanghai, China, has been associated with lower mortality rates.4647 Alerts need to be linked to heat-health action plans that activate response measures (eg, opening cooling centres, potable water stations, outreach to vulnerable populations) and heat related health education.48

Although developed countries are able to use a range of approaches to manage urban heat, options are potentially limited in developing countries,4950 and the benefits of adaptation strategies may be moderated by socioeconomic and cultural factors.51 Raising awareness of how heat affects different groups, targeting high risk communities, and more inclusive planning processes may help improve equity.

Although cities have been centres of innovation and growth, and the engines of socioeconomic development, urban dwellers are vulnerable to the combined effects of urban heat islands and increasing heat from climate change.52 Children born in 2020 will experience a twofold to sevenfold increase in extreme events, particularly heat waves, compared with people born in 1960, under current climate policy pledges.53 This highlights the severe threat to young generations and calls for drastic emission reductions to safeguard their future. Research and policies need to focus on increasing climate ambition, curbing emissions, building resilience, and advancing science.

Climate change is the biggest threat facing humanity over the long run, although the covid-19 pandemic is currently the most urgent crisis. Mitigating climate heating by reducing greenhouse gas emissions is a public health priority.54 All nations need to boost their climate ambition, and its momentum should be monitored and enhanced through each country agreeing their nationally determined contributions to reducing emissions this year. The Paris Agreement requires countries to set out plans for reaching nationally determined contributions every five years, and these are legally binding commitments.55

The Paris Agreement set a goal to limit warming to 1.5–2°C above pre-industrial levels. Regrettably, climate action has since stalled, making drastic reduction in greenhouse gas emissions imperative. Climate change will shift temperature distribution, both the extremes and the mean, towards a warmer world and increased heat health risks. Swift and decisive actions are needed to mitigate urban heat and protect population health.

Better communication channels between government agencies, research organisations, non-governmental organisations, and the general public should be developed. Scientists and policy makers must collaborate in projects to answer specific policy oriented research questions. Climate related health issues are a matter for all government departments, and the concept of “health for all” should be embraced in decision making processes in the environment, urban planning, energy, transport, and public health sectors.

The United Nations 2030 Agenda for Sustainable Development and the Paris Agreement aim to achieve a resilient, equitable, and prosperous future for all.56 Policy makers may have less time to respond to climate effects than previously thought, given the recent acceleration of climate change.57 If we continue as we are today, by 2100, many cities will experience average temperatures that are 4–7°C higher in the hottest months, relative to 1988–2017.52 All cities need adaptation plans (including climate sensitive urban design, heat health warning systems, and heat action plans) to reduce and prevent the harms of urban heat.

In light of the covid-19 pandemic, cities should rethink their strategies for protecting residents during heat events. For example, what is the role of cooling centres when social distancing is necessary? Surveillance of heat related health risks needs to be strengthened. Long term surveillance data are critical for estimating the health consequences of heat exposure and evaluating the effectiveness of adaptation strategies. Implementation studies should be conducted to identify the best adaptation strategies. For example, the use of air conditioners can reduce heat stress but increases greenhouse gas emissions, and there may be better ways to handle extreme heat. Reducing heat related health inequalities within urban areas should also be part of future urban policy.

The scientific community needs to advance the science of urban heat and engage government and the public in doing so. Transdisciplinary and cross-sectoral collaboration is required to reduce uncertainties in decision making and evaluate the effectiveness of adaptation and mitigation strategies. Funders need to increase their investment in transdisciplinary and collaborative research to better understand the health risks of heat exposure and related climate action priorities.

We urgently need to stabilise the climate by reducing greenhouse gas emissions and adapt to those aspects of climate change that cannot be avoided. Climate action is imperative because climate change is already affecting our health, and the harms will increase over time. Medical professionals and urban policy makers have a key role in endeavours to mitigate the harms of heat, supported by robust science. Let’s act fast and decisively.

ST is supported by a grant from Shanghai Municipal Commission of Science and Technology (Project number 18411951600).

See other articles in issue 8312