Role of asymptomatic and pre-symptomatic infections in covid-19 pandemic

An asymptomatic case is one in which someone has laboratory confirmed SARS-CoV-2 infection but does not develop symptoms (ie, fever, dry cough, fatigue). Asymptomatic transmission refers to transmission of the virus from a person who did not develop disease symptoms.

According to the “iceberg” concept of infectious diseases, recognised infections often represent only the emerging tip of the iceberg, while infections without associated clinical disease comprise the invisible base of the iceberg below sea level. Disagreement exists about the proportion of asymptomatic and symptomatic SARS-CoV-2 infections. A series of systematic reviews and meta-analyses revealed that the proportion of people testing positive for covid-19 who never developed symptoms ranged from 8.44% (95% confidence interval 5.12% to 13.62%) to 39% (20.4% to 61.4%).56789 This variation may be explained by differences in definitions of asymptomatic cases, accuracy of testing methods, and duration of follow-up.

Our work in China showed that 76% of seropositive infections were associated with no symptoms. Findings were based on an antibody serosurvey in 34 857 participants from Wuhan in Hubei Province, the disease epicentre, and six other provinces in April 2020, after the initial epidemic wave was contained.10 A further study of 9702 randomly selected people in Wuhan found that 82% of 532 participants who tested positive for pan-immunoglobulins had been asymptomatic.11 Although antibody tests may have high false positive rates and overestimate the prevalence of asymptomatic infections, our findings from a relatively representative sample suggest that SARS-CoV-2 infection is largely asymptomatic. This highlights the importance of active case identification to detect cases that comprise the invisible portion of the SARS-CoV-2-positive population (submerged portion of the iceberg).

Asymptomatic infections are determined by the biological features of the virus, but the proportion of pre-symptomatic patients will vary depending on the capacity to rapidly diagnose infection. One meta-analysis estimated that 48.9% (31.6% to 66.2%) of people with SARS-CoV-2 infection identified while asymptomatic went on to develop symptoms.7 However, two other meta-analyses reported that the proportion of pre-symptomatic infections in included studies was too heterogeneous to combine.59

Asymptomatic and pre-symptomatic transmission of covid-19 can be inferred from epidemiological and virological data.12 The most important evidence comes from epidemiological studies focusing on contact tracing, which help directly determine whether infections arose in the close contacts of asymptomatic or pre-symptomatic cases, and to what extent it was observed. This enables calculation of the secondary attack rate, a measure of viral infectivity defined as the number of infections that occur within the incubation period among the total number of exposed contacts. Virological studies may be supportive by determining the presence or absence of viral RNA, quantifying viral loads, assessing RNA shedding, or isolating live viruses from asymptomatic and pre-symptomatic people.

A cluster of 42 people with symptomatic covid-19 diagnosed from 23 December 2020 and onward in Beijing’s Shunyi district was caused by an asymptomatic carrier from Indonesia, according to an epidemiological investigation and viral genome sequencing.13 This is not an isolated example. At least 12 of 33 local clusters of infections identified during April 2020 to June 2021 originated from people with no symptoms, according to data from the Chinese Centre for Disease Control and Prevention.

Importance of control and prevention

One model estimated that transmission from asymptomatic individuals accounts for over half of all covid-19 transmissions, after considering scenarios with multiple covid-19 infectious periods and varying rates of transmission from those who never displayed symptoms.15 Several prediction models have indicated that the identification and isolation of all infected individuals, including those who are asymptomatic, is important for controlling the spread of covid-19.161718 In a worst scenario of unmitigated growth, researchers estimated that testing asymptomatic people may identify the virus five to eight days earlier than it would be detected in symptomatic people, a significant difference. During the five day delay, disease prevalence would have the potential to increase 10-fold.18 Thus, in order to control the pandemic, the identification of asymptomatic infections is critical. One model estimated that if 45% of asymptomatic people could be identified and isolated, complete lockdown would not be needed.16

Identification of asymptomatic and pre-symptomatic infections is more feasible in low incidence setting, and becomes much more difficult after infection rates climb beyond small, isolated, pockets of community transmission. As such, it has considerable value for preventing outbreaks in previously unexposed communities or among the general population in settings where the virus has been eliminated and outbreaks become smaller and more easily contained.

The covid-19 response in China can be divided into two stages. The first stage began when the first case was reported in December 2019 and continued until Wuhan came out of lockdown on 8 April 2020. In total, 81 865 confirmed covid-19 cases were reported during this period. Generalised and broad reaching non-pharmaceutical interventions (eg, lockdown, self-quarantine, social distancing, mass screening of potential virus carriers, epidemiological investigation, early detection, early reporting, and early isolation) were helpful for interrupting chains of transmission and identifying clusters missed by surveillance systems. Although not the focus of the prevention and control strategy, asymptomatic infections were first collected separately on 28 January 2020.

Management of asymptomatic infections effectively suppressed covid-19 transmission after the Wuhan epidemic. Between 31 March 2020 and 8 August 2021, China reported 11 292 (including 6512 imported from overseas) new infections in asymptomatic people, 2215 of whom later developed symptoms, and 11 985 new symptomatic cases (fig 1). These data again show the importance of including asymptomatic infections when creating policies to control the spread of covid-19. If only cases with symptoms were reported and managed, nearly half of the infective cases would not have been controlled, and detection in over 15% of those with symptomatic covid-19 would have been delayed until after symptoms developed. 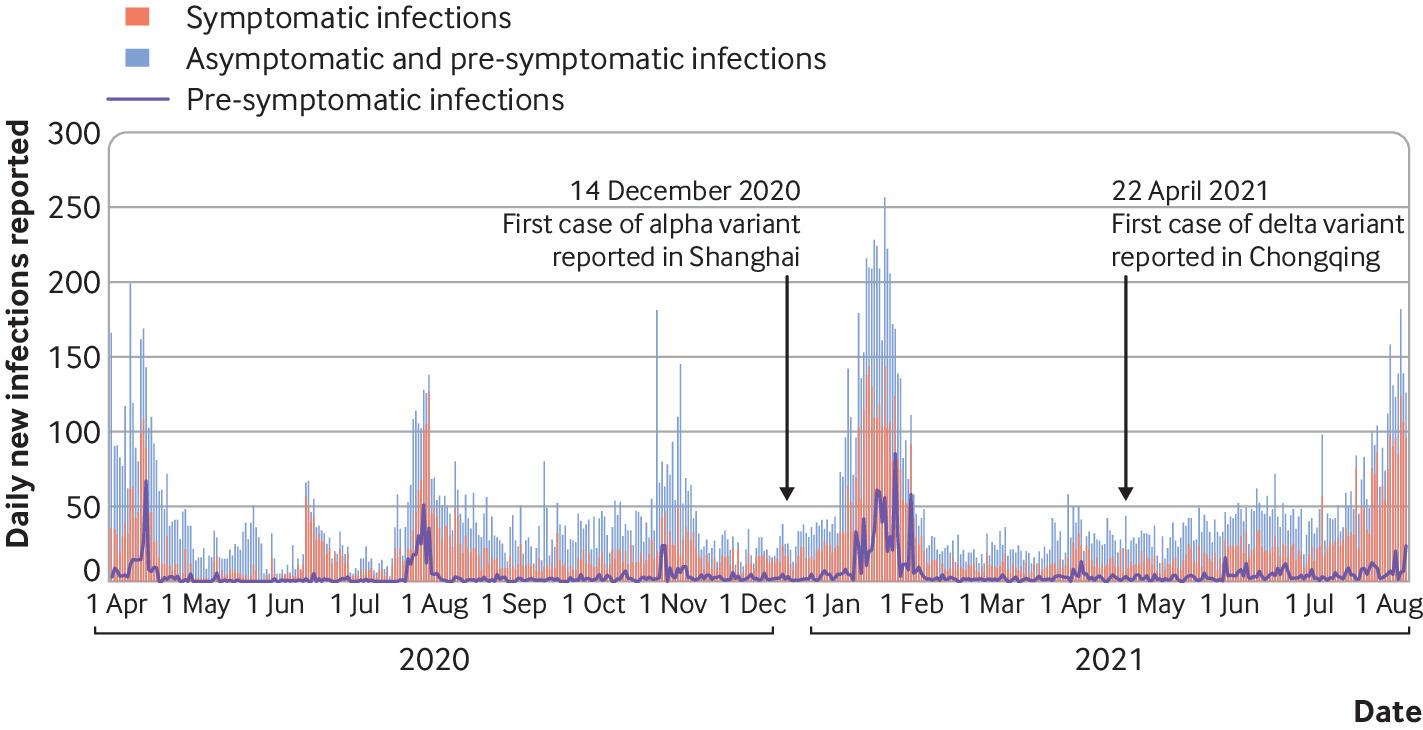 We thank Jin-Ling Tang for comments on an earlier draft of the manuscript. This analysis is supported by the National Natural Science Foundation of China (82041027), Peking University (PKU2020PKYZX002), and the China Medical Board (20-366). We thank Xuanming Hong, Zhiyu Wu, and Yutong Wang for their data extracting.