The end of the pandemic will not be televised

Dashboards of pandemic statistics have dominated screens and helped to track covid-19, but David Robertson and Peter Doshi explain why they might not be enough to define its end

As the year 2021 started, the covid-19 pandemic seemed to be receding. Discussions and predictions about “opening up,” a return to “normal,” and achieving herd immunity were in the air.1234 But for many, optimism receded as cases and deaths surged in India, Brazil, and elsewhere. Attention turned to SARS-CoV-2 virus variants—most recently, the emergence of omicron. Just as the end seemed to be on the horizon, it was interrupted by a foreboding that the pandemic could be a long way from over.56

Unlike any previous pandemic, covid-19 has been closely tracked through dashboards that aim to show the real time movement and effect of coronavirus; they track laboratory testing metrics, hospital and intensive care admissions, transmission rates, and, most recently, vaccine doses delivered. These dashboards—with their panels of numbers, statistics, epidemic curves, and heat maps—have dominated our televisions, computers, and smartphones. At their core is the allure of objectivity and data to grasp onto in the midst of uncertainty and fear. They have helped populations conceptualise a need for rapid containment and control,7 directing public sentiment, fuelling pressure for countermeasures, and maintaining an aura of emergency.7 They offer a sense of control when cases are coming down following certain countermeasures but can also drive a sense of helplessness and impending catastrophe when cases rise.

There is no universal definition of the epidemiological parameters of the end of a pandemic. By what metric, then, will we know that it is actually over? The World Health Organization declared the covid-19 pandemic, but who will tell us when it’s over?

The ubiquity of dashboards has helped create a sense that the pandemic will be over when the dashboard indicators all reach either zero (infections, cases, deaths) or 100 (percentage vaccinated). However, respiratory pandemics of the past century show that endings are not clear cut, and that pandemic closure is better understood as occurring with the resumption of social life, not the achievement of specific epidemiological targets.89

Respiratory pandemics of the past 130 years have been followed by annual seasonal waves fuelled by viral endemicity that typically continues until the next pandemic.10 What goes down comes back up, and the difficulty in dating the end of a pandemic is reflected in the historical and epidemiological literature. Although many scholars describe the “Spanish flu” as occurring across three waves from “1918 to 1919,” references to the “1918 to 1920” pandemic are also abundant, usually capturing what some call a “fourth wave.”11 Similarly, the mid-century “Asian flu” pandemic is generally described as a two wave event from 1957 to 1958, but others include a third wave, placing the pandemic’s end in 1959.12

This variability in dating historical pandemics highlights the imprecise nature of using death rates to determine, even retrospectively, the “end” of a pandemic and the start of the inter-pandemic period. For example, CDC today states that around 100 000 Americans died in each of the 1957 and 1968 influenza pandemics.1314 But these estimates include deaths taking place at times most would consider to be between pandemics (1957-1960 and 1968-1972, respectively).1516

The notion, reinforced by dashboards, that a pandemic ends when cases or deaths drop to zero is at odds with the historical evidence that substantial influenza morbidity and mortality continues to occur, season after season, between pandemics. In the inter-pandemic season of 1928-29, for example, over 100 000 excess deaths related to influenza A/H1N1 (the 1918 pandemic virus) are estimated to have occurred in the United States in a population one third the size of today’s.17 Furthermore, it can be challenging to discern which deaths can be attributed to the pandemic and which belong in the inter-pandemic period. The distinctions are not trivial, as excess mortality is the classic metric for assessing severity.1618 Inter-pandemic years have sometimes had higher death tolls than the pandemic seasons that followed, such as the 1946-47 season that preceded the 1957-58 pandemic season (fig 1).19 Hence, a pandemic’s end cannot be defined by the absence of excess deaths associated with the pandemic pathogen. 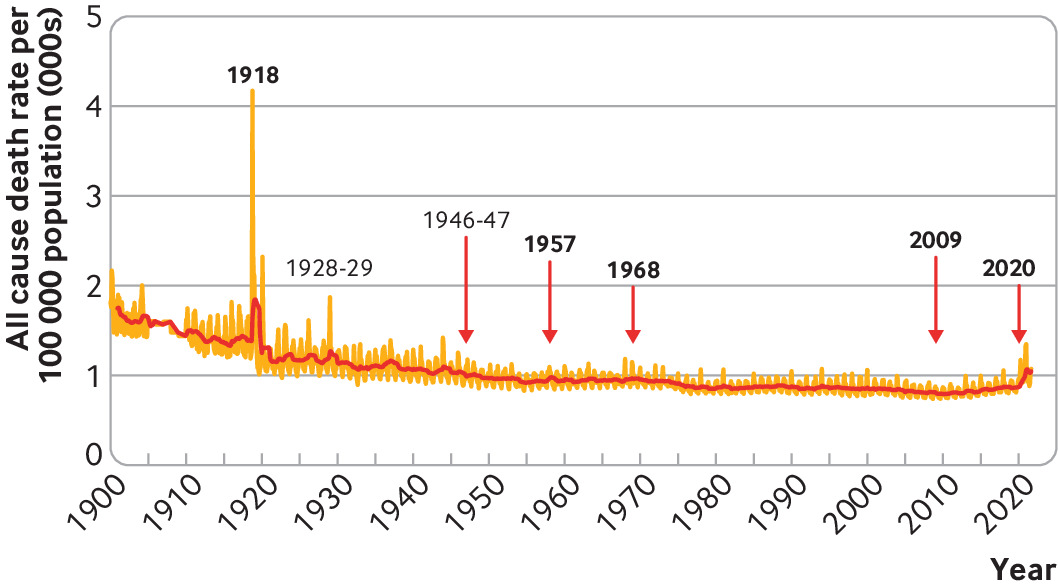 Monthly all cause death rate in the US, with arrows and bold dates indicating the beginning of pandemics, Jan 1900 to Sept 2021. The red line indicates a 12 month moving average. Note that from 1905 to 1909, the US Bureau of the Census provided only annual data (not monthly)

Interruption and resumption of social life

Another way we might declare the end of a pandemic is by considering the imposition and lifting of public health measures or restrictions. Measures used in previous pandemics have been more fleeting and less intrusive than those that have been used in covid-19. Even for the catastrophic Spanish flu—which killed three times more people per population in the US than covid-19, with an average age of death of 28 years20—lives returned to normal in a short time, perhaps only because there was no other option. In an era before the internet, food delivery apps, and video meetings, widespread and prolonged social distancing was simply not possible, a situation that remains the case today for many workers deemed “essential.” Indeed, a brief look at past pandemics in the US shows there is no fixed or deterministic relation between the pathogenicity of a virus and the intensity and longevity of public health interventions.

By comparison with previous pandemics, the covid-19 pandemic has produced unprecedented disruption to social life. People have long experienced the tragedy of sickness and unexpected death in pandemic and non-pandemic years, but the covid-19 pandemic is historically unique in the extent to which the interruption and resumption of social life has been so closely tied to epidemiological metrics (box 1).

In 1918, the pandemic’s first wave was mild and “attracted relatively little attention.”11 In response to the second wave, which “scorched its way around the globe,” some cities in the US implemented non-pharmaceutical interventions such as school closures and restrictions on public gatherings. Most countermeasures were relaxed within two to eight weeks, and the disruption of social life was relatively short lived.21

John Barry, a leading historian studying the 1918 pandemic, explained: “the whole thing was very swift.” Unlike covid-19, he said, “the stress was not continuous,” noting that many places experienced “several months of relative normalcy” between waves.22 New York and Chicago, the country’s two largest cities, never officially closed their schools despite Chicago schools reaching an absenteeism rate of nearly 50%. Where schools closed, they stayed shut for a median of four weeks (range 1-10 weeks).23

The 1957 “Asian flu” pandemic reached American shores around mid-year. Over the course of the next nine months, which included two waves in late 1957 and early 1958, an estimated “80 million Americans were bedridden with respiratory disease.”24 In the first wave about 60% of schoolchildren were sick, and rates of absenteeism reached 20-30%.25 Yet even when it was estimated that 40% of pupils in some New York schools were absent with influenza, the city’s superintendent of schools advised that there was “no cause for alarm and, on the advice of the Health Department, we have curtailed no activities.”26 By late October, college football matches around the country were being cancelled because many players were ill. Team managers scrambled, lining up last minute replacements, and ultimately no major contests were cancelled.27

As during the Spanish flu, the health effect of the new H2N2 virus did not end when the 1957 pandemic was “over.” In 1960, Newsweek reported that “without the fanfare of two years ago [the] Asian-flu virus was quietly picking off almost everyone it missed the first time around.”28 Early that year it was estimated that 20% of schoolchildren in Los Angeles— around 120 000 children—and over 15% of industrial workers were absent with influenza.28 Despite their size, these epidemiological impacts did not usher in a sense that society had slipped back into a pandemic.

A decade later another pandemic virus arrived that officials later estimated killed one million globally. But its impact on public health interventions and social life was minimal. Historian John Barry writes that for the US, “the episode was not significantly deadlier than a typical bad flu season,” noting that “few people who lived through it even knew it occurred.”29 Historian Mark Honigsbaum points out that “while at the height of the outbreak in December, 1968, the New York Times described the pandemic as “one of the worst in the nation’s history,” there were few school closures and businesses, for the most part, continued to operate as normal.”30

Dashboards—fighting or fuelling the pandemic?

While visual depictions of epidemics have existed for centuries,31 covid-19 is the first one in which real time dashboards have saturated and structured the public’s experience.

Some historians have observed that pandemics do not conclude when disease transmission ends “but rather when, in the attention of the general public and in the judgment of certain media and political elites who shape that attention, the disease ceases to be newsworthy.”8 Pandemic dashboards provide endless fuel, ensuring the constant newsworthiness of the covid-19 pandemic, even when the threat is low. In doing so, they might prolong the pandemic by curtailing a sense of closure or a return to pre-pandemic life.

Deactivating or disconnecting ourselves from the dashboards may be the single most powerful action towards ending the pandemic. This is not burying one’s head in the sand. Rather, it is recognising that no single or joint set of dashboard metrics can tell us when the pandemic is over.

The end of the pandemic will not be brought to you

History suggests that the end of the pandemic will not simply follow the attainment of herd immunity or an official declaration, but rather it will occur gradually and unevenly as societies cease to be all consumed by the pandemic’s shocking metrics. Pandemic ending is more of a question of lived experience, and thus is more of a sociological phenomenon than a biological one. And thus dashboards—which do not measure mental health, educational impact, and the denial of close social bonds—are not the tool that will tell us when the pandemic will end. Indeed, considering how societies have come to use dashboards, they may be a tool that helps prevent a return to normal. Pandemics—at least respiratory viral pandemics—simply do not end in a manner amenable to being displayed on dashboards. Far from a dramatic “end,” pandemics gradually fade as society adjusts to living with the new disease agent and social life returns to normal.

As an extraordinary period in which social life was upturned, the covid-19 pandemic will be over when we turn off our screens and decide that other issues are once again worthy of our attention. Unlike its beginning, the end of the pandemic will not be televised.

See other articles in issue 8319

PDF10 responses
Email to a friend