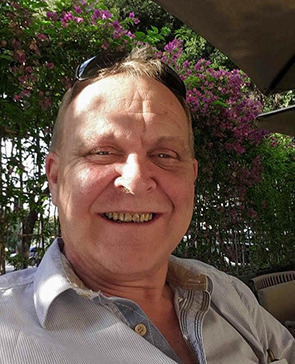 David Michael Roberts (“Mike”) died after a long illness bravely fought, at the age of 62. He was a warm, loving husband, father, stepfather, brother, and son.

He was born in St Asaph and brought up in Buckley in north Wales. He attended senior school at Elfed High School, Buckley, where he was head boy and from which he became the first to read medicine at university.

He studied medicine at Bristol University and subsequently continued his medical education in multiple medical posts in Bristol, Taunton, and Gloucestershire. He trained as a GP at Rosebank Surgery before becoming a partner at Rosebank Health, Gloucester, in 1989. That was merely the beginning of his immensely varied medical career, during which he became team doctor, then crowd doctor, for Gloucester Rugby Club in the early 1990s. The latter post he held for many years until recently. During his incredibly hardworking life, Mike developed extensive experience in health service management, serving as professional executive chair for West Gloucestershire Primary Care Trust (PCT), medical professional lead and responsible officer for Gloucestershire PCT, and as a member of Gloucestershire local medical committee. In 2014 he was appointed deputy medical director of Gloucestershire Care Services and later became its director.

Those are the bare bones of his wide impact on medical care in Gloucestershire, which do scant justice to his wonderful personality, which did so much to help those around him, patients and colleagues alike. He was highly effective and made a difference. Working with Mike could never be dull; he was always full of humour while displaying his self deprecating humility. His sense of the absurdity and fun alongside the seriousness in medicine was highly developed. He is already missed.

He had many non-medical interests. He had great pride in his tuba playing, having done so in the North Wales Youth Orchestra. He loved music in general as he did travel, reading, and cars. He would wish to be remembered as a huge Manchester City and Gloucester Rugby fan.

Most importantly he was a family man. He leaves his wife, Jules; four children; two stepchildren; and his mother, brother, first wife, and wider family.