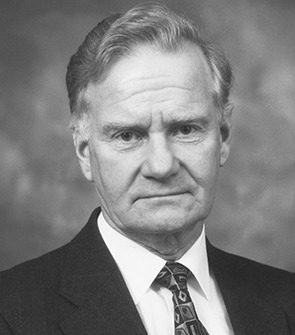 With a twinkle in his eye, George Weir Johnston liked to describe himself as a gunrunner who imported guns from Russia to Belfast at the height of the Troubles. The gun he personally went to Russia to collect was an SPTU stapling gun, the forerunner to the modern EEA stapling gun widely used for anastomosis in colorectal and oesophageal surgery. He pioneered its use for the stapled transection of the oesophagus, a significant advancement in the management of bleeding oesophageal varices.

George was the youngest of five sons born into a farming family. From a young age, he was determined to pursue a career in medicine rather than farming and graduated first in his year with honours from Queen’s University Belfast in 1956. His choice of surgery as a career was confirmed by a year as a resident in obstetrics and gynaecology in Middleton, Connecticut, USA. On returning to the UK, he trained in Belfast and St Bartholomew’s Hospital, London, under Sir Clifford Naunton Morgan. From his consultant appointment at the Royal Victoria Hospital, he successfully developed a research orientated, NHS surgical unit. He published over 100 peer reviewed articles, predominantly in the areas of oesophageal varices and duodenal ulcer surgery, becoming widely known in the UK and North America .

Alcohol related disease was highly prevalent in Northern Ireland. George devoted much of his working career as a surgeon to caring for these patients. He pioneered the use of injection sclerotherapy, using the rigid oesophagoscope, a technique soon adapted to flexible endoscopy, and he showed that stapled oesophageal transection gave superior results to portocaval shunting.

He was known all over Northern Ireland as the one surgeon who would take on the management of patients otherwise dying of complications of portal hypertension. In addition to his surgical and endoscopic skill in managing these patients, he also cared for them compassionately. For the majority, the underlying cause was alcohol. He knew how difficult it was for his patients to control their alcohol intake and believed passionately that only total abstinence had any hope of allowing sustained recovery. Hence his advice to his patients on discharge—humorously said but seriously meant—was: “Not even a wine gum!” It was a delight to him when they returned for review, able to say that they had followed his prescription.

Short of stature, he was affectionately known by colleagues as “Wee George”—a term used with endearment and respect. During his career, he saw the introduction of flexible endoscopes for the banding of varices and triple therapy for H pylori induced duodenal ulcers. It gave him great delight to hand over the management of these patients to the gastroenterologists, recognising that these were newer, better techniques offering better care for these patients.

More important to him than his career in surgery was his personal Christian faith. Yet he did not separate the two. He sought to live his Christian faith as much in the operating theatre as when relaxing with family. He enjoyed life, and right to his death, he would quote Psalm 16, “The lines have fallen for me in pleasant places.” He leaves his wife and four children.