The medical profession has faced criticism for its lack of diversity. This lack of diversity is harmful to healthcare workers12 and patients.3 Despite increases in the number of women admitted to medical schools in many countries, the proportion of under-represented minorities, including ethnic minorities,4 people with disabilities, and members of the LGBT+ community, remains low56 or unmeasured. Furthermore, despite equal numbers of men and women in medical school, women remain under-represented in leadership and decision making positions, suggesting that numerical equality alone will not improve the diversity in medical leadership.7 Intentional action by institutions is required. Mandating inclusion of women and people from under-represented minorities, a mechanism that has been successful in the political and corporate worlds, could be an effective means to diversify medical leadership.

Gender and ethnicity based disparities in medicine have been documented for over 30 years.8 Disparities in promotion,9 compensation,1011 discrimination,1112 and harassment13 that disadvantage women and racialised physicians have been found in every setting and specialty where such inequities have been studied.

Disparities are partly the results of barriers that disproportionately disadvantage women and under-represented minorities. The persistence of these barriers to entering leadership positions for female and under-represented minority doctors is likely to be both a cause and consequence of under-representation in leadership. The criteria for holding decision making roles are often based on years of experience, which disadvantage junior doctors, a group that includes more women and racialised physicians. This leads to over-representation of historically advantaged groups in leadership (fig 1). 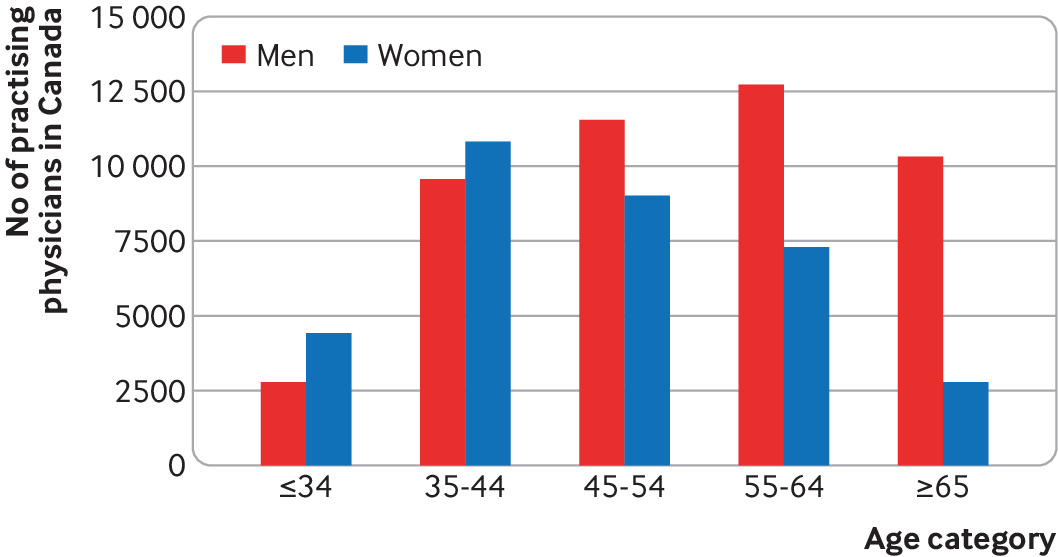 Demographic mismatch between age and sex among practising doctors in Canada, 2018. Men are more concentrated in older age categories and women in younger categories

However, our research shows that senior male doctors thought there was gender equity in their departments, while junior women reported frequent barriers to career progression, sexual and maternal harassment, and gender discrimination.14 These barriers often concentrate at the beginning of careers—a critical time for career trajectories and leadership attainment; early career is when remuneration is negotiated, career tracks are chosen, and, for many, childbearing occurs.14 Many physician leaders do not have direct experience of these barriers, and the presence of these barriers excludes the people who are best suited to address them from attaining leadership and decision making positions.

This demographic mismatch between the doctors in leadership roles and the physician workforce undermines a key principle of democratic governance—that decision makers share relevant characteristics with those affected by their decisions.

Numerical equality is not enough

Similar trends have been observed in the UK,7 the US,18 Japan,19 and Australia.20 Increasing the number of women in medical school has not reduced gender based disparities. Medical leadership must proactively tackle under-representation rather than assume that parity in the medical profession alone will reduce disparities over time.

To affect change, doctors from under-represented minorities must have leadership and decision making roles.7 One way to increase representation among medical leadership is quotas. Government quota policies exist in more than 130 countries,21 and corporate quotas have expanded considerably in Europe22 and the US.23 Quota policies are consistently effective for increasing diversity in government and business.2425262728 Beyond increasing the number of women elected, quotas improve women’s engagement in the political process, expand the breadth of policies that positively affect women and families,242529 reduce negative stereotypes about women’s leadership capabilities,30 decrease the gender gap in earnings,31 and increase the legitimacy of leadership.32

Existing quota policies fall into three types with differing target groups, thresholds, and sanctions (table 1).22 Mandatory gender quotas require a minimum threshold of the target group. Examples include electoral gender quotas in Europe, which mandate a minimum threshold of female candidates for each political party, and corporate gender quotas, which set targets for the boards of directors of publicly traded companies. Sanctions for non-compliance vary considerably, ranging from financial penalties to de-listing companies from the stock exchange.

In Europe, both electoral and corporate quotas focus on women; electoral quotas for ethnic minorities are more common in countries emerging from ethnic conflict. California has recently extended a corporate quota for women to include under-represented minorities, with large financial penalties for non-compliance.23

Voluntary quotas, sometimes called “soft” quotas, use incentives instead of sanctions. Examples include the Athena Scientific Women’s Academic Network programme in the UK, which, among other interventions, encourages inclusion of women in leadership roles through research funding,7 and the Mansfield certification programme—a prestigious, voluntary certification for American law firms that achieve prespecified diversity goals.36

The third approach, candidate quotas, requires a prespecified proportion of applicants to come from under-represented groups without mandating the proportion ultimately selected.40 An example is the Rooney rule, which originated in the National Football League in the US and requires businesses to interview a minimum number of women and minority applicants.39 Organisations should carefully consider the goals of the quota, their institutional and local culture, and expected barriers when selecting a quota design (table 1).

The deliberate exclusion and historical oppression by medical schools of women, ethnic minorities, and people with disabilities has contributed to their under-representation as students and practising physicians.1141 Intentional inclusion may be a natural remedy for these historical injustices. Careful design and thoughtful leadership can help avoid some of the criticisms of quota policies (table 1).

Opponents of quotas often invoke arguments about merit.212529 Critics equate merit with selection based on intrinsic talents, meaning that those who are selected are inherently more suited to leadership than those not selected; however, merit harbours implicit biases and perpetuates non-transparent selection processes.2934 There is ample evidence that factors beyond intrinsic talent are involved in evaluation of merit; these factors include “likability,” sponsorship, and mentorship—all of which often exclude women and under-represented minority physicians.4243 In addition, reliance on merit disregards the extensive evidence that implicit and explicit biases disadvantage under-represented minority and female applicants in science, technology, engineering, mathematics, and medicine.4445

Traditional definitions of merit ignore characteristics commonly found among women and minority groups that positively affect leadership skills, such as lived experiences of oppression, discrimination, harassment, and care giving.4647 Importantly, there is evidence that quotas improve organisations; after implementing gender quotas in local elections, the quality of elected councillors improved rather than declined.48 The overemphasis on individual merit ignores the demonstrable benefits of diversity at the level of the team49: while an individual may be “the best” for the job, a team that lacks diversity does not have the diversity of thought, perspectives, and creativity to function optimally. Diverse leadership teams also foster perceptions of legitimacy.32 The “myth of meritocracy” has perpetuated a cycle of leadership selection that favours a homogeneous population of physicians.29

An important consideration for implementing quotas is whether they are constitutional; most countries bar discrimination on the basis of sex, gender, and race in employment decisions, and to some, quotas represent illegal “reverse discrimination” that disadvantages majority candidates. Despite legal challenges, many countries have successfully implemented and defended quota policies.2834464750 The US Supreme Court has heard several cases of white students being denied admissions to medical school because of affirmative action policies, with conflicting rulings.34 California’s corporate board diversity bills, which mandate quotas for women and under-represented minorities in corporate leadership, have increased the diversity of corporate boards, though legal challenges are ongoing.51 The House of Lords in the UK and the European Court of Justice have ruled against some quota policies as discriminatory but allowed others, and the European Court of Human Rights has ruled that quota policies are permissible.50 Many European countries have quotas for corporations or government that have withstood challenges, including France,52 Spain, Norway,53 and the UK.28

Legal scholars have argued that well designed quota programmes that are voluntary and incentive driven rather than mandatory are likely to withstand legal challenges.37 Any discussion of the legal risks of a quota policy must be balanced against the legal risks of continuing to allow documented discrimination in hiring processes, ongoing workplace harassment and exclusion, and pay inequality.1454 Consultation with the human resources department or an employment lawyer may be helpful.

The opinions of women and under-represented minorities on quota policies are conflicting. Some may worry that gaining a leadership position through these policies may lead to perceptions that they are not qualified.55 However, in one study all 400 African American students attending predominantly white universities thought that affirmative action policies were valuable.56 Similarly, despite initial opposition from men and women, quotas adopted in 2008 to increase women in corporate leadership are now viewed positively in Norway.33 Quotas for women in political leadership have decreased bias against women leaders, and these benefits may extend to other under-represented groups.30 Organisations that develop quota policies should confidently endorse people who are advanced because of these policies. Furthermore, members of under-represented groups should be consulted and provided with an opportunity to co-design these programmes.

Deciding who is “under-represented” for a quota policy is challenging because the selection of a reference population is not clear cut. The general population is often used as a reference for defining under-representation in medicine,57 but some have suggested that the proportions of women and under-represented groups in leadership should instead reflect the proportion of these groups as physicians.58 For example, despite accounting for 63% of all paediatricians in the US, women comprise only 26% of paediatric department chairs59; it is not clear whether aiming for 50% female paediatric chairs is more appropriate than 60%. Other industries have used 30% as a target for diversity36 based on conflicting evidence that this is the critical mass needed to overcome barriers for under-represented groups.60 Selecting a target for quotas is further complicated by the lack of baseline demographic data about physicians.

Other strategies to increase representation

Alternative strategies to increase representation should be trialled and evaluated, including paired mentorship to increase interest in leadership attainment, outreach methods to identify and train promising candidates,3862 research funding incentives for institutions that adopt best practices for increasing diversity,7 or empathy and implicit bias training for leaders to help those in power understand issues unique to under-represented groups.35 Although evidence that these methods are effective is sparse, trials of programmes that are co-designed with stakeholders are worthwhile.