Doctors’ early retirement has trebled since 2008

The number of doctors taking early retirement from the NHS has more than trebled over the past 13 years, official figures show. In 2020-21 1358 GPs and hospital doctors in England and Wales took voluntary early retirement or retired because of ill health, up from 401 in 2007-08 (fig 1). 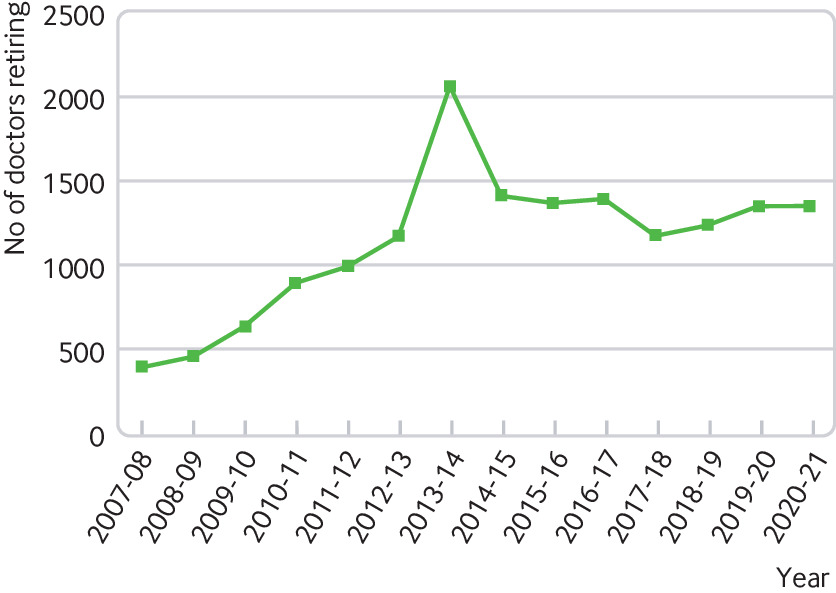 Doctors taking early retirement from NHS in England and Wales

The figures were provided to The BMJ by the NHS Business Services Authority in response to a freedom of information request. They relate to doctors who claimed their NHS pension in a specific pension year, some of whom may have returned to work in the NHS in other roles after claiming their pensions.

Changes to pension tax regulations since 2010 have left many senior doctors facing large tax bills.1 The BMA said that changes to tax regulation were one of the main reasons prompting doctors to retire, a situation confirmed last week by the financial watchdog the National Audit Committee.2 The fluctuations in the number of doctors taking early retirement also reflect this, showing sharp increases in some years. For instance, in 2013-14 2069 doctors took early retirement ahead of the changes to the NHS pension scheme in 2015.

The BMA has also warned that successive failures in government recruitment and retention schemes have meant that the UK has been seriously short of doctors for many years.

Commenting on the new figures, Vishal Sharma, chair of the BMA’s pensions committee, said that repeated surveys from the BMA had shown that more than half of doctors planned to retire before the age of 60, with most citing pension taxation as their primary reason. He said that the current pension taxation system was “punitive” and left “senior doctors with little option but to consider early retirement.”

The strain of working through the pandemic has left many doctors exhausted and battling stress and burnout, Sharma added. “Many have had their annual leave cancelled, and they have not had adequate time to rest and recover from the tumultuous year they have had, with no sign of let up as they now face the biggest backlog and waiting lists since records began.”

Sharma said that the situation had been exacerbated by the government’s decision to freeze the lifetime allowance for pensions taxation for next five years, which will increase the amount of tax that many doctors have to pay on their pensions.

“A BMA survey demonstrated that 72% of doctors would consider retiring even earlier as a result of these changes,” he said. “The combination of an exhausted workforce coupled with the freezing of the lifetime allowance being imposed at the same time will potentially result in a mass exodus of highly experienced doctors, at a time when patients need them the most.”

He said that a “simple but effective” change that the government could do would be to implement a tax unregistered pension scheme in the NHS. “The government has already implemented such a scheme for the judiciary to address similar recruitment and retention issues,” he said. “A comparable solution within the NHS will allow our most experienced doctors to remain working in the NHS and consequently avert this workforce crisis.”

See other articles in issue 8297