Beyond the numbers: understanding the diversity of covid-19 epidemiology and response in South Asia

South Asia was one of the first regions to be exposed to SARS-CoV-2 through travellers in January 2020. However, the subsequent epidemic profile of covid-19 in the region varied considerably, as it did in Africa. After an initial rise, cases plateaued in all countries of South Asia except India, where the pandemic led to a steady rise in cases and deaths until the autumn of 2020.1 Pakistan received praise for its early response to covid-19 and the organisation of a systematic health systems and social sector response.2 After a relative quiescent period countries in South Asia, especially India, faced a big upsurge in cases and deaths in the spring of 2021, possibly related to the SARS-CoV-2 delta variant.3

The region faces additional challenges. The economic downturn in India is both massive and unprecedented, with consequences for poverty and food insecurity.4 Although Pakistan was able to launch a massive and successful early cash transfer scheme to blunt the effects of the lockdown on the poorest 16.9 million people,5 it has limited fiscal space left to provide the additional $1.5bn (£1bn; €1.3bn) needed for continued support.

After 18 months of intermittent lockdowns, limited mobility, school closures, and economic contraction, there is understandable fatigue with lockdowns and business and school closures. Despite the availability of several effective covid-19 vaccines, global rollout remains fractured and vastly inequitable, with 13 countries accounting for 80% of the roughly two billion doses administered by the end of May 2021.6 The spread of variants with increased risk of transmission,3 coupled with widespread vaccine hesitancy, now threatens to upend much of the recent gains in covid-19 response.

Comparison of covid-19 epidemiology and response

We reviewed the global covid-19 pandemic profile in South Asia and other global regions based on publicly available databases.1 We defined global patterns of the pandemic by classifying the reported peaks of cases and deaths in three sequential phases depending on observed patterns (irrespective of any subjective interpretation as “waves”) and compared various population based indicators (testing rates, case load, and deaths per million population).

We have previously described the early organisation of oversight and control of covid-19 in Pakistan in some detail,2 and now expand this analysis broadly to compare the covid-19 response across several countries of South Asia. We also included Iran in the comparison because of its robust registration systems for vital statistics and availability of information from an early stage of the pandemic. We obtained data from publicly available databases as well as national sources in the ministries of health (for Iran and Afghanistan) on testing rates, confirmed covid-19 cases, and deaths. We also compared the timing and severity of mitigation strategies such as movement restrictions, closures of businesses and schools, and strict curfews using the Oxford stringency index.7 Stringency index patterns show that strict lockdowns were fully in place across South Asia by the end of March 2020 and still continue in some countries.

How robust are the data?

Figure 1 details the trends in testing and positivity rates since March 2020 for several South Asian countries plus Iran, and table 1 compares these rates over the three phases of the pandemic. The corresponding data from other Unicef regions are given in figure 2. These show that testing rates increased overall between phase 1 and 2 of the pandemic, with a weekly average of 900-4000 tests per million populationacross South Asia. Although higher than in countries from South East Asia, Latin America, and sub-Saharan Africa, this testing rate is still several folds lower than rates in North America and Europe. The variability in rates of testing in South Asia is related to limited facilities, costs, and access. To illustrate, Pakistan has mainly relied on the gold standard imported polymerase chain reaction (PCR) tests for SARS-CoV-2 detection in nasal or nasopharyngeal swabs and has already spent over $250m (£180m; €210m) on testing, far exceeding some annual provincial health budgets. India has relied on locally developed low cost rapid antigen detection tests for over 60% of its testing capacity. 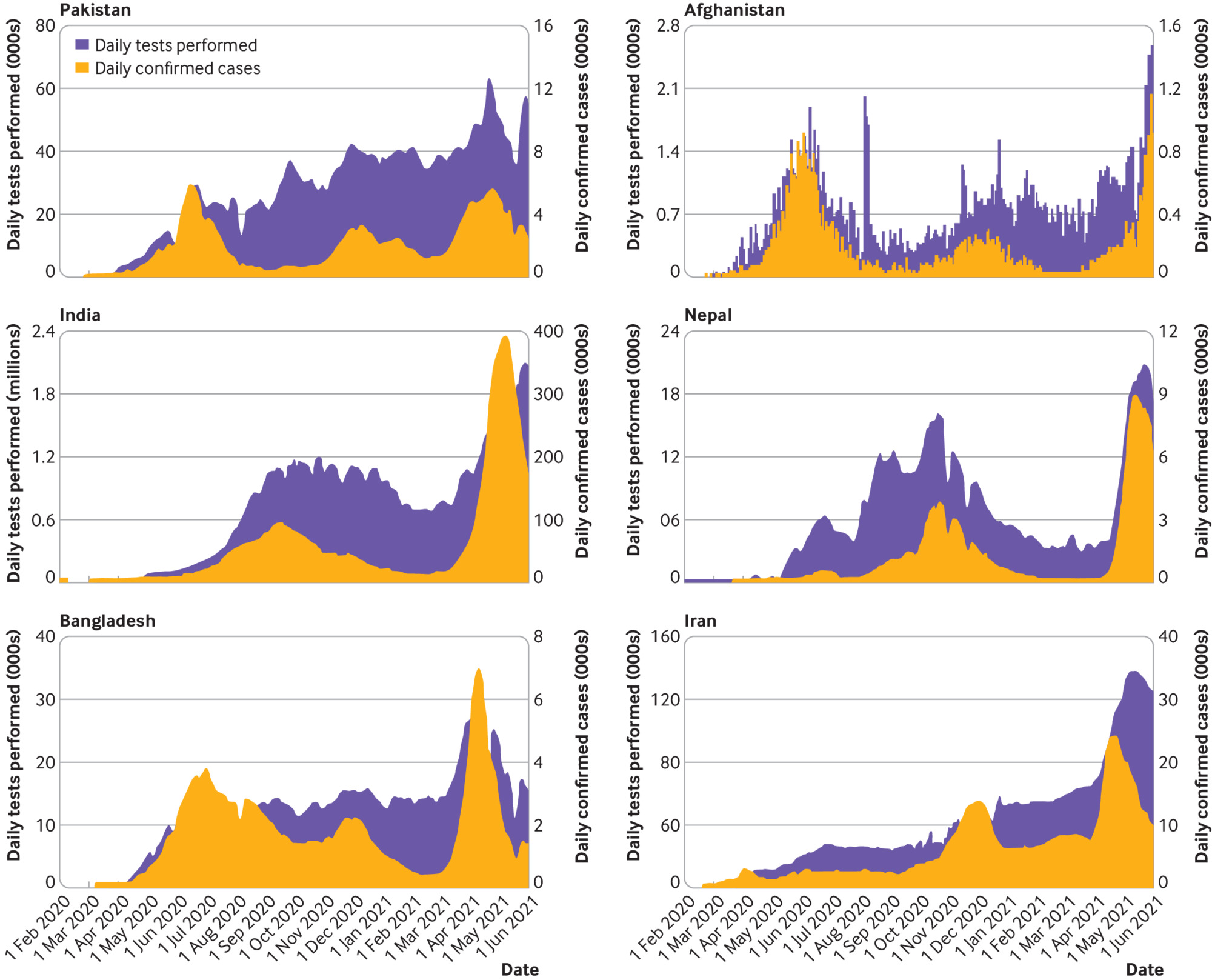 Numbers of tests, cases, and deaths per million population in South Asian countries and Iran until 31 May 2021 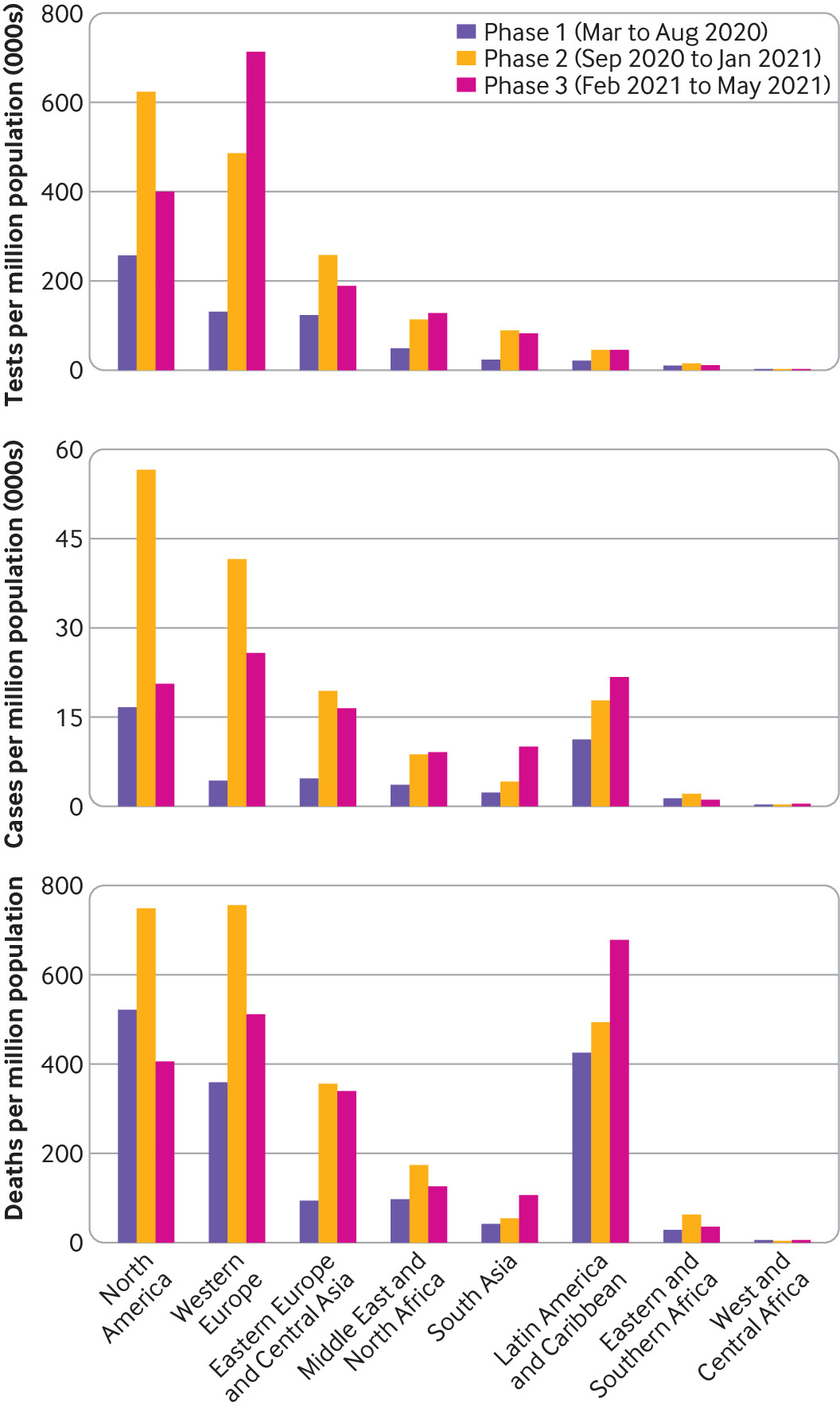 Testing, cases, and deaths from covid-19 in selected Unicef regions (data from Our World in Data)

Given relatively low rates of testing, doubts have been expressed about the veracity of covid-19 mortality data from South Asia and Africa, as no countries have a registration system in place to record births and cause of death. However, many countries put in place specific systems to capture covid-19 deaths. In Pakistan the infrastructure of the polio surveillance programme was adapted for covid-19 reporting, and a mortality reporting system was established with standardised data entry systems across 494 public and private sector hospitals covering all regions.2

Some systematic under-reporting of covid-19 related deaths is, however, likely, as in high income countries,8 and it has been estimated to be as high as 7.1 million.9 But the mortality capture gap in 2020 is unlikely to have been massive in South Asia. The same data capture systems have diligently reported the upsurge in cases and deaths during the third phase of covid-19 across the region with corresponding immense pressures on health systems.

Although reporting systems may not have captured the full magnitude of covid-19 associated mortality in phase 1 and 2 of the pandemic, they do permit reasonable trend analyses. Over the past year covid-19 related deaths remained much lower in South Asia than in the US, UK, and Europe, and also lower than in Brazil, Mexico, and South Africa. Africa has also had relatively low death rates from covid-19. Although the reason for this remains unclear, it could be partly related to a relatively younger population with lower levels of comorbidities that increase the risks of deaths from covid-19.

To illustrate, the differences in life expectancy (average 77 years in Iran versus 63-68 years in South Asia), proportion of population aged >60 years (74% versus 51-54%, P<0.01), and known burden of non-communicable diseases in these age groups10 could partially explain the high death rates in Iran compared with its neighbours (table 2). Other intriguing, although unproved, hypotheses underlying the low case fatality rates in South Asia and Africa in 2020 relate to factors such as innate immunity and previous exposure to other strains of coronavirus.11 There could also be widespread subclinical exposure to the virus at population level, with serosurveillance studies estimating that infections are asymptomatic in up to half of adults.12

Caution should be exercised in interpreting population serosurveillance studies, however, as they may be confounded by variable laboratory methods, with many assessments based on total antibody estimates as opposed to neutralising antibodies. Population prevalence studies between May and June 2020 using ELISA tests13 revealed very low population weighted seroprevalence in India (0.73%, 95% confidence interval 0.34% to 1.13%). Tests using a commercial electrochemiluminescent automated immunoassay in low and high transmission neighbourhoods of Karachi in June 2020 showed 8.7% (5.1% to 13.1%) and 15.1% (9.4% to 21.7%) prevalence, respectively.14 By contrast, targeted studies in slum populations of Mumbai in June and July 2020 showed that 54.1% (adjusted range 55.1-61.4%) of people tested were positive for antibodies compared with 16.1% (range 12.0-18.9%) among non-slum dwellers.15 Comparable seroprevalence trends were seen in Bangladesh.16

The disastrous upsurge of cases in India in spring 2021 is now recognised to be related to the emergence and spread of the delta variant (B 1.617.2), considered 50% more infectious than the more common alpha variant (B 1.1.7) first identified in the UK.17 With caseloads having risen across other South Asian countries such as Nepal, Afghanistan, and Bangladesh, it is evident that despite seropositivity at population level, many people remain susceptible to these new variants.

What have we learnt?

The first lesson for South Asian countries, as for other low and middle income countries, is that covid-19 is unsparing and complacency can be disastrous. The fact that the region was spared the worst of mortality in 2020 despite a moderate case load, led to widespread disregard of social distancing and mask use. India saw massive attendance, exceeding 3.4 million people, at the annual religious festival Kumbh Mela on the banks of the River Ganges, and the farmer’s strike in Punjab with widespread congregation of protestors also lasted months. In Pakistan serial political rallies and mass demonstrations became the norm after September 2020 and were accompanied by a sense of victory over the pandemic, premature as it turned out. It is unclear if a similar upsurge of covid-19 awaits Africa.

However, South Asia must learn to live with the pandemic. There is little appetite for renewed restrictions given the considerable secondary effects of the stringent mitigation measures on the economy as well as maternal and child health and nutrition services.18 Children are probably the least recognised victims of the crisis globally. While schools in Pakistan reopened intermittently after a prolonged closure, they closed again in the recent upsurge. For some of the youngest children this has meant complete interruption of learning and schooling for over a year with potential long term consequences. A recent case study of the indirect effects of covid-19 in South Asia estimates a 14-16% increase in child and maternal mortality, important effects on undernutrition, and 400 000 extra adolescent pregnancies given the estimated 4.5 million girls dropping out of schools.19

The third lesson, learnt the hard way, is the need for good governance and pandemic planning. Health authorities in Delhi took far too long to set up a supply chain for oxygen and field hospitals to increase capacity to care for the sick. Key medications for patients in hospital with covid-19 disappeared from pharmacies to be sold on the black market at exorbitant rates, and often to ambulatory patients least in need. These recognised pressure points could have been predicted and avoided.

Fortunately, other South Asian countries seem to have learnt vital lessons to avoid a virtual collapse of the health system, as seen in India. All countries experienced problems with communication and transparency during the chaos in the early phase of the pandemic. These were soon overcome in Iran in 2020,20 but have remained a notable feature of other dysfunctional governments dealing with high burden of covid-19.21 Covid-19 can be controlled only with patience and by winning over hearts and minds of the people. As our recent analysis of the response to covid-19 in the Islamic world suggests,22 the most successful responses were not among the authoritarian regimes but countries with effective civic society engagement, open dialogue, and stable democracies.

Perhaps the single largest risk for a continued covid-19 crisis in South Asia is the abysmal vaccination strategy in the region. India implemented an intense vaccine diplomacy initiative with donations to all strategic neighbours (except Pakistan), but given the massive domestic burden of infections, reneged on the promised supplies to the global Covax facility.23 The supply and pace of vaccinations has not kept up with the spread of covid-19 in any low or middle income country. A large increase in global finances will be needed to support and enhance Covax, which given limited supplies also poses enormous ethical challenges for targeting in recipient countries. With current half-hearted mitigation measures and covid-19 fatigue, this pandemic could extend its course, exacerbate disparities, and impact development for years to come. We need global solidarity and concerted evidence informed efforts to contain this existential threat, and countries of South Asia need to find common ground and solutions.