Tom Frieden: On the “mind boggling” interference of the Trump administration during covid-19 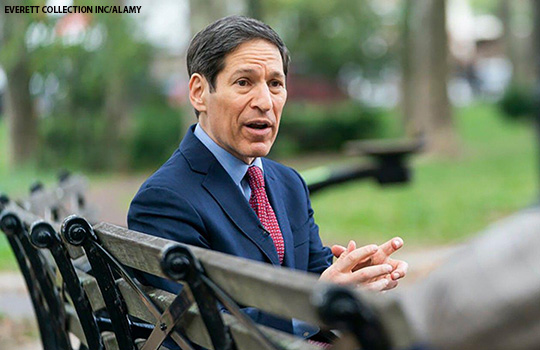 The former head of the CDC tells The BMJ about the US’s struggles to control covid-19, and what the country needs to do next

Tom Frieden led the US Centers for Disease Control and Prevention (CDC) for nearly a decade until 2017. He’s worked on tuberculosis in New York City and India, tobacco control, diabetes, nutrition, HIV, and other public health issues.

Frieden served as the New York City commissioner of health from 2002 to 2009, and is currently president and chief executive of Resolve to Save Lives, an initiative of the global health organisation Vital Strategies.

You’ve said the number of deaths in the US could reach one million. Do you still think that?

At the beginning of the H1N1 (swine flu) pandemic in 2009, President Barack Obama turned to me and said, “Doctor, this isn’t going to kill a million Americans, is it?” I said with considerably more confidence than I felt, no, it wouldn’t . . . But if I were forced to answer that question now, it’s quite a bit harder to answer. It is not impossible, but only if we let it.

In August 2019, you and colleagues at Resolve wrote in BMJ Global Health about pandemic preparedness.1How have countries fared?

Countries that are islands have important advantages, but other than that, countries that have both a strong public health system and good governance—Singapore, South Korea, Germany—do much better. They have five or ten fold fewer deaths than other countries on a per capita basis.

In the US what we’ve seen is a response that wasn’t organised, wasn’t based on science, and didn’t communicate openly, honestly, or forthrightly with the American public. So I’m enormously encouraged by the start of the Biden administration where it’s very clear there’s organisation, there’s a plan, there’s clear communication, and science will rule again.

It must have been painful to watch as political appointees to the CDC began making decisions about data, policy, and recommendations

It really was unprecedented. The CDC was undermined, sidelined, and maligned in a way that has never happened before. Materials were put on the CDC website that weren’t written by the CDC. I would compare that to someone writing graffiti on a national monument, except as someone pointed out to me [at least in that case] everyone knows it’s graffiti. I think it’ll take some time for the trust in the CDC to be regained.

On the other hand, the 20 000 professionals at the CDC continued to do really important work through the pandemic. And Americans, by and large, went to the CDC for information—they had more than two billion hits on their website. But because the CDC wasn’t able to speak directly to the American people from the podium, a lot of things got misunderstood or misinterpreted. The CDC wasn’t able to say when it was changing guidance and why, and whether that was a valid reason. They weren’t able to answer very important questions about things that had gone wrong. There’s a lot of catching up to be done now, but I’m optimistic that we’re on a much better route to progress.

Did Trump’s actions undermine the credibility of the CDC?

At the press conference at which the CDC announced the recommendation that people should wear masks, President Trump said, I’m not going to wear a mask. Now, if President Trump had said, I don’t want the CDC issuing a recommendation that people wear masks, that would have been within his authority—[though] I wouldn’t agree with it [and think] it would have been a terrible mistake. But to have the complete dysfunctionality of a government that’s recommending masks and at the very same press conference, undermining that recommendation was really mind boggling.

What about the CDC’s role in collecting information?

From the outside, you’d think it should be easy to get this piece of information or that piece of information. But it’s extraordinarily complicated. The public health in the US has been under-invested in for decades and doesn’t have modern informatics systems. Plus, the US healthcare system is enormously decentralised and has a very heterogeneous approach to information systems, and laboratories that are very different in different places.

On top of all of that, the US has a federalist system. The CDC provides guidance and recommendations, but the actual data collection is done at the state and local level, and there tend to be pretty significant disconnects between the CDC and states and also, in most states, between states and local areas.

How is the world doing in terms of surveillance?

The World Health Organization has just released a score package assessing the quality of surveillance systems in every country, and fundamentally, the score of the world needs improvement.

Covid-19 has to be a wake-up call for the world. This is the time to make a huge step forward in our ability to understand health risks, to track and monitor, to find problems when and where they first emerge, to respond rapidly so that if they can possibly be stopped, they are stopped and to prevent them wherever and whenever possible.

How is the rise of new variants going to affect the pandemic response effort?

So far, we haven’t seen any variants that can completely escape the [current] vaccines or our natural immunity. But that doesn’t mean that won’t happen. And one of the really important directions that we need to follow is not thinking that vaccination is going to solve all of our problems.

Vaccination is by far the single most important thing that we can do to confront covid. But to protect the effectiveness of vaccines, we have to damp down the spread of the virus or else the risk is that variants will emerge that can evade the vaccine induced immunity or naturally induced immunity.

The broader issue of surveillance and [the US’s lack of] genomic surveillance demonstrates one of the areas where we need to improve. By 2016, there was a European consortium that was able to do real time genomic sequencing of the Ebola virus in Guinea and other areas of West Africa. It was helpful in figuring out where strains were spreading, whether a new case was part of an existing cluster or a new cluster, and the importance of integrating the laboratory work of sequencing with the shoe leather work of figuring out how the disease is spreading.

And it’s not just about how many virus isolates you can sequence. It’s also how good is your epidemiologic understanding of spread so that you can connect the RNA in another viral case DNA sequence with the patterns of disease and the patterns of the spread of infection.

How can we be ready for the next pandemic?

We have to recognise that we are underprepared for [epidemic] threats. Every country needs to look at their own system and think, how can the public health capacities be better and how can the government be better?

We need to think about resilience of our healthcare systems, resilience of individuals, and resilience of our political system to be able to deal with disruptive health events so that we can minimise disruption, minimise loss of life, and minimise the dislocation of our social, educational, and economic activities that also have major potential harms to health.

We need WHO to be even stronger as the anchor and pivot point for our global health work, and we need to think about our global health architecture because we need substantial investments in many countries, especially lower and middle income countries in Africa and elsewhere. And that’s going to cost billions of dollars a year. Each country needs to step up, but for the lower income countries, the world also needs to step forward in partnership.

We have to recognise that if anyone ever doubted that the world is inextricably interconnected, covid should have put that doubt to rest forever. And because of that, we also should recognise that our fates are bound up with one another. And the more we work together, the better off we will all be.