Vitamin D supplementation and testing in the UK: costly but ineffective?

Vitamin D supplementation is a hot topic, both in the scientific literature1 and in the media, which often portrays it as a panacea for disease.23 Since 2013, vitamin D has been one of the 20 most commonly prescribed medications in the English NHS. Of the top 20 agents in 2018, vitamin D had the fourth largest increase in both prescriptions and costs since 2008. Testing for vitamin D has also increased. At the same time, the effectiveness of supplements for conditions other than the deficiency diseases rickets and osteomalacia has been questioned.14 It is therefore important to ask whether the investment by the NHS has been accompanied by improvements in health outcomes and if current guidelines are the best use of resources. 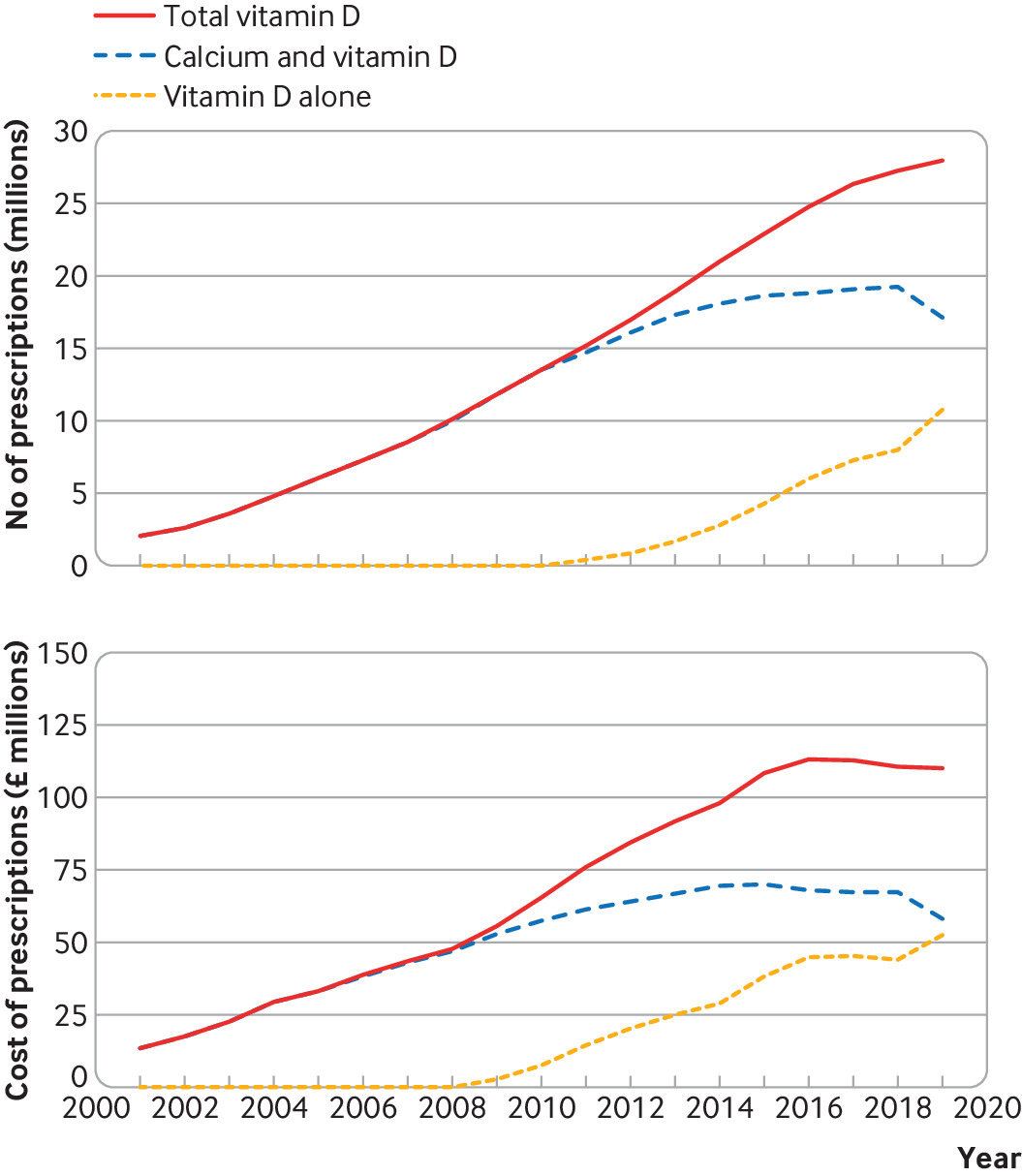 Number of prescriptions in the UK for vitamin D (cholecalciferol and ergocalciferol) with and without calcium and annual cost of those prescriptions, 2000-20 (data from UK prescription cost analyses)

The NHS also spends large amounts on measuring vitamin D stores (as serum 25-hydroxyvitamin D).56 Large increases in requests for tests have been reported from primary care practices in England,78 and data from four laboratories in each country of the UK show at least 10-fold increases in tests performed since 2001 (fig 2). Collectively, these four laboratories serve populations of about 8.4 million people. If these data are extrapolated to the UK population, and using an average cost to the NHS of ₤15 a test,7 we estimate that annual testing costs increased from about ₤1m to ₤17m between 2001 and 2018. There is considerable uncertainty in these estimates, given variations in local testing practice and assay cost, but they are substantially lower than those in Canada and Australia,5 and may therefore be a considerable underestimate if indirect costs of testing and appointments are factored in. Taken together with prescribing, the total costs to the NHS are likely to exceed £130m a year. an increase from about ₤14m a year in 2001. The total cost to the NHS over the past decade exceeded ₤1bn. 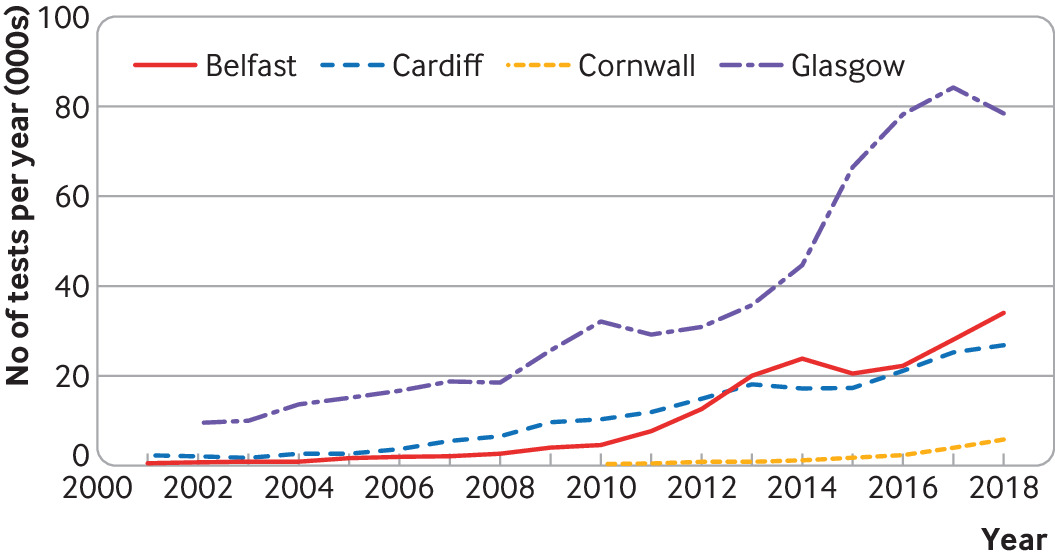 Number of 25-hydroxyvitamin D tests a year in four laboratories in the UK. Estimates of the populations served by each laboratory: Glasgow 5.5 million, Belfast 1.9 million, Cardiff 500 000, Cornwall 450 000

Until 2016, UK guidance on vitamin D supplementation had changed little in 30 years and focused on groups at high risk of vitamin D deficiency. However, in 2016, new recommendations considerably expanded the scope of vitamin D testing and treatment. The Scientific Advisory Committee on Nutrition (SACN), recommended new reference nutrient intakes for vitamin D based on musculoskeletal outcomes (table 1).9 The reference intake for children over 1 year and adults was set at 10 µg/day.

UK guidance on reference nutrient intake for vitamin D, 1991 and 2016

The committee suggested that because the equivalent of this intake cannot be achieved through sunlight exposure in winter in the UK, dietary strategies to increase intake should be considered. As a result, Public Health England recommended that the entire population “should consider taking” vitamin D supplements in autumn and winter, and adults at risk of vitamin D deficiency and children under 5 years should take vitamin D supplements year round.10 This change in guidance was adopted by equivalent bodies in Wales, Scotland, and Northern Ireland. At the end of 2016 the National Institute for Health and Care Excellence (NICE) released detailed clinical knowledge summaries that included discussion of when to measure vitamin D, how to diagnose vitamin D deficiency, and when and how to provide vitamin D supplements.1112

The 2016 SACN report concluded that only the musculoskeletal outcomes of rickets, osteomalacia, falls, and muscle strength and function should be used for setting reference intakes for vitamin D.9 There was insufficient evidence of benefit for bone density, markers of bone turnover, fracture prevention, and all non-musculoskeletal outcomes to justify including these outcomes in its deliberations.9 The committee did not provide any quality assessment of studies it reviewed, a formal assessment of the strength of its recommendations (eg, using the GRADE tool), or an economic evaluation of potential effect on health services.

Since the SACN report was released, the meta-analyses it relied on to support vitamin D supplementation for improved muscle strength and function have been independently updated with three retracted and unreliable trials removed.13 These updated meta-analyses no longer show a beneficial effect of vitamin D.13 For falls, contemporaneous meta-analyses to the SACN report141516 and subsequent randomised trials and more comprehensive meta-analyses and trial sequential analyses do not show benefits of vitamin D supplementation.4 Thus, the only two outcomes for which there is unequivocal evidence for vitamin D supplementation are the vitamin D deficiency diseases of bone mineralisation: rickets (children) and osteomalacia (adults). Each is best diagnosed from bone histology, but in clinical practice is usually diagnosed from clinical features, radiology, and biochemical analysis, including low serum calcium and phosphate concentrations, increased serum parathyroid hormone activity, and increased serum markers of osteoblast activity, such as alkaline phosphatase.

The rates of hospital admissions for osteomalacia and rickets in England have remained low, at 30-100 cases a year from 1998 to 2018 (fig 3). Cases of rickets may have increased slightly before to 2008, and both conditions fell slightly from 2008 to 2014, before the change in guidance. In stark contrast, the admission rate for the broader diagnostic category of vitamin D deficiency was low until 2007, increased fourfold over the next four years, and then stabilised (fig 3). It cannot be determined from these data whether the increase between 2007 and 2011 represents a true increase in prevalence of symptomatic vitamin D deficiency, but the apparent decreases in rates of admissions for rickets and osteomalacia during this time argue against it resulting from a change in disease prevalence. It is more likely to have occurred because of changes in coding practices, such as coding an isolated 25-hydroxyvitamin D concentration of <25 nmol/L as vitamin D deficiency in people admitted for other reasons. 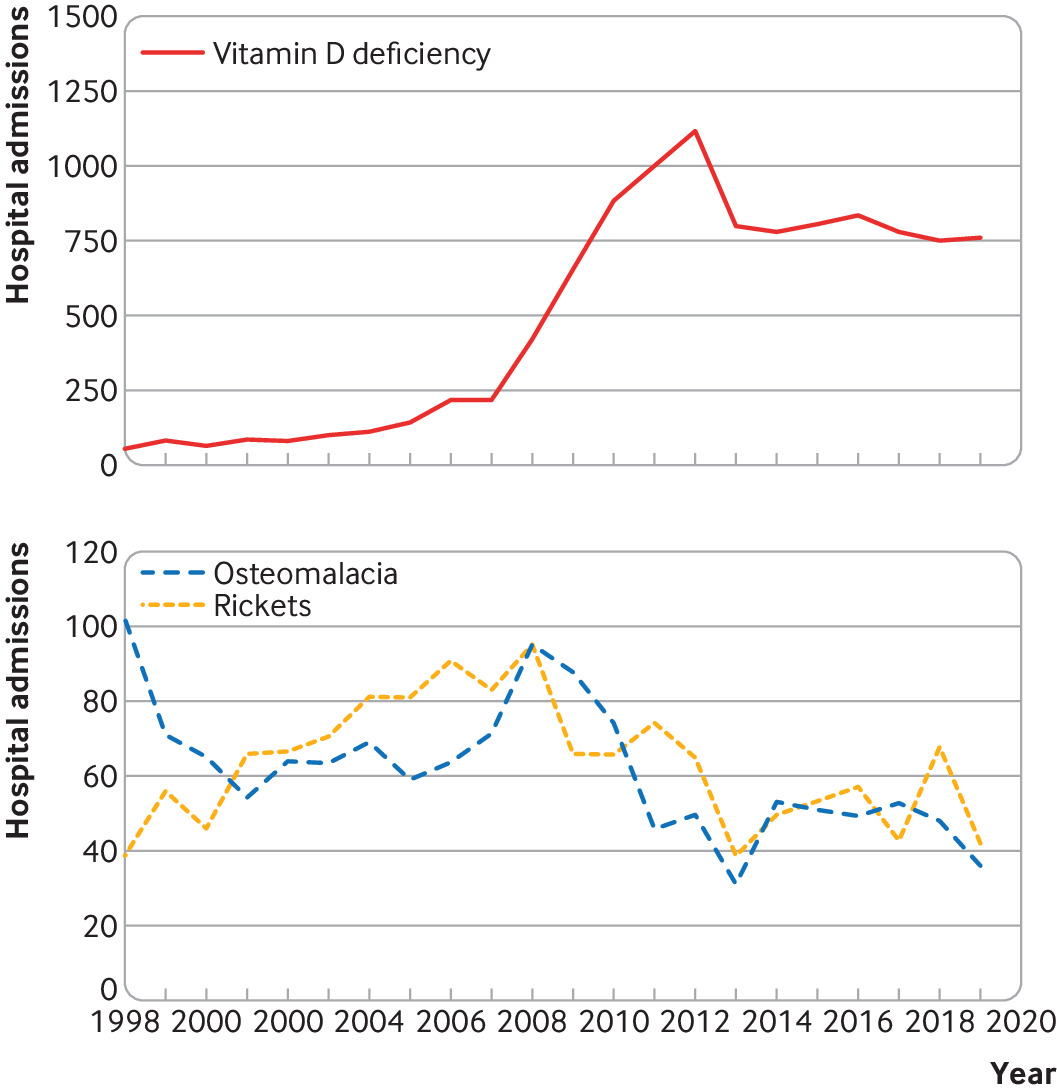 A retrospective survey of symptomatic vitamin D deficiency in children in Glasgow identified an average of 23 cases a year from 2002 to 2008, with a clear annual trend of increasing cases.17 Only two thirds of the affected children had clinical features of rickets.17 Two more recent surveys of 3500 paediatricians in the UK and Republic of Ireland using the British Paediatric Surveillance Unit reported low numbers of children with hypocalcaemia and rickets. In the first survey, 91 cases of hypocalcaemic seizures were reported during 2011-13.18 In the second survey, 125 cases of rickets that met a standard, predefined definition were reported during 2015-17.19 These figures may be underestimates because rickets may be under-recognised and non-skeletal complications such as hypocalcaemic seizures or cardiomyopathy may not be attributed to vitamin D deficiency.192021 Nevertheless, the findings from these three reports are consistent with the hospital statistics, and collectively show that neither rickets nor osteomalacia admissions have decreased substantially despite increased testing and prescribing. However, the incidence of rickets might have increased over the past 20 years in some areas.17

UK guidance seems to have had little effect on practice. Vitamin D supplementation and testing increased steadily from 2001 onwards, in the absence of guidance recommending such changes, and the rate of supplementation did not increase after the 2016 guidance change (fig 1). The reasons for the increased supplementation and testing are unclear, although we note that vitamin D is relentlessly but uncritically promoted in the media for numerous indications,22 and that many medical articles claim widespread benefits from vitamin D supplements, often based on weak observational evidence.23

The large increases in vitamin D testing, and the change in recommendations from targeting high risk groups to supplementation of more of the population, do not seem to have affected the incidence of osteomalacia and rickets. Alternative approaches should therefore be considered.

Rickets and osteomalacia are preventable, and others have argued that the UK should be able to prevent these conditions through public health policy.181924Table 2 shows five possible broad strategies and their advantages and disadvantages. The strategy that is most likely to be effective is food fortification. Historically, food fortification in the UK largely eliminated rickets caused by vitamin D deficiency,2526 but this practice was mostly stopped during the 1950s after cases of infantile hypercalcaemia occurred, possibly because inappropriately high doses of vitamin D were used to fortify food.2526 Mandatory margarine fortification continued until 2013.27 Several countries, including Finland, have national vitamin D food fortification programmes that have largely eliminated rickets without safety concerns.28

Strategies for prevention of osteomalacia and rickets from vitamin D deficiency

Although SACN9 and most reviews2930 have not found evidence of benefits of vitamin D supplements on non-musculoskeletal outcomes, a few meta-analyses have reported benefits31 in subgroups with serum 25-hydroxyvitamin D <25 nmol/L, but these have not changed guidance.32 Food fortification is likely to prevent the development of such levels in the population. NICE recommends that patients with osteoporosis should have their vitamin D levels measured and, if deficient, be prescribed vitamin D supplements.11 Again, food fortification would largely remove the need to measure vitamin D and co-prescribe vitamin D in this situation.

The guidance on vitamin D supplementation and testing should be reassessed. Food fortification is likely to be both cheaper and more effective33 than the current recommendations and could be combined with targeted supplementation programmes in populations at risk, if necessary.

See other articles in issue 8283