How have NHS staff coped faced with thousands of patients with a novel and highly infectious virus, and massive upheavals in their working environment? Over the preceding decade, rates of sickness absence among staff directly employed by the NHS in England have been fairly stable. Sickness absence rates averaged about 4% of the workforce each month (about 1.5 million days out of about 38 million total days contracted), with usual seasonal trends—equivalent to about 50 000 full time equivalent staff being off each month.1

But last year was far from ordinary. Provisional statistics from NHS Digital show that although sickness rates in January and February 2020 were similar to the average for the previous decade, in March they began to rise above the 10 year average, peaking in April at 6.2% of the workforce absent each month (fig 1).1 This is equivalent to about 79 000 full time staff absent each month—enough for 10 large hospitals. 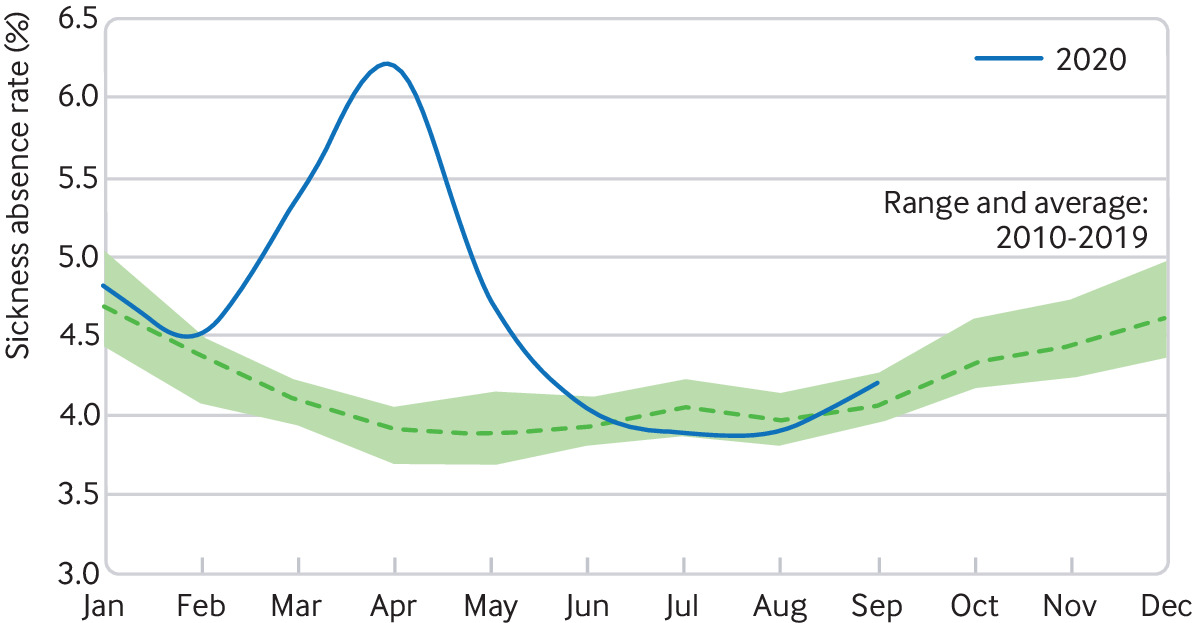 Sickness absence rates (number of days off sick as a percentage of total workforce days contracted) among English NHS staff, 2010 to September 20201

The “excess” sickness absence between March and June is likely to include not only staff with confirmed covid-19 but also staff isolating with potential or suspected infection. But total days lost for infectious disease reached almost one million in April last year. The monthly average over the previous five years was just 25 000.1 2

NHS staff sickness absences varied geographically, reflecting the sweep of the pandemic across England. In London, absence rates rose faster, slightly earlier, and to a higher peak than in other regions (fig 2). 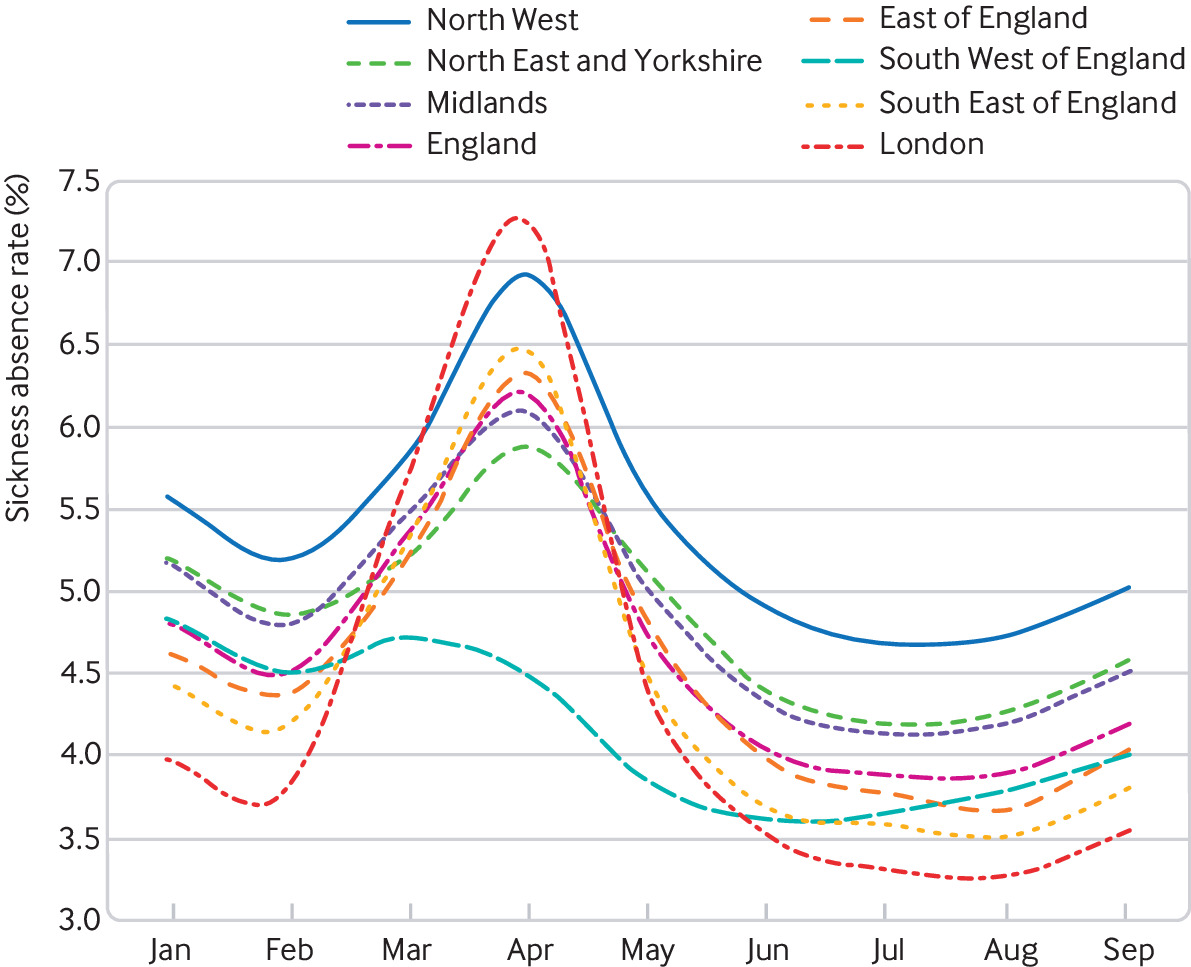 NHS staff sickness absence rates (number of days off sick as a percentage of total workforce days contracted) by region, January to September 20201

Compared with April 2019, total sickness rates were substantially higher for all staff in April 2020 (fig 3). Doctors’ sickness rates—traditionally lower than those for other staff groups— rose the most, from 1.3% to 3% absent each month. 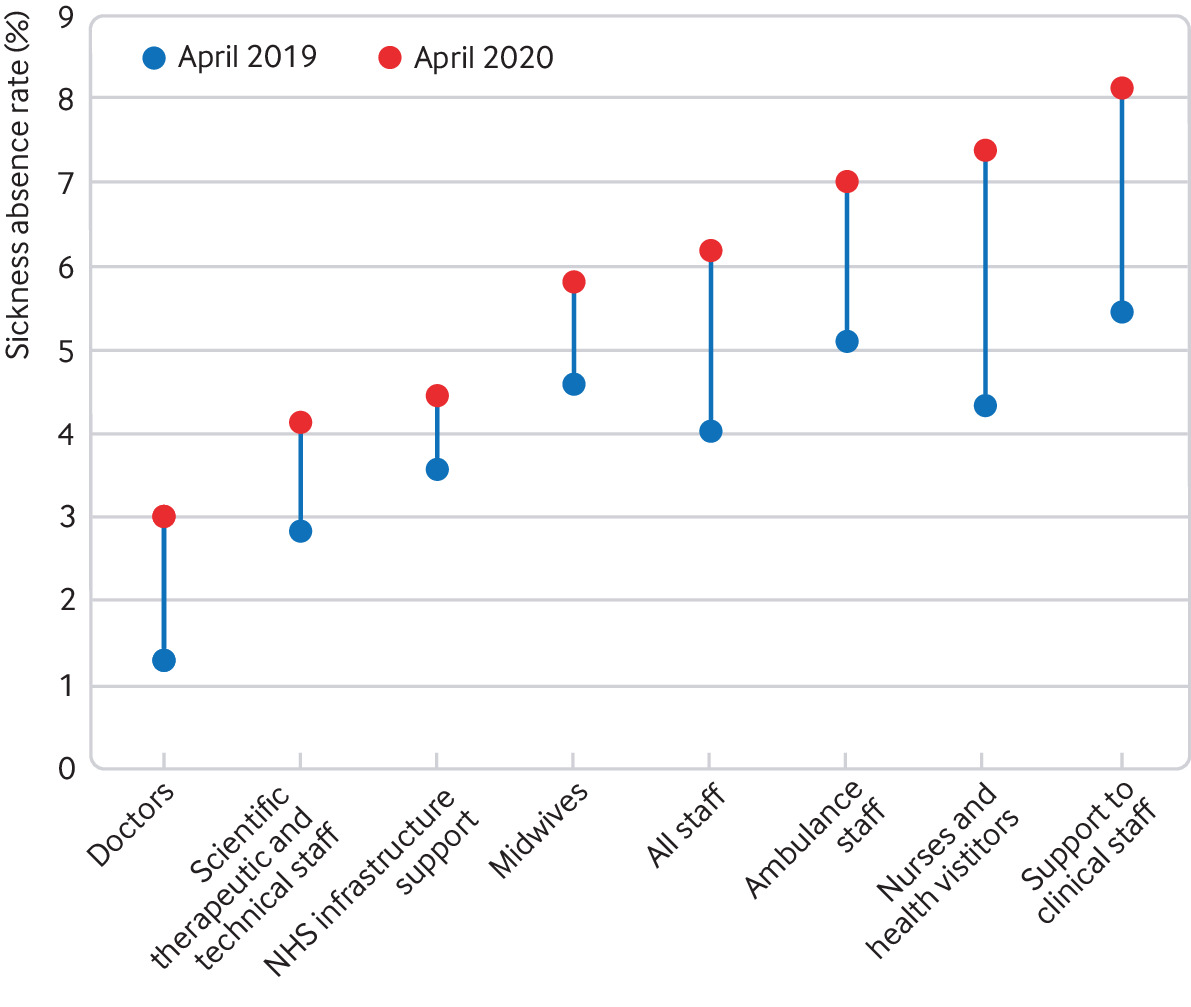 Staff groups were also affected differently by absences related to covid-19, with doctors hit particularly hard (fig 4). In April, half of all doctors’ absences were due to covid-19. For foundation year 1 doctors, this figure was 67%, with 4552 days lost because of covid-19 out of a total of 6817 sick days. 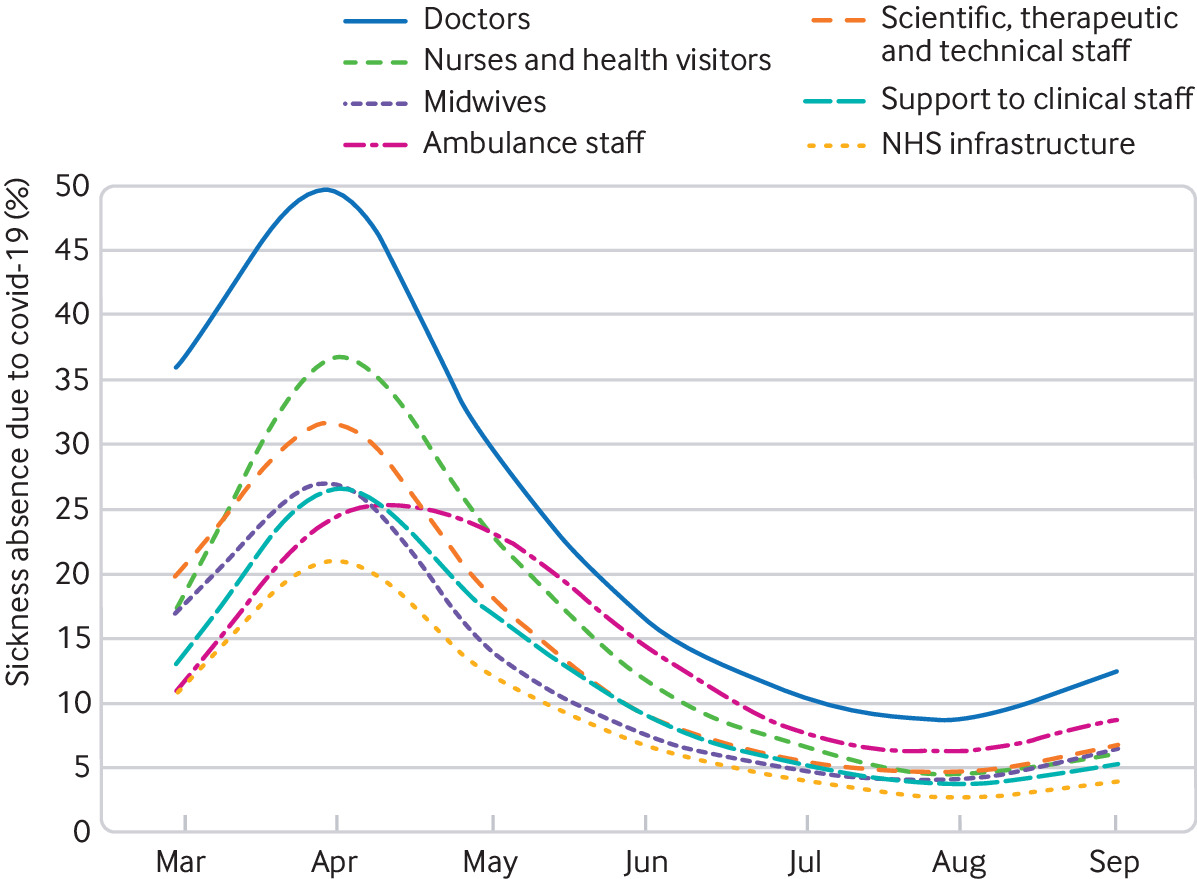 Proportion of English NHS staff sickness absence due to covid-19, March to September 20201

In total, for all NHS staff, last year 1.7 million days’ work were lost because of absences related to covid-19 between March and September alone—an average of over 240 000 a month. And tragically many hundreds of NHS staff have died with covid-19, including at least 35 doctors.3

The latest NHS Digital data1 show a rise in absences in all regions and staff groups and in infectious disease as the reason. Figures covering the second wave of the pandemic, when the health service and its staff were under even more pressure than in the first wave, won’t be available for another two months. But other data collected by NHS England related to covid-19—unfortunately, not directly comparable with the NHS Digital data—indicate that sickness absences rose again in the second wave of the pandemic. However, by 6 January 2021 they had not reached the levels recorded last April.4 It may be that lessons from the first wave, more access to effective personal protective equipment, and better infection control have helped keep staff safer.