Jeremy Farrar: Make vaccine available to other countries as soon as our most vulnerable people have received it 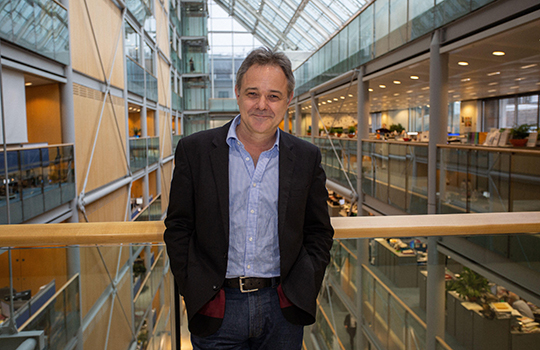 The SAGE adviser and Wellcome Trust director tells Mun-Keat Looi how the UK government acted too slowly against the pandemic, about the perils of vaccine nationalism, and why he is bullish about controlling covid variants

“Once the UK has vaccinated our most vulnerable communities and healthcare workers we should make vaccines available to other countries,” insists the infectious disease expert Jeremy Farrar. This could avert further public health and economic disaster, he says, describing it as “enlightened self-interest, as well as the right ethical thing to do.”

In April 2020, soon after the first UK lockdown began, Farrar predicted that the UK would have one of the worst covid-19 death rates in Europe. As a member of the Scientific Advisory Group for Emergencies (SAGE) and the UK Vaccine Taskforce, he has criticised the UK government’s covid-19 response for being too slow and too weak. He’s positive about the current pace of vaccine deployment in the UK, however. “I personally would much rather vaccinate vulnerable people and healthcare workers elsewhere in the world than have the vaccine myself,” he tells The BMJ.

Since 2013 he has led the Wellcome Trust, with its £1bn (€1.15bn; $1.38bn) annual grant for global health research. Once an Oxford professor, he lived abroad for much of his life, including 18 years in Vietnam leading clinical research at Ho Chi Minh City’s Hospital for Tropical Diseases. His work has focused on HIV, SARS, bird flu, and dengue fever outbreaks.

Have the UK and the global community handled this pandemic well?

Experience shows that you must never, ever underestimate epidemics. This is the most important lesson I learnt in my 18 years in Vietnam. You have to be brave enough to act quickly, before you have all of the information. With an exponentially increasing epidemic, as soon as you get behind the curve it’s incredibly difficult to turn it around.

By 20 January last year countries had enough information to know what was coming: you have asymptomatic transmission and mild illness, it causes people to die, and you can transmit it in a family or among healthcare workers. We had no human immunity, no diagnostics, no treatment, and no vaccines.

Every country should have acted then. Singapore, China, and South Korea did. Yet most of Europe and North America waited until the middle of March, and that defined the first wave. Countries including the UK were unwilling to act early, before they felt comfortable; were unwilling to go deeper than they thought they had to; and were unwilling to keep restrictions in place for as long as was needed.

I’ve been very critical of some UK policy making in 2020. There must be a public inquiry into how we’ve handled covid-19, not to blame individuals but to learn the lessons about what needs to be put in place.

The world valued efficiency above resilience. We have to revisit that, not just in public health but in all industries and sectors. We need to invest in resilience. We need surge capacity. We cannot run the NHS and health systems around the world at 105%: in the end they will fall over, as happened in 2020.

It’s also only fair, when people get it right, to give them credit. The portfolio of vaccines that the UK Vaccine Taskforce put together, the distribution of vaccines, and societal engagement have been a remarkable success story.

Has vaccine nationalism surprised you—not least the row between the EU, AstraZeneca, and the UK?

The incident completely surprised me, but you can see why it happened. Vaccine supplies aren’t yet enough. Many of us know people who have died or are sick with covid, and there’s political tension as a result of Brexit as well.

We have to look at supply chains and where we manufacture vaccines. This isn’t just a problem for Europe: there’s little manufacturing in Africa, parts of Asia, and central and South America. We’ll need technology transfer.

Major global providers of drugs and vaccines such as Russia, and particularly China, have a big role to play, as does India. But local access may depend on having more local manufacturing hubs, not only for vaccines but also essentials like dexamethasone and personal protective equipment [PPE], down to the vials that you put vaccines into.

This may create opportunities, as well. Countries with small populations but good manufacturing capacity will have opportunities in global as well as domestic supply: Singapore, Denmark, Senegal, or Ecuador, for example.

Is the UK government heeding your call to share vaccines globally once the UK’s most vulnerable people have been vaccinated?

The argument has shifted in two months from a principle of fairness to a public health and economic imperative.

We’re in a race as this virus evolves. It’s no coincidence that we saw a fairly stable virus in the first nine months of 2020 but three major variants in the past three months as more people were infected. Evolution is essentially a numbers game: the more virus, the more mutations. Evolution is likely to pick up speed: in 2021 we will see new variants with biological advantages that will be selected for if they escape natural immunity and vaccination.

The best way to reduce the chance of variants arising is to vaccinate everywhere as quickly as possible and drive down transmission. It’s entirely reasonable that national governments consider their citizens first—that’s realpolitik.

The US Biden administration is open to this. China is open to this. I think the UK is also open to this. The UK is one of the biggest financial contributors to Covax. But it also needs to contribute vaccine doses. You can donate all the money in the world, but if somebody else owns all the vaccines countries can’t buy them.

Vaccines are important, but we must not forget diagnostics, treatment, and PPE. Oxygen will save more lives in 2021 than vaccines, and supplies to many countries are precarious, which Wellcome and partners are working on.

It’s the same with PPE for healthcare workers. If we don’t protect them we won’t have a health workforce post-covid. And then we won’t have anybody to administer vaccines or for maternal child health, mental health, and everything else.

There’s a global need for diagnostics for existing and new variants, sharing genomic sequencing data worldwide, and treatments for many years or decades to come.

Do you support the strategy of everyone getting a single dose first?

Increasing evidence—particularly from Israel and the UK—shows that, to stop people getting sick, hospitalised, and dying, getting the first dose to as many people as possible was the right decision.

A longer delay between the first and second dose may confer longer immunity: that needs to be studied. We have a responsibility to gather the most robust prospective data we can, ideally openly through randomised trials.

Is robust follow-up possible now that vaccine trial participants have been unblinded for ethical reasons?

Approving vaccine candidates and rolling out early was the right decision. But it comes with risks, and it’s crucial to gather the evidence. The easiest and fastest way of getting the most robust data would be to randomise transparently. If that’s not possible because of policy implications, then the strongest observational data are required.

This follow-up is now difficult, but the UK has a responsibility to the world to do it. One advantage of the NHS is that tracking through general practice and hospitals is extraordinarily good. Data can be shared in unified health systems, which is massively in the public interest. Sweden, Denmark, and Germany can also do this.

Health Data Research UK brings together the data with Public Health England and NHSX from vaccinators, GPs, and hospitals. But there are so many confounders—people on two doses, age, ethnicity, whether you’ve been infected before, and waning immunity.

Should all data be published on vaccine candidates rather than selected results issued by press release?

I’m a bit more relaxed about this than others: there’s a need at the moment for some information to be released right away. But it’s unthinkable that an academic group or a company would not release data until publication in a journal, and the time between a press release and all of the data coming out has to be hours or days, not weeks.

Press releases must be honest to the data, not pretend that data don’t exist. If subsequent data don’t match, people should be held accountable.

When companies submit dossiers to WHO for prequalification the default should be that all of the data are available. But we have to respect some intellectual property rights, and I’m OK if there are proprietary details that cannot be released. But it’s got to be the exception, not the norm.

Can vaccines ever be truly open source and non-profit?

The pharmaceutical industry deserves great credit: it has stepped up, using public money in some but not all cases, and invested in new plants and technologies. There’s no way that we’d have these vaccines without industry.

Johnson & Johnson and AstraZeneca deserve credit for committing to non-profit accounting. In the longer term we’ll have to make covid vaccines non-profit. Governments will have to invest up front in research and development for the vaccines, treatments, and diagnostics that are critical to national and global health and security.

You can’t expect industry, with its commercial drivers, to invest in that. Inevitably, industry will be attracted to developing products where the risk is less or the return is faster. For example, they will get a better return on that investment in cancer care if they’re successful versus disease outbreaks that may never happen or may happen only every 10 years or so. I’d favour a hybrid scheme: de-risked, government funded, but using the skills of the private sector.

This model could also work for things such as drug resistant infections. And maybe there are lessons to learn from other sectors, although not directly analogous to the healthcare or pharmaceutical industries. For example, industry doesn’t carry all the risk of making an aircraft carrier and then think: who should we sell it to? Governments commission such work.

Is WHO fit for purpose to lead us through the next pandemic?

It has improved massively in the past five years, but it’s too constrained by the member states. I’d like to see those states give WHO the power to act in pandemics. WHO should be funded to attract the best public health clinicians, technicians, and scientists from around the world.

I question sometimes whether the member states really want a strong WHO. If they don’t fund WHO properly and give it the status of the premier public health authority in the world then it cannot live up to its responsibilities. To be held accountable for global public health but not have the authority or tools is the worst situation.

How does the pandemic end?

SARS-CoV-2 is now an endemic human infection. It’s not going to disappear. We will learn to live with it as we have done with most other infections. With good tests, treatments, and vaccines, we can turn this into a preventable and treatable disease.

That’s achievable in 2021: on that, I’m bullish. We’ll have a range of vaccines that can be used across current and new variants. The pandemic will accelerate the development of vaccinology, drugs, and diagnostics—not only for covid but also for acute viral infections such as influenza, yellow fever, chikungunya, and dengue, where we’ve needed advances for years.