Clinical trials provide an opportunity to understand not only drug efficacy but also disease biology. Instrumental variable meta-analysis provides an approach to combining results from multiple trials into a single estimate of the effect of modifying a biological target on an outcome of interest.

In our study (doi:10.1136/bmj.n156), we used a novel set of methods to combine evidence from previously reported randomized trials that share a common biological mechanism.1 An instrumental variable approach can be applied to randomized controlled trials to adjust intention-to-treat effect estimates for adherence to randomly assigned treatment. Adherence in this setting is defined as a biological measure of change in the treatment target. These estimates adjusted for adherence can then be meta-analyzed to estimate the effect of the biological target on the outcome of interest. In our paper, we used the example of treatments for Alzheimer’s disease that target amyloid, where adherence is change in brain amyloid levels. Mathematically, the analysis estimates how average cognitive decline among study participants in each randomly assigned treatment group varies with average amyloid reduction in that treatment group. Since assignment to treatment group is randomized, differences between groups cannot be attributed to other factors, so this approach preserves the key advantage of randomization for evaluating causation. We used this approach to combine estimates from all 14 trials with available results on both reductions in amyloid levels and cognitive change.

When and why to use

This method is appealing in the context of multiple randomized trials with evidence of drug engagement with a specific biological target and wanting to draw conclusions about the mechanistic importance of that biological target for patients’ outcomes. Individual drugs might be unsuccessful in clinical trials because the effect sizes are typically too small for any one reasonably sized trial to detect an effect. Conversely, the success of any individual drug should not be considered as evidence for the putative biological mechanism because the chance that a single drug shows a statistically significant benefit increases as more and more drugs targeting the same mechanism are tested. Using conventional statistical significance thresholds, an average of one in 40 trials of a non-effective biological target will appear effective, so it is essential to aggregate results across multiple trials.

In addition to combining results from multiple trials, our method is useful because not all drugs affect the same biological target to the same extent. To evaluate the effect of a specific change in a biological target, we cannot use the intention-to-treat estimate of the effect of a drug because different drugs will affect the target to differing degrees. We must correct for these differences. Although meta-analysis is the most common tool to combine effect estimates, a conventional meta-analysis of intention-to-treat effect estimates is not appropriate in this setting because the effect of each drug on the outcome should be proportional to the effect of that drug on the biological target. Some drugs had relatively large effects on amyloid, whereas others had quite small effects. Any combined analysis must account for the difference in how much each drug influenced the biological target. 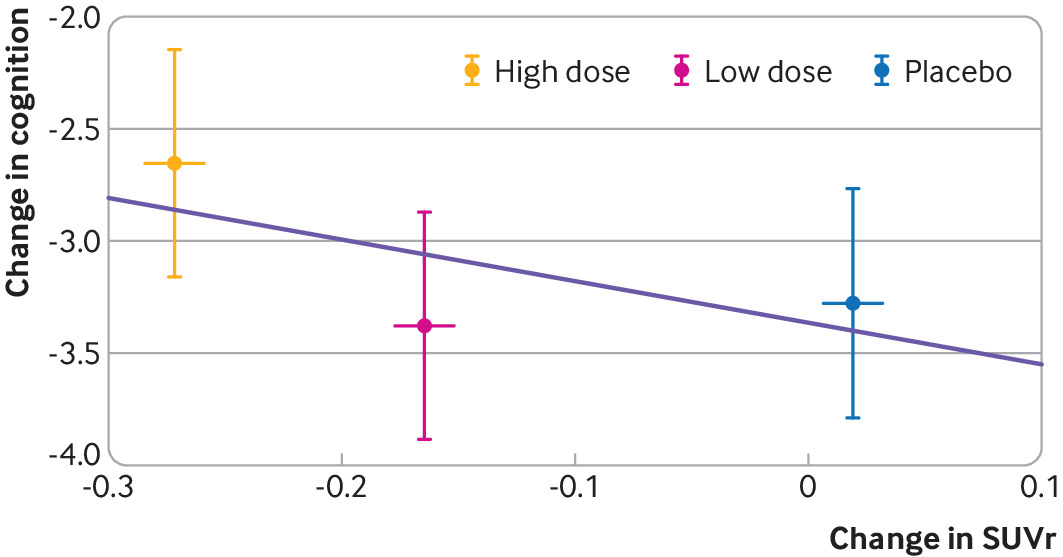 For each trial, we obtain an estimate for the effect of a unit change in the biological target on the outcome of interest. The result from the analysis pools results from all trials for a more precise estimate. We also can obtain pooled estimates from any subset of studies—for example, trials with published data or trials that used a particular outcome measure.

Clinical trials provide an opportunity to understand not only drug efficacy but also disease biology. This method provides an approach combining all results into a single estimate of the effect of modifying a biological target on an outcome of interest. Such a combined result is much more precise than results from any individual trial—for example, the findings in our study indicate that large cognitive benefits of amyloid reduction are unlikely within the time frame of the conducted trials.1

Our methods highlight the importance of full data reporting from clinical trials, including terminated trials, along with consistent measurement and reporting practices across trials. Given the cost and potential harm to study participants of clinical trials and the urgency of finding treatments that work, these data should be leveraged to yield biological insight and accelerate progress towards finding effective drugs.