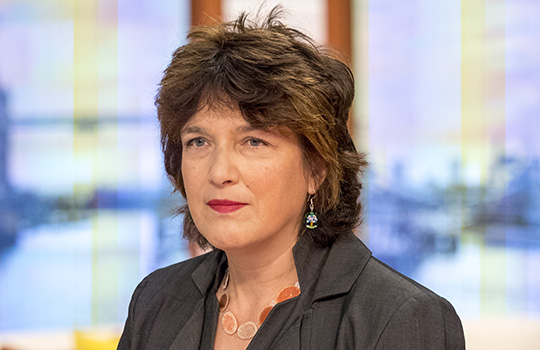 Being a public health doctor means questioning government policy, the Newcastle professor tells Elisabeth Mahase, as she wins a BMJ award for “speaking truth to power”

Allyson Pollock, professor of public health and co-director of Newcastle University Centre of Research Excellence in Regulatory Science, is the 2020 winner of The BMJ editors’ award for “speaking truth to power.” Pollock, who is known for her work against the privatisation of the NHS, has been an influential voice during the covid-19 pandemic, questioning the evidence behind many of the government’s policies, including rolling out mass asymptomatic testing and stopping contact tracing early on.

You are known for asking tough questions and not being afraid to put your head above the parapet. Do you think that’s an important part of being a public health leader?

“I think it’s a really important role as a public health doctor; you are there to safeguard the health of the population. Our primary duty is to the public and the population to reduce the inequities in health and talk about the issues that result in ill health, and that does mean questioning, and often questioning government policies.”

That must cause upset sometimes, especially when you ask difficult questions of your colleagues

“It’s never meant to be personal when you ask about the evidence and the science behind it; it’s about always asking questions and being willing to accept that there are uncertainties. And the more we discuss those uncertainties, and also differences of opinion and view, the better understanding that we have of each other, and I think that sometimes is missing from the scientific discourse. We need to arrive at an understanding of each other’s positions, even if we don’t agree with it, to make progress.”

Where do you get the confidence to do that?

“I don’t think about it as being an issue of confidence. I was very lucky to have qualified in the 1980s, when certainly the politics of the time was still very progressive and there was a great belief in public services and the public ethos and public health. A lot of space was given to people to be dissenting, to think about things in different ways.

“The first real battle that I had to fight was over the private finance initiative. That was really when I first realised the importance of power and politics in these things. So, no matter how rational the argument, no matter how much evidence you produce (in fact, the more evidence you produce), the more likely you are to suffer from an ad hominem attack, personal smears, because [your opponents are] using a political process, not an evidence based one.

“It was very vicious over PFI because there was a lot of money at stake. And there were a lot of people incorporated into the project, including chief executives from the NHS, right down to the managers of the trusts who were not going to get their new hospitals unless they signed up to PFI. Public health has a huge political element to it, because you are taking on enormous, powerful vested interests, whether it be in the pharmaceutical industry, the diagnostics industry, private hospitals, private finance, all the way through.”

How do you cope with negative responses?

“I think the most important thing is to either ignore the person or try to call it out and then to always deal with the arguments on the basis of the merits. If people are making what they believe to be evidence based arguments, actually address them. It’s about having a dialogue. Obviously, there are just rude ones that come on Twitter where they are just calling you names or they don’t like your hairstyle. You just ignore those; there’s nothing you can do about them. But where they really are trying to make a point with a piece of data or a piece of evidence, then engaging with it often results in a dialogue.”

Have the negative responses become worse during covid?

“Under covid it can be very difficult because the politics are such that people in power or positions of authority, whether in hospitals or universities or whatever, they’re actually under the direction of their political masters. And there’s always a certain fear about what will happen to budgets or funding, or perhaps they won’t get the research funding because somebody in their hospital or their university is speaking out. And I think that’s why the principle of academic freedom is very important and universities must defend it to the hilt.

“One of the big changes that’s taking place is how difficult it is now if you work in the NHS. I was much more able to speak in the 1980s about the changes that were happening. But after the internal market was introduced, gradually what began to happen was that you had layers of so called governance. So, for the first time, hospitals were employing press officers. And then you had all these rules around who you could talk to and who you couldn’t. In the 1980s a consultant in public health or in any other speciality could come out and say that my patients aren’t getting these services, it’s abysmal, or the hospital is falling down or the beds are terrible. But now you’ll notice that physicians very rarely speak out and speak up, because they’re frightened to do so, and the whistleblowing procedures now mean that they can be suspended. In the 1980s there wasn’t the climate of fear that there is today.”

The government has been widely criticised for its response to the pandemic. What would you consider to be the worst mistake?

“I think it’s made mistakes from the very beginning. It delayed making covid-19 a notifiable disease—we don’t understand why—and it absolutely failed to follow the statutory notification system and to amend the notification system so that data would come back to local authorities. That’s a mistake for all four nations. They all got it wrong: they didn’t follow the statutory notification system. If they had, we would have had much better community data and we wouldn’t have had the disaster with test and trace. The third big mistake was taking testing out of the health service. It should be administered as part of a clinical diagnosis. This has really set us back.”

Do you think it has done anything well?

“I cannot think of anything that has been done well.”

Have you made any mistakes during the pandemic, or are there things you would do differently now with hindsight?

“One of the difficulties has been knowing where you can be most effective and how you can be most effective. So one of the areas I’ve really neglected has been some of my mainstream work around privatisation and what has been happening with services and capacity. That’s an area I’m turning my attention to now. But there is only so much that you can do, and you won’t know for a few years whether you put your energy into the right thing or the wrong things.”

Some of your work that people may not be so familiar with is on rugby injuries, such as concussion, in schoolchildren. What was it like to work on that?

“I started work on that about 15 or 20 years ago. This was difficult, because I don’t play rugby. I didn’t know anything about the rules of rugby. But I was just observing the harms, at first hand. [Pollock’s son experienced three injuries.] When I investigated more, I was realising what everybody knew. Everybody knows but nobody talks about it. It was a journey of discovery. I think what always surprises me is the vehemence of the reaction to the work that you do. So you’re dismissed because you’re a woman and you don’t play rugby: what right do you have to research rugby? That’s like saying you only have a right to do cancer research if you have cancer. Most of the sport research was conducted by the sporting bodies. So, it’s a bit like the pharmaceutical industry. You can see the parallels with smoking. People who are the most conflicted are the ones who are designing the questions and conducting the research, because there’s no funding otherwise. Nobody was doing any of the work that I was doing outside the sporting bodies.

“I think the most powerful thing to me was that the sport was no different from private finance, from the pharmaceutical industry. But it was nastier and messier because they had so many supporters on the ground.”

What would you do if you were handed control of public health?

“I’d like to see a major piece of legislation to fully reinstate the NHS in England and to integrate health and social care as a publicly funded, publicly delivered, and publicly owned service that is publicly accountable. Social care would extend to good, warden controlled housing for older people, so they’re living in nice conditions and have good staffing as well, which is so central to quality of care.

“In privatising long term care we hived off 1.5 million staff who are mainly on very low pay and are part time, non-unionised female agency staff. By integrating, you’d get this amazing opportunity for staff to cross that health and social care boundary. Why aren’t medical students working in nursing homes? That’s where the frailest people with most morbidities are. They would also stop seeing them just as nuisances or bed blockers and begin to see them as real people. I’m not saying the doctors don’t see people as people, but the pressure to discharge people means you start seeing them as indicators and bed blockers. But when you see them in their own settings, that’s a different perspective.”

How do you feel about winning The BMJ’s award for “speaking truth to power”?

“Winning this award is a great opportunity for me to reflect on and thank the hundreds of people I have worked and collaborated with over the years. This award is as much for them as it is for me. My thanks are long overdue. There are too many people to name, but if you look at my website (www.allysonpollock.com) you will see who you all are. One of the best things about this year has been the opportunities for new collaborations with so many people I have long admired and respected. Special thanks go to Fiona Godlee and the whole team at The BMJ for understanding the importance of speaking truth to power.”

See other articles in issue 8274