The time to act is now: pseudo-systematic review

Objective To identify any medical or public health rationale for claims that the time to act is now.

Study selection Studies that included the claim “time is now” in the title, with or without exclamation marks. No language or date restriction was applied.

Results 512 articles were included for review. No relationship was identified between time to act and disease burden, severity, or specialty. Claims that the time to act was Christmas were almost entirely without basis. A clustering of claims that it is time to act in the first quarter of the year suggested a possible association with New Year’s resolutions.

Conclusions Now is as good a time as any.

“There is almost no such thing as ready. There is only now. And you may as well do it now. Generally speaking, now is as good a time as any”

The time to act is now! This is a commonly used clarion call in medical journals. It can be found in titles of editorials, commentaries, letters, and, occasionally, original research. During 2020 health systems around the world were stretched to breaking point managing the coronavirus disease 2019 (covid-19) pandemic. Nevertheless, we were told that the time is now to standardise sedation training,1 differentiate service delivery,2 certify cardiac anaesthetists,3 address the mental health impact of climate change,4 and end the HIV epidemic.5

Two articles claimed that the time is now to consider universal mask wearing to protect against covid-19 which, to be fair, was timeous.67 Nevertheless, we are concerned about the potentially endless stream of demands placed on health professionals around the world to Act Now! without any obvious rationale, and little regard for competing priorities. Claims that the time is now have doubled in the past decade, from 26 articles published in 2010 to 52 in 2019 (fig 1). We suspect 2020 will be a bumper year. 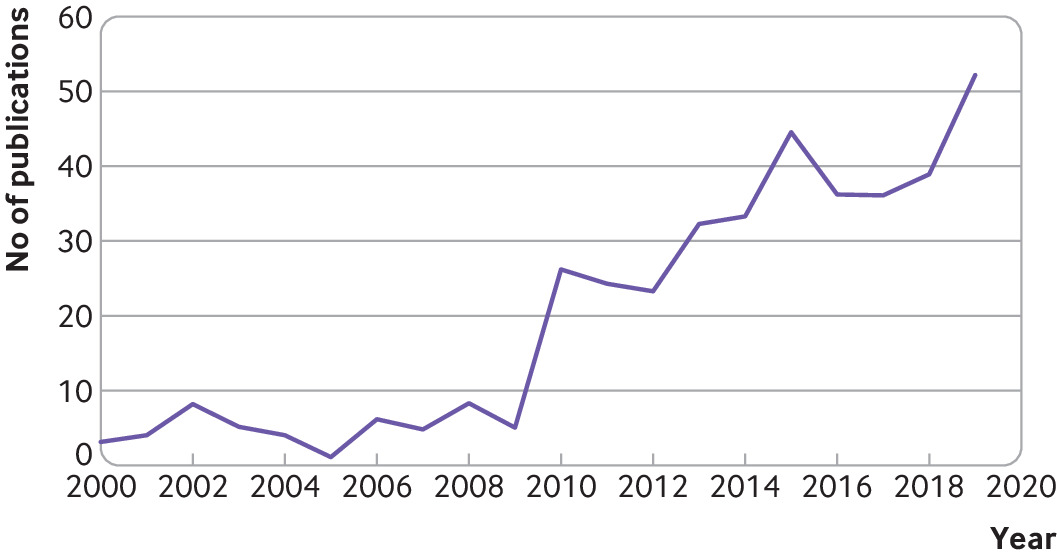 Time is increasingly Now. Claims made in the past 20 years. Data from PubMed

One of us had the idea years ago to undertake a review of papers that claimed the time for action is now. However, there never seemed to be a good time. Each time a new study got published claiming the time for something or other is now, there would be a brief increase in motivation, but this would soon fade. Finally, in May 2020, with nowhere to go and little to do at weekends, we decided it was time to act.

We searched PubMed up to 30 September 2020 for studies that made the claim “time is now” in the title. We intended to search the grey literature via Google Scholar but after an initial screen yielded 6.6 million results we decided to omit this step. We used the General Medical Council list of specialties8 to explore whether levels of impatience differed by specialty. No date or language restriction was applied.

It has been suggested that Christmas time is the season to be lazy.9 We explored which disciplines considered the time to act was Christmas by tabulating articles published on the nearest day to Christmas from 2010 to 2019 (see table 1) and assessed the appropriateness of these claims through visual inspection of results and applying personal opinion.

We were unsure whether authors only wanted people to act now, or whether deferred action was also a desirable goal. We therefore undertook a sensitivity analysis that included the following statements: “the time to act is later” and “the time to act is in a bit.” We carried out subgroup analyses to assess the use of question marks or exclamation marks to provide particular emphasis to the claim that time is of the essence.

No patients or members of the public were involved in the conduct of this review—we assume that the public is not consulted before the authors telling them to act now.

Results: is now the time?

Our initial search yielded 595 titles, of which 512 studies were included for review. On screening of the abstracts we noted that only 16 articles (3%) could be considered related to research, suggesting that claims that the time is now are rarely empirically derived. Of 46 articles claiming the time is now during 2020, only three called for action against the ongoing pandemic—one about serosurveys10 and two about masks.67 The rest either made reference to the pandemic opportunistically to promote a perennial concern, or didn’t refer to it at all.

We excluded 77 studies that used a question mark in the title. Authors asked questions such as: Is now the time for combination therapies for Alzheimer’s disease? Is now the time to abolish breast cancer screening in Hong Kong? Is now the time to set standards for quality of care for irritable bowel syndrome? Is now the time to abolish asbestos?11121314 We are unable to determine with certainty whether the question mark was added to truly express uncertainty. We were, however, aware of the rhetorical “straw man” fallacy, which Wikipedia defines as “giving the impression of refuting an opponent’s argument, while actually refuting an argument that was not presented by that opponent.” We therefore took a convenience sample of 10 of these studies to determine whether genuine uncertainty exists about whether now was the time to act. Study selection was based on being able to access the full text free of charge and without having to bother logging into multiple journal sites using a friend’s library access. We estimated that most of them (7/10) were straw man arguments (data not shown because claim was based more on a feeling).

We excluded one study that asked: Paediatric AIDS—is now not the right time to act?15 because another group of clinicians had beaten them to it by asking exactly the same question the year before, in the same journal16 (the answer, both times, was yes).

We included studies that used exclamation marks, even though most style guides agree that they should never be used.17 We found 50 studies that used an exclamation mark, presumably because stating that the time to act is now was considered insufficient to express urgency. Examples include: Colorectal cancer screening (The time is now!),8 Collaboration between nurses and doctors (The Time is Now!),18 and Next-generation molecular genetic diagnostics in nephrology (the time is now!).19 Thankfully, no studies were identified that used multiple exclamation marks.

The time to act is Christmas

We undertook a subgroup analysis to determine the Yuletide relevance of eligible studies published at Christmas over the past decade (table 1). Of these, only one paper—Alcohol and the elderly: the time to act is now!—could be considered to have some relevance to Christmas. The rest could have been published at any time of year.

The time to act is Christmas

In 2019, 49 published articles instructed that it was time to act, with a clustering of articles in the first three months of the year (19 articles, versus 10 articles for other quarters). While differences are not statistically significant, this upsurge in the first quarter of the year could be associated with New Year’s resolutions.

Differences by specialty: impatience or laziness?

Claims about urgency varied by discipline. The greatest number of papers claiming the time is now were found for oncology (72 studies), surgery (60 studies), and paediatrics (33 studies). Paediatricians were almost five times more likely than geriatricians (seven studies) to claim that the time to act is now, possibly reflecting how critical the passage of time is for children.30 We were unable to find any studies published by dermatologists or ophthalmologists, suggesting that either they were too busy or they did not have pressing issues that need to be acted upon now. There was substantial unexplained within-specialty heterogeneity. Within infectious diseases, 11 studies claimed that the time to act against HIV was now, compared with two for tuberculosis, and none for malaria; this suggests making claims about the time to act has little to do with disease burden or mortality. To corroborate this hypothesis, we found no studies claiming that the time to act against Ebola virus disease is now, despite the disease having a 50% case fatality rate. Possibly, those working on the disease were too busy acting to write about the need to act.

We were unable to find any studies that claimed “the time to act is later” or “the time to act is after a nap,” or “let’s wait a bit.” One study used the words “to do it now or later” in the title, but this discussed the neural correlates of procrastinations and was possibly the only study to ever have meaningfully used the time is now construct.31

Whose time is it to act?

We reviewed 10 articles published since 2017 to determine the level of specificity attached to the imperative to act swiftly. None of these articles specified who was supposed to act, or what they were supposed to do. This risks promoting Diffusion of Responsibility, whereby the probability of anyone acting is diminished as the number of potential actors increases. If everyone is told to act, each individual is more likely to act as a Bystander, to Morally Disengage and—our personal favourite—to Socially Loaf.32

The findings of our review suggest that it is always time to act. An important limitation of our review is that we did not assess whether appeals to act now changed behaviour, including the behaviour of the authors making the claim. Editorials, while potentially powerful motivating materials, are hardly matched by basic efforts to actually conduct the advocated approach.

The claim that the time is now! is rarely found in corrections, for example when authors have had second thoughts about when to act. It is also never found in obituaries. No link is seen between whether the topic in question really does deserve action today, as opposed to yesterday or tomorrow. Our study was limited to claims made in the title. We suspect that if we broadened our search to include, for example, the last line of study conclusions, many more examples would have been found. We doubt however, that any of them would have a stronger basis for their claim.

If it is always time to act, this led us to wonder why the complacency? A rapid search found 40 articles with the words “No room for complacency” in the title. This could be an interesting question for future BMJ Christmas research.

See other articles in issue 8273