Precision biomarkers for mood disorders based on brain imaging

Mood disorders are a global public health problem because of their high prevalence, chronicity, and recurrence throughout the lifespan as well as increased risk of mortality.123 They also impose a heavy economic burden on society because of lost work productivity (occupational disability) and increased use of health services.4 Early diagnosis and effective treatment are therefore essential.

Mood disorders are characterised by a significant change in a person’s state of mood and include two main subtypes: depressive disorders (major depressive episode and dysthymia) and bipolar disorders (hypomania, mania, or cyclothymia—that is, cycling between depressed and manic states). In 2015, over 300 million people were living with major depressive disorder worldwide, representing 4.4% of the global population.5 A world mental health survey reported that the lifetime and 12 month prevalences of bipolar disorders in the general population were 2.4% and 1.5%, respectively.6

Mood disorders are associated with a widespread cognitive dysfunction, involving higher-order executive function,7 reward processing,8 and emotional regulation (fig 1, box 1).10 These deficits are associated with abnormalities in both the structure and function of specific brain circuits. Interest is growing in developing precision biomarkers for mood disorders based on a deeper understanding of their biological bases by integrating multilevels of data, such as brain imaging, clinical symptoms, and cognitive behaviours.1112 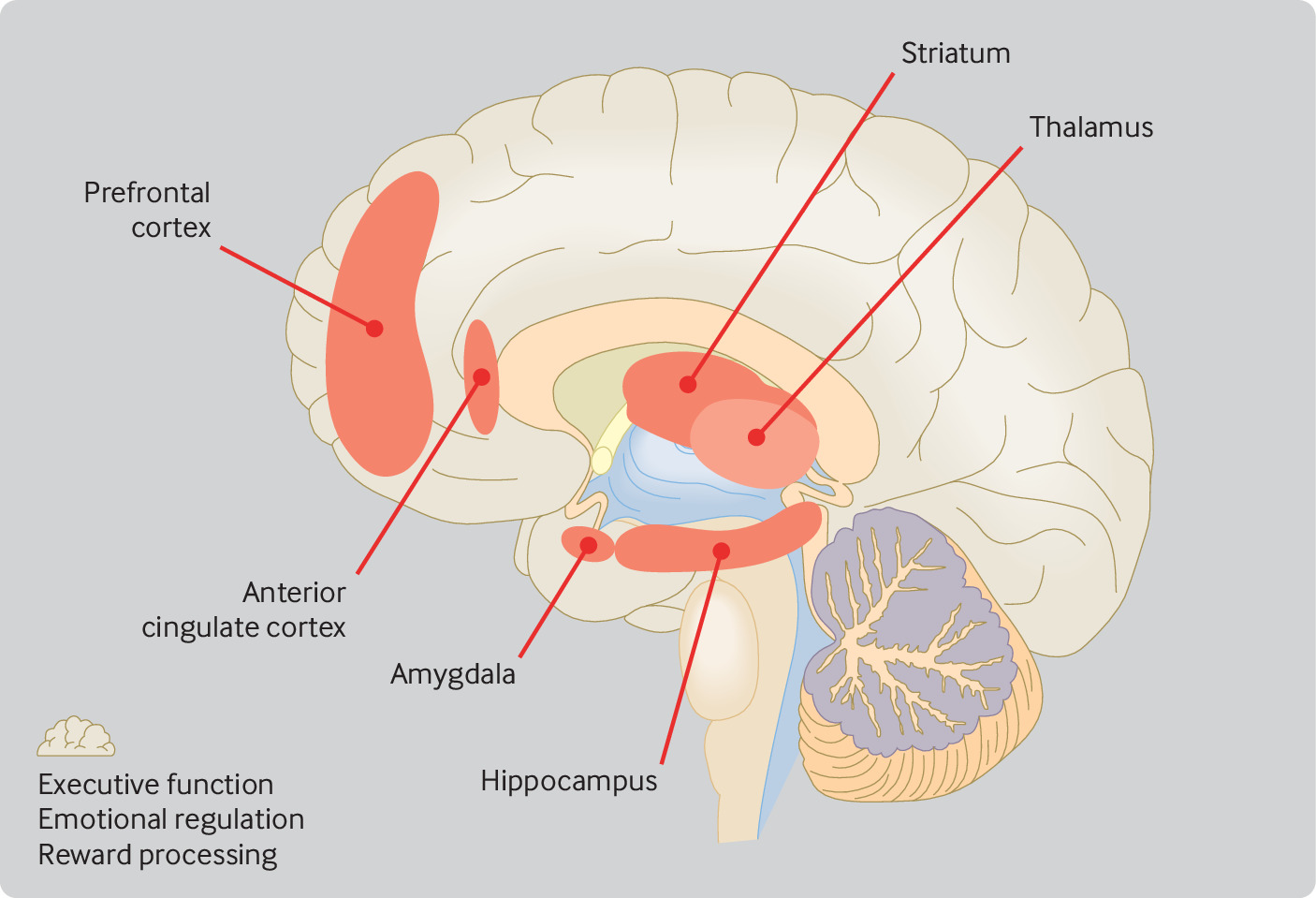 Brain regions underlying executive function, emotional regulation, and reward processing. The figure was made with reference from Wang and Olson9

Current diagnostic systems, including the Diagnostic and Statistical Manual of Mental Disorder and International Classification of Diseases, were developed based on clinical symptoms and signs. The acquired diagnostic categories do not align with the underlying psychopathology or predict treatment response. The diagnostic categories of major depressive disorder and bipolar disorder, for example, share many clinical symptoms, while patients with these diagnoses present with heterogeneous symptoms.17

Clinical symptoms may be shared across mood disorders or with psychiatric disorders. For example, major depressive disorder is commonly associated with anxiety symptoms, but these also occur in bipolar disorder and schizophrenia. Recent studies have used brain imaging and transdiagnostic approaches to characterise the neural basis of the shared symptoms.171819 Resting state fMRI data showed that patients with major depressive disorder, bipolar disorder, and schizophrenia had common brain functional deficits.18 More generally, recent studies proposed a general psychopathology factor (p factor) to describe a shared vulnerability to a broad range of symptoms across mental disorders,20 and a higher p factor was associated with diminished activation of the frontal pole, anterior cingulate cortex, and anterior insula during executive tasks.19 The imbalance in these brain circuits is believed to confer vulnerability to mood disorders as well as other mental disorders, which could be the underlying mechanism of the shared symptoms. Other specific brain circuits related to factors such as anhedonia may therefore give rise to specific diagnoses such as major depressive disorder.

Heterogeneity is also a problem in the current diagnostic system. Mood disorders are increasingly viewed not as a unitary disease but as a heterogeneous clinical syndrome that encompasses multiple subtypes with distinct pathophysiological deficits. Interest is therefore growing in parsing the neurobiological heterogeneity of mood disorders.17 Drysdale and colleagues subdivided major depressive disorder into four discrete biotypes using a clustering approach, each type defined by distinct patterns of dysfunctional connectivity in the limbic and frontostriatal systems.21 Rather than dividing mood disorders into discrete categories, dimensional approaches are able to parse them into several dimensions using brain imaging, with each dimension representing loadings onto symptoms.17 Dimensional approaches can account for the continuous spectrum from health to disease by including people at risk of illness and considering diagnosable cases as an extreme phenotype. Consistent with these efforts, the US National Institute of Mental Health research domain criteria1112 framework invited the scientific and clinical communities to integrate brain imaging, cognition, and clinical symptoms to develop a novel biologically informed nosology and precision biomarkers for mood disorders.

Precision biomarkers need to be detected at an early stage in the progression of mood disorders to facilitate early intervention. Accurate identification of the time of onset of a disorder is essential for achieving this goal. Clinical symptoms of mood disorders usually begin in youth, with the mean age of onset being 14.9 years for major depressive disorder22 and 20.2 years for bipolar disorders.23 Therefore, youth—defined as ranging from childhood to early adulthood—is a critical period for diagnosis and implementation of suitable interventions.

Youth is also a period of considerable brain development, and atypical brain developmental trajectories are related to clinical symptoms and cognitive dysfunction in patients with mood disorders.26 For example, longitudinal high resolution MRI showed that relative to healthy youths, those with bipolar disorder had a greater grey matter volume contraction and less white matter expansion in the prefrontal cortex during development.24 Xia and colleagues found that mood symptoms were related to dysconnectivity within the frontoparietal system and the pattern of dysconnectivity was strengthened from childhood to adulthood.25 Based on these findings, scientists increasingly conceptualise mood disorders as neurodevelopmental disorders.26 An understanding of the atypical brain development in patients with mood disorders could allow identification of a biologically informed time of onset for mood disorders, which might be earlier than the onset of clinical symptoms.

Dense sampling shows particular promise for precise characterisation of the atypical development of brain functional organisation in patients with mood disorders. Typical fMRI acquisitions last 5-10 minutes, and may be adequate for characterising group average functional organisation. However, such short acquisitions have limited reliability for describing an individual’s brain functional organisation in detail.2728 Recent studies have shown individual variations in the topography of brain organisation that are obscured in group level organisation and can only be reliably detected using dense fMRI scanning data.272930 Dense fMRI protocols acquire a much longer time series of fMRI data on one person, which can be acquired by repeated scanning in multiple sessions. Such protocols reveal specific topography details for individuals that are both reliable and reproducible and could be useful in identifying precision biomarkers for mood disorders.31

Recently, Cui and colleagues used 27 minute fMRI acquisitions, which is much longer than traditional acquisitions, to show that the topography of brain functional organisation is refined during youth.32 Such characterisation of typical brain development in youth is a prerequisite for understanding differences in brain development in mood disorders. Results also showed that the individual variation in brain functional organisation predicted executive function,32 which is typically impaired in mood disorders. These findings suggest that the topography of functional organisation revealed by dense fMRI scanning could be helpful in understanding the atypical neurodevelopmental trajectories of mood disorders. However, dense fMRI scanning data are still lacking for healthy youths as well as for youths with mood disorders, and the neuroscience and psychiatry communities should concentrate on this effort.

As well as dense fMRI scanning data on individuals, data from large samples are also essential to characterise how mood disorders differ from the typical brain developmental trajectory. The research community has publicly released several youth datasets with large sample sizes, such as the Philadelphia neurodevelopmental cohort (box 2).33 The Philadelphia cohort includes young people representing a spectrum from a healthy to a diseased state and is therefore a great resource for identification of the time of onset of mood disorders. Future efforts should collect datasets with both a large sample size and dense fMRI scanning to better characterise the time of onset.

Identifying early biomarkers of treatment outcomes is vital for evaluating treatment strategies for mood disorders. A recent theory of antidepressant drug action—the cognitive neuropsychological model—suggests that drugs do not act primarily on mood but rather modify biases in the cognitive processing of emotional information in the brain (fig 2).3435 fMRI has been used to study changes in the brain associated with positive or negative biases in emotional processing that occur when patients with mood disorders and healthy volunteers take antidepressants. For instance, Godlewska and colleagues36 found that, compared with placebo, treatment with the antidepressant escitalopram for 7 days normalised neural responses in patients with major depressive disorder by reducing the response of the amygdala to negative stimuli (fearful facial expressions). Importantly, the neural changes seen during the early stages of antidepressant treatment were independent of subjective mood changes, suggesting that antidepressant drugs act directly on neural functions that are relevant to major depressive disorder before producing any effects on mood.

Antidepressants produce positive biases in emotional processing from the start of treatment. This is an automatic effect which does not affect subjective mood state immediately (BDNF=brain derived neurotropic factor, mTOR=mammalian target of rapamycin)

Interestingly, studies have consistently shown that antidepressant induced early changes in neural response to emotional processing tasks predict treatment outcomes.37 A recent study assessed changes in neural response to emotional facial expressions before and after 7 days of treatment with escitalopram in 35 patients with major depressive disorder who had not previously had drug treatment.38 Based on the criterion of 50% reduction in depressive symptoms at the end of six weeks’ treatment, 22 patients were classified as responders to the treatment and 13 as non-responders. Compared with the non-responders, responders showed decreased neural activity to fearful versus happy faces in the amygdala, insula, anterior and posterior cingulate cortices, bilateral supramarginal gyri, and thalamus. These results suggest that early changes in neural responses to fearful faces are predictive of clinical response to treatment for major depressive disorder.

Studies of neural responses could therefore be useful in testing the efficacy of novel drugs in both patients and healthy volunteers. Neural responses could also serve as an early biomarker of treatment efficacy and improve understanding of mechanisms of action, including those underlying drugs targeting N-methyl-D-aspartate receptors (such as ketamine37). Candidate drugs are typically screened using animal models, which have low predictive validity, and a lack of efficacy in translation to humans is the main reason for failure in drug development.39 Ensuring that new drugs affect the core measures of emotional or cognitive function during the early phase of drug development could reduce costs of failed clinical trials. A better understanding of the cognitive neuropsychological effects of psychopharmacological drugs and using neural assessment to predict treatment response may in future allow better patient stratification for mood disorder treatment.

Development and validation of precision biomarkers for mood disorders is urgently needed for early diagnosis and treatment evaluation. However, the overlap and heterogeneity in mood disorders impede this progress. Brain imaging, which can detect brain structural and functional changes, is one promising way to solve this problem and identify biomarkers that can cut across different facets of disorders of mood and emotion. This will require a combination of brain imaging, cognitive neuroscience, experimental modelling, and computational techniques (box 3). We encourage the close collaborations between a diverse research community for this endeavour.

We thank Ying Wang for help with the figures.