Tackling gender power relations is key to ensuring the safety and wellbeing of health workers and the ability to deliver quality care, say Asha George and colleagues

Twenty five years ago the Beijing Platform for Action for Women advocated for women’s rights to health. In doing so, it recognised women as important providers of healthcare and not just as users of it. Since then, attention to the predominantly female composition of the health workforce and the central role of health workers to global health, and to economies more broadly, has increased.1 Nevertheless, the potential contribution of female health workers to advancing global health remains inhibited by several factors, including those underpinned by gender power relations. One of the more extreme and harmful forms of abuse of gender power relations is the violence perpetrated against female health workers. Such violence continues even as health workers respond to the covid-19 pandemic.2

Violence in the workplace is defined as “Incidents where staff are abused, threatened or assaulted in circumstances related to their work, including commuting to and from work, involving an explicit or implicit challenge to their safety, well-being or health.”3 Workplace violence affects all health workers, but it is particularly harmful to women. Gender power relations and their intersectionality with other factors, such as age, ethnicity, and income, are associated with the form and source of violence experienced by female health workers but are often hidden like the base of an iceberg (fig 1). Despite the structural causes of violence against health workers being recognised over two decades ago, the widespread prevalence of the problem throughout the health workforce hierarchy and its gendered roots continue to be ignored (box 1). 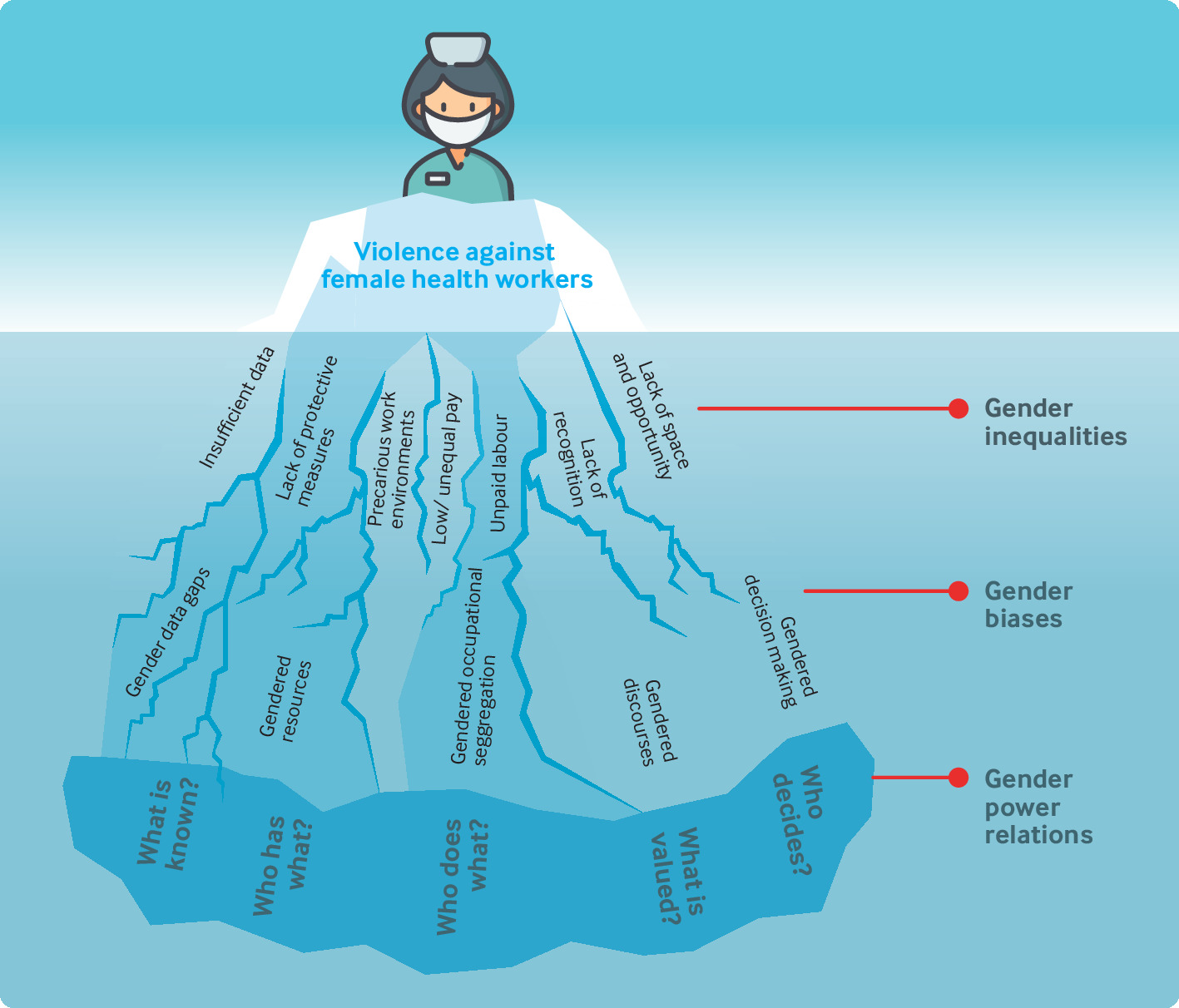 Reports suggest that health workers are targets during emergencies:

Violence against female health workers in the workplace undermines their confidence andundercuts their ability to progress in their careers or be promoted to the leadership positions from which they could prevent and curtail abuses of power. The long term effect of violence against health workers is burnout and moral distress, which leads to absenteeism and attrition. In addition, fewer women may not choose to pursue health occupations if workplace violence is not adequately addressed. Eventually this could impede efforts to meet the global shortfall of health workers. The resulting vacancies place additional stress on remaining health workers and can further undermine their ability to provide quality care.

We build on Batliwala’s feminist analysis13 to focus on five key dimensions of how gender power relations undermine female health workers and heighten their vulnerability to violence in the workplace (fig 1). This includes what is known (visibility), who has what (resources, policies), who does what (division of labour), who is valued (social norms and discourse), and who decides (agency, leadership).

Although tools have been developed to measure workplace violence, they are not routinely used in health facility surveys. Under-reporting within existing efforts to measure workplace violence is also a problem, creating a misperception that sexual harassment cases are rare.14 Violence against female health workers may be under-reported because of stigma around reporting or because it is perceived as normal practice. The lack of visibility undermines the ability to champion reform.15 Insufficient data on violence against female health workers echoes a broader lack of prioritisation to measurement and acknowledgement of women’s experiences and contributions to healthcare.16

Safety in the workplace has varied meanings and requirements for women and men across the health workforce. Different occupations may be exposed to different physical and psychological risks across diverse healthcare settings. For example, informal community led care is predominately provided by women, who are often from poorer communities with less access to education or paid employment. They are less likely to have access to personal protective equipment than surgeons in a tertiary hospital, who are more likely to be men. In addition, the male norm used for designing protective equipment is an example of bias against all female health workers and for male health workers who don’t fit the norm. The importance of access to protective equipment for health workers is evident in crises such as the covid-19 pandemic and Ebola outbreaks.

Another reason why female health workers fail to report violence or advocate for safe working conditions is the gendered economic risks they face. Female health workers, particularly those from marginalised groups, are often in more precarious or part-time contracts with lower remuneration and benefits, even when in the same occupational group as men.2021 Strikingly the gender pay gap in the health sector is larger than the average of all labour sectors combined.21

The nature of the health labour market can also reinforce particular gender dynamics. In countries with low ratios of health workers to patients, such as Pakistan, the high demand for their skills means women find it easier to switch jobs than report victimisation.22 In contrast, in Mexico the increasing numbers of trained health workers and a restrictive policy of permanent positions in the public sector make it more difficult for nurses to get and maintain jobs.23 Female nurses may therefore fear the ramifications of reporting workplace violence.

Not only are female health workers placed at greater economic risk than male health workers, they also tend to work in more precarious and unsafe settings. Midwives and specialist primary care nurses often work night shifts by themselves in patient’s homes.24 Female health workers, particularly community and other field health workers, are responsible for outreach services or are based in remote locations, which also exposes them to violence.102526 This occupational vulnerability is heightened by the broader gendered occupational segregation that occurs in healthcare.27

The professional and economic hierarchies that constrain all female health workers, but particularly those from marginalised backgrounds, normalise and mask a broader lack of recognition of female health workers’ needs or even disrespect for their skills and expertise. For example, in South Africa, female community health workers’ gendered professional and personal needs were not articulated by policy makers.28 At a broader level, the discourse around many female dominated health occupations, such as nursing and midwifery, as a caring versus curing profession, has historically justified its subordination to medicine and ignores the importance of caring for physical and emotional healing. Nurses and midwives tend to lack professional autonomy within the health workforce24 because their capacities and skills are generally not recognised or valued by medical and institutional hierarchies.152930

Gender power relations are further reinforced by the constraints placed against female health workers in terms of their agency, leadership, and ability to mobilise collective action to defend their interests. Discriminatory gender norms make women feel they are not of equal merit, which can lead to self-censorship.31 Additional layers of social stigma exist within the health workforce in countries such as Pakistan, where women opting for nursing are usually from lower income groups and religious minorities. In our experience, this adds to the occupational hierarchies faced by female health workers. Lack of investment in women’s professional development and leadership skills, even when they are included in decision making forums, inhibits them from advocating their case.32

Following Batliwala’s categorisation of power,13 if female health workers are to wield power to transform the gendered nature of workplace violence, they require several other forms of power. They must have the “power within” to believe in their capabilities and expertise despite the many forms of hierarchy they face in their workplace. They must have “power with others” to build effective coalitions to support collective action to address their interests. Finally, they must have “power under” their control, rather than being used or drawn into broader power dynamics. Given their experiences of marginalisation, female health workers are not inherently agents of transformation2933 unless supported and held accountable for being such agents.

Action is needed in three areas to break up the iceberg of gender power relations that interferes with female health workers’ rights, responsibilities, and roles in global health and exposes them to violence. Firstly, building an understanding of the shared nature of the problem is critical. Violence against female health workers, like all women’s issues, is not just important for women. It affects all health workers, all healthcare environments, and our ability to effectively expand and improve healthcare services to rise to the challenge of universal health coverage. More resources dedicated to understanding the extent, nature, and basis for change are required. Apart from better reporting, participatory initiatives that use other ways of understanding and reframing the problem are also needed to tackle ingrained gender biases.34

Secondly, professional associations, organisations, and regulatory bodies that governhealthcare and the health workforce require leadership that is more representative of gender, occupation, and other relevant social backgrounds. Most countries have a chief nursing and midwifery officer,35 and governments need to expand these roles and ensure they are coupled with leadership training enabling the officers to advocate for reducing gender imbalances. Professional associations, UN agencies, and non-governmental organisations must coordinate action, give visible support, and enforce zero tolerance for workplace violence. This includes supporting the International Labour Organisation’s 190th convention, which recognises everyone’s right to a world of work that is free from violence and harassment, including gender based violence and harassment.36

Finally, we must empower women in the health workforce to find their voice and participate in this coordinated action. Now is a good time in which to focus on this problem as 2020 is the International Year of the Nurse and the Midwife, celebrating 200 years since the birth of Florence Nightingale, an extraordinary woman who challenged the status quo and advanced the professionalisation of nursing and midwifery. The ILO Convention 190 has been ratified and the Beijing+25 event marking the anniversary of the Platform for Action for Women provides an opportunity for health and social sectors to advance the various gender reforms required to honour the calls for women’s empowerment and gender equality. We must support these currents of change. The ambitious goals set to achieve universal health coverage, especially given the realities of covid-19, cannot be met unless the rights of women who are responsible for delivering such care are acknowledged, protected, respected, supported, and promoted.