Climate change and biodiversity loss are among this century’s greatest threats to human health and are exposing people worldwide to increasing food and water insecurity, extreme weather, pollution, and infectious disease threats.12 Zoonotic infectious diseases are situated at this nexus between environmental change, ecosystems, and health. Zoonotic pathogens and parasites are maintained in an animal reservoir and regularly or sporadically spill over to cause disease in humans,3 sometimes leading to sustained human-to-human or vectorborne epidemics (eg, severe acute respiratory syndrome coronaviruses (SARS-CoV), Ebola, plague) but more commonly to endemic or sporadic disease (eg, leptospirosis, helminthiases, Lyme disease, hantavirus diseases).

Animal-to-human transmission (spillover) is influenced by environmental and socioeconomic processes that reshape reservoir host communities and bring people and livestock into contact with wildlife, such as shifts in land use and food systems, deforestation, and climate change. As these pressures have escalated worldwide in the past half century, zoonoses from wildlife have been emerging at an increasing rate.4

Indeed, 2020 will be remembered for several zoonotic crises, including the global pandemic of SARS-CoV-2, two concurrent Ebola outbreaks in the Democratic Republic of the Congo, and the highest ever Lassa fever surge in Nigeria. Severe outbreaks like these profoundly affect public health, societies, and economies, which is why zoonoses are often viewed through the lens of pandemic preparedness.

However, such high profile events occur against a backdrop of a substantial burden of endemic disease that has long term effects on structurally vulnerable communities in low and middle income countries.5 Many of these communities are also disproportionately exposed to hazards associated with rapid environmental change (eg, deforestation, urbanization, extreme weather).67 Since global climate mitigation efforts currently seem unlikely to prevent significant warming,8 regional and national adaptation strategies will be crucial to protect public health and build resilience to future zoonotic risks. Perspectives from ecology can inform efforts to prevent and respond to specific diseases and support disease management within a broader ecosystems context. 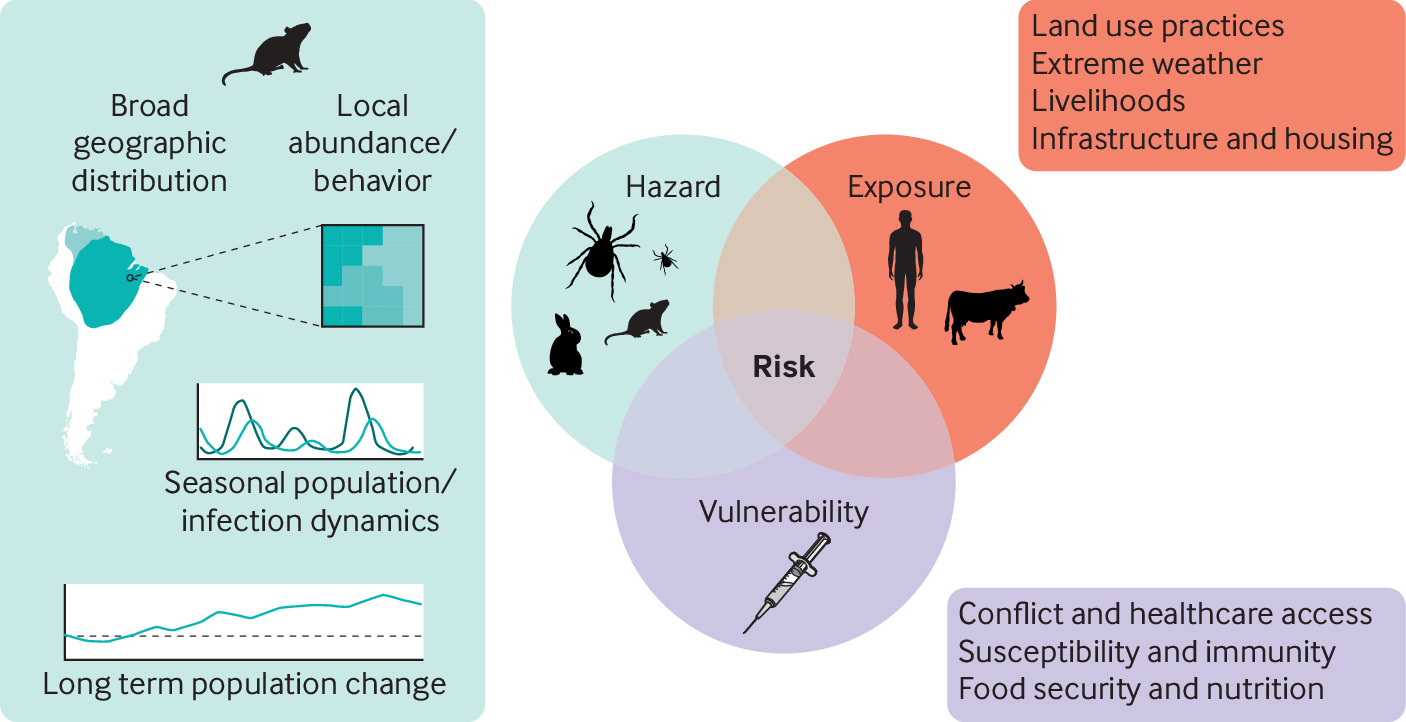 Effects of global environmental change on zoonotic disease hazards and risks. Inset boxes highlight key socioecological processes through which climate and land use changes can affect hazard, exposure, and vulnerability. For example, zoonotic hazard (underlying potential for pathogen spillover) is a consequence of changes in reservoir host and vector distributions, abundance, and host-pathogen dynamics (example shown for a hypothetical rodent species)

Risky interfaces between people and reservoir communities are complex, dynamic, and pathogen specific (table 1), with interactions among hosts, vectors, pathogens, and environments driving geographic and seasonal trends in the potential for spillover to people. Understanding these trends is crucial to predicting where and when human infections are likely to occur. However, the degree to which hazards become realized risks also depends on factors that drive human exposure (eg, land use practices, hunting, housing and sanitation, extreme weather) and vulnerability to infection (either individually or at population level—eg, nutrition, access to healthcare).6

For instance, although rodents worldwide carry Leptospira bacteria, most human leptospirosis occurs in poor agricultural and urban communities with high exposure to rodent contaminated environments.9 The One Health framework has conceptualized these links between human, animal, and ecosystem health, but most research has focused on human-animal (especially human-livestock) interactions in relatively localized settings.14 Scaling up the results of such localized studies to inform national and regional policy to prevent or respond to zoonotic outbreaks is challenging because of the socio-ecological complexity of zoonoses and histories of sporadic detection of many diseases.

Even when long term systematic case surveillance data exist for neglected and emerging zoonoses, their observational nature and geographic biases make it difficult to disentangle the relative influence of ecological and socioeconomic changes on disease incidence. For example, there have only been about 25 confirmed human Ebola virus spillover events since 1976; such a small sample makes it difficult to infer drivers and risks of future spillovers from human epidemiologic data alone. Framing the ecological aspects of zoonotic disease systems (eg, reservoir host and vector population responses to environment) as natural hazards7 can help overcome this difficulty. Existing data sources on host and pathogen biology, ecology, and biogeography can be used to inform the assessment of current and future risks. Modeling approaches that incorporate ecological processes are gaining traction in vectorborne disease and climate change research1516 and can improve our understanding of how global change will affect zoonoses more broadly.

Ecological theory and approaches are already embedded in epidemiologic and public health understanding of many zoonoses. They have been instrumental in many disease control programs, such as the eradication of rabies in wildlife in Western Europe17 and management of leptospirosis and dengue in urban areas.1819 Under future climate change, ecological knowledge will be increasingly important to support both short term health policy (eg, forecasting for prevention and prioritizing clinical resources) and long term decisions (eg, strengthening health systems and diagnostic capacities, and targeting vaccinations).

One potential application is to predict seasonal risk of zoonoses from environmentally linked demographic and infection dynamics among reservoir species.20 For example, surveillance of yellow fever in non-human primates has already been used to inform human vaccination strategies in Brazil, leading to fewer cases in municipalities using this early warning system.21 Models that integrate ecological or biological knowledge of important reservoir or vector species with near realtime climate and earth observation data can inform forecasts of certain zoonotic hazards weeks or months in advance. Seasonal variations in temperature and water availability (which affect persistence of mosquito host populations) have been used to predict outbreaks of Rift Valley fever in east Africa and facilitate mitigation activities.22 Similarly, human surges in rodent borne hantavirus disease in China23 and Europe24 follow predictable host population cycles linked to rainfall and vegetation.

In future, climate change trends and extremes may disrupt natural seasonal changes to ecosystems,25 with potential for unexpected effects on reservoir hosts and infection hazards. Integrating ecological forecast models into health planning could support preparedness for such surges in risk, including for high burden zoonoses such as Lassa fever in west Africa (table 1). Indeed, climate based early warning systems already support prevention strategies and health planning for well monitored vectorborne infections such as dengue.26

In the longer term, the coming decades will see huge worldwide changes in biodiversity as changing climates and pervasive human transformations of natural landscapes (eg, agricultural expansion, urbanization) restructure and homogenize wildlife communities.27 Changes in reservoir and vector distributions can move diseases into new areas. For example, the geographic expansion of Ambylomma americanum ticks between 1993 and 2013 was correlated with increasing incidence of tickborne rickettsiosis in the US.28 Such responses of reservoir, vector, and host-pathogen biology to environmental pressures will vary among species, leading to complex effects on future hazards that may differ widely among diseases and locations.29

For instance, by 2070 some geographic areas (often temperate regions) are expected to become more climatically suitable for mosquito transmission of dengue and chikungunya and other areas (especially in the tropics) less suitable.15 Crucially, these changes will often intersect with existing or emerging climate related vulnerabilities to spillover and epidemics (eg, food and water insecurity, extreme weather; table 1).

Scenario based evaluation of future geographic changes in hazard for multiple zoonoses, and analysis of uncertainty between different future climate, land use, and disease models,30 could support long term strategic planning in health and environmental sectors (see examples in table 2). Recent advances in combined ecological-epidemiological models show promise not only for projecting zoonotic risk responses to future environments (based on multimodel climate forecasts) but also for testing the effects of interventions on spillover and epidemic thresholds.121331 Similar approaches are increasingly used in biodiversity planning—for example, the design of spatial conservation programs that account for future climate change uncertainty.32 More immediately, improving systematic and community based disease surveillance, especially in areas with rapid changes in land use or climate, will be vital to early detection and response for known and novel infections.33

Toward ecosystem based approaches

A challenge to integrating ecological knowledge into decision support is the lack of understanding and data on key biological, ecological, social, and geographic features of many zoonoses and their reservoir hosts (including for priority diseases such as viral hemorrhagic fevers). Tackling this requires integration of knowledge, evidence, and research programs across ecological, social, and health domains.3334 The development of open access platforms to bring together data that already exist (eg, wildlife, livestock, and human serological surveys) could support analyses of future zoonotic disease responses to environmental change.

More broadly, including ecological expertise in public health research and design of policy—and vice versa—could fill gaps in data and improve programs to prevent and control infectious disease.35 Multidisease, socioecological, and health based studies of reservoir communities, vectors, and human infection rates along landscape and climatic gradients (eg, from natural to agricultural and urbanized systems) can provide models for how future environmental changes will simultaneously reshape zoonotic hazards, exposures, and vulnerabilities.36 Ongoing transdisciplinary research into zoonotic malaria in Malaysia (table 1), for example, shows how such approaches can identify communities, livelihoods, and locations at greatest risk, particularly for understudied diseases.11

The covid-19 pandemic has again focused attention on the drivers of the emergence of new zoonoses and has triggered calls for broadbrush interventions such as bans on hunting or wildlife trade to curb the risks of spillover. Yet such blanket proposals risk ignoring the complexities and local contexts of zoonotic disease systems, and the many direct and indirect ways that ecosystems contribute to health (and, in turn, susceptibility to disease; fig 1). The “nature’s contributions to people” model in ecology2 and health based frameworks such as Planetary Health,37 recognize that zoonotic hazards are part of a broader environment-health nexus alongside other crucial ecosystem outputs (such as food and water security). Understood in this way, zoonoses are concerns not only for health policy but environmental policy more generally (table 2).

The future presents difficult challenges for decision makers, especially, but not only, in economically marginalized regions where many communities depend directly on wildlife and ecosystems for their wellbeing. How should landscapes be best managed to balance trade-offs between food production and natural regulation of zoonotic hazards (eg, reservoir host and vector populations), while supporting sustainable, healthy livelihoods that maximize resilience to the effects of climate change? Questions of this kind are rarely considered for zoonoses, even though analyses of such trade-offs are common in ecological science2—for example, between crop production and carbon sequestration.

These complexities highlight the need for more adaptive, ecosystem based interventions to help manage zoonotic hazards and risks across multiple areas of policy (table 2).33 Single disciplinary interventions are unlikely to be able to deal with the dynamic, moving target nature of zoonotic systems under global environmental change.33 Such a perspective is concordant with the increasing recognition in biodiversity sciences, emphasized last year by several authors from the Intergovernmental Panel on Biodiversity and Ecosystem Services, that tackling economic inequality while preserving ecosystem functions on which human wellbeing depends will require “transformative change” away from the current extractive global economy toward more sustainable relations to nature.2

Integrating ecological perspectives on zoonoses into national and regional public health action plans, as well as other policy sectors dealing with climate adaptation (eg, agricultural policy) would be a step toward reducing the global burden of zoonoses while building broader health resilience to the effects of climate change.