Understanding the US failure on coronavirus—an essay by Drew Altman

The world has been staggered by the US’s disjointed response to covid-19, resulting in by far the highest case and death count globally. The die was cast by two fundamental policy decisions taken by the Trump administration, writes Drew Altman

On 9 August, the US passed the five million mark in cases of covid-19, representing slightly more than a quarter of all global cases. That day, more than half the states in the US qualified as coronavirus hot spots.1

The same day in South Dakota, the small town of Sturgis with a population of less than 7000 prepared to welcome 250 000 bikers to its annual biker rally. With no social distancing or face masks required by that mostly conservative rural state, it would be the largest known public gathering in the world in the middle of the covid-19 pandemic.

At the same time, 40 million Californians were living with that state’s mandatory mask order imposed by the governor when the state’s decision to open up its economy led to a resurgence in covid-19 infections.

In Georgia, the Republican governor and the Democratic mayor of Atlanta continued to spar over the mayor’s desire to take more stringent measures to protect public health than the governor, a Trump loyalist, wanted to allow. Similar tensions between Democratic mayors and pro-Trump Republican governors were playing out in Texas and Florida, two large states where cases of the virus were increasing.

In New York, where the state had come through the worst epidemic in the US after deploying strict public health measures, the infection rate was low enough that the governor, whose daily press conferences had become national television events, announced he was ready to open schools.

And so goes the American response to covid-19: a patchwork of responses by state and local governments, divided sharply along partisan lines.

Our lamentable performance is not the product of a famously fragmented, market driven healthcare system. The US medical system has in many ways performed well and even valiantly, increasing capacity when needed, and saving lives when possible. Uninsured people and working people are faced with much higher out-of-pocket costs and surprise costs than they are in other countries, but our deaths per case of covid-19 compare favourably with other developed nations that have significant numbers of cases.2 We celebrate our heroic frontline workers with cheers and applause just as other countries do.

No, the disappointing US response to covid-19 has been because of a failure of policy and leadership, not healthcare, and largely owing to two fateful policy decisions.

The federal government as back-up

After first casting himself as a wartime president, in April President Trump made a fundamental policy shift that has shaped the US response to the pandemic ever since. He announced that states would have primary responsibility for containing the virus, with the federal government in a “back-up” role.3

A state role in public health is traditional in the US, and any national plan would allow for customisation to reflect regional and state circumstances. Delegating primary responsibility to states in a crisis is unprecedented. It was, as far as I know, the first time a sitting US president has sought to decentralise authority and responsibility during a national crisis.

The motivation for the policy shift was never clearly articulated. While consistent with conservative principles to let state and local governments customise solutions to local circumstances, it may also have been an effort, however futile in retrospect, to offload political accountability for a growing pandemic with the presidential election looming.

As a former state commissioner of human services experienced in the vagaries of state government, I felt at the time that the consequences were predictable. On 5 April, I tweeted4:

“This is the result when you leave it to states to decide what to do on their own with the federal government as “back-up.” Pacesetters, a muddled middle, and laggards, often in the South. The consequences this time may be tragic.”

In practice the ramifications were even more complex, with states, counties, and cities all filling the vacuum created by the lack of an overall national response.

The US has 3141 counties. Some are rural with no health departments; others are as large as states and have health directors with strong independent authority to implement public health measures, such as stay-at-home orders. Three hundred cities in the US have populations of 100 000 or more. In some jurisdictions, county and city authorities overlap. A city may deliver health services and a county may control public health. A school system may operate independently of both. Virtually every combination exists across the country.

In the absence of a centralised federal response, this fragmentation resulted in extreme variation in our national response to covid-19 by and within states. For example, at the time of writing, 33 states had instituted mandatory mask orders, while other states imposed softer orders or none at all.5

This led directly to the second fateful policy decision shaping the US response: the Trump administration’s decision to push for an opening up of the economy before the virus was contained—and the fracturing of the country along partisan lines in response.

Initially, the White House sought to impose so called “gating criteria” to be met by states before they opened up.7 These guidelines could have imposed greater discipline on the fragmented response of state and local government. But the criteria were abandoned with the president pushing initially for opening up as early as Easter, then moving that timetable back in the face of pandemic reality.

The response has been the defining and most troubling characteristic of the American response to the pandemic: the states and the American people split strikingly along partisan lines in their response to covid-19, as if the country has both red and blue pandemics. When that happened, the public’s willingness to prevent the spread of the virus substantially collapsed across red America.

The partisan divide can be seen on almost every dimension of the epidemic. Democrats are about twice as likely as Republicans to say the worst is still yet to come on the pandemic in the US (fig 1),8 and a wide gulf has opened between Democrats and Republicans in the debate around opening schools.9 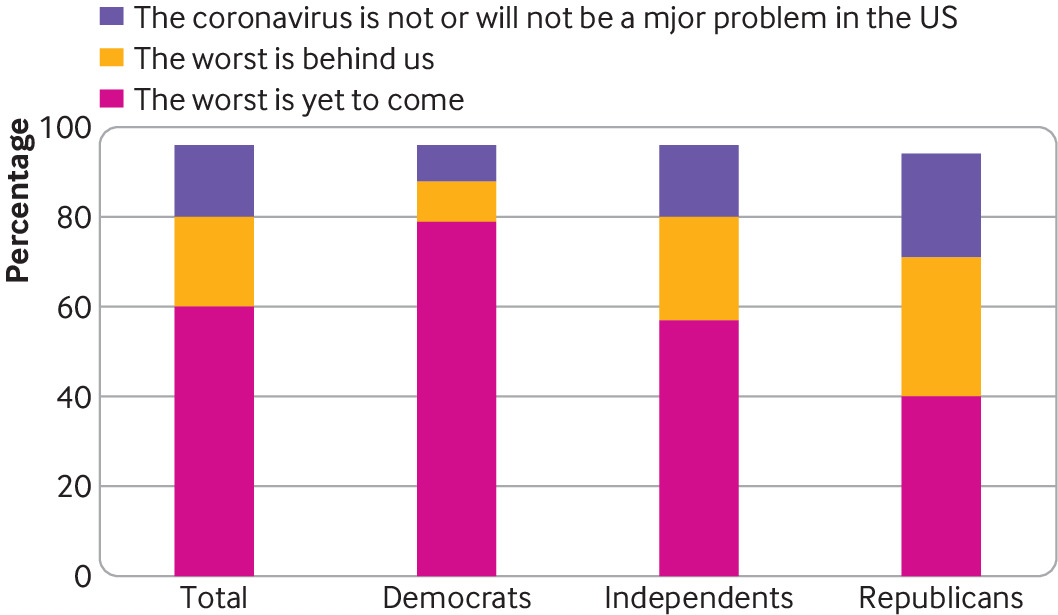 Democrats twice as likely as Republicans to say worst of coronavirus is yet to come. Source: KFF health tracking poll (conducted July 14-19 2020)

Strikingly, in a late August poll CBS and YouGov found that 90% of Democrats said the number of coronavirus deaths in the US was unacceptable. But a majority (57%) of Republicans said it was acceptable, in part because they believe the death count has been exaggerated.10 It is an open question whether attitudes and behaviour will change as the virus spreads through red and rural America.

Other reasons account for the poor performance in the US. The historic neglect and underfunding of our state and local public health system have also contributed to the weak US response.11 And our country’s public health system also operates independently of our healthcare system, which does not help.

Overall, however, the US response to the pandemic has much more to do with fundamental policy decisions made—and not made—in the White House than the nature of our much debated health system.

The distribution of a vaccine in the US may well be built on a similar state by state architecture, allowing for customisation but also substantial variation in performance, depending on the degree of oversight exercised by federal public health agencies.

The decentralised structure of the US response could have worked more effectively had the role of the federal government as “back-up” been buttressed by a national plan overlaying state responses and more fulsome federal support for testing, contact tracing, personal protective equipment, school reopening, and other elements of the response that require a national policy and resources targeted to state and local conditions.

The US coronavirus failure was not inevitable and does not have to be permanent. But it is historically aberrant for our federal government to follow and not lead in a national crisis, and equally unusual for our country to divide rather than unify in a time of crisis. This too is the product of the policy decisions that have been made and can be altered or unmade by the current or a future administration.

Drew Altman is president and CEO of the Henry J Kaiser Family Foundation (KFF). He is an innovator in the world of foundations and non-profit organisations and a leading expert on national health policy who publishes and speaks widely on health issues.

He founded the present day KFF in the early 1990s. He is also founding publisher of KFF’s Kaiser Health News, the largest health newsroom in the US, distributing coverage of health issues through major news outlets across the country.

He was commissioner of the Department of Human Services for the state of New Jersey, director of health and human services at the Pew Charitable Trusts, vice president of the Robert Wood Johnson Foundation, and served in the Carter administration. He is a member of the National Academy of Medicine and the Council on Foreign Relations and serves on numerous advisory committees.

Drew Altman earned his PhD in political science at Massachusetts Institute of Technology and completed his post-doctoral work at Harvard University before moving on to public service. He holds an honorary doctorate from the Morehouse School of Medicine.