Covid-19: the problems with case counting

Novel coronavirus cases in England have been rising steadily since the beginning of July. However, this trend may not tell us what we really need to know about the pandemic and the most serious cases—or what to do about them, says Elisabeth Mahase

From 10 to 16 August 2020, covid-19 case detections in England rose to 6418, up from 5763 the week before, Public Health England’s surveillance report shows.1 This fits in with the wider trend of a steady increase in cases since the beginning of July.2

So, is this the much feared second wave? Experts are increasingly concerned that these headline figures don’t provide a clear picture of what’s really happening in the pandemic—or how we should respond, such as with local lockdowns.

One issue in trying to interpret numbers of detected cases is that there is no set definition of a case. At the moment it seems that a polymerase chain reaction (PCR) positive result is the only criterion required for a case to be recognised.

“In any other disease we would have a clearly defined specification that would usually involve signs, symptoms, and a test result,” says Carl Heneghan, director of the Centre for Evidence Based Medicine at the University of Oxford and the editor of BMJ Evidence-Based Medicine. “We are moving into a biotech world where the norms of clinical reasoning are going out of the window. A PCR test does not equal covid-19; it should not, but in some definitions it does.”

Angela Raffle, honorary senior lecturer in social and community medicine at Bristol Medical School, is also concerned about this. She says, “In the early phase back in March, deaths were just reported numbers—you couldn’t tell quite what was being counted—then after a while the small print appeared defining what is counted as a covid-19 death.

“I’m still waiting to see the small print to clarify what we are counting as cases.”

Both Heneghan and Raffle say that it’s hard to compare the figures on cases over time because the way we define a case seems to have changed, moving from people with symptoms who have then tested positive to a PCR positive result alone, regardless of symptoms.

We could be seeing a rise in detected asymptomatic cases. While “the number of detected cases are rising, that is not the same as cases rising,” says Heneghan.

The latest infection survey by the Office for National Statistics (21 August) showed that the incidence rate for England had “levelled off”, as had the percentage of people testing positive for covid-19 (fig 1).3 Heneghan explains, “It is in the background, circulating at low levels; most of the people who have it are asymptomatic.” 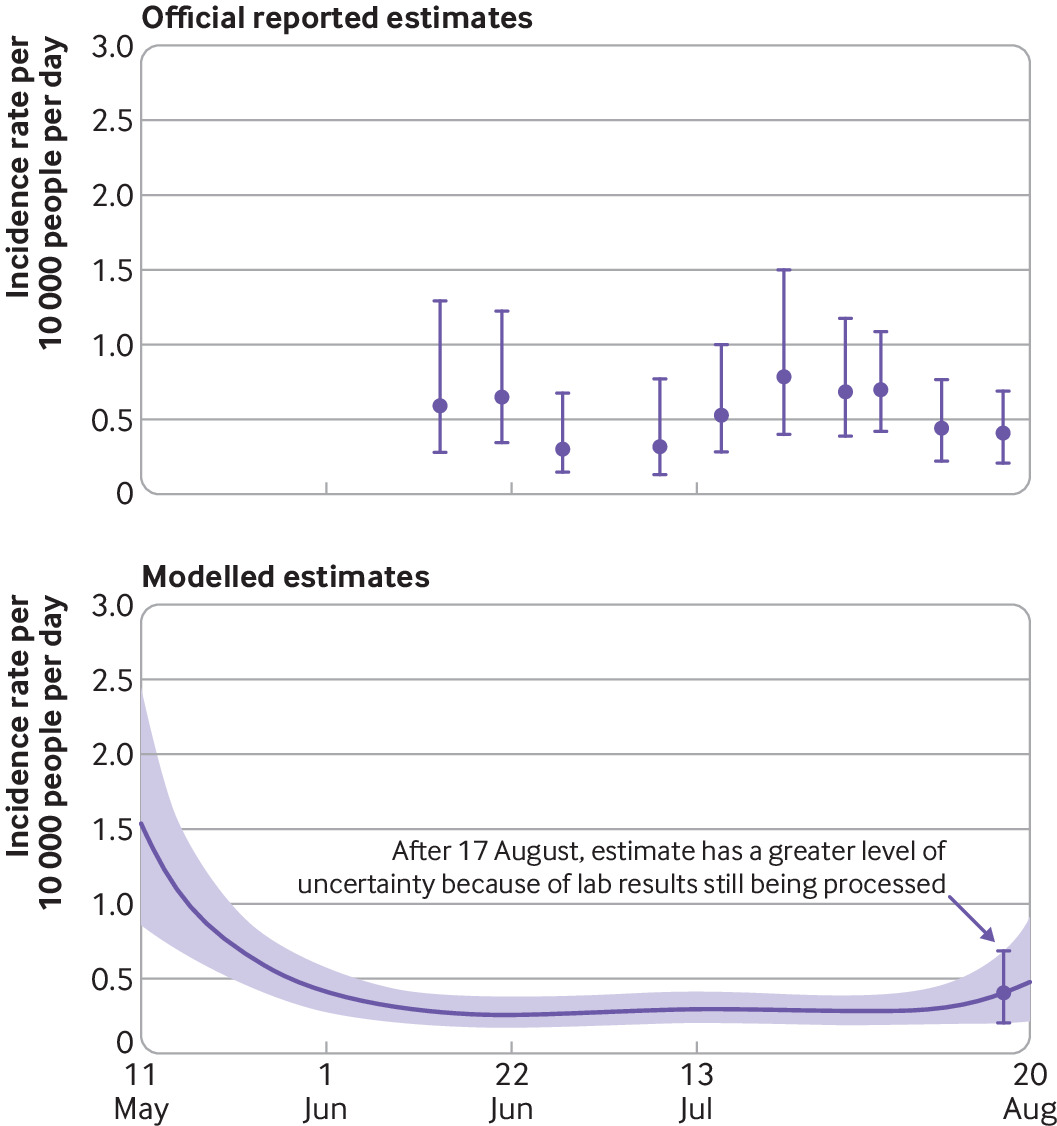 The incidence rate for England continues to level off (estimated numbers of new infections with covid-19, England, based on tests conducted since 11 May 2020)

Allyson Pollock, co-director of the Newcastle University Centre for Excellence in Regulatory Science and an Independent SAGE committee member, says that symptomatic and asymptomatic cases need to be separated out, to enable the government and local public health teams to understand what’s happening.

Heneghan suggests that, although this isn’t currently done, pillar 1 data (which include tests done in hospitals) can give some indication. “Generally, you look to pillar 1 data, and that has stayed pretty flat,” he says. “What we are [now] picking up is pillar 2, which is lots of case finding in the community” (fig 2). 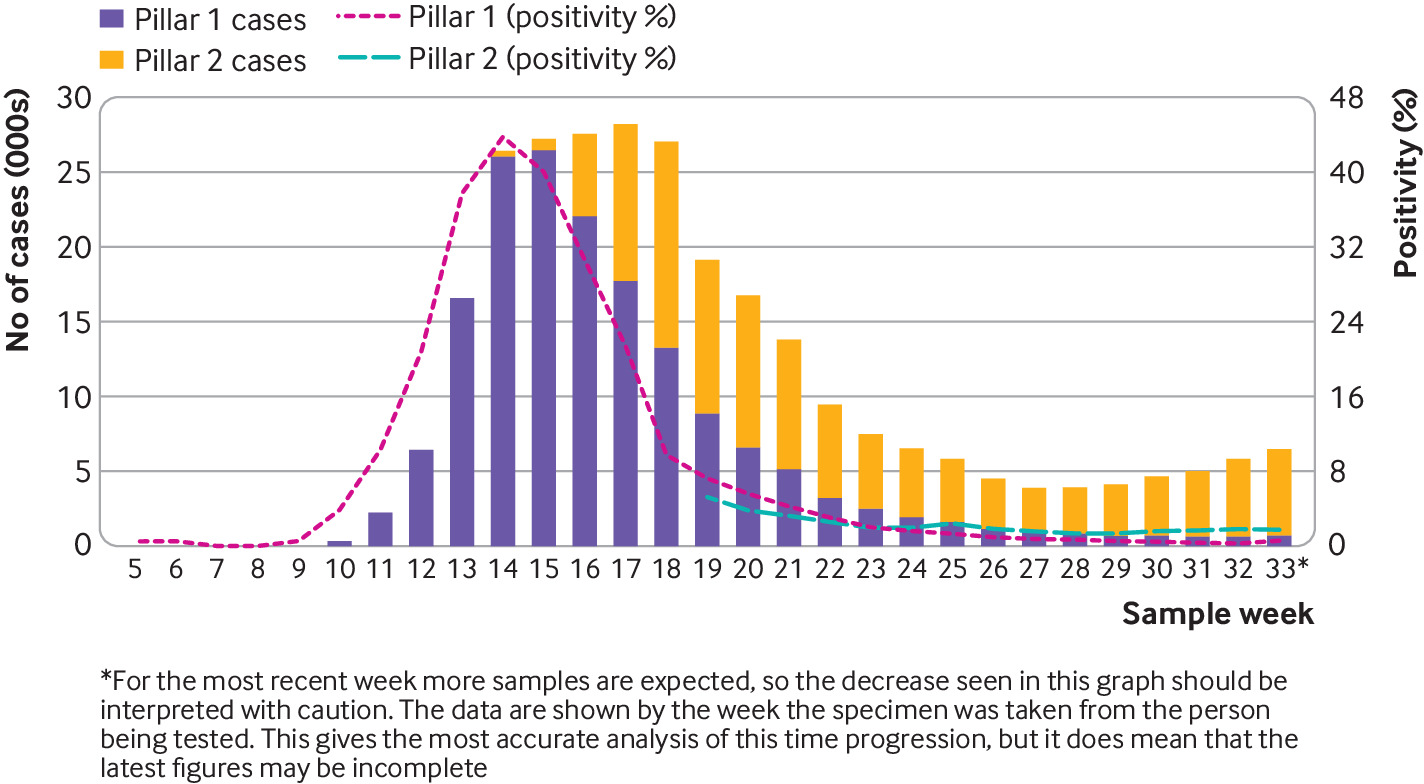 Another problem with relying on PCR testing alone to define a covid-19 case is that, owing to the sensitivity of the test, it can pick up a single strand of viral RNA—but this doesn’t necessarily equate to someone being infected or infectious.

Heneghan says, “If you go into a community population you are going to pick up more SARS-CoV-2 RNA for which you don’t understand the importance of what that means, particularly if you don’t interpret it in the context of symptoms or viral load. Many of these people might have had an active infection some weeks ago and are still carrying the RNA in their nasal swabs: it might not actually be live virus that you are picking up.”

The most important measure should be the disease’s impact, Heneghan adds. It’s important to know, he says, whether the rise in detected cases is due to more people presenting to the healthcare system with symptoms, as these are the cases that affect hospital admissions.

In fact, while case numbers have been rising, little change has been seen in hospital admissions. Both the government’s covid-19 dashboard and the weekly reports show that admissions and deaths have remained stable and may have even slightly declined.4

Pollock says, “It’s very difficult to interpret what is going on because hospital admissions don’t seem to be rising, although we may still see a spike. Is it that we’re picking up cases in a different population—those who are healthier? Is the virus attenuating in some way? Or is there more background immunity?”

Alongside the increased detection of asymptomatic cases, another possible explanation for hospital admissions not correlating with the increase in cases could be a rise in the number of detected cases in younger people: a healthier population, as Pollock hypothesises. Age is a factor in the risk of developing serious illness, and being over 70 is enough to put someone into the NHS’s moderate risk category. Recent figures show that the highest rates of new detected cases were in the 15-44 year age group.1

“This group is less likely to need hospital admission.”

While the testing data are so opaque, using them to direct local lockdowns is unhelpful, argues Heneghan. “The testing is there to drive the test and trace strategy,” he says. “But what seems to be happening is that, as soon as we see an outbreak, there tends to be panic and over-reacting. This is a huge problem because politicians are operating in a non-evidence-based way when it comes to non-drug interventions.”

More attention should be paid towards hospital admissions and cases with symptoms, he believes. “PCR testing should drive the test and trace strategy. That’s separate to a strategy on restrictive measures and what is happening with the disease impact,” he says. “When there is an outbreak the question they should be asking is, how does this translate into the impact of the disease?”

On top of this, Pollock says that the government needs to get the statutory notification system working so that suspected cases can be reported. “GPs were cut out of covid care from the start, and they are still cut out of it,” she explains. “We should be ensuring that suspected cases in the community are reported, and that should work as an early warning system and trigger contact tracing. We have really failed in that, and as a result we don’t have good community data, and the data we do have is messed up because we are adding into the mix cases identified through mass testing of asymptomatic people.

“It’s a mess, it’s chaotic. The government should separate out the reporting of test data now. They should also bring GPs back into the system properly.”

See other articles in issue 8258