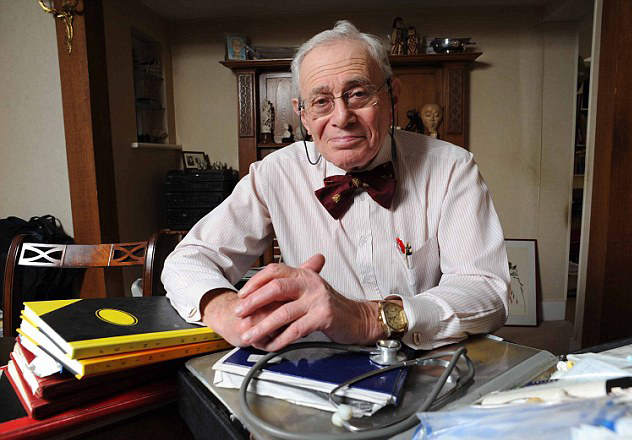 Edouard “Eddie” Josse was Britain’s longest serving police surgeon until his retirement, five years ago at the age of 82. Also a one time BMA negotiator and all round forensic and educational polymath, he was renowned for his resounding laugh, kindness, and incisive mind. He worked until November 2019 and was to have helped to run a chest clinic at the North Middlesex University Hospital on the day that he became an inpatient at the Royal Free Hospital.

Police Commissioner Bernard Hogan-Howe thanked Josse personally for his 50 years with the Met. A former president of the Association of Police Surgeons, Josse subsequently remained in demand as an expert witness, especially in drink driving cases. His wide ranging expertise included police custody and detention, assault, drug testing, and medical competence and negligence.

In one famous case he took samples from a sexual assault in 1984. The police initially did not find the attacker but the samples were stored for 31 years until the suspect was arrested and charged. The case, said Josse, highlighted the importance of correct sample collection and storage in case it might become useful later—as in this case, because of the advent of DNA testing.

The eldest son of a French furrier, Josse was brought up in north London and educated at Highgate School, where he developed a lifelong love of cricket. He yearned to be a lawyer, but his traditional Jewish parents had their hearts set on young Eddie and his two siblings pursuing medical careers. Josse was delighted when his career finally embraced both disciplines.

After qualifying and doing house jobs, he went into general practice in north London with Neville Davis in 1964. Concerned about the financial prospects in general practice, they sought supplementary income. Both became police surgeons and worked for the UK Protection and Indemnity Club, an international mutual insurer. They travelled all over the world to escort sick or injured seamen and other personnel back to the UK. Josse also became a respiratory physician at North Middlesex University Hospital—where he stayed until late last year. Becoming close friends, Josse and Davis thrived in what became a flourishing practice for more than 30 years.

What made Josse stand out was the diversity of his career and professional interests. Friends and colleagues say his real forte was academic medicine. A renowned mentor and trainer, he served as a member, secretary, and chair of the Joint Committee on Postgraduate Training for General Practice and as a regional adviser and subsequently associate dean, postgraduate medicine, at the British Postgraduate Medical Federation. His wife says that he was “especially proud” to be appointed secretary general of the European Union of General Practitioners. He was responsible for introducing formal GP training across the EU. But he never became—as had been predicted—president of the Royal College of GPs.

Did this disappoint him? His friend, Peter Green, specialist in forensic and legal medicine, said, “I never discussed it with him, but Eddie was a man who would shrug his shoulders and move on rather than worry about what was not to be.” Few doctors have “moved” more than Josse. A council member of both the Royal Society of Medicine and the BMA, he was highly active in BMA annual representative meetings and other forums.

He and his second wife had a passion for international travel. At home he was a regular visitor to Lord’s and a member of both Middlesex County Cricket Club and the Marylebone Cricket Club. Despite intense family concern, he skied into his mid-70s, taking on steep and narrow “black runs,” the most challenging and potentially dangerous of all runs. A collector of stamps and rare coins, he also enjoyed gardening and good wine and malt whisky.

He leaves his second wife, Yvonne, president of the League of Jewish Women; and two of his three children from his first marriage, David, a barrister, and Anna, chief executive and founder of the Prism charity.