What is happening to non-covid deaths?

Concerns are being raised that one possible consequence of efforts to contain covid-19 could be an increase in deaths from other causes. It’s still relatively early in the spread of the pandemic. There will be lags in the reporting of deaths, as well as issues around attributing the causes of death. But could this concern be real?

One problem may be that people may not seek care from the NHS, perhaps because they fear contracting covid-19 or they don’t want to burden the NHS at a time when the service is under pressure. An indicator of this is the March data for the numbers of attendances at emergency departments and for all emergency admissions in England. These show a big fall from 2019 to 2020: attendances dropped by 29% and emergency admissions by 23% (fig 1).1 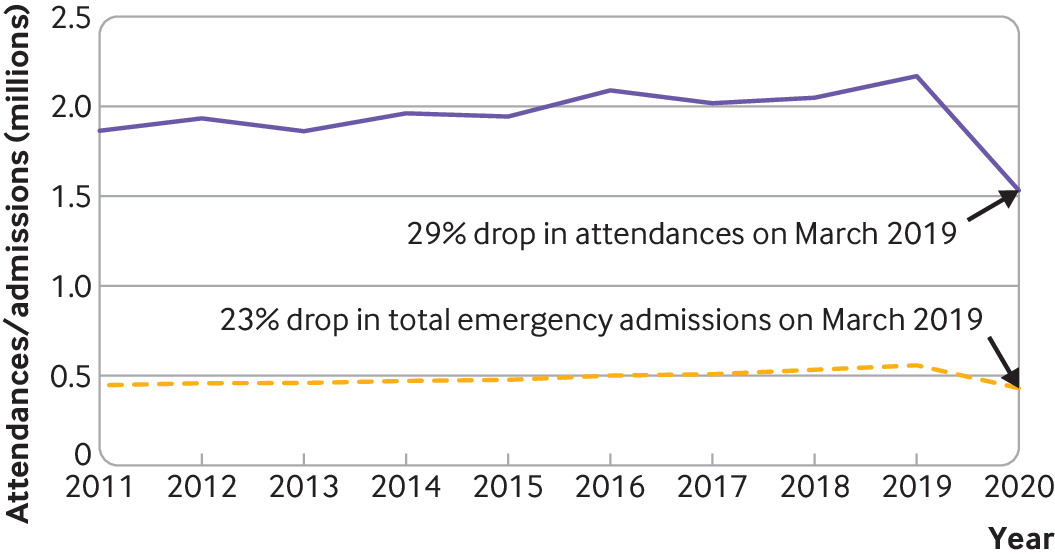 What we don’t know of course—at least not yet—is who has stayed away and what happened to them. Many, presumably, will have self-treated or used other services, such as general practice. But these are large falls, and the fear would be that some who didn’t attend emergency departments will have died, or may die in the coming months, when timely treatment may have prevented their death. Deliberate delays by hospitals in treating non-covid patients in order to make capacity to deal with the pandemic will be a particular concern, although data on postponed treatments are not yet available.

On actual deaths, weekly reporting from the Office for National Statistics (ONS) on the number of registered deaths shows that, in the week ending 17 April 2020, 11 854 more people died than the equivalent five year average for this week (fig 2).2 This may be some natural variation around the average, but given the high numbers above the average in the previous week the rise looks less than random. 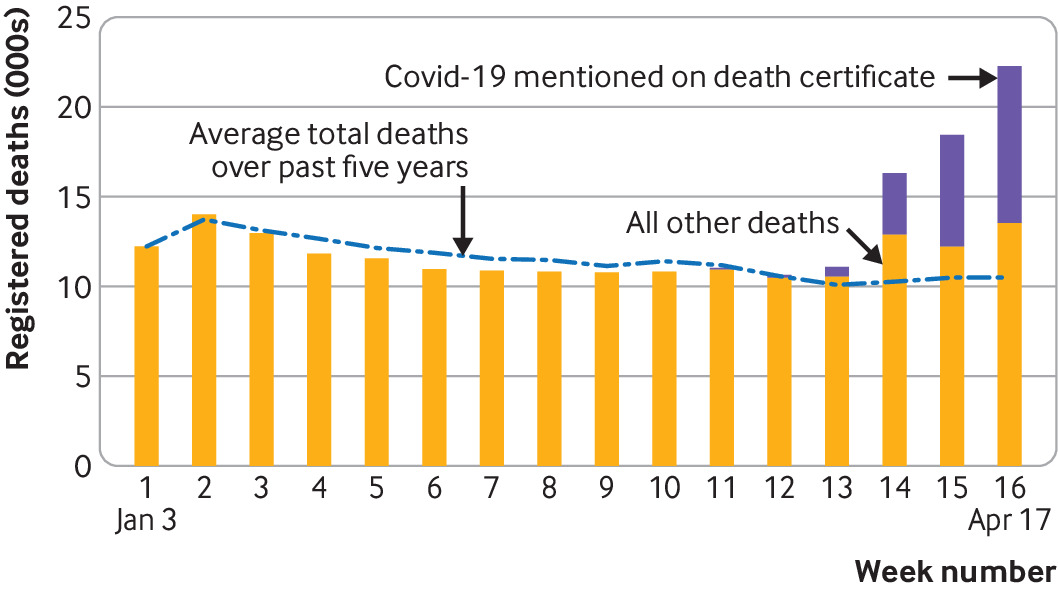 Weekly registered deaths in England and Wales, 3 January to 17 April 20202

It’s clear that the number of death registrations mentioning covid-19 accounted for a large part of this excess (8758)—but not all. Other causes of death accounted for 3096.

These figures might support a contention that the measures being taken to deal with covid-19 may be having a negative effect on other causes of death, particularly other respiratory causes. But there’s a potential problem with the death data: it may be that deaths from covid-19 have been undercounted and that increases in other causes have been artificially boosted.

But, as figure 3 shows, around 70% of the change in covid-19 deaths over the six weeks to 17 April occurred in hospitals (6102), with care homes accounting for just 23% (2050) and the remainder in people’s homes and other places. Given the relatively low level of covid-19 testing outside hospitals, some—or many—of the other deaths in homes and care homes (which increased by 4225) may also have been related to covid-19. Indeed, the representative body for care homes, Care England, estimates that there have been around 7000 covid-19 related deaths in care homes so far3 compared with the 1043 reported by ONS since the end of December 2019.2 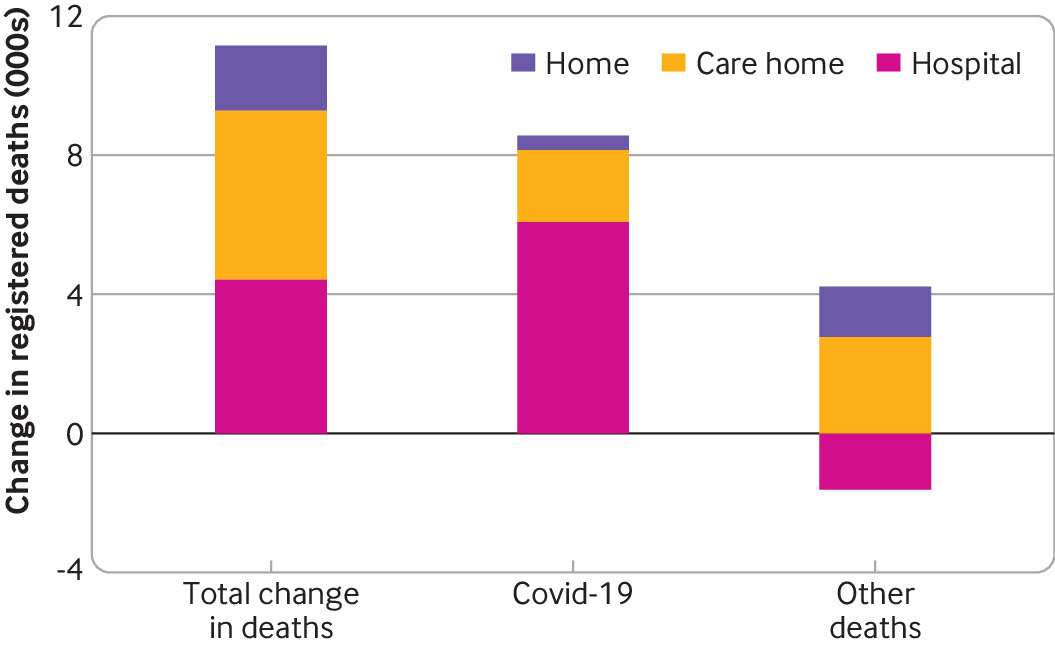 To complicate the picture, during March, while age standardised death rates for covid-19 show it was the third most common cause of death, ischaemic heart disease was 26% lower than the five year average for March, and cerebrovascular and chronic lower respiratory diseases were 18% and 10% lower, respectively (fig 4).4 Are these figures random variation around the average, or could they suggest that some of those whose deaths might previously have been classified from these causes have succumbed instead to covid-19? 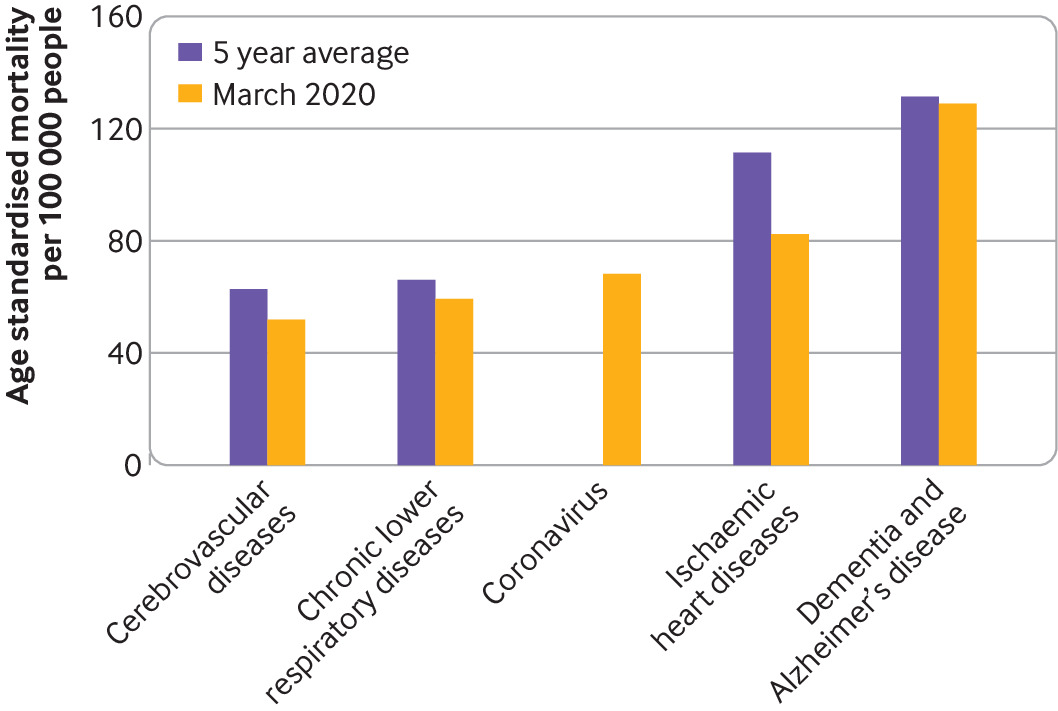 For the moment, it seems impossible properly to answer concerns about the wider effect current measures might be having on the health of the population. The data are incomplete, too uncertain, and too fast moving to support any reliable conclusions.

The current intense public scrutiny and interest in data on deaths from covid-19 has exposed—even in statistically sophisticated countries such as the UK—the difficulties of constructing a comprehensive and consistent picture of the situation as it unfurls from week to week. In the context of a global pandemic and the need for internationally comparative data, the position in many other countries is even worse. The World Health Organization estimates that although 84 countries collect usable data on deaths and cause of death, 81 collect only very low quality data or fail to register deaths at all, with just 6% of African countries collecting cause of death data (fig 5).56 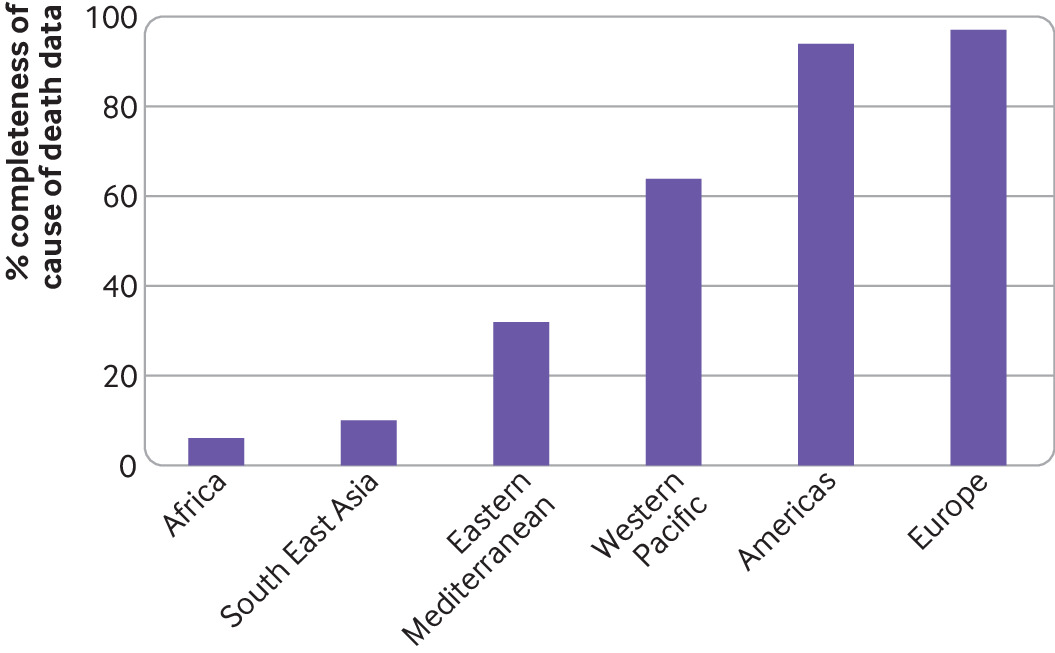