Health equity in England: the Marmot review 10 years on

Ten years after the landmark review on health inequalities in England, coauthor Michael Marmot says the situation has become worse

Britain has lost a decade. And it shows. Health, as measured by life expectancy, has stopped improving, and health inequalities are growing wider. Improvement in life expectancy, from the end of the 19th century on, started slowing dramatically in 2011. Now in parts of England, particularly among women in deprived communities and the north, life expectancy has fallen, and the years people spend in poor health might even be increasing—a shocking development. In the UK, as in other countries, we are used to health improving year on year. Bad as health is in England, the damage to the health of people in Scotland, Wales, and Northern Ireland has been worse.

Put simply, if health has stopped improving, then society has stopped improving. Evidence, assembled globally, shows that health is a good measure of social and economic progress. When a society is flourishing, health tends to flourish. When a society has large social and economic inequalities, it also has large inequalities in health.1 The health of the population is not just a matter of how well the health service is funded and functions, important as that is, but also the conditions in which people are born, grow, live, work, and age, and inequities in power, money, and resources. Taken together, these are the social determinants of health.2

This damage to the nation’s health need not have happened. In 2010, both the Labour government and the Conservative-led coalition government that followed it were concerned that health inequalities in England were too wide and that action was needed to reduce them. To inform that action the government in 2008 commissioned me to review what it and wider society could do to reduce health inequalities. Colleagues and I at what later became the UCL Institute of Health Equity convened nine task groups of more than 80 experts to review the evidence and assembled a distinguished commission to deliberate on that evidence. The result was the Marmot review, Fair Society Healthy Lives, published in 2010.3 The review was commissioned by the Labour government and welcomed by the coalition government in a public health white paper.

The Marmot review laid out how public expenditure on policies, through the life course, could act on the social determinants of health to reduce health inequalities. It might have been welcomed in theory, but in reality, under the banner of austerity, public expenditure was cut from 42% of national income in 2009-10 to 35% in 2018-19

In a new report, Health Equity in England: the Marmot Review 10 Years On,4 we show that austerity has taken its toll in almost all of the areas identified by the Marmot review as important for health inequalities. Child poverty has increased. Children’s centres have closed. Funding for education is down. There is a housing crisis and a rise in homelessness. Growing numbers of people have insufficient money to lead a healthy life and now resort to food banks. There are more left-behind communities living in poor conditions with little reason for hope.

Given the strength of the evidence on social determinants of health inequalities, this rolling back of the state is likely to have had an adverse effect on health and health inequalities. I cannot say with any certainty which of the changes associated with austerity were responsible for the increase in health inequalities and which might cause damage in the future, but the figures show adverse impact across the whole range of domains in the Marmot review on the lives that people are able to lead.

Growing inequalities according to region and deprivation

This slowing down is real. But the explanations have been disputed. I claim, based on a general view of health trends globally, that if health stopped improving, then society must have stopped improving. We have considered and can reject more prosaic explanations. First: perhaps we’ve reached peak life expectancy. It has to slow some time. Plausible, but other European countries with longer life expectancies than England or other countries of the UK have continued to increase. We have a way to go before we hit peak. Second, perhaps we had bad winters and bad flu outbreaks. Mortality goes up in a bad winter. Analyses that we did for the new report showed that improvements in mortality slowed in non-winter months, as it did in winter months. At most, winter effects could account for between one sixth and one eighth of the slowing down in improvement.

The growing inequalities in health according to deprivation and region support my contention that the real causes of the failure of health to improve are social. The relation between deprivation and health is graded. Classifying areas of the country by the index of multiple deprivation reveals a strong and consistent gradient: the more deprived the area, the lower the life expectancy. In 2016-18, men in the least deprived 10% of England had life expectancy 9.5 years longer than men in the most deprived; for women the gap was 7.7 years (fig 1). Earlier, in 2010-12, the gap was 9.1 years for men and 6.8 years for women. Among women in the most deprived 20% of areas there was no improvement at all, in sharp contrast to the continued improvement for the most fortunate 20%. 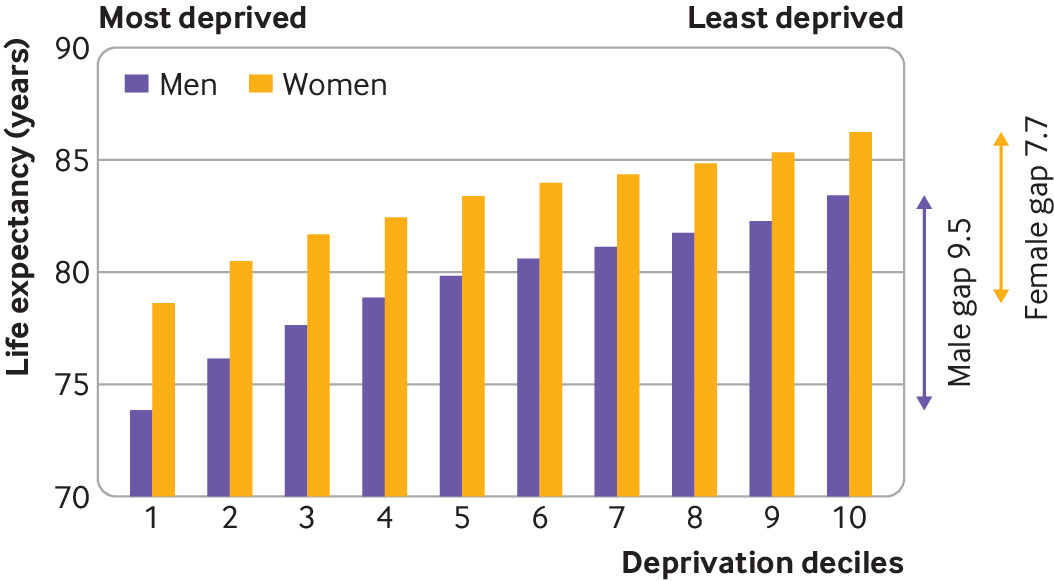 Life expectancy at birth by area deprivation deciles and sex, England, 2016–18. Based on data from Public Health England, 2020.5

There are well known regional differences in mortality and life expectancy—people in the north of England are sicker, for example. Deprivation and geography come together in important ways. For people living in in the least deprived 10% of districts, there is little regional difference in life expectancy. If you are among the most fortunate 10% it doesn’t much matter in which region of the country you live in, your demographic subgroup will have experienced improvement in life expectancy. The more deprived your district the greater the disadvantage of living in the north compared with London and the south east. Particularly for women, life expectancy in the most deprived 10% declined in the north east, Yorkshire and Humberside, and other areas outside London and the north west.

Life expectancy is used as an indicator, but health is more than the expectation of length of life. The social gradient in healthy life expectancy is steeper than that of life expectancy. And years spent in poor health increased between 2009-11 and 2015-17: from 15.8 years to 16.2 in men and from 18.7 years to 19.4 years in women.

Cutting back the role of the state

The governments elected in Britain in 2010 and 2015 had austerity as a central plank of policy. The stated aim was to restore the economy to growth by restricting public expenditure. By one measure, at least, it didn’t work: wage growth. International comparisons of wage growth between 2007 and 2018 show that Britain, with minus 2%, was the third worst of 35 rich (Organisation for Economic Co-operation and Development) countries, only better than Mexico and Greece.6

If pushed, the governments would probably have denied that the purpose of policy was to make the poor poorer and allow the top 1% to resume the trajectory—briefly interrupted by the global financial crisis—of garnering a larger share of national income and wealth. But that was its effect. Changes to taxes and benefits introduced in 2015 were neatly regressive, leading to those with lower incomes experiencing a greater reduction in income.7 Cuts to services and to local government hit more deprived areas and families hardest.

It is hardly surprising that ill effects should result from a 40% cut in spending on welfare for families; a 31% cut to local government expenditure in the most deprived 10%, compared with 16% in the least deprived 10%; and funding for sixth form and further education falling by 12% per pupil.8 If the architects of these policies imagined that all that money had been going to waste, the evidence indicates that they were mistaken—our new report documents substantial harmful effects.

Which of these might be most responsible for an increase in health inequalities is difficult to say because they are inter-related. In the 10 Years On report we examine impacts in five of the six domains of recommendations made in the Marmot review: give every child the best start in life; ensure access to education and lifelong learning; improve employment and working conditions; ensure people have enough money to lead a healthy life; promote sustainable places and communities.

Investing in early childhood creates hope for the future. Adverse trends over the past decade do not explain the health trends of the past decade but might be a harbinger of things to come. Early childhood is crucial; not just for health, but development—cognitive, linguistic, social, emotional, and behavioural skills. Good early child development predicts good school performance, which in turn predicts better educational and occupational opportunities and more salutary living conditions in adulthood. Conversely, adverse childhood experiences cast a long shadow, predicting mental and physical illness in later life.

More generally, both the good and bad things that happen in early childhood influence individuals’ abilities through life. We emphasise the importance of agency—having control over one’s life—as central to health and health inequalities. Agency starts with good early child development and protection from adverse childhood experiences. It continues with having enough resources in adulthood to lead a life that one has reason to value. Having insufficient money to pay rent or feed children is deeply disempowering.

Early childhood contributes to health inequalities in adult life because of the social gradient. Good early child development is less common as deprivation increases and adverse child experiences are more common. Thus, approaches to reducing inequalities in health must include improving services that break the link between deprivation and poor outcomes for children and reducing deprivation in childhood. The signs are not good. It has been estimated that, as a result of cuts to local government, 1000 Sure Start children’s centres have had to close.9 The welcome support for childcare for older pre-school children does not make up for these closures.

In the Marmot review in 2010, we wrote “Health inequalities are not inevitable and can be significantly reduced. They stem from avoidable inequalities in society.”

A report from the Royal Society for Public Health said that we got the evidence and approach more or less right. The society surveyed its members and a panel of experts on their views on the major UK public health achievements of the 21st century to date. The top three were the smoking ban, the sugar levy, and the Marmot review.10

Unfortunately, as we point out in the report, there are no routine figures produced for life expectancy based on race or ethnicity. The figures that we do have point to half of minority ethnic groups—mostly black, Asian, and mixed—having significantly lower disability free life expectancy than white British men and women.

We have now laid out a new set of recommendations following the intellectual framework of the Marmot review. It is our firm view that such recommendations are vital to creating a society that is just and sustainable for current and future generations.

Michael Marmot is professor of epidemiology and public health and director of the Institute of Health Equity at UCL. He has chaired various major reviews of the social determinants of health, including the 2010 Marmot review of health inequalities in England published as Fair Society Healthy Lives.

The authors of this 10 Years On report were, in addition to MM, Jessica Allen, Peter Goldblatt, Tammy Boyce, and Joana Morrison, the first four of whom were authors with MM of the original Marmot review in 2010. This 10 Years On report was supported by the Health Foundation, who provided important comments on the work as it proceeded.