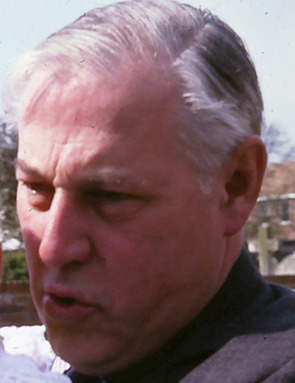 Michael Hamilton was an early pioneer of the clinical research into effective management of essential hypertension, demonstrating for the efficacy of trials based within a community rather than a teaching hospital setting.

Michael was born in Bradford, Yorkshire, to Archibald and Silvia (née Wolf). Archibald was a general practitioner with a distinguished first world war record as a captain in the Royal Army Medical Corps. A family friend was the physician Charles Wilson, who later became Baron Moran.

Michael was educated at a primary school in Bradford, where a fellow pupil and future lifetime friend was Stanley Peart. His secondary education at the Royal Medical Benevolent College, Epsom (now Epsom College), followed the premature death of his father and the encouragement of Charles Wilson to seek a scholarship.

Michael graduated with distinction in pathology and obstetrics, and undertook house officer posts at Amersham Hospital. He met Jane, a nurse, at the hospital, and they married in 1946.

After national service, Michael returned to St Mary’s Hospital as a medical registrar and senior registrar to the medical unit (1949-52). He worked for Sir George Pickering and undertook research into hypertension. In 1949, knowledge about the causes and effective therapies for management was limited, with premalignant and malignant hypertension the common clinical presentations. Michael supported Pickering in his analysis of epidemiological surveys that implied the distribution of raised blood pressure in a population to be a continuous variable. This countered Lord Platt’s proposal for hypertension being inherited as a dominant characteristic with the distribution of blood pressure as biphasic. A series of papers from Pickering’s group provided further evidence and fuelled the “Platt v Pickering debate.” Although Platt’s hypothesis dominated during his life time, Pickering's view ultimately dictated the basis of current understanding and treatment policies.

Michael moved to the Royal Postgraduate Medical School at Hammersmith Hospital to work as a senior registrar for Sir John McMichael (1952-56). McMichael inspired him to undertake research into the pathogenesis and treatment of hypertension; at this time the few available drugs were associated with such severe adverse reactions that few patients were prepared to take them for the longer term. Michael’s early research included trials of ganglion blocking drugs for the management of malignant hypertension. These studies uniquely investigated the impact of such drugs on peripheral circulation and body temperature. Michael’s publications identified the longer term impact from sustained hypertension on the heart, and the immediate need to discover more effective and better tolerated antihypertensive agents for modest elevation of blood pressure.

A Nuffield research fellowship enabled him to spend 1954 at the Alfred Hospital in Melbourne, followed, in 1955, by a year at the University of Otago, New Zealand. The fellowship resulted in academic and clinical collaborations that continued throughout his career.

In 1956 Michael was appointed as physician to the Chelmsford Group of Hospitals in Essex. His close friend, Harry Kopelman, had previously been appointed as physician to St Margaret’s Hospital, Epping, and the two of them established the “Chelmsford-Epping Round,” which was hosted over many years alternating between Chelmsford and Epping (and later Harlow). The round provided junior medical staff with the opportunity of presenting interesting, occasionally curious, clinical cases, followed by a general discussion. The reputation of the Saturday round attracted considerable interest and included the King’s College Hospital liver unit twice each year.

Michael established the academic medical unit in Chelmsford as a centre for education and research in 1960s, and uniquely anticipated the importance of well defined clinical trials from a district hospital setting long before the advent of the national Institute of Health Research. He recognised the importance of long term controlled trials for the treatment of hypertension before this became convention; his publications included trials of benefits of antihypertensive drugs - thiazide, clonidine and methyl dopa. A seminal paper published in 1971 followed up 227 patients with moderate to mild hypertension treated for up to 12 years on thiazides and demonstrated for the first time excellent outcomes compared with clonidine, and methyldopa treatments. This paper influenced subsequent treatment guidance. Michael’s later publications included trials of β blocking agents and reviews of the management of essential hypertension that introduced the use of captopril, the first angiotensin converting enzyme inhibiting agent. His reputation as an expert in hypertension extended around the world, and he was invited to present papers at international conferences and join international committees. He was a member of the oversight committee for the Medical Research Council trial for treatment of mild hypertension (1980-85). Michael was invited to consider prestigious academic appointments in the UK and Australia on several occasions during his career. He declined because of his love of clinical practice and a dedication to his patients in Essex. Many distinguished physicians started their careers working with Michael, including Gareth Beevers, Roger Boyle, and David Webb.