How can we realise the full potential of health systems for nutrition?

Read our Leaving No One Behind collection

Poor nutrition contributes substantially to global disease, diminishing the wellbeing of women and children in low and middle income countries, and better nutrition must be part of the universal health coverage agenda, say Rebecca Heidkamp and colleagues

Over the past decade, global efforts to raise awareness of malnutrition have been accompanied by national movements to gain high level political commitment and accelerate actions, proved to work, to improve nutrition.1 Despite this momentum, by 2018 just under half of countries are on track to meet at least one of nine nutrition related targets set by the World Health Assembly for 2025 (table 1).4 Many countries are not achieving the goals because coverage of effective interventions remains low. Health systems are the primary vehicle for nutrition interventions in many low and middle income countries. Ideally, health systems reach women and children through frequent antenatal care, normal and emergency delivery services, early postnatal care, and preventive and curative care throughout early childhood. Nutrition interventions commonly include counselling about diets and infant and young child feeding during antenatal care, postnatal care, and for the first two years of life. Additionally, weight gain is monitored and nutritional supplements, particularly iron folic acid, provided during antenatal care. Common interventions for young children include high dose vitamin A supplements, growth monitoring and screening for, and treatment of, acute malnutrition, and treatment of childhood diarrhoea with zinc tablets in combination with oral rehydration solution.5

Gaps in data on the coverage of nutrition interventions are hampering efforts to evaluate progress, estimate benefits, and advocate further investments.6 Global household survey programmes, including the Demographic and Health Surveys and Multiple Indicator Cluster Surveys, have historically included a limited set of nutrition coverage indicators. These national sources enable aggregation and comparison of common indicators within and across countries. However, such data are available for less than half of the evidence based nutrition interventions recommended by the World Health Organization (table 2). Nevertheless, we can still use available data to identify opportunities to influence health systems for nutrition more effectively.

We studied publicly available data for five evidence based nutrition interventions7 and their associated service delivery for maternal, newborn, and child care for 50 countries that had at least one Demographic and Health Survey or Multiple Indicator Cluster Survey from 2013 to 2018. We pooled countries by World Bank country income group. We characterised the delivery “opportunity gap” as the absolute difference between coverage of the nutrition intervention and coverage of the health service through which it is commonly delivered—for example, iron folic acid supplementation is the nutrition intervention delivered through antenatal care. We considered early initiation of breastfeeding to be a proxy for intervention by birth attendants at delivery to support timely breastfeeding.8 We characterised zinc for diarrhoea as a nutrition intervention and oral rehydration solution as the health service because not all episodes of diarrhoea require contact with a health provider but all children who receive oral rehydration solution should also receive zinc.

We also examined coverage equity gaps in two ways. Firstly, we looked at absolute differences in coverage across rural and urban areas; secondly, we examined subnational variability in coverage by comparing the region with highest coverage with the region with lowest coverage. We examined trends by income group using countries that had at least one additional survey between 2008 and 2012. Indicator definitions, detailed methods, a discussion of limitations, and country data are available in the web supplement.

Several findings stand out. Firstly, closing the opportunity gap by increasing nutrition intervention coverage among those already reached by health services should be an immediate priority. The coverage of most nutrition interventions falls far below the reach of health services through which they are delivered, particularly for antenatal care and delivery care (fig 1). Closing this gap is essential to reach targets. A recent study from Malawi using national data estimated that if all women who reported antenatal care visits had received all recommended nutrition interventions, including iron folic acid, and counselling on appropriate nutrition during pregnancy and optimal breastfeeding, the prevalence of low birthweight would have had a relative 21% decrease, from 14% to 11%, and early initiation of breastfeeding would improve by almost 10 percentage points, from 76% to 86% (Joseph et al, unpublished data).

Secondly, children are being left behind. The reach of nutrition services targeted at children is falling far behind that for women. For example, zinc for diarrhoea treatment in children had the lowest coverage among the interventions we examined. Nearly 15 years after the release of the WHO recommendation for zinc to treat diarrhoea and multiple “calls to action” by leading public health researchers,9 coverage among children with diarrhoea is only 16% (fig 1).

Thirdly, some subpopulations are being left behind. Rural coverage generally lags behind urban coverage but disparities are not large. The biggest coverage disparities within countries are between subnational regions (fig 2). This can be seen clearly in Cambodia, where the equity gap between rural and urban areas for iron folic acid is less than three percentage points but the equity gap between the provinces of Cambodia with highest and lowest iron folic acid coverage is 55 percentage points.

Are we headed in the right direction?

Coverage of nutrition interventions across country income groups is similar (fig 1). The exception is high dose vitamin A supplementation, which is not universally distributed in upper middle income countries, presumably owing to lower rates of deficiency. However, progress—defined by increasing coverage and decreasing inequality over time—varies by both intervention and income group. Figures 3-6 show the variability in progress across country income groups, comparing changes in rural and urban coverage of nutrition interventions and their associated health services over the past decade. 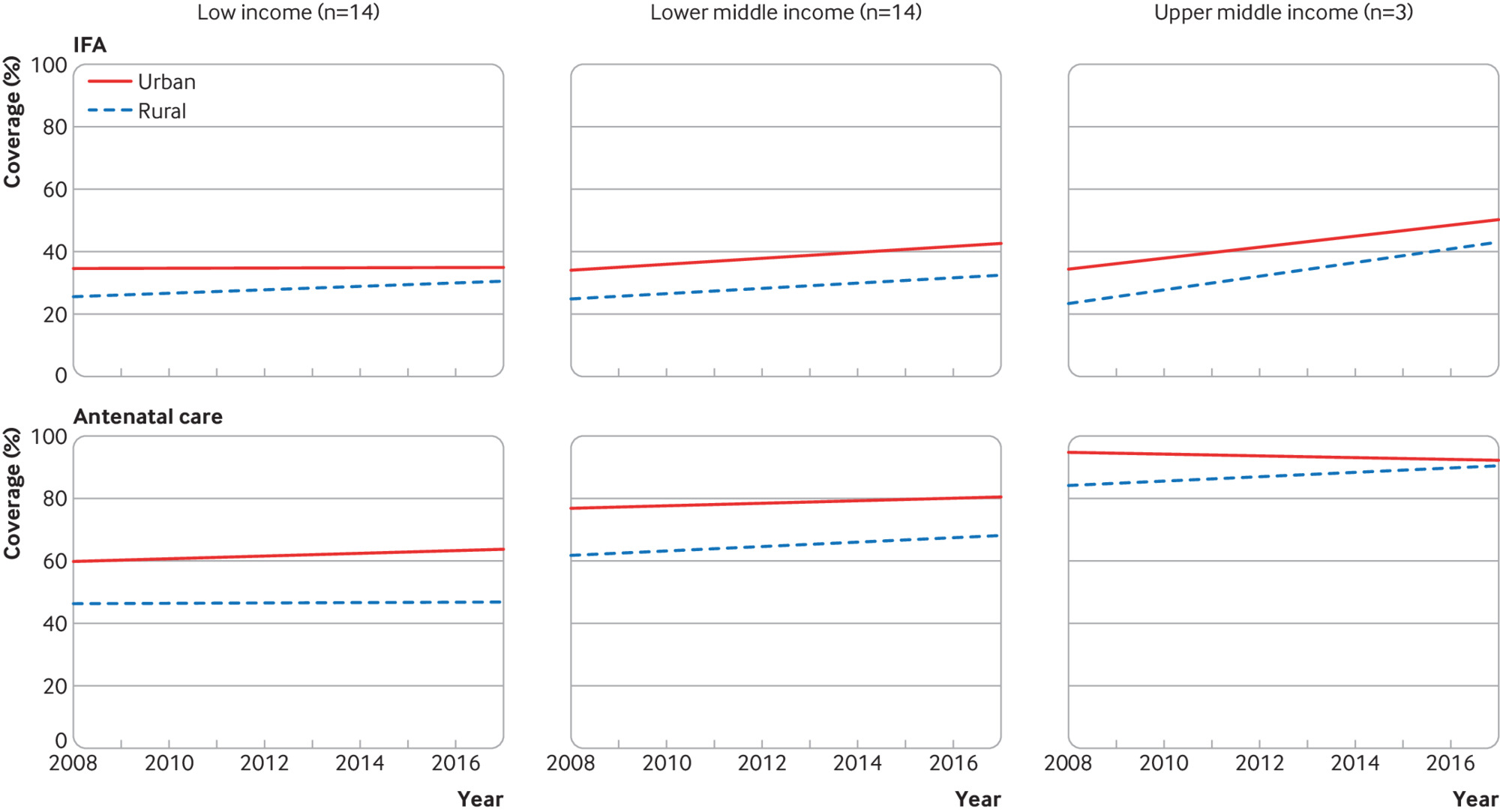 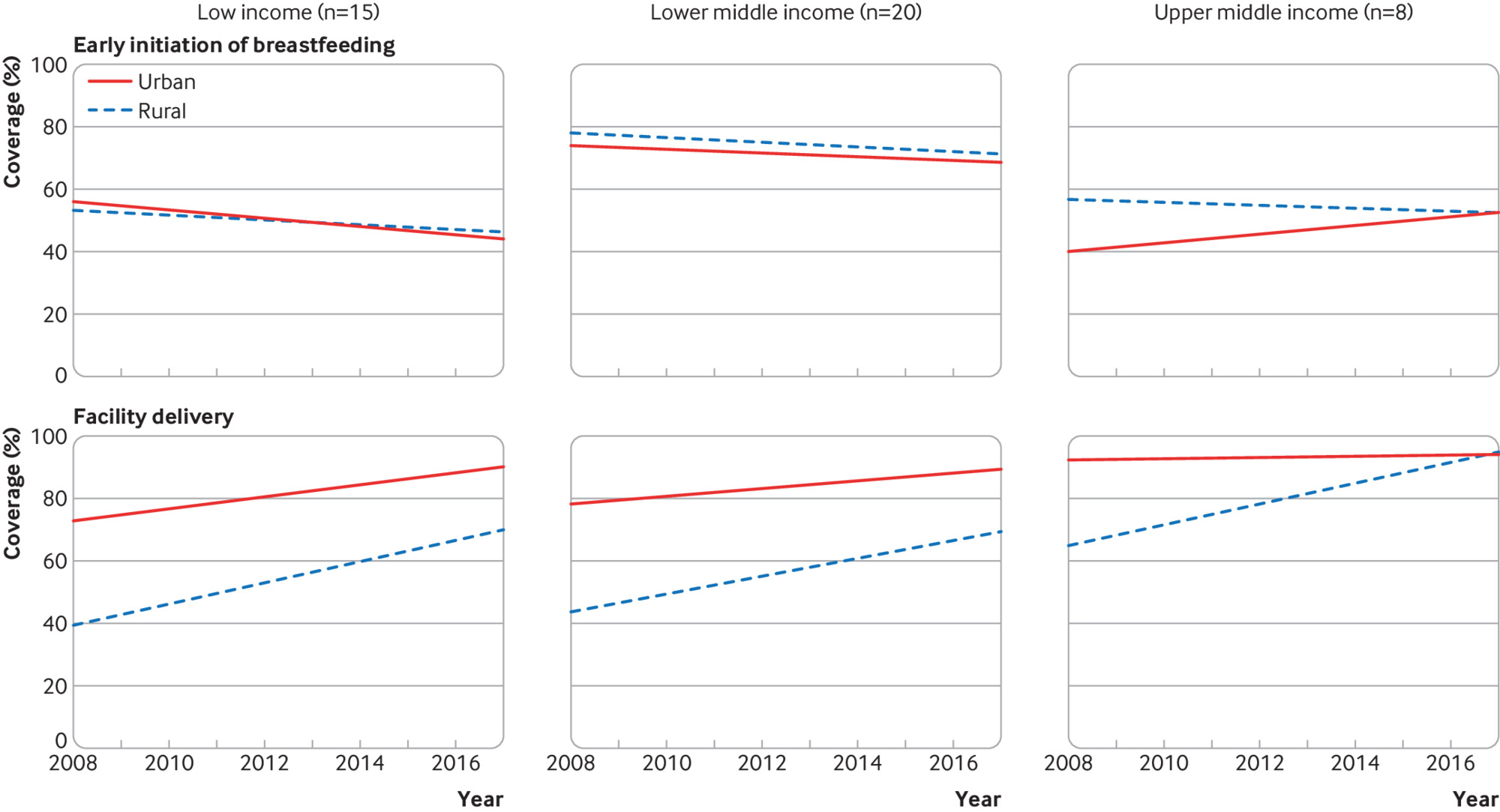 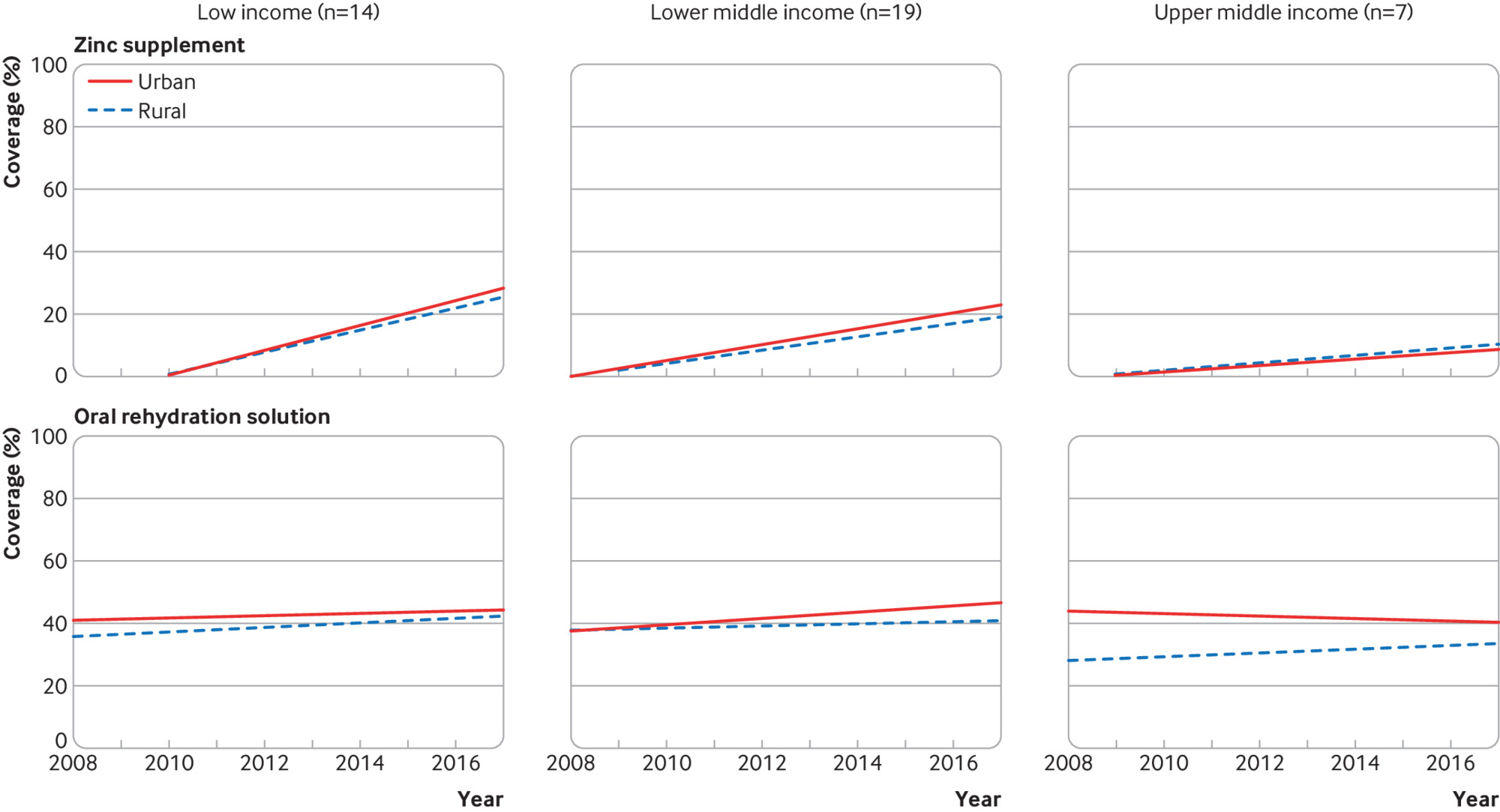 The range of strategies for delivery of vitamin A—twice yearly campaigns, routine services, bundling with immunisation—makes it difficult to characterise the opportunity gap in the same way as for the other interventions. Although our analysis shows that high dose vitamin A supplementation coverage is similar between urban and rural areas (fig 2), 10 year trends show declines in urban populations of low income countries (fig 5). Once heralded as a successful public health nutrition programme, it is particularly alarming that coverage has slipped by the greatest amount in sub-Saharan African countries. These countries with high child mortality are precisely the populations that would benefit most. Some attribute this decline to use of campaigns, which are subject to delay or cancellation, or concerns about overlap with other vitamin A programmes, including fortified foods.1213

Is there any good news?

Data show that some countries have successfully closed opportunity gaps, achieving high nutrition coverage and equity. For example, Senegal closed the opportunity gap for iron-folic acid during antenatal care. In 2017, iron folic acid coverage (63%) exceeded coverage of antenatal care delivery (56%). This runs counter to the typical pattern where iron-folic acid coverage is usually lower than that of antenatal care. Rwanda is noticeably different from other countries, with high early initiation of breastfeeding (81%) and high levels of facility delivery (91%) in 2014. The high coverage in this historically rural, but rapidly urbanising, country, also assures equity.

In 2012, the UN General Assembly endorsed a resolution on universal health coverage, declaring that all people will have access to affordable, quality essential preventive and curative health services across their lifespans. Universal health coverage was enshrined in the 2015 sustainable development goals, and momentum for it has been building, including a high level event at the 2019 UN General Assembly.

Unless countries leverage the momentum and invest in scaling up nutrition interventions as an integral component of universal health coverage, progress will remain off track. Key recommendations include:

Universal health coverage means quality care for all. Health services and nutrition interventions are targeting the same mothers and children. It is time to hold health systems accountable for their essential role in dealing with malnutrition.