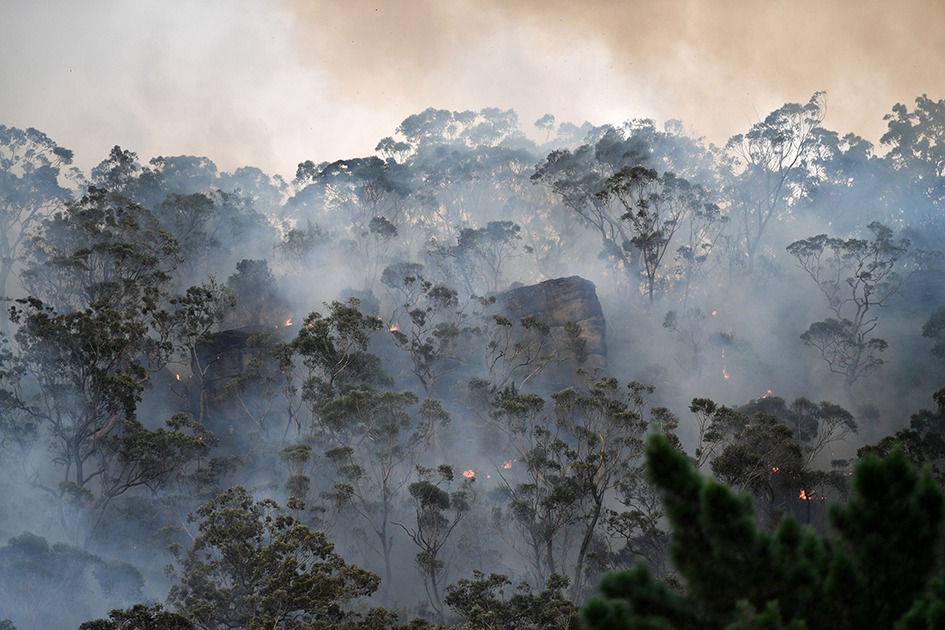 The number of people across New South Wales presenting to hospital emergency departments with respiratory problems increased by around 25% above the usual weekly average for the first week of December, and ambulance callouts are up by around 30%, says a report from NSW Health, the state health department.2

Sydney is in one of the worst affected areas. On 10 December the city’s air quality index—a composite score of levels of ozone, carbon monoxide, sulphur dioxide, nitrogen dioxide, airborne particles, and visibility—exceeded 2200, 11 times the hazardous score of 200. Since the start of December Sydney has had eight days where the air quality index exceeded hazardous levels and at one point its air quality was ranked worse than that in Shenzhen, China.3

Residents of a city that usually prides itself on its clean air have taken to wearing face masks.4

The main sources of the smoke affecting Australia’s largest city are two massive bushfires to its north west and south west. One of the fires has burned through nearly 320 000 hectares of bush since 26 October,5 and the other has destroyed more than 100 000 hectares.6

Richard Broome, NSW Health’s director of environmental health, said the situation was extremely unusual and that this was the longest period that Sydney had experienced such poor air quality. “What we have been seeing is an increase in the number of emergency department presentations with asthma and breathing problems, which is what we would expect.”

But the increase in presentations did not seem to be associated with an increase in hospital admissions, which suggested, Broome said, that people with respiratory conditions were seeking medical help before their condition got too bad. There is not yet data on the effect on death rates.

The health department has advised people with respiratory or cardiovascular conditions to avoid outdoor physical activity and remain indoors as much as possible.

Fay Johnston, associate public health specialist and environmental epidemiologist at the Menzies Institute for Medical Research in Hobart, Tasmania, said that the health effects of bushfire smoke were largely driven by the same fine particles—less than 2.5 µm in diameter, as in traffic or industrial air pollution. However, bushfire smoke had a more intermittent but very high pattern of exposure and included a complex, toxic mixture of gases. “A lot of the associated chemicals, products of incomplete combustion, are very irritating,” she said.

Johnston said that the greatest risk was to people with pre-existing conditions, although relatively little research has focused specifically on bushfire smoke.

“The health effects of smoke really depend on the risk of the person breathing it in,” she said. “The studies that have been done generally show a similar spectrum of associations with heart disease: out-of-hospital cardiac arrest, increase in death rates, and disruption to blood glucose control.”

Little relief is expected, with fires predicted to burn for many weeks and continuing hot, dry conditions and an above normal fire season forecast for the summer.

See other articles in issue 8226