Bend it like Beckham or fix them like Florence—proportional representation of healthcare in New Year honours: an observational study

Objectives To compare the proportional representation of healthcare workers in receipt of New Year honours (NYHs) with workers in other industries and to determine whether the NYH system has gender or geographical biases.

Conclusions In relation to the size of its workforce, a career in healthcare is not as “honourable” as careers in certain other industries. Geographical and gender biases might exist in the honours system.

The UK honours system recognises people who have “committed themselves to helping and serving the UK” (box 1). The New Year honours (NYHs) are appointments in recognition and reward of excellence in the work or charity (or both) of citizens of the UK and Commonwealth countries. They have been awarded as part of the New Year celebrations since 1890 by, or in the name of, the reigning monarch.1 The public nominates people for honours, and nominees are overseen by the Cabinet Office’s honours and appointments secretariat. Honours can be received in eight sectors: community, voluntary, and local services; arts and media; health; sport; education; science and technology; business and the economy; and civil or political services.

Some awards, known as orders, exist for select groups, including the Order of the Bath for senior civil servants and military officers, the Order of St Michael and St George for diplomats and those serving the UK abroad, and the Royal Victorian Order for those who have served the Queen or monarchy in a personal way.

The honours system has been criticised for being biased in favour of those in “Royal circles,” including politicians and civil servants—the reigning monarch is the “fountain of honour,” and those around the fountain are more likely to be “splashed.” In recent years, commentators have said that this bias extends to connected people, particularly celebrities.23 Amid concerns of cronyism and a broken system, the government has vowed to review the honours system to ensure that it “rewards genuine public service.”4 The NHS is a genuine public service that employs approximately 1.5 million people and is ranked among the best in the world in terms of its quality, accessibility, and efficiency.5 The health sector provides approximately 7% of the entire UK workforce.6 Most are unable to influence the honour system. We determined how the proportion of NYHs awarded for healthcare compared with the proportions awarded to workers in other industries in the UK and whether there were any gender or geographical differences in the NYHs awarded.

To calculate the proportion of honours received by each industry, we collated data on the number of people in that industry’s workforce. This information was available in the “employee jobs by industry” database from the Office for National Statistics (ONS).8 The ONS is the executive office of the UK Statistics Authority, a non-ministerial department of the UK government. The database is a quarterly estimate of jobs in various industries in the UK.

We created a spreadsheet to record data on all recipients of NYHs from 2009 to 2018. We collected data on the gender of each recipient, type of honour, which county of the UK they represented, and the sector of service. We separated NYHs into higher order (CHs, CBEs, and the various orders of knights and dames, based on a recent Cabinet Office report9) and lower order awards (all others) to determine any differences between industries for these groups.

We extracted workforce data from the final quarter of each year (2009-18). Five authors (JEH, ON, ES, AO’D, JAE) independently extracted ONS and NYH data from two years each, and the data was then cross checked by a different author. Disputes were resolved by consensus.

The relative risk (RR) of receiving an NYH for each industry compared with healthcare was calculated using the equation:

Where AR (absolute risk) is the number of NYHs for a sector divided by the number of people employed in the industry (size of workforce). A similar equation was used to compare industry differences in the proportion of higher order awards. RRs and 95% confidence intervals were calculated using the Epitools package in R.1011 The significance level was set at P<0.05 (two tailed) when comparing workforces and when comparing proportions of higher order awards.

Pearson’s chi squared test was used to compare gender differences in the proportion of higher order awards received. We determined the gender of recipients either by their name or by the gender prefix used in the NYH list. Rarely, internet searches were used to determine gender.

Distribution of New Year honours (NYHs) according to gender, sector of services, and order of honour between 2009 and 2018. Absolute risk (AR) of receiving an NYH is calculated for citations related to industry and the relative risk (RR) with 95% confidence internal of receiving an NYH for that sector versus healthcare 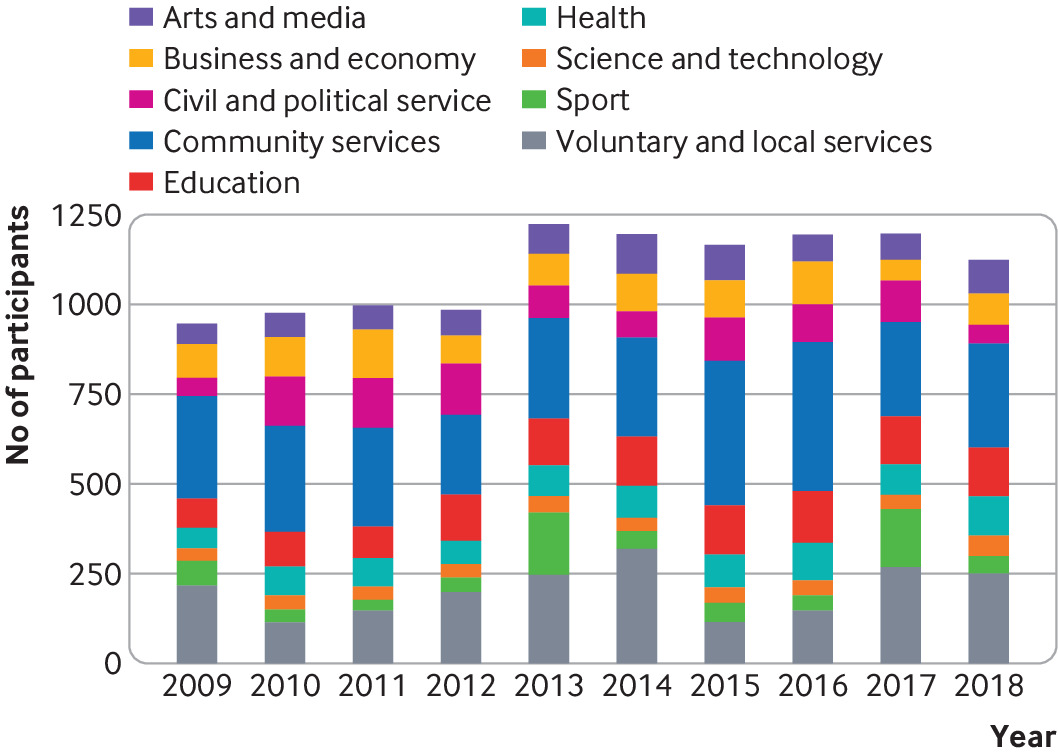 Differences in relative risk between honours for health and other industries

Differences in the proportion of higher order honours bestowed

The proportional representation of women in NYHs has improved over the period studied, but only about one third (496 of 1447; 34%) of the higher order NYH recipients were female (fig 2). The rate of receiving higher order awards was significantly higher for men (P<0.001) (table 2). 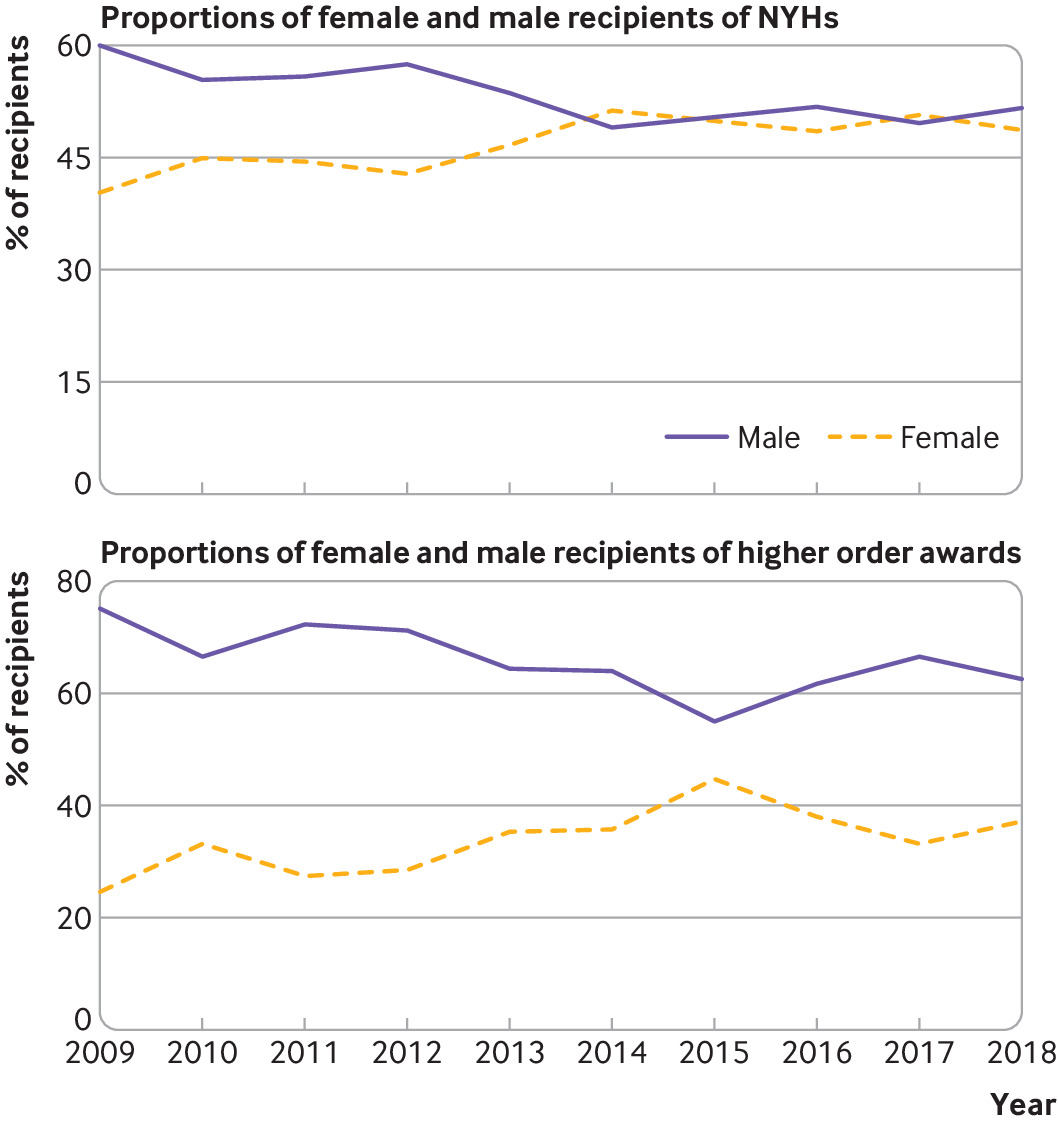 In this phaleristic study, we compared the proportional representation of various industries in the NYHs from 2009 to 2018. We found that the rates of receiving an award were significantly higher for people working in sport, arts and media, and to a lesser degree in the civil and political services and in business, than for people working in healthcare or in science and technology. We also found geographical differences, with 34% of awards bestowed on people living in London or southeast England. Finally, although proportional representation has improved for women over the past decade, the proportion of women receiving the higher order awards was significantly lower than men.

Is the honours system biased?

In the period examined, the proportions of recipients from each industry each year has remained roughly similar (except for awards for sports, which increased markedly after each Olympic year). Perhaps the Cabinet Office uses quotas to determine how many awards are received in each category. Quota systems negatively bias groups with larger workforces due to dilution. The NHS is the fourth largest employer in the world with approximately 1.5 million employees, and many more people work in private health in the UK.12 Assigning the same proportion of NYHs to the health industry as other smaller industries would reduce the chances of people in healthcare receiving an award. The higher rates of receiving an NYH in other industries than in healthcare might therefore be due to dilution rather than bias. The science and technology sector, however, is under-represented. This group has a similar size workforce to civil and political services and nearly double the size of sport but was less likely to receive an NYH than both industries.

Gender differences might be due to bias. This has been tackled to some extent by the increasing proportion of women recipients over the past 10 years (fig 2). But the low number of women receiving the higher order awards compared with men indicates that more needs to be done. Gender inequalities are not unique to the honours system. International evidence shows persistent under-representation of women in the film industry,13 corporate leadership,1415 and medicine.16 A 2017 study analysed the recipients of awards from the American Academy of Physical Medicine and Rehabilitation over the past 48 years, finding that women were substantially under-represented and that, strikingly, no female physician received an award in the most prestigious categories in 40 of the 48 year history of the ceremonies.16

Initiatives have been developed to target gender inequity in different industries.171819 But clearly more needs to be done. The Cabinet Office has recognised the under-representation of women and vowed to “step up efforts in outreach work, targeting women’s business and community networks to raise awareness of the [honours] system, and encourage nominations from those groups.”9

The Parliamentary Public Administration Select Committee’s 2012 report criticised the honours system as being focused on rewarding people for simply “doing their day job.”20 In particular, it noted that Whitehall bureaucrats and other senior figures, such as council chief executives, traditionally made a strong showing in the honours. The report said that too few honours were being awarded to ordinary citizens for the extraordinary contributions they make to their communities, which is what the system should be for. The report recommended that there should be no automatic honours for people who hold a certain post or for celebrities and sports stars at a certain level, which “too often seemed to still be the case.” Our results show that this over-representation probably exists, particularly in sport, arts and media, and civil and political services compared with healthcare, science and technology, and to a lesser extent education.

The ONS workforce data that we used to determine the proportion of NYHs in each industry are estimated using surveys of businesses and might not be entirely accurate. They are, therefore, a potential source of variation. Furthermore, the sector of service for NYHs might not correlate with the industry that the person works for—someone who works in education but has a voluntary role in healthcare, for example, might receive an award for services to health. We have considered the workforce data for each year independently of the other years. This approach does not take into account the proportion of people who already have an NYH in each industry and, therefore, might underestimate the proportion of recipients in each industry.

NYHs are awarded based on nominations from the public, so the differences in the proportions from different industries might simply reflect the referral practices of that industry. Thus, people in industries that work closest with the government and Cabinet Office (civil servants, politicians, those in the media) are more likely to refer a colleague for honours than people in healthcare. We contacted the Cabinet Office for a breakdown of nomination statistics, but this information was not available because of the rolling nature of nominations (a person might receive an award in a later round to the one in which they were nominated). This makes it difficult to calculate the nomination-to-award ratio for different categories. For completeness, we could conduct a survey of honours’ nomination practices between different industries to determine whether people in some industries are more likely to nominate a colleague than others.

We found that the rates of receiving an NYH are higher in some industries (arts and media, business and the economy, civil and political sciences, education, and sport) than in healthcare. The NHS is persistently voted among the best healthcare systems in the world. This is possible because of the extraordinary contributions being made by ordinary people working in healthcare—the very reason the honours system is alleged to exist. This needs to be reflected in the NYHs and may increase morale in the struggling NHS.