Prioritising action on alcohol for health and development

Despite the existence of cost effective interventions to reduce harmful use of alcohol, many countries are not giving it the attention it deserves, say Dag Rekve and colleagues

Non-communicable diseases (NCDs)—mainly cardiovascular diseases, diabetes, cancers, chronic respiratory diseases, and mental health conditions—are now the dominant cause of death and disabilities across the world, with alcohol use recognised as a leading risk factor.12 Alcohol use is also linked to violence, injuries, and infectious diseases,3 causing substantial economic losses and social harms, including harms to others.45 The health, social, and economic risks associated with alcohol consumption go beyond NCDs and justify greater public health and wider development action.3

Governments have made commitments to reduce the harmful use of alcohol through the World Health Organization global strategy on alcohol use, WHO and United Nations resolutions, and the 2030 sustainable development agenda.6789 Although governments have endorsed a set of proved, cost effective, and feasible interventions to tackle the harmful use of alcohol,10 progress in the formulation and implementation of national and local alcohol control measures has been uneven.310 Meeting global, regional, and national health and development goals will require greater global and national action to formulate effective policies that reduce the harmful use of alcohol, commitment to enhance and accelerate the implementation and monitoring of existing policies, and prevention of industry interference.3111213

Need for action on alcohol

Alcohol related harm affects all countries. Although the European region has the highest total per capita consumption of alcohol and the highest share of all deaths attributable to alcohol compared with other risk factors for the global burden of disease, low and middle income countries, and especially Africa, have the highest age standardised attributable deaths per 100 000 people, indicating greater harm per litre of alcohol consumed than in wealthier countries (fig 1).3 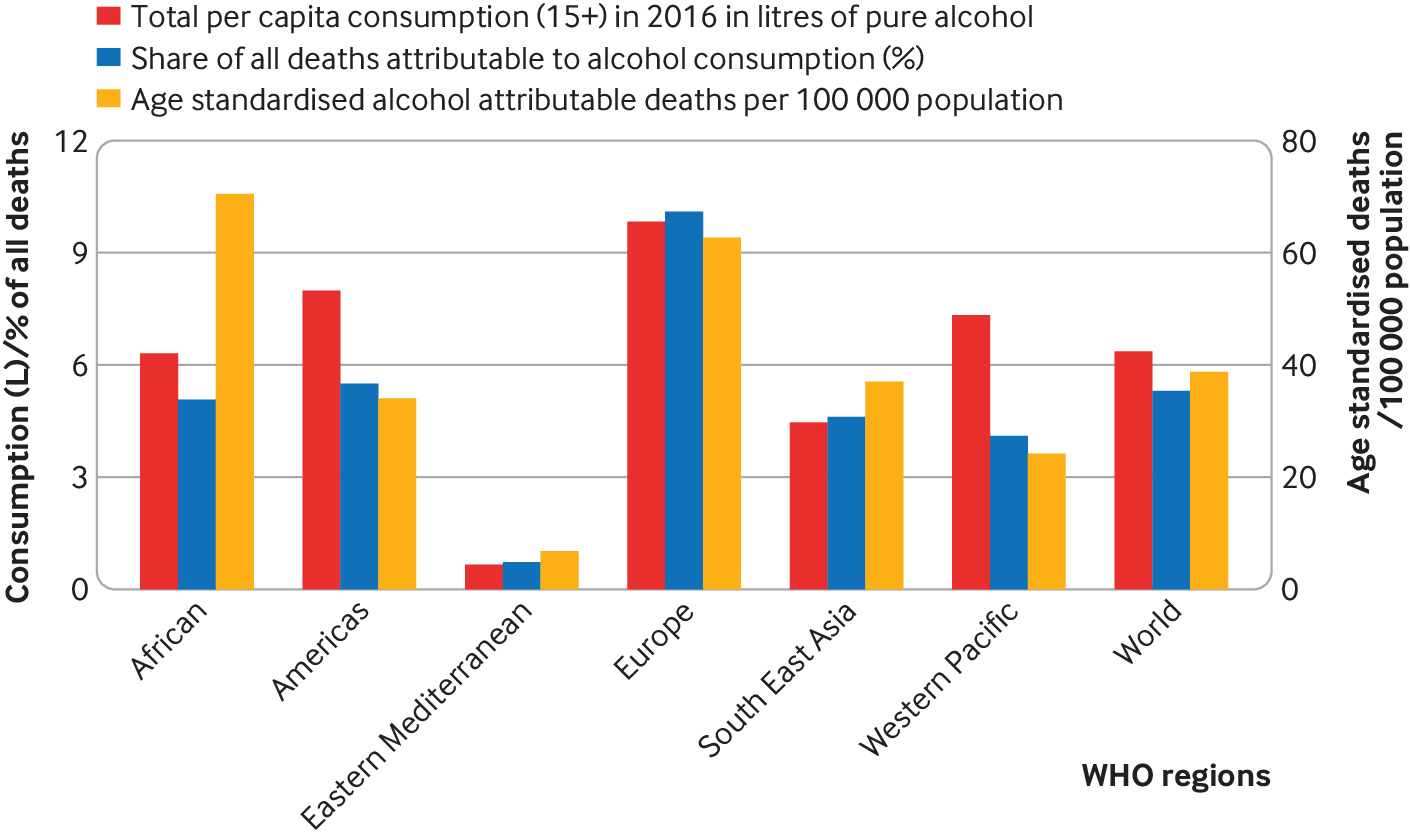 Alcohol accounts for 7.1% and 2.2% of the global burden of disease for men and women respectively and is the leading risk factor for premature mortality and disability among those aged 15 to 49 years, accounting for 10% of all deaths in this age group.2 People of low socioeconomic status are disproportionately affected, underlining the inequity perspective in alcohol related harm.1617

Recent modelling forecasts that global targets to reduce harmful use of alcohol will not be met.18 The current rates of alcohol consumption and population growth are two important considerations when assessing the future harms of alcohol. In 2016, 43% of the world’s population aged ≥15 years had consumed alcohol in the previous 12 months.3 This equates to 2.3 billion people. In Africa, 32% of the adult population currently consumes alcohol, and the population is predicted to grow by 1.2 billion people by 2050.19 Without action Africa could see an increase in both the absolute number and proportion of people consuming alcohol, the amount drunk per capita, and heavy episodic drinking.18 There are similar challenges in other parts of the world—for example, South East Asia has seen a 29% increase in alcohol consumption per capita since 2010.3

The WHO global alcohol strategy, endorsed by the World Health Assembly in 2010,9 provides guidance on formulating and implementing effective national alcohol policies. In 2017, the World Health Assembly endorsed three effective interventions that cost ≤$100 (£78; €90) per disability adjusted life year (DALY) averted in low and middle income countries. These so called “best buys” are increasing excise taxes on alcoholic beverages, comprehensive restrictions on alcohol advertising, and restrictions on sales of alcohol.

Implementation of the three best buys would result in a return on investment of $9 for every $1 invested.20 Over 50 years, a 20% global increase in alcohol taxes alone could avert nine million premature deaths.21 Revenues from excise tax, alcohol company taxes, and licensing fees could also help cover, or even meet, the costs of a comprehensive alcohol control programme, the prevention and treatment of disorders caused by alcohol use, as well as contributing to the funding of other health and development priorities. A 20% increase in the price of alcohol through higher taxes could accumulate as much as $9tn in increased revenues globally over 50 years.21

The World Health Assembly also endorsed measures against drink driving (including setting legal limits for blood alcohol concentration) and the provision of brief psychosocial interventions for people with hazardous or harmful alcohol use.101222

To support countries in scaling up implementation of these five cost effective interventions, a new WHO led initiative called SAFER was launched in 2018 (box 1).

Some countries have shown the benefits of implementing evidence based, cost effective, and high impact policies.23 The Russian Federation, for example, implemented alcohol control measures in 2003. By 2016 recorded consumption of alcohol had fallen by 40% and unrecorded consumption by 48%.3 Over the same period all-cause mortality dropped by 39% in men and 36% in women, with the sharpest decline in causes of death linked to alcohol consumption.24

Nevertheless, most countries, particularly low and middle income countries, have not implemented a comprehensive set of alcohol policies.3 No low income country has reported increasing the resources for implementing alcohol policy since the WHO global alcohol strategy was adopted in 2010. In addition, many countries are failing to implement the best buys, with low and middle income countries more likely to have weaker policies.325 The 2018 WHO global status report on alcohol and health highlights problems with all of the five most cost effective measures.

Although physical access to alcohol is proved to reduce alcohol related harms, less than one third of countries have regulations on outlet density or days of sale. Some countries, mainly low and middle income countries in Africa, still have no legal minimum purchase age.

Most countries have some restrictions on alcohol advertising, but marketing restrictions on the internet and social media are generally further behind, suggesting that regulation continues to lag behind technological innovations and e-commerce, including rapidly developing new delivery systems. Most of the countries that reported no restrictions across all media types were located in the African or Americas regions.

Increasing the price of alcohol is the single most effective strategy to reduce and prevent alcohol related harm. Although 95% of reporting countries implement alcohol excise taxes, few use such taxes as a public health policy to reduce consumption and less than half use price strategies such as adjusting taxes to keep up with inflation and income levels, imposing minimum pricing policies, or banning selling below cost or volume discounts.

Finally, despite the effectiveness of brief psychosocial interventions in primary care settings, scaling them up continues to be a challenge in most countries given the limited resources for capacity building and monitoring of health systems. The estimated treatment coverage for alcohol use disorders is also low across the world, and global standardised indicators are being developed to measure treatment coverage for alcohol and other substance use disorders.

Several of the most cost effective interventions require legislative or regulatory action— for example, taxes, marketing restrictions, regulations on availability, including sale to minors and licensing, and road traffic laws. An effective programme requires broad political commitment and dedicated and sustained financing at national and local level. Regulatory approaches need to be supported by effective enforcement.

Since all the most cost effective interventions restrict commercial activity, governments have and will face opposition from vested interests.262728 In this regard, any involvement of the alcohol industry in public health decisions has substantial risks with limited or no benefits. Alcohol industry activities related to marketing, education, corporate political activities, and funding of research can undermine public health efforts by hedging them against more effective interventions and distorting the research agenda.1329 Protective systems must be put in place in the forms of guidance and enforceable codes of conduct regarding engagement.3031

The objective of the WHO led SAFER initiative is to provide support for countries in reducing the harmful use of alcohol by enhancing the ongoing implementation of the global alcohol strategy and other WHO and UN instruments. SAFER is based on the accumulated evidence of cost effectiveness of different alcohol control measures and recognises the need to protect public health oriented policy making from alcohol industry interference as well as strong monitoring systems to ensure accountability and track progress in the implementation of the SAFER interventions.

SAFER is an acronym for the five most cost effective interventions to reduce alcohol related harm:

WHO, the secretariat of the UN Interagency Task Force on the Prevention and Control of NCDs, and the UN Development Programme together with IOGT International, the NCD Alliance, the Global Alcohol Policy Alliance, and Vital Strategies have been working together to initiate and develop SAFER, engage more partners in the initiative, raise resources, and implement SAFER at country level.

Countries and development partners from governments, philanthropy, civil society, and selected private sector entities are now armed with an evidence based, action oriented programme to rally around.

Effective alcohol control policies have important economic and public health benefits, but their development and execution is uneven and not proportional to the harm from alcohol. Effective action will require a coordinated approach across government. In light of this, all countries will benefit from a periodic review, adjustment, and strengthening of their policies and programmes. Civil society can advocate for action, catalyse political will, and hold policy makers and government agencies to account. The alcohol industry should not be involved in the development of public health oriented government policy to reduce the harmful use of alcohol.

Over the past decade, significant progress has been made in tobacco control, largely as a result of political pressure and catalytic funding from national and international development partners. Now that countries have cost effective and feasible interventions for controlling harmful use of alcohol, it is time to accelerate action, through initiatives such as SAFER, to reduce the health and development burden from the harmful use of alcohol: people and societies everywhere will benefit.