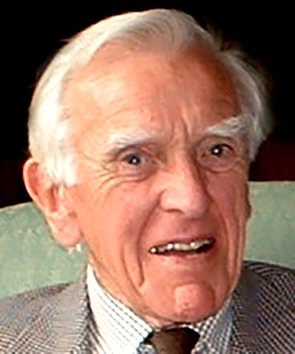 Kenneth Aubrey Stewart (always known as Aubrey) was born in Belfast on 10 August 1925 and died from old age on 6 April 2019, aged 93. He spent his childhood in Northern Ireland and obtained his medical degree at Queen’s University Belfast. After qualifying he came to England, decided on a career in anaesthesia, and rotated through various junior hospital posts. He did his national service in the Royal Air Force as an anaesthetist at RAF Hospital Ely, and completed his training as a senior registrar in Cardiff. Cardiff had one of the few academic units in the country at that time, but much more importantly, it was where Aubrey met his future wife, Susan, a physiotherapist, and they were married in 1960. That same year he was appointed as a consultant anaesthetist in Leicester. He worked at all the hospitals in that city and with Susan brought up their family of three boys.

At that time Leicester was a fairly typical provincial city, and a rather prosperous one, though somewhat under resourced as far as the NHS was concerned. For some obscure historic reason the Trent region received a slightly smaller per capita allocation than other regions, and Leicestershire received less than the other counties in the Trent region. All this changed in the 1970s when central government decided to create a new medical school in Leicester. It came with rapid expansion and many challenges for the existing medical staff. With his extrovert and positive approach to colleagues and his marvellous sense of humour, Aubrey soon became an important personality in the hospital and the department of anaesthesia. He gave his full support and strong encouragement to the creation of an academic department of anaesthesia and in 1979 the foundation chair was filled by Professor Graham Smith.

Aubrey was a superb role model for many trainees and junior colleagues. An excellent anaesthetist, with a wonderful rapport with both patients and surgeons, he was—unsurprisingly—much in demand in private practice. However, he never let this interfere with his very full NHS commitments, and he always encouraged his junior colleagues to share some of the “private practice cake.”

He was very much involved in the corporate life of the hospital, including a year as president of the local medical society. Aubrey was popular with everyone, including secretaries, porters, and domestic staff. He was by nature a person who loved being convivial, but all these relationships were inspired by his understated but deeply held Christian faith. In his long retirement he became a pillar of his local Anglican church in Ashley, Northamptonshire, in spite of being a lifelong Presbyterian.

Outside work, he was interested in history and heritage, and acquired a classic Alpha Romeo sports car. He shared a Wurlitzer organ with one of his friends, who was a hospital porter and also a local DJ. His wide knowledge of antiques made him much in demand as an auctioneer for charity auctions.

Aubrey remained an enthusiastic tennis player until well into his 80s; he and Susan made a formidable duo on court. In his younger days he was a regular squash player, and he organised a family hockey match and social gathering every Boxing Day.

With his love of antiques and curiosities, he persuaded the hospital authorities to start a medical museum. In fact, it could honestly be said that Aubrey was the medical museum. He hunted down all sorts of weird and wonderful instruments and memorabilia, assembling such a varied and interesting collection that the medical museum in Leicester became one of the best known outside London. Long after he retired he continued to support the museum, keeping it open for visitors and school parties, and carefully cataloguing every exhibit. He successfully fought a continuous battle with management over many years for possession of the space that housed the museum. When finally a move was enforced, Aubrey although in his late in his 80s, oversaw photographing, cataloguing, and packaging of all the exhibits before their storage at Glenfrith in Leicester.

He died peacefully and leaves Susan, their three sons, and three grandchildren.