Trends in incidence of total or type 2 diabetes: systematic review 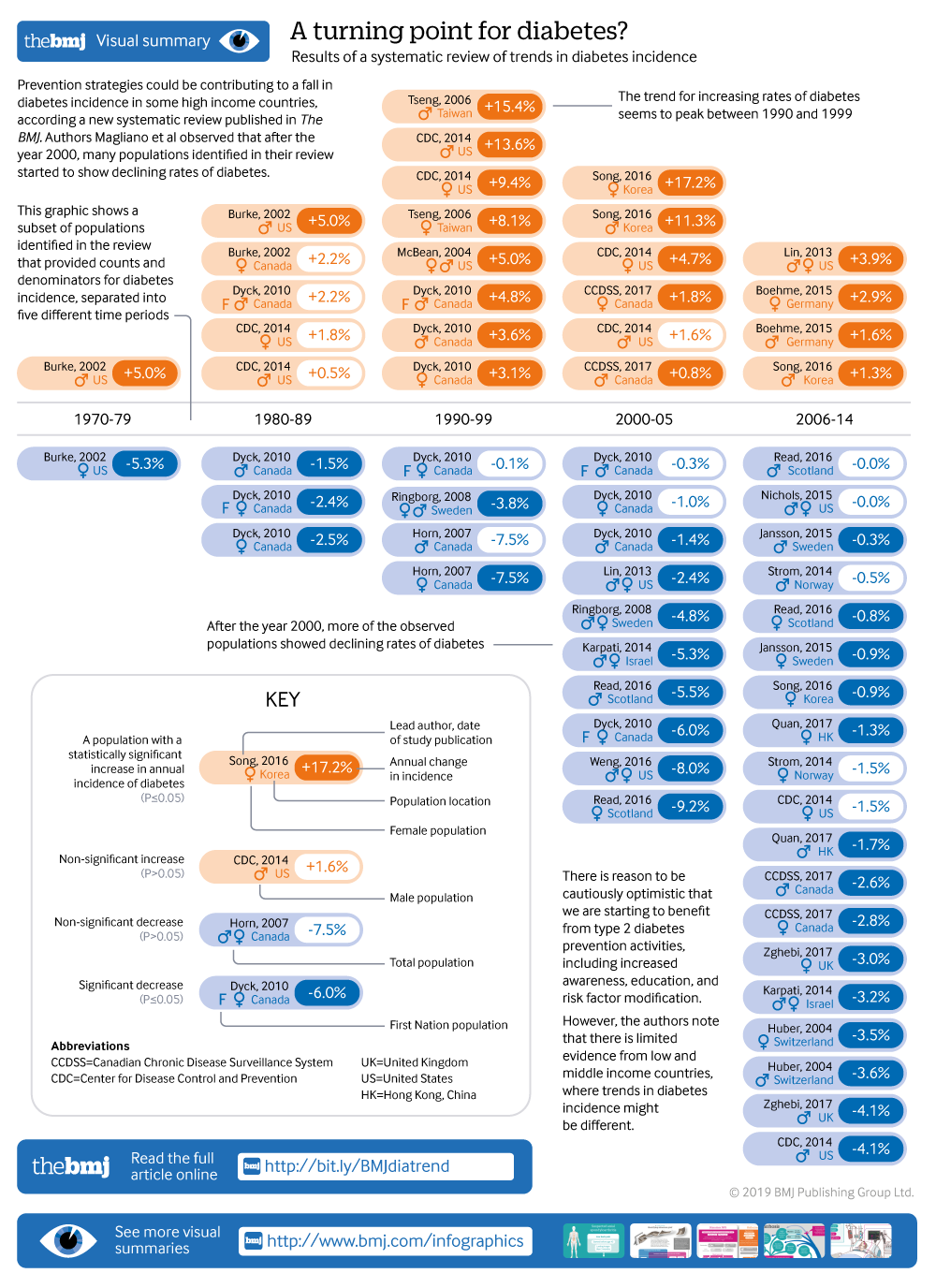 Showing the turning point in diabetes incidence in 61 populations

Re: Trends in incidence of total or type 2 diabetes: systematic review

Diabetes incidence, if not yet prevalence and disease burden, appears to have decreased in developed countries. As possible reasons, Magliano and colleagues cite public health initiatives, increased public awareness, dietary changes and decreased prevalence of diabetes risk factors. However, there is little evidence that any of these has actually impacted on diabetes incidence. Adiposity is the major risk factor for diabetes, and this has at best plateaued in some countries while it continues to increase in others. 1 We need to understand why there is an apparent disparity between the incidence of diabetes and the prevalence of obesity.
Medical treatment of pre-diabetic states is one obvious factor. Incidence of diabetes in the US is now around 6 per 1000 adults per year. Metformin prevents the development of diabetes in those at risk. Between 2000 and 2015, off-label prescribing of metformin in the US increased more than 25-fold to 20 per 1000 adults. 2 Additionally, widespread use of GLP-1 agonists, particularly liraglutide, for weight loss may have impacted on diabetes incidence. SGLT2 inhibitors are also widely used off-label for weight loss. Around 250,000 bariatric operations (equivalent to one per 1000 adults) are performed in the US each year, and again this may also have significantly decreased diabetes incidence.
Epidemiological studies on obesity have, so far, focussed on body weight and body mass index (BMI). However, the distribution of body fat is also important, and may be changing in the population. Accumulation of gluteofemoral subcutaneous fat protects against diabetes and cardiovascular disease. 3 Lipoedema is an exaggerated form of this type of fat accumulation and develops under the influence of oestrogen. It was considered rare when first described in 1940 but now affects around 11% of women. 4 Lipoedema patients are characteristically insulin sensitive and thus relatively protected from diabetes. Men are becoming less androgenised and more oestrogenised. This has led, for example, to decreased sperm counts and quality in recent years and also affects body fat distribution. These hormone-driven changes are producing obese phenotypes that are either not predisposed to diabetes, 5 or are predisposed to diabetes in spite of not being insulin resistant. 6 The most obese countries in the world are the island nations of Oceania. South Sea Islanders characteristically have high prevalence of obesity with marked accumulation of subcutaneous fat, but traditionally had low prevalence of diabetes until more generalised obesity became common in recent years.
Up to 40% of the population is pre-diabetic. Pharmacologic and surgical treatment of such individuals clearly decreases risk of diabetes and must be having an effect at the population level. Body composition and body fat distribution are important determinants of diabetes and cardiovascular risk and should now be routinely evaluated in clinical practice.

Control of Diabetes in India

Magliano et al. highlighted a rise in diabetes incidence only in a fraction of the population and even a fall in some of the population. [1] Considering the efforts being deployed on the prevention and control of diabetes, this finding is encouraging.

As per the International Diabetes Federation (IDF), the estimated number of cases of diabetes in India in the age group of 20-70 years was 73 million in 2017. [2] In India, among the risk factors implicated in Disability Adjusted Life Years (DALY), high fasting plasma glucose is the fifth most common one, contributing 6.6% of DALY. [3]

The Government is implementing the National Programme for Prevention and Control of Cancer, Diabetes, Cardiovascular Diseases and Stroke (NPCDCS) with a focus on awareness generation, early diagnosis, treatment and follow up. Population Based Screening has been started for people above 30 years of age for diabetes and other NCDs. The suspected patients are referred to health centre and followed up if diagnosed with diabetes. This intervention is expected to yield early diagnosis of diabetes and prevent future complications. [4] Better management of diabetes may be ensured, once HbA1c is made available and accessible across the country. [5]