Raising and responding to frontline concerns in healthcare

Frontline staff are well placed to identify failings in care, but speaking up requires a supportive organisational culture to be effective, say Russell Mannion and Huw Davies

The independent inquiry into Liverpool Community Health NHS Trust announced in June 20191 is the culmination of a well worn path. Concerns about care are raised and ignored, staff are denigrated or bullied, the situation escalates into whistleblowing to outside authorities, and eventually—often years later—a formal inquiry is set up to get to the bottom of things. The long line of inquiries in the UK and elsewhere highlights the sentinel role of staff “speaking up” when they see unsafe or poor quality care.234 But exhortations to speak up (encapsulated by the statutory duty of candour introduced in the NHS after the Francis inquiries into failures at Mid Staffordshire NHS Trust45) belie the complexity and ambiguity that it creates for staff.

Raising concerns about care can be as simple and everyday as making an observation or suggestion to colleagues while delivering care. Informal commentary or intervention, gentle reminders, humour, or sarcasm may be used to draw attention to perceived concerns.6 If this doesn’t work, staff have the option of stronger measures such as more explicit conversations; drawing the attention of coworkers and line managers to the concerns; placing critical observations “on the record” within formal accountability, appraisal, or performance management systems; or seeking remedial action plans. If the problem still remains they can leapfrog traditional line management hierarchies to report to someone more senior. As a last resort staff may decide to “blow the whistle”7 to outside authorities (such as regulators, professional bodies, or trades unions), political representatives, or the media.

Individuals voicing concerns should be commended for their insights and challenge, but sometimes their observations are unwelcome because they draw attention to personal and collective failings or to irresolvable problems and tensions. Staff raising concerns may then be perceived as unhelpful—denigrating services, fracturing organisational relationships, and damaging professional and organisational reputations.

As the stakes get raised, competing narratives begin to form and harden around what can be quite ambiguous circumstances or events. These narratives can quickly extend to impugn motives, competencies, and even sanity, personalising disputes and making them harder to resolve.

Crucially, decisions about whether concerns affect safe and high quality care are often not clear cut. In pressured systems, differentiating “sufficient but stretched” resources (such as staffing) from “insufficient and unsafe” resourcing is complicated. Local narratives about “coping under pressure” may stop staff from identifying risk, and a lack of objective standards can lead to the gradual expansion of what is seen as acceptable.8

Moreover, it would be naive to assume that all those voicing concerns are driven entirely by genuine concerns: some may be motivated, at least in part, by work grievances or personality clashes. Allegations may even be malicious. Importantly, the motivations behind actions (both of raising and of responding to perceived concerns) may be partially obscured, even to the protagonists.

Speaking up is thus complex. There is no simple binary choice between voicing concerns and keeping silent, and lack of visibility has given rise to the pejorative notion, sometimes promoted in the media, that healthcare professionals are culpable bystanders who tolerate poor standards of care. Instead, we need to focus on what can be done to support healthcare professionals in speaking up and ensuring they are listened to.

Supporting and inhibiting speaking up

Although some research suggests that there are relevant individual factors that can promote clearer articulation of frontline concerns, situational factors are also important (box 1). Many of these relate to the local organisational culture,9 especially the presence (or absence) of “psychological safety” and the normative expectations about the giving and receiving of feedback. Also important are the degree of social cohesion in the care team, the attitudes of senior leaders,10 and the presence (or absence) of authority gradients, professional demarcations, and deference.

Expectations about responses within the system are especially powerful. An open culture where transparency, participation, and feedback are encouraged can be conducive, whereas expectations of inaction or retaliatory action are clearly inhibitory. In this, the expectations around speaking up can be difficult to disentangle from the broader managerial culture around performance and accountability.

Refocusing on hearing and acting

Speaking up is only the first step; concerns also need to be heard and addressed. Senior clinicians and hard pressed managers may be reluctant to acknowledge, accept, and act on concerns from the frontline, especially when these are relayed by staff with less experience and seniority. Sometimes the concerns raised simply do not register, being lost in the daily hurly burly; at other times they may be noted but downplayed or considered as misplaced, unimportant, or irrelevant. Hierarchies and job specialisations can contribute to this tendency to downplay or sidestep unwelcome news, as can pre-existing narratives of success or competing priorities or crises that monopolise managerial attention. In extreme cases, those that raise concerns may be harmed by their actions, including being disciplined or reported for misconduct to professional bodies.12

Attempts to use speaking up as a means of improving services need to attend to these organisational dynamics that resist the emergence of bad news. In highly stratified and hierarchical organisations, such as most healthcare facilities, the entrenched status and power differences between different professional and occupational groups (eg, between nurses and doctors, or between frontline staff and managers) are a key part of this. Moreover, just as the actions of those voicing concerns may be complex, variably motivated, ambiguous, and contested, so too can be the responses of those in authority (within and outside the organisation). While an unwillingness to hear and resistance to change are common, positive responses include openness to further inquiry, shifts in attitudes and understanding, and direct actions that support beneficial change. Understanding how to encourage these positive actions is essential.

It is widely recognised that speaking up takes courage, but it is less obvious that it may also require courage to accept that the concerns raised have merit. When a manager acknowledges the need for change, they are taking on the responsibility of acting. This may require challenging colleagues, changing routines, redirecting resources, and speaking up to higher authorities, with all the risk and exposure that that entails. The notion of “shooting the messenger” extends to those who have to convey frontline concerns to other parts of the system, so supporting “hearer courage” and protecting those who relay unwelcome messages may be as important as supporting speaking up in the first place.

A study of senior managers identified two broad categories of behaviour that the authors termed “problem sensing” and “comfort seeking.”13 In problem sensing, managers seek out issues and concerns, drawing on a wide range of hard data and soft intelligence. In contrast, comfort seeking arose when managers limited their purview to reassurances from limited sources that systems were compliant with regulatory standards and that everything was fine. When comfort seeking behaviours predominate managers can disassociate themselves from the raising of frontline concerns. Moreover, powerful systematic biases in group and team decision making, such as strong group affiliation and groupthink, can make healthcare professionals less willing to hear and respond to concerns about unsafe care.14

Encouraging people to listen, supporting courageous actions through protective policies, and countering inward looking and self comforting dynamics can help support an effective response to frontline concerns. The key is to create space for engaged and curious dialogue.15

It is important to recognise the diversity in the willingness of frontline staff to speak up and of organisational actors to listen. Figure 1 shows how this diversity can give rise to different dynamics. Too often, healthcare organisations reside in the bottom left quadrant of the figure, where staff are unwilling to speak up and more powerful people in the organisation are unwilling to hear troublesome messages. Such a dynamic can be heavily self reinforcing. In organisations where speaking up has been encouraged, or even mandated (as it is now in the NHS), unless the local organisational dynamic is also changed those speaking up may be vulnerable and speaking up is unlikely to be maintained. 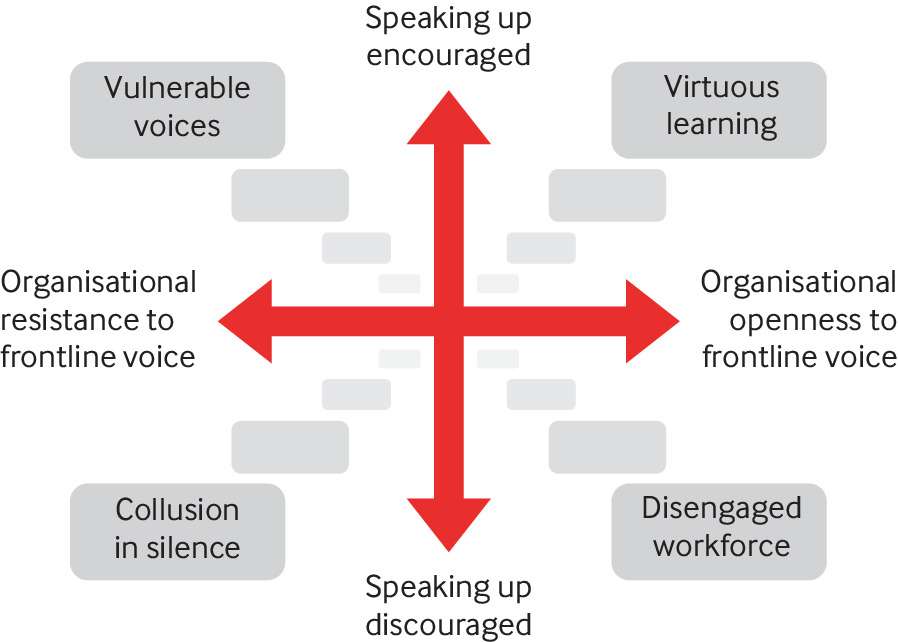 Dynamics of speaking up and being listened to in healthcare organisations. The aim should be to move to a truly learning organisation with an open culture (top right)

A longer term goal of both policy and operations management should be to move to a virtuous dynamic of local learning that would obviate the need for powerful but cumbersome legal safeguards. It remains to be seen whether the creation of freedom to speak up guardians in the NHS will alter the entrenched dynamics we have described. Recent exploratory work in the United States aimed at supporting such a transition used confidential interviews to identify the reasons why staff were reluctant to speak up, followed by carefully tailored interventions to encourage voice and build local capacity for holding difficult conversations.16 Such intervention strategies hold great promise but need further development and testing.11

In summary, speaking up cannot simply be mandated by policy diktat or ensured through legislative change, although both may play important supporting roles. Reform is needed in all parts of the system, but better encouragement of diverse frontline voices and sustained managerial support for effective response to those voices are paramount.

See other articles in issue 8213