This study was performed in accordance with Preferred Reporting Items for Systematic Reviews and Meta-Analysis (PRISMA).33 The protocol for this review was registered with PROSPERO (CRD42018117823).

We excluded studies if they were case reports, case series, or observational studies; if all the participants received vitamin D; if they included pregnant or lactating women, or critically ill patients; if they used hydroxylated vitamin D or vitamin D analogues (which could differ from native vitamin D in effect and safety, including lower risk of fall34 and higher risk of hypercalcaemia1034).

Two researchers (YZ and LJ) independently assessed the quality of all included trials by using the Cochrane Collaboration risk of bias tool.35 They also examined the quality of evidence for outcomes using the grading of recommendations assessment, development, and evaluation (GRADE) approach.36

We performed statistical analyses using RevMan (version 5.3.3; The Cochrane Collaboration) and the meta package in R (version 3.4.3; R Project for Statistical Computing). Analyses for all outcomes were conducted on an intention to treat basis. We used risk ratios and their associated 95% confidence intervals to assess outcomes, and considered a P value less than 0.05 to be statistically significant. We assessed heterogeneity using the I2 test.37 If significant heterogeneity was not present (I2<50%), we used fixed effects models to pool outcomes; we used random effects models when significant heterogeneity was present (I2≥50%). The possibility of small study effects was assessed qualitatively by visual estimate of the funnel plot and quantitatively by calculation of the Egger test, the Begg test, and the Harbord test.38

We performed trial sequential analysis to explore whether cumulative data were adequately powered to evaluate outcomes. Trial sequential analysis (version 0.9.5.10)39 was used to maintain an overall 5% risk of type I error and 80% power. We initially anticipated an intervention effect of a 10% relative risk reduction for all cause mortality. In additional analyses, we used progressively smaller thresholds (7.5% and 5%) until the optimum sample size exceeded the actual sample size. 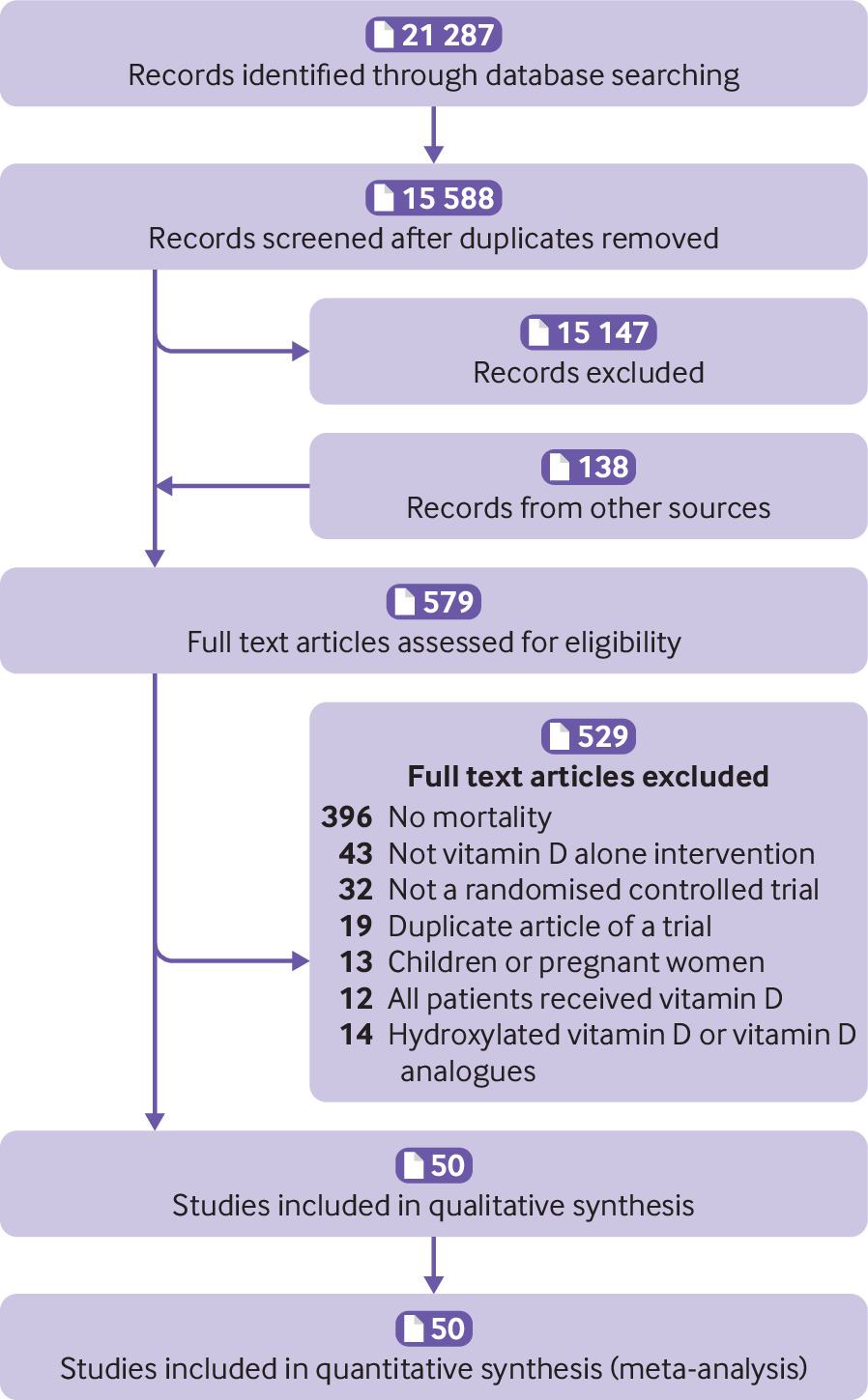 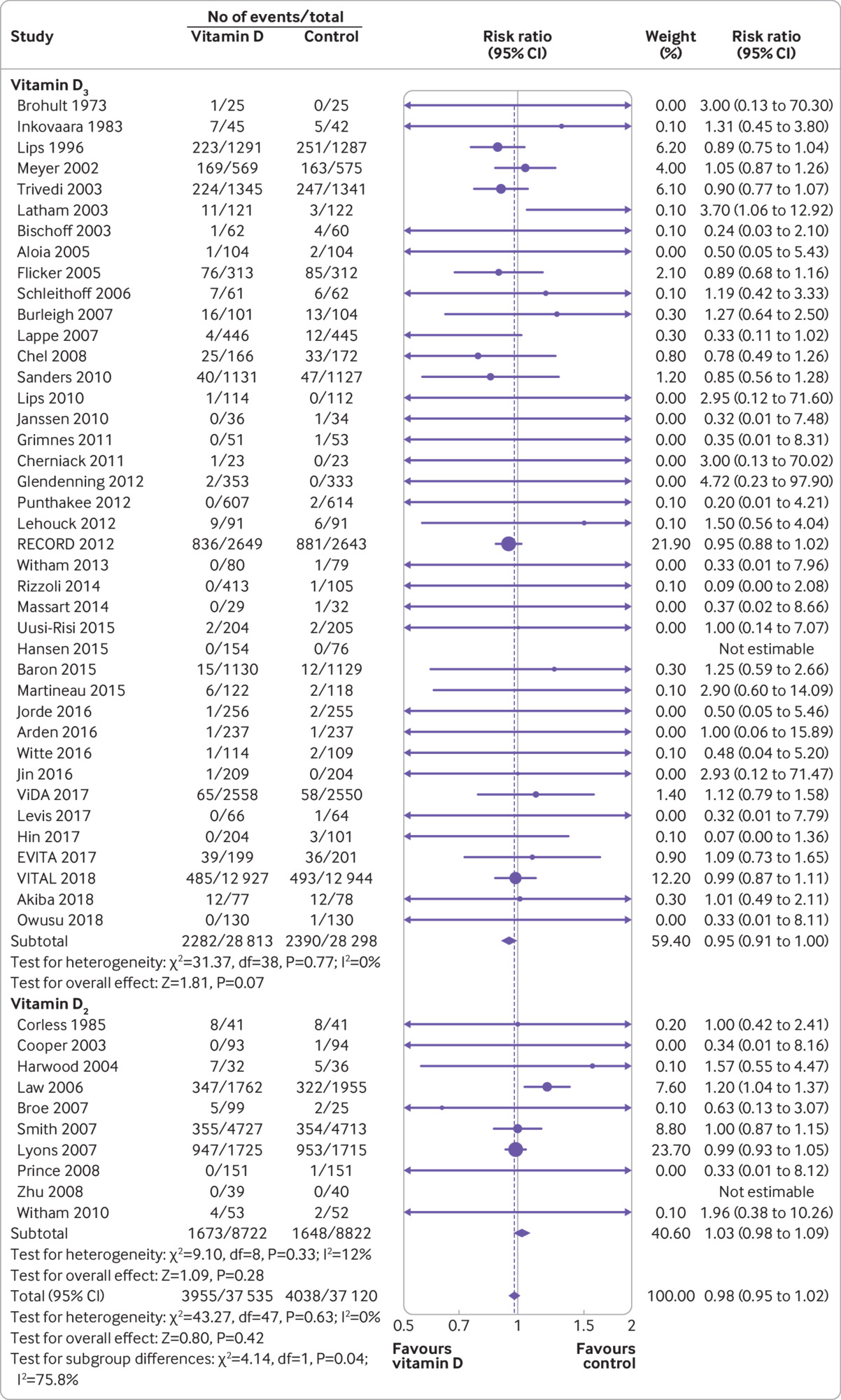 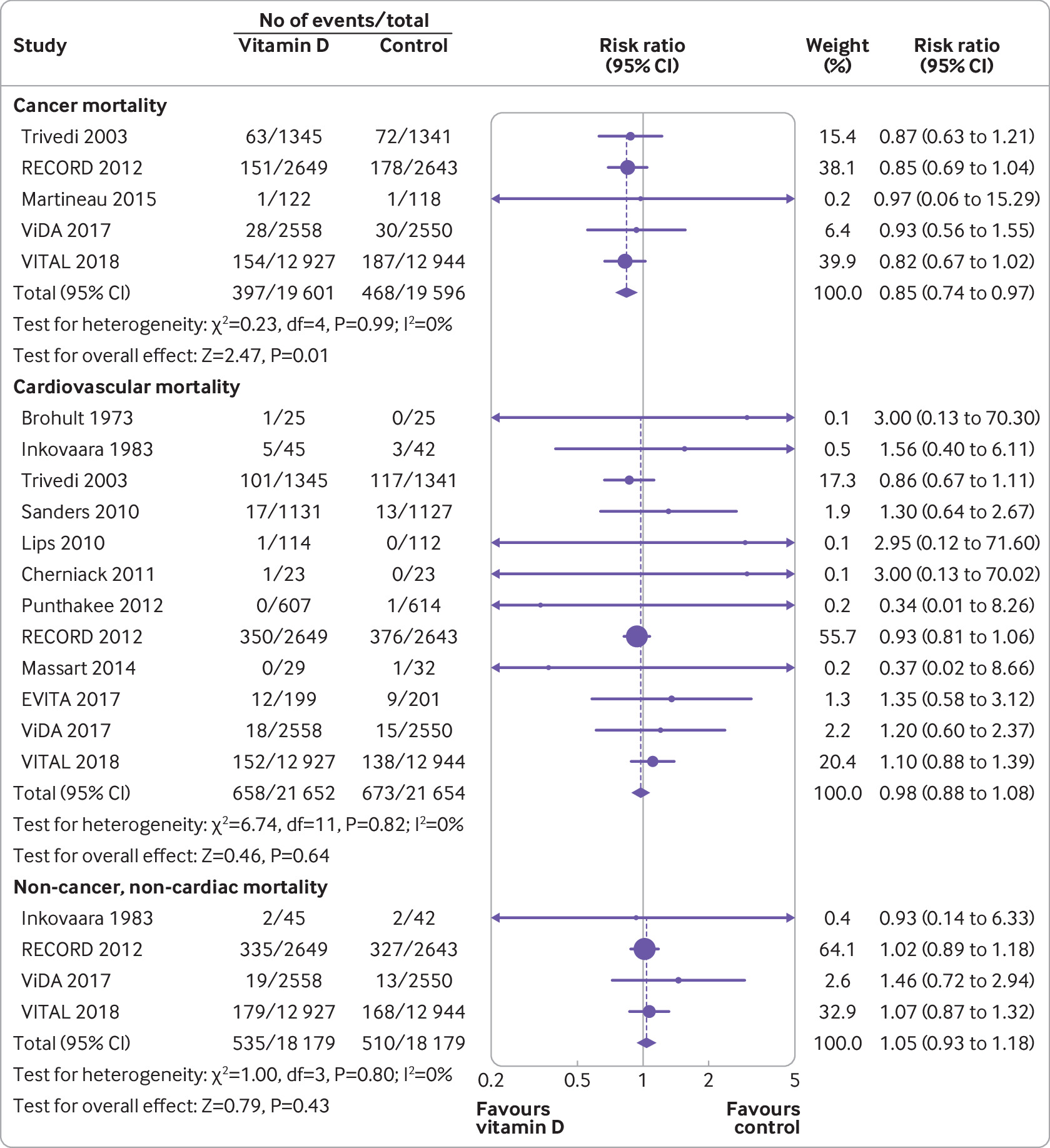 In this meta-analysis of 50 randomised controlled trials with a total of 74 655 participants, vitamin D supplementation was not significantly associated with total mortality (risk ratio 0.98, 95% confidence interval 0.95 to 1.02). The findings suggest that vitamin D supplementation reduced cancer mortality by 15% (95% confidence interval 0.74 to 0.97), but not mortality from cardiovascular disease, cerebrovascular disease, or ischaemic heart disease.

The results of this study on all cause mortality differ from two previous systematic reviews.51011 A Cochrane review in 2014 found that vitamin D supplementation decreased all cause mortality in analyses of 56 trials with a total of 95 286 participants (relative risk 0.97, 95% confidence interval 0.94 to 0.99, P=0.02).10 In the same year, a systematic review by Bolland and colleagues that included 40 trials with a total of 81 173 participants also suggested a small effect on all cause mortality (0.96, 0.93 to 1.00, P=0.04).11 The previous reviews probably reached more optimistic conclusions as a result of different selection criteria and newly published trials. Compared with these reviews,1011 we excluded more than 10 trials totalling approximately 50 000 participants of vitamin D administered with calcium, six trials73747576777879 of hydroxylated vitamin D or vitamin D analogues, and one trial80 retracted in 2017. To determine whether the null finding was driven by excluding trials which had been included in previous reviews, we performed two sensitivity analyses by adding trials that were originally excluded, and confirmed the results of the overall analysis. Moreover, this study additionally included 17 randomised controlled trials1617181920212223242526272829303132 published after 2014, so that the more recent trials accounted for 50.3% (37 568/74 655) of the total number of participants.

Vitamin D3 is the most widely used type of vitamin D supplementation and has a clinically relevant effect of reducing all cause mortality by 5%, with the P value and 95% confidence interval close to the level of formal statistical significance. The current study is not a positive study, but it is also not an unambiguously negative study. In addition, subgroup analyses are observational by nature and are not based on randomised comparisons.87 Therefore, the effect of vitamin D3 on all cause mortality requires additional evidence, preferably gathered by future large randomised controlled trials.