Erosion of women’s reproductive rights in the United States

An already deteriorating situation is now critical for many vulnerable groups

When President Trump took office in 2017, one of his first actions was to reinstate the global gag rule, a policy that bans US foreign aid for family planning being awarded to organisations that provide, make referrals to, or advocate for safe abortion services.1 The global gag rule typically oscillates according to the administration in power: Democrats revoke it and Republicans reinstate it. But Trump went a step further by extending the rule to restrict not only family planning funding but any form of global health funding.2 This action sent a clear signal on what was to come for reproductive rights in the US and beyond.

This signal was amplified by the appointment of two socially conservative justices, Neil Gorsuch and Brett Kavanaugh, to the Supreme Court. Empowered by a tipping of the balance of the court away from upholding abortion rights, state legislatures around the country have since enacted a spate of extreme abortion restrictions. In March 2019, Mississippi enacted legislation that would prohibit abortion once a fetal heartbeat can be detected, before most people even know they are pregnant.3 Ohio, Georgia, Louisiana, and others quickly followed suit, enacting almost identical bills.4 Most recently, in Alabama, the governor signed a law that would make it a crime for doctors to perform abortions at any stage of a pregnancy unless a woman’s life is threatened.5

These state laws are blatantly unconstitutional and will be the subjects of prolonged legal challenges. This is in fact their intent: to provoke the Supreme Court to revisit judicial precedence on abortion rights in the US, opening up the possibility of overturning the landmark 1973 ruling protecting women’s rights to abortion (Roe v Wade).

But at present, abortion is still a legally protected right in all 50 states. Moreover, although these new state laws have focused international attention on the US, provoking widespread outrage and condemnation, the greatest urgency around reproductive rights in the US is not about the legal right to an abortion but about the ability to obtain one.

In Alabama, Georgia, Mississippi, and many other states proposing draconian abortion laws, the ability of poor and marginalised people to exercise their right to choose is already in jeopardy. Abortion is often out of reach for women who lack financial and social resources, even without six week bans or the criminalisation of doctors. For the past decade, many states have been enacting damaging but less eye catching laws that have had a devastating cumulative effect.6

These laws have closed clinics––in some cases reducing the number of clinics in a state to just one.7 They have put the cost of an abortion in a clinic out of reach.8 They have also placed multiple obstacles in the way of people seeking abortion, including mandatory waiting periods, ultrasound examinations, and provision of false information.9 Women with the fewest resources may still have a constitutionally protected right to choose abortion, but it is a right they have little means of fulfilling. For many who are poor, discriminated against, lack social support, or live in rural areas, the post-Roe era is effectively already here.

In Texas, for example, access to abortion in a clinic for someone with few social and financial resources is strikingly similar to access for a person living in Northern Ireland. Abortion is legal in Texas and illegal in Northern Ireland, and yet the practical reality is the same: either find a way to travel to and pay for an abortion at a clinic or find a way to self manage an abortion outside the formal healthcare setting.

Self management with the abortion pill has emerged as a key international response to the current situation in the US. One not-for-profit telemedicine service has already been launched, providing early medical abortion by post to women in the US.1011 Demand for the service is increasing rapidly (fig 1), and it received roughly 21 000 requests in its first year. 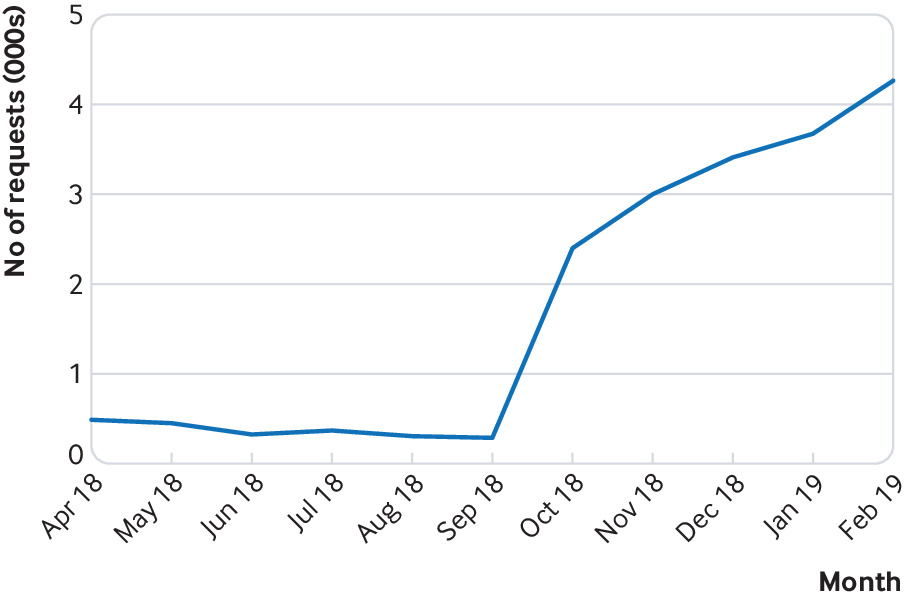 Monthly requests for abortion drugs from US residents to the Aid Access online telemedicine abortion service, April 2018-Feb 2019 (data from Project SANA at University of Texas at Austin)

Although online telemedicine fills a critical gap, it cannot reverse the current course of reproductive rights in the US. The Trump administration marches on, implementing new rules that will bar organisations affiliated with abortion providers from federal funding for contraception, cancer screening, and testing for sexually transmitted infections through the Title X programme, which provides services for uninsured people and those on low incomes.12

In a country where maternal mortality is already substantially higher than in other comparable countries,13 sexually transmitted infections are rising,14 and people of colour still face systematic discrimination within the healthcare and judicial systems15 the battle for full and equitable reproductive rights is now facing its biggest challenge in a generation.