The determinants of cognitive decline and dementia

The implications of cardiovascular health for dementia

Objectives To examine the association between the Life Simple 7 cardiovascular health score at age 50 and incidence of dementia.

Participants 7899 participants with data on the cardiovascular health score at age 50.

Conclusion Adherence to the Life Simple 7 ideal cardiovascular health recommendations in midlife was associated with a lower risk of dementia later in life.

Pathophysiological hallmarks of dementia appear 15-20 years before clinical symptoms,1 highlighting the need for a long follow-up to identify risk factors and protective factors. Guidelines for prevention of dementia recommend targeting midlife cardiovascular risk factors.23 Much of the evidence is on individual cardiovascular risk factors considered one at a time, although the importance of their clustering is increasingly recognised. In 2010 the American Heart Association (AHA) proposed the ideal cardiovascular health score, also referred to as Life’s Simple 7, composed of four behavioural and three biological metrics for primordial prevention of cardiovascular disease.4 People with higher cardiovascular health scores have a lower risk of cardiometabolic diseases, such as type 2 diabetes, coronary heart disease, and stroke, than do those with lower scores.56

The Whitehall II study is an ongoing cohort study of 10 308 people (6895 men and 3413 women, aged 35-55) recruited from the British civil service in 1985-88.14 Baseline assessment consisted of a questionnaire and a structured clinical evaluation composed of measures of anthropometric, cardiovascular, and metabolic risk factors and diseases. Subsequent follow-up clinical examinations have taken place approximately every four to five years (1991, 1997, 2002, 2007, 2012, and 2015), with each wave taking two years to complete. Written informed consent from participants was renewed at each contact.

Smoking status (current, past, never), physical activity (hours of moderate and vigorous physical activity per week), and diet (fruit and vegetable consumption, types of bread) were assessed using questionnaires. A trained nurse used standard protocols to collect data on body mass index (weight/height2 in kg/m2), fasting glucose concentration, blood cholesterol concentration, and blood pressure during the clinical examination. Blood pressure was taken as the mean of two measurements using a Hawksley random zero sphygmomanometer (1985, 1991, and 1997) and OMRON HEM 907 (2002) with the participant in a sitting position after five minutes of rest. Weight was measured in underwear to the nearest 0.1 kg on Soehnle electronic scales with digital readout (Leifheit, Nassau, Germany), and height was measured in bare feet to the nearest 1 mm by using a stadiometer with the participant standing erect with the head in the Frankfurt plane. Venous blood samples were taken after at least five hours of fasting, and serum obtained after centrifugation was refrigerated at 4°C and assayed within 72 hours of the blood draw. Total cholesterol was measured using a Cobas Fara centrifugal analyzer (Roche Diagnostics, Nutley, NJ).

We categorised all metrics into three levels (coded as poor=0, intermediate=1, and optimal=2), following the AHA’s recommendations,4 apart from smoking and diet, for which we adapted the categorisation to reflect data available in the study (table 1). For smoking, we split ex-smokers into optimal and intermediate levels depending on whether they had stopped smoking before or after the previous wave of data collection (corresponding to a four to five year gap, instead of one year). For the diet metric, we used information on consumption of fruit and vegetables and type of bread, as this information was available from all waves of data collection.

All residents in England, Scotland, and Wales have a unique National Health Service (NHS) identification number, which we used to link all participants to electronic health records. We used three registers (the national hospital episode statistics (HES) database, the Mental Health Services Data Set, and the mortality register) for ascertainment of dementia using ICD-10 (international classification of disease, 10th revision) codes F00-F03, F05.1, G30, and G31. Record linkage was available until 31 March 2017. The NHS provides most of the healthcare, including outpatient and inpatient care. The sensitivity of dementia in the HES data is 78.0%, and the specificity is 92.0%.15 In addition, we used the Mental Health Services Data Set, a national database containing information on dementia for people in contact with mental health services in hospitals, outpatient clinics, and the community. Cause specific mortality data came from the British national mortality register (National Health Services Central Registry). Date of dementia was set at the first record of diagnosis of dementia in any of the three databases used for ascertainment.

Association of cardiovascular health at age 50 with incidence of dementia

We ran the multi-state models by using the “mstate” package of R software. For all other analyses, we used Stata 15.1. We rejected the null hypothesis for two sided values of P<0.05.

Participants of the Whitehall II study were not involved in setting the research question or the outcome measures, nor were they involved in developing plans for recruitment, design, or implementation of the study. No participants were asked for advice on interpretation or writing up of results. However, all results are disseminated to study participants via newsletters and our website, which has a participant portal (https://www.ucl.ac.uk/epidemiology-health-care/research/epidemiology-and-public-health/research/whitehall-ii/participants-area). The dissemination plan targets a large audience, including members of the public, patients, and health professionals, and will be achieved through various channels, including media outreach via press release from the Inserm and University College London, networks, and social media. 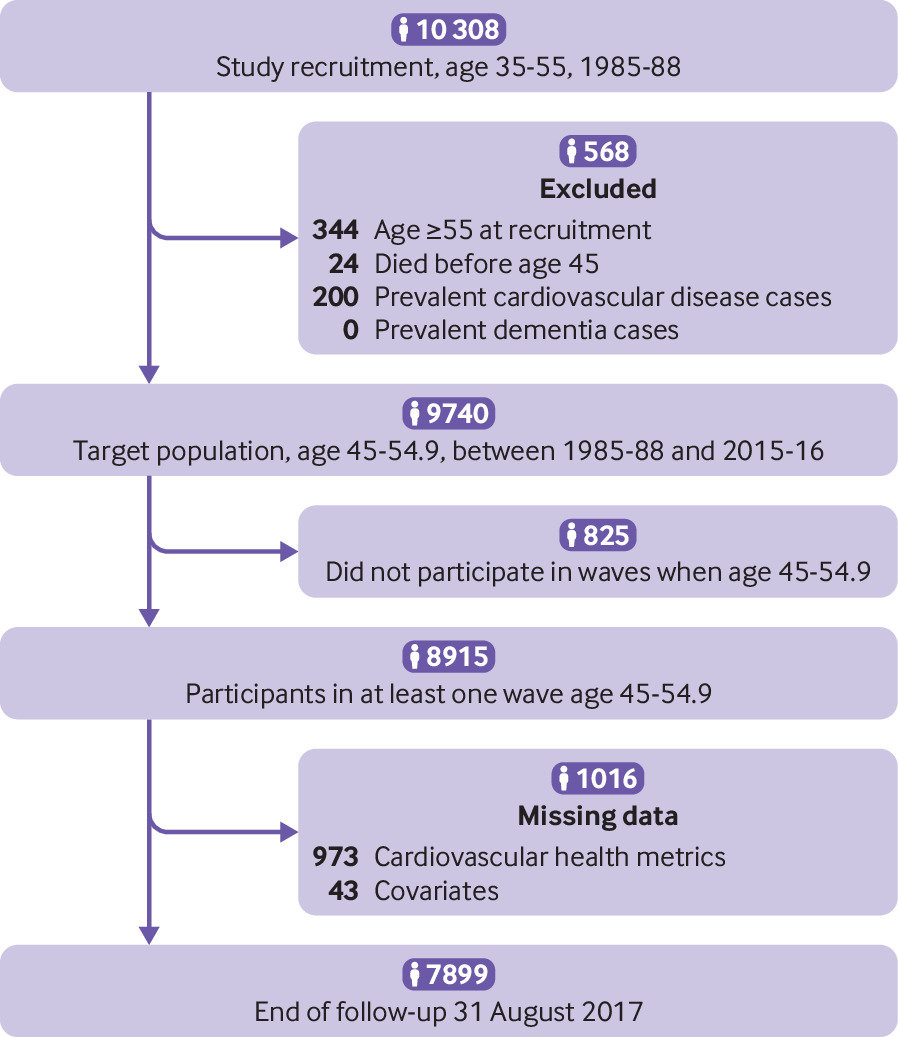 Among the 7899 study participants, a total of 347 cases of dementia were recorded over a median follow-up of 24.7 (interquartile range 19.1-29.3) years. Mean age at diagnosis of dementia was 75.3 (SD 5.3; interquartile range 72.3-79.4) years. Table 2 shows characteristics of the study sample at age 50. The proportion of women, non-white participants, and participants in the lower socioeconomic group was higher in the group of dementia cases compared with participants who did not develop dementia during follow-up. Participants with higher cardiovascular health score, denoting better health, were more likely to be male, white, married/cohabiting, and from the higher educational and occupational groups. Further distribution of the cardiovascular health metrics and by categories of the cardiovascular health score are shown in supplementary table A. 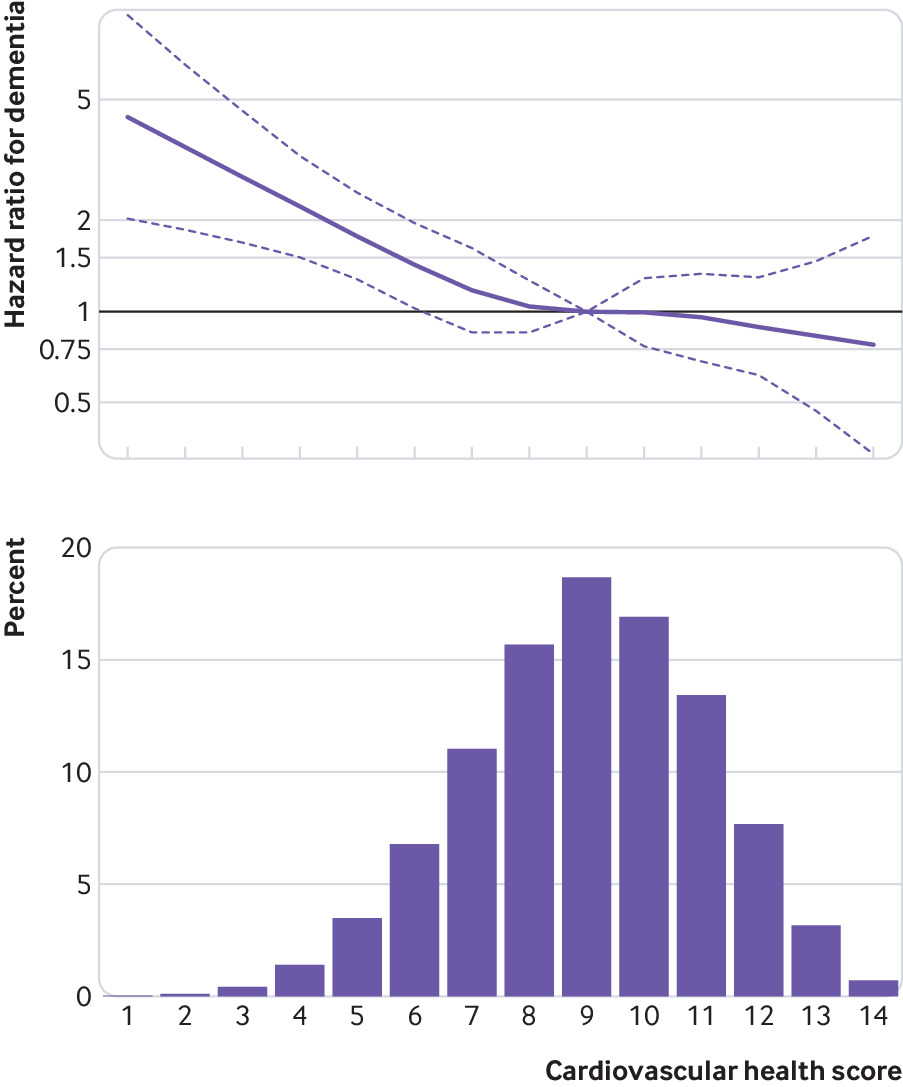 In an analysis using the seven cardiovascular health metrics at optimal levels, and adjusted for sociodemographic factors, the hazard ratio for dementia for each additional metric at optimal level was 0.88 (0.79 to 0.97). Both the behavioural and biological subscale scores were associated with incidence of dementia (hazard ratio per 1 point increment 0.87 (0.81 to 0.93) and 0.91 (0.83 to 1.00), respectively), and we found no evidence of an interaction between the two (P=0.32). On further analysis in 4996 participants with relevant data available, results remained similar after additional adjustment for apolipoprotein E ε4 (supplementary table B). 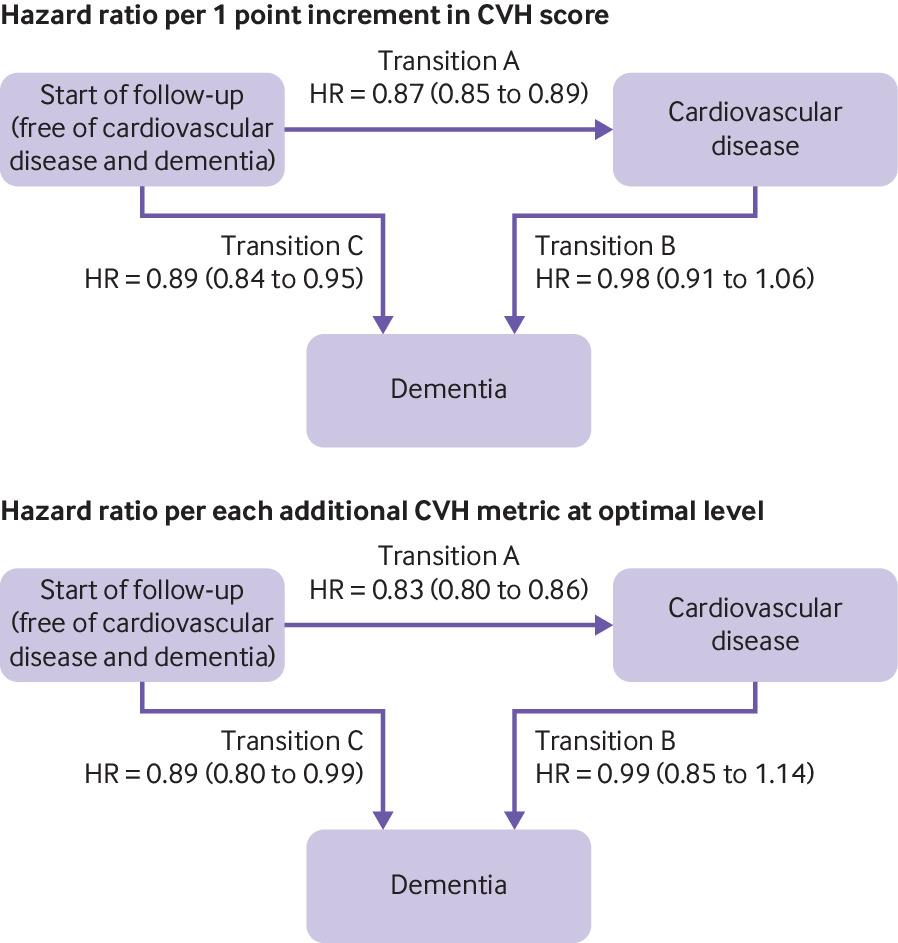 Multi-state models for role of cardiovascular health (CVH) score in transitions between start of follow-up, cardiovascular disease, and dementia. Top: hazard ratio (HR) per 1 point increment in CVH score. Bottom: HR per each additional CVH metric at optimal level (range 0-7). HRs and 95% CIs were estimated using inverse probability weighted multi-state models with age as timescale and adjusted for sex, ethnicity, education, occupational position, and marital status. No of cardiovascular disease (CVD; coronary heart disease or stroke) cases among healthy participants=1570/7899 (transition A); No of dementia cases among healthy participants=222/7899 (transition B); No of dementia cases among participants with CVD over follow-up=125/1570 (transition C)

We assessed cardiovascular health close to age 50 (mean age 50.4 (SD 2.3) years, age range 45-55). Much of the previous evidence on “midlife” risk factors has used a wide age range, sometimes as large as 20 years, from a baseline assessment to draw conclusions on the importance of midlife factors. This is particularly problematic for research on dementia, as risk factor levels change during the long preclinical period of dementia,1 which can lead to findings that are affected by reverse causation.121322 Key strengths of this study include use of a study design that allowed us to assess cardiovascular health metrics at age 50, a long follow-up for incidence of dementia, the use of multiple statistical methods to control for bias and confounding,21 and inclusion of data from the Whitehall II magnetic resonance imaging substudy.

A key limitation, as in any observational study, is the self reported measure of behavioural factors and drug use. The Whitehall II study is an occupational cohort at recruitment, and participants are healthier than the general population in terms of risk factors levels and incidence of disease. However, this does not necessarily affect risk factor-disease associations.23 For example, the association between cardiovascular risk factors and incidence of cardiovascular disease in the Whitehall II study is similar to that in general population studies.24

Use of linkage to electronic health records for ascertainment of dementia may not be the “gold standard” method but has the advantage of allowing analysis on everyone recruited to the study rather than only those who continue to participate over the course of the study and are available for an in-person clinical ascertainment of dementia. In the UK, HES records on dementia have been shown to have high specificity but modest sensitivity (78%) due to missing of milder cases of dementia,15 as also reported in the Mayo Clinic Study of Ageing and the Adult Changes study.25 We additionally used the UK mental health database to improve the sensitivity of dementia diagnosis.26

Few previous studies have examined the association between cardiovascular health and cognitive outcomes, and most were based on older adults who were followed for cognitive outcomes for less than 10 years. These studies reported better cardiovascular health to be associated with lower risk of cognitive impairment,27 cognitive decline,89 and dementia.810 In the Atherosclerosis Risk in Community (ARIC) cohort, higher cardiovascular health scores assessed at mean age 54 (SD 6) years were associated with slower cognitive decline over a 20 year follow-up period.28 In participants from the Framingham Heart Study Offspring cohort, the association with risk of dementia was observed when risk factors were assessed at a mean age of 62 (SD 6) years but not when assessed at a mean age of 69 (6) years.10 In a study on people with a mean age of 67 (8) years at cardiovascular health assessment, no association was found with incidence of dementia over a seven year mean follow-up.11 One explanation for this inconsistency is that studies that assess risk factors at older ages are more likely to be affected by reverse causation bias than are those with this assessment in midlife, a possible explanation for null findings in recent studies on cardiovascular health and dementia.1011 Evidence shows that the associations of body mass index, blood pressure, and cholesterol with dementia are attenuated or even reversed at older ages.111213293031

Few studies, mostly cross sectional, have examined the association between cardiovascular health and brain imaging.10263233 Cardiovascular health has been shown to be associated with whole brain volume,1032 although findings on specific markers are less consistent.10263233 White matter hyperintensities, particularly in the deep white matter, are usually interpreted as “microvascular changes” that are associated with vascular risk in general.34 We found no association with cardiovascular health, which is consistent with some but not all previous studies.10323335 The large heterogeneity in population settings (mean age ranged from young adulthood to older age), as well as the type of brain imaging analysis, might explain inconsistent findings. Further investigations are thus needed to confirm specific brain correlates of cardiovascular health.

Prevention is an important element in tackling the challenge posed by the expected tripling of dementia cases by 2050. Our findings suggest that the Life’s Simple 7, which comprises the cardiovascular health score, at age 50 may shape the risk of dementia in a synergistic manner. Cardiovascular risk factors are modifiable, making them strategically important prevention targets. This study supports public health policies to improve cardiovascular health as early as age 50 to promote cognitive health.

We thank all of the participating civil service departments and their welfare, personnel, and establishment officers and all members of the Whitehall II study teams at UCL and Oxford who have been instrumental to the data collection.