Oesophageal cancer is currently the sixth commonest source of cancer-associated death across the world: 572 034 new cases and 508 585 mortalities were reported in 2018.1 Global disease incidence has increased significantly in the past four decades.23 Recent data from the World Health Organization suggest that age-standardised incidence is higher across eastern Asia than any other region, but the UK continues to harbour the highest incidence among individual countries.1 In this review, “oesophageal cancer” refers to adenocarcinoma of the oesophagus and that of the gastro-oesophageal junction, because their pathophysiological and clinical similarities allow them to be staged and managed as similar entities (gastric cancer is staged differently).4

Over the past decade, the increased uptake of early referral schemes across the UK, North America, and Western Europe has improved detection of early stage, curable disease.567 Coupled with novel endoscopic therapies and perioperative treatment strategies, overall survival rates have also improved.8

This review aims to guide generalists through the referral and early diagnosis processes of oesophageal cancer, as well as highlighting risk and current preventive strategies.

What is oesophageal cancer?

Oesophageal cancer refers to tumours originating from the oesophageal mucosa that may progress locally to involve the underlying submucosa and muscular layer, eventually invading adjacent structures such as the tracheobronchial tree, recurrent laryngeal nerve, thoracic aorta, or diaphragm (fig 1).

Layers of the oesophageal wall and tumour stage progression

Adenocarcinoma and squamous cell carcinoma account for over 95% of all cases of oesophageal cancer worldwide.9 The remaining cases can be attributed to histological subtypes such as small cell carcinoma, sarcoma, lymphoma, melanoma, and choriocarcinoma, but these are rarely encountered, even in tertiary centres.10

Squamous cell carcinoma of the oesophagus—which is often associated with alcohol and tobacco consumption, and primarily affects the upper and middle oesophagus—was the more common oesophageal cancer in the 1960s. However, the rise in gastro-oesophageal reflux disease (GORD) and Barrett’s oesophagus in otherwise healthy young men across the developed world has contributed to oesophageal adenocarcinoma now being the more common subtype throughout Western Europe and North America.2111213

Cancers of the lower oesophagus and gastro-oesophageal junction are typically adenocarcinoma, and are often associated with GORD, Barrett’s oesophagus, high body mass index, and male sex.

Metastasis of both subtypes of cancer typically occurs to the peri-oesophageal lymph nodes, liver, and lungs.

Most risk factors apply to all forms of oesophageal cancer, but some are specific to certain subtypes.

Oesophageal cancer incidence rises sharply beyond the age of 45 years, with the highest global incidence in those aged over 85 years (fig 2).1 More than 85% of cases involve people aged over 55 years.15 In the UK 41% of cases diagnosed affect patients aged 75 years and over.16 The incidence in men peaks between 85 and 89 years, while in women it peaks after 90 years.14 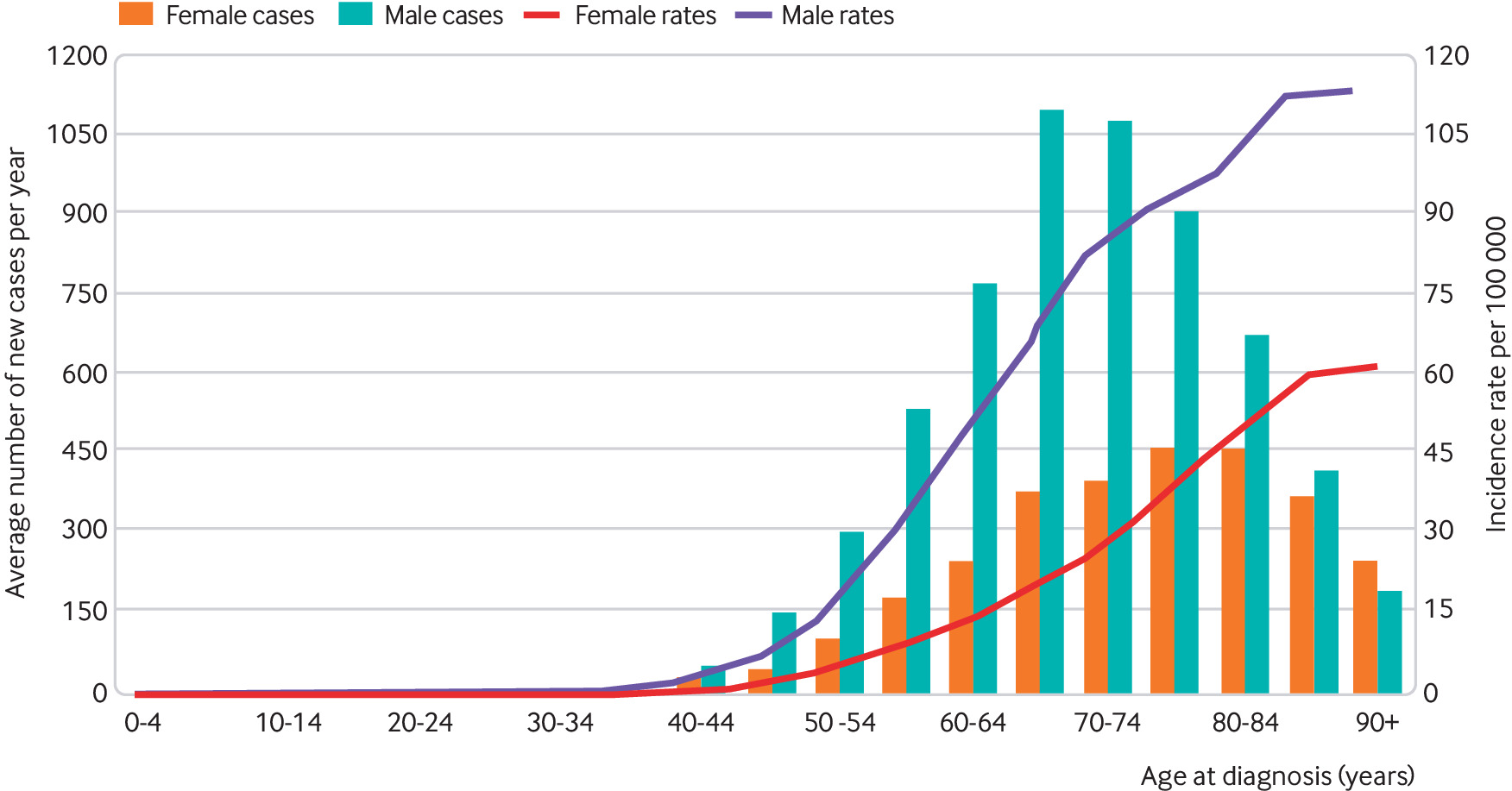 A case-control study involving 1428 patients in Sweden suggested that there is a relation between severity, symptom length, and frequency of reflux symptoms and the risk of oesophageal adenocarcinoma (odds ratio 43.5 (95% confidence interval 18.3 to 103.5)).17

A population based study involving 11 028 patients with Barrett’s oesophagus in Denmark revealed an incidence of 1.2 cases per 1000 person-years (95% CI 0.9 to 1.5) and concluded that people with Barrett’s oesophagus had a relative risk of developing adenocarcinoma of 11.3 (95% CI 8.8 to 14.4), and carried a risk of 0.12% per year (0.09% to 0.15%).18 A cross-sectional analysis of 234 patients in North America revealed that inactivation of certain genes (such as p16, RUNX3, and HPP1) may be associated with the progression of Barrett’s oesophagus to dysplasia or cancer.19

Similarly, a case-control study in Sweden found that people with BMI >30 were significantly more likely (odds ratio 16.2 (6.3 to 41.4)) to develop oesophageal adenocarcinoma than people with BMI <22.26

Estimated global incidence (age-standardised, per 100 000) of oesophageal cancer in men in 201828

A global epidemiological review of 47 multi-modality studies suggested that increased consumption of vegetables and fruit by 50 g per day reduced oesophageal cancer risk by about a fifth.29

A case-control study of 1838 participants across multiple North American institutions suggested that frequent intake of vegetables, especially cruciferous, and yellow/green vegetables, may protect against developing oesophageal cancer.30 The study also found that low fruit and vegetable intake (<2 servings daily, excluding fruit juices, salads, and potatoes) occurred in 28.7% (95% CI 11.1% to 56.5%) of the cases of oesophageal squamous cell carcinoma and 15.3% (5.8% to 34.6%) of the adenocarcinomas.30

While the above points suggest that dietary fruit and vegetables contribute to reducing oesophageal malignancy risk, it is unclear whether this is due to antioxidant properties: a Cochrane review identifying 20 randomised trials (n=211 818) did not establish a definite preventive link between antioxidant supplements and gastrointestinal cancer.31

A prospective US study involving 474 606 participants found that smoking tobacco carried a considerably greater risk of developing oesophageal squamous cell carcinoma (hazard ratio 9.27 (95% CI 4.04 to 21.29)) and adenocarcinoma (hazard ratio 3.70 (2.20 to 6.22)).33 The same study reported that drinking more than three alcoholic drinks (one drink defined as “one 12-fluid ounce beer, one 5-fluid ounce glass of wine, or one 1.5-ounce shot of liquor” (each about 13 g of alcohol)) daily significantly increases the risk of oesophageal squamous cell carcinoma (hazard ratio 4.93 (2.69 to 9.03)) compared with consuming up to one alcoholic drink daily. No similar increase in risk was observed for oesophageal adenocarcinoma.33

Numerous cohort studies adjusted for tobacco use have revealed a twofold to sevenfold increase in oesophageal cancer risk in regular alcohol drinkers—defined as consuming an alcoholic drink (360 g of beer (12.6 g ethanol), 103 g of wine (12.5 g ethanol) or 30 g of spirit (12.9 g ethanol)) at least once a week, for ≥six months—compared with average population risk.2935

The synergistic effect of smoking and excessive alcohol intake has also been demonstrated. An analysis of five case-control studies involving 2609 participants found that the combination of alcohol consumption >249 mL of ethanol daily and black-tobacco smoking significantly increased the risk of developing oesophageal cancer (odds ratio 106.89 (95% CI 44.91 to 254.41)).36

Tumour location, tumour stage, and histological subtype can all affect mode of presentation. Because of the distensibility of the oesophageal wall and its ability to accommodate the passage of ingested food boluses, patients with early oesophageal cancers (stages 0 to II) may not experience noticeable symptoms.15 Over half of all individuals with oesophageal cancer present with late disease (stages III and IV)—the most common presenting symptoms at this stage are dysphagia and odynophagia.38

Patients with locally-advanced upper oesophageal tumours (typically squamous cell carcinoma) may also present with voice hoarseness due to tumour compression of the recurrent laryngeal nerve, while those with phrenic nerve involvement may present with hiccups. Paroxysmal or postprandial cough may indicate the presence of an oesophago-bronchial or oesophago-tracheal fistula secondary to locally advanced tumour invasion.

Consider the differential diagnoses listed in table 1 in any patient presenting with reflux, dysphagia, dyspepsia, or regurgitation. However, it is important that all patients who meet the National Institute for Health and Care Excellence (NICE) referral criteria for suspected oesophageal cancer (box 1) are referred for upper gastrointestinal endoscopy (gastroscopy).

For direct access gastroscopy to be performed within 2 weeks

Oesophageal cancer is initially diagnosed by gastroscopy with biopsy of suspicious tissue.

Offer referral for gastroscopy to symptomatic patients with risk factors.6 Box 1 summarises the 2015 NICE guidelines for the referral of suspected oesophageal cancer.

Also consider referring symptomatic patients who do not meet these criteria for specialist opinion. Specialists will consider the investigations in box 2 to further characterise endoscopically diagnosed oesophageal cancer.

There are several hypotheses that certain pharmacological agents can help prevent the development of oesophageal cancer:

A meta-analysis published in 2003 involving 1813 oesophageal cancer patients suggested that the use of aspirin and non-steroidal anti-inflammatory drugs (NSAIDs) reduced oesophageal cancer risk (odds ratio 0.57 (95% CI 0.47 to 0.71)).46 More recently, a case-control study published in 2015 involving 637 participants supported this finding, suggesting that regular aspirin or NSAID use reduced the risk of Barrett’s oesophagus (odds ratio 0.53 (0.35 to 0.81)).47

British Society of Gastroenterology guidance advises that screening for oesophageal cancer is indicated for Barrett’s oesophagus to recognise premalignant lesions and early cancers.20 The guidance also states that that endoscopic screening is not justified for reflux symptoms in the general population because of the relatively low incidence of oesophageal cancer in relation to the high prevalence of reflux disease overall.20 North America’s National Cancer Institute guidelines support this: they state that endoscopic screening of reflux in the general population would result in negligible mortality reduction from oesophageal cancer, with undue morbidity conferred from endoscopy related risk.50

However, non-invasive general population screening for oesophageal cancer is being considered. The multicentre BEST2 trial, published in 2017, evaluated the use of an ingestible oesophageal sampling device—the Cytosponge—potentially obviating the need for endoscopic assessment in low risk patients with Barrett’s oesophagus.4751

How this article was created

We surveyed five patients who had been successfully treated for oesophageal cancer at our centres and were undergoing routine outpatient surveillance. Their key concerns were about lesser known risk factors (such as obesity and male sex) and delayed presentation. We emphasised these aspects in the article to raise awareness among generalists.

This paper was also reviewed by a bowel cancer patient, who highlighted how receiving a diagnosis of cancer is devastating. She also highlighted the need for sensitivity, empathy, and good judgment when clinicians communicate with patients about their diagnosis and management. These important points have been included in the manuscript.

Free resources for patients (and their families and carers)

We acknowledge the work of Sharon Kunihira and Isha Thomas, whose passionate support for both patients and colleagues will forever be cherished.

See other articles in issue 8209