Public hospitals in China (tertiary and secondary hospitals) have strong incentives to make a profit from drug sales and high value medical consumables, and this has become a target for change over the past decade.1 Since 2009, China has been piloting public hospital reforms to reduce these incentives, as part of an overall reform of the health system.2Several initiatives have been undertaken, focusing on governance and management structures, compensation mechanisms, and provider payment methods.3 While these reforms have made some progress, the challenges of increasing medical expenditure and a heavy reliance on drug sales have not been adequately dealt with; nor has the profit driven behaviour of the public hospitals been sufficiently reversed.34 Patients continue to bypass primary healthcare to seek expensive secondary and tertiary healthcare, even for conditions that are not serious.5

What was proposed in the Beijing public hospital reform?

Beijing has a large population of 21.7 million, and in 2017 the gross domestic product per capita was ¥128 927 (£14 785; $18 662; €16 760), ranking first in China. It has 116 tertiary hospitals, more than any other city in China. Public hospitals in Beijing play a more dominant part in providing medical services than in other regions of China. Among all outpatient visits in Beijing in 2016, 63% were at public hospitals and only 27.1% were in primary healthcare settings, much lower than the national average of 55.1%. In 2016, more than 45.1% of revenues in tertiary public hospitals in Beijing were from drug sales, while the national average was 38.9%.6

The Beijing municipal government started a comprehensive public hospital reform in April 2017 (see table 1 for details) aimed at promoting use of primary healthcare services, containing the escalating medical expenditure, and reducing the proportion of revenues from drug sales to rebuild an appropriate compensation mechanism for public hospitals.7 Dual leadership of the National Health Commission and Beijing municipal government was set up to coordinate the policy development and implementation process. The Beijing Health Commission acted as the implementation organisation to coordinate with other sectors, including departments of finance, civil affairs, and social security.

The reform focused on price adjustment of drugs and medical services. Based on national guidelines, the 15% mark-up from drug sales was removed in all public hospitals to reduce reliance of public hospitals on profits from drug sales. Prices of 435 medical service items were adjusted to guide health professionals’ service provision behaviour, with increased prices for surgical operations and traditional Chinese medicine services and decreased prices for medical investigations (for example, computed tomography (CT) and magnetic resonance imaging (MRI)). In addition, the Beijing reform set up innovative medical consultation service fees to better compensate public hospitals’ financial loss from the zero mark-up policy for drugs and to better reflect doctors’ professional values.

The reform design was based on experiences from a pilot reform in five public hospitals starting in 2012.8 Potential financial gains and losses at public hospitals were estimated to inform the design of price adjustment.

What has been achieved since the reform began?

Results on flow of outpatients and length of stay of inpatients

The potential revenue loss from drug mark-up pushed public hospitals to improve their efficiency in use of resources and service provision. As a result, the average length of stay for inpatient services fell from 8.9 days to 8.3 days in tertiary hospitals and from 10.0 days to 8.8 days in secondary hospitals.

The reform led to a slowed rate of growth for medical expenditure and a changed structure of public hospitals’ revenues.10 The annual growth of total health expenditure fell from 6.94% before the reform to 4.73% afterwards.6 In tertiary hospitals the proportion of drug sales in total hospital revenues fell from 45.14% to 36.98%; in primary healthcare facilities, the proportion decreased by 2.79% (table 2).

The reduction in the proportion of drug revenues in total service revenues was due mainly to removal of the 15% drug mark-up. This may help reverse the longstanding distorted incentive towards drug sales in public hospitals. For most hospitals, loss of revenues from the drug zero mark-up policy can be compensated for by adjusting the service consultation fee, among other price adjustments.10

What should be done now to further progress?

Beijing has made a huge step towards containing medical expenditure through the public hospital reform. While these experiences are useful for other parts of China and other countries with similar systems, Beijing needs further efforts to consolidate its health system reforms.

The decreased price of CT and MRI scans aimed to reduce the reliance of public hospitals on revenues generated from these expensive medical investigations. However, profit driven behaviour of public hospitals cannot be fully dealt with overnight. Public hospitals may shift costs from medicines to other high value medical consumables or clinical processes.12 A 35.7% increase in MRI in tertiary hospitals and a 41.47% increase in secondary hospitals was noted after the reform (fig 2). This may be because hospitals are trying to increase their CT and MRI service volumes to compensate for the financial loss due to the price reduction.9 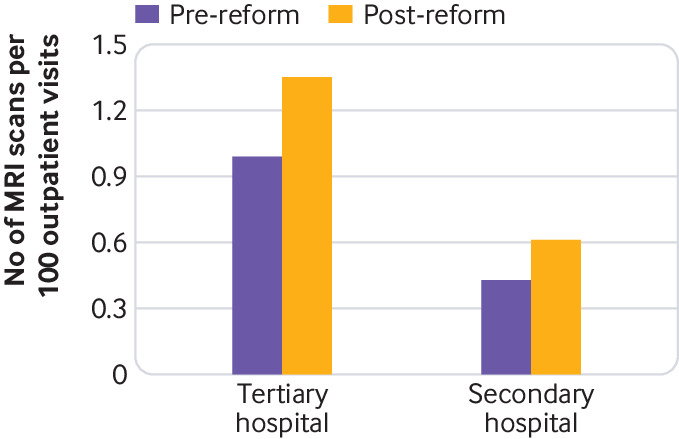 To overcome this unintended consequence, health authorities and health insurance agencies should strengthen regulations to reduce unnecessary use of these high cost medical investigations and consumables. Price adjustment of more service items and provider payment reform should be implemented to further reduce the profit driven behaviour of public hospitals and health workers.

Primary healthcare facilities need to strengthen their capacity to provide good quality health services to accommodate the increasing workloads after the reform. This includes improving quantity and quality of human resources, financial and non-financial incentives, and other quality assurance mechanisms.5

Monitoring and evaluation on quality of care and health outcome

The Beijing reform has closely monitored key indicators from a sample of public hospitals each day since the policy implementation. A research team from Peking University led an independent evaluation on the policy process and results. The monitoring and evaluation activities are helpful in drawing lessons learnt from the reform. However, these activities mainly focus on service utilisation and medical expenditure. The achievement of the reform on cost containment and more use of primary healthcare services should not be at the expense of service quality and health outcomes. Long term monitoring and evaluation activities should be conducted to evaluate the impact of the reform on quality of care and health outcomes.

The Beijing reform of public hospitals used price adjustment to contain the rise in medical expenditure. It achieved its objectives mainly through encouraging patients with mild illnesses to use primary healthcare services rather than tertiary hospitals. Alignment of incentives among different stakeholders including public hospitals, health workers, and patients have been the key drivers of these changes. As China is yet to develop a gate keeping system, as is found in most developed countries, the reform in Beijing helps set a pioneering example of using pricing reform in public hospitals to contain rising medical costs and promote the establishment of a tiered service delivery system.