Recent figures highlight the rising global burden of non-communicable diseases (NCDs),1 and tackling this problem requires global coordinated action. Behavioural risk factors for NCDs at both individual and population level are increasingly recognised to be influenced by multiple factors interacting across multiple sectors.234 No single organisation or sector can therefore solve the problem alone.5 It requires multipronged action across various sectors. The myriad political, economic, environmental, interpersonal, and individual factors are inter-related through a complex and often non-linear feedback process and interactions that give rise to an adaptable system that can be modelled.

The global action plan for reducing NCDs published by the World Health Organization outlines “best buys” for tackling key risk factors such as tobacco use, physical inactivity, the harmful use of alcohol, and unhealthy diets. The plan provides policy makers with a menu of policy options to reduce NCDs5 and recommends multisectoral action engaging all of government as well as academia, non-governmental organisations, philanthropies, and the private sector. Stakeholders encompass different levels of governance, including national, subnational, and municipal councils. Thus, the engagement of the whole of government and whole of society is necessary to support countries to reduce NCDs.

Action on NCDs needs to come not only from the health sector but also organisations and agencies that operate outside the traditional sphere of health, such as non-profits, schools, businesses, and other governmental agencies, including transport, planning, and education. Therefore, building national action plans requires the development and implementation of cross-sectoral and multistakeholder networks that can provide a synergistic, concerted, and coherent approach to prevention of these diseases and their risk factors.

A major challenge is how these diverse organisations, agencies, and groups can develop meaningful partnerships to tackle shared goals in population health. Traditionally, organisations are used to working within single sectors rather than across them,6 and there is little guidance on how best to effectively develop, manage, and maintain a national stakeholder network. A systems approach can also be useful within organisations, providing a better appreciation of how organisations are structured and highlighting the tendencies to operate in silos. A shift in culture to a network approach could therefore have wider benefits.

Conceptualising multisectoral partnerships as networks (fig 1) allows use of stakeholder network analysis techniques and network theories to determine how they can be more effective in reducing NCDs.7 Stakeholder network analyses can help clarify which organisations are connected to each other and how. They can also measure the quality of these connections, with the resulting data used to strengthen ties. 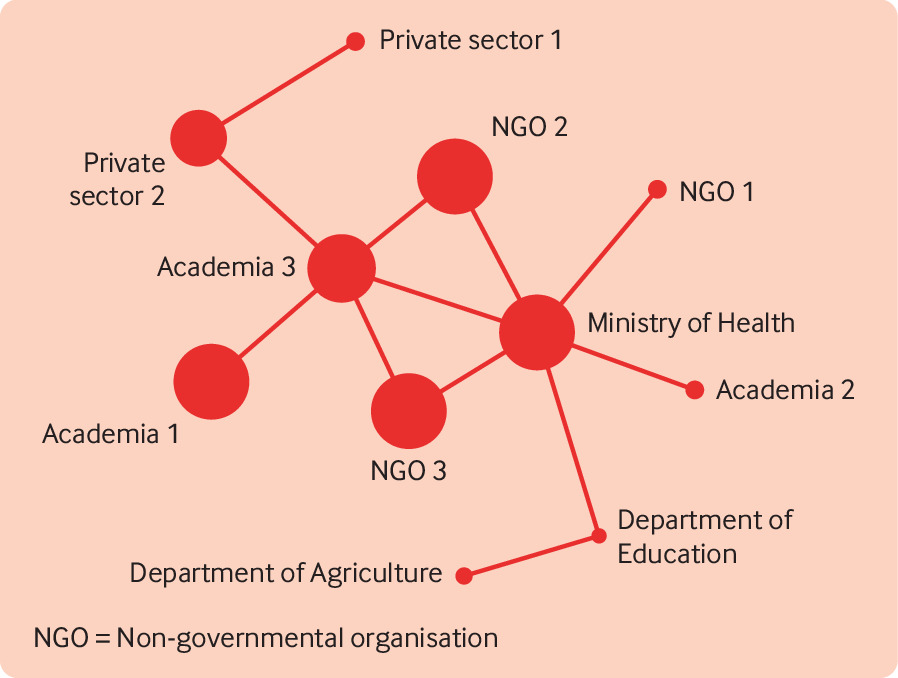 Stakeholder analyses can identify the organisations involved in implementing interventions for prevention and control of NCDs and how they are linked; describe the structure and characteristics of the network—how its participants communicate with each other and how influential they are; and identify areas and strategies to strengthen the participation of key stakeholders. A visual representation of the network helps members to better understand the network and identify priorities to make the network more robust and collaborative—for example, by establishing relationships between stakeholders that are disconnected, identifying areas where new stakeholders need to be recruited, and facilitating sharing of resources and knowledge. Understanding how a stakeholder network is organised can empower and promote self management among the network members.

Varda et al outlined the core dimensions of connectivity in public health collaboratives.6 These include factors such as membership (name, type, and characteristics such as size); network interaction (key players, patterns, and positions occupied); the role of the Ministry of Health (such as convenor, facilitator, or equal member); the frequency of interactions; and issues of power, involvement, resources, trust, and reciprocity. An understanding of these factors could help increase efficiency, effectiveness, and sustainability of stakeholder networks.8910 It increases the likelihood that goals will be met because tasks and efforts are shared and policies and programmes are optimised.

However, such high level networks risk burnout as often there is little funding or resources to support the work; overuse, especially as some individuals are commonly involved in several high level networks; and collaborative failure. Furthermore, once networks are set up they can be difficult to sustain over the longer term, particularly in a dynamic setting where people regularly change job roles or organisations and agendas change to adapt to the most urgent priorities.

The sustainability of any efforts to support implementation of interventions for NCDs at both individual and organisational levels will depend on the strength and empowerment of the interorganisational networks. An assessment of the processes that facilitate or inhibit the effective implementation of national NCD action plans will form an integral part of this programme of work. This can be done using methods that draw from complexity science,11 including established stakeholder network analysis tools and techniques.7

For example, the strength and extent of network ties between the stakeholders—in terms of reciprocal relationships, trust, exchange of information, and technical assistance—can be evaluated using mathematical parameters describing the network (box 1).7 These include the network density (the proportion of possible ties in a network that actually exist), the number of ties to and from a stakeholder (degree, used to determine opinion leaders), and the frequency with which certain organisations or individuals connect others in the network (betweenness). The quality of ties can be measured and actions identified to improve them, increasing efficiency and reducing redundancy. Clustering coefficients and community detection algorithms, which assess the density of connections between organisations, can be used to identify important subnetworks—for example, those focused on specific NCD priorities.

Stakeholder network analysis provides a means to study microstructural and macrostructural changes that affect the sustainability of the implementation. The hierarchical transformation of networks through the formation of cliques or communities among stakeholders can shed light on the dynamic and emergent nature of the relationships. Using network science and qualitative inquiry1213 to investigate how the nature, roles, and relationships between stakeholders evolve and affect the implementation of NCD prevention and management plans can provide information to strengthen the implementation of national action plans. Activities such as multisectoral stakeholder meetings and communities of practice could also be enhanced through network approaches. For example, communities of practice—groups of people with a common goal working and learning together—can use network approaches to share resources more efficiently, such as new funding opportunities for NCD control, and diffuse information effectively throughout the network.

Network theories can provide a unique perspective into how to improve collaborative efforts regarding NCD prevention and control. For example, the concept of homophily suggests that organisations with similar characteristics will tend to collaborate together and form strong ties.7 However, diversity in ties is important for introducing new knowledge and spreading new behaviours through a network. Granovetter’s strength of weak ties theory14 argues that indirect and weak ties (eg, acquaintances) are usually unconnected to the rest of an organisation’s network and therefore more likely to introduce new information or behaviour. In contrast, when ties are highly clustered (ie, people in an organisation’s network are close contacts) their information is already known to the organisation. This theory suggests that having many stakeholders is not necessarily better. Organisations need to cultivate weak ties and maintain a diverse set of contacts to be able to access resources and information critical to survival and success.

Burt developed this theory further when he noted that weak ties spanned “structural holes” (a gap between individuals or organisations in the network who have similar sources of information or similar positional advantages or disadvantages) in the network.1516 He suggested that organisations or individuals who occupy structural holes hold critical positions in the network that enable them to be more efficient and effective in diffusing information. This supports the idea that “less is more,” whereby fewer connections to several groups provide greater opportunity for sharing of information, resources, and innovation. For example, an individual or organisation acting as a mediator or bridge between two or more closely connected groups will be well placed to transfer or act as gatekeeper of information, knowledge, or resources between groups. Ministries of health often have the role of gatekeeper in NCD prevention and control as they are usually a central, well connected member of such networks.

Better understanding of the structure, characteristics, and function of stakeholder networks has led to novel interventions to improve their efficiency and effectiveness. Data captured using network analysis techniques can be used to accelerate and improve stakeholder network performance. A landmark paper by Valente in 2012 set out a taxonomy of network intervention approaches.18 Two approaches could be relevant to NCD specific stakeholder networks. Interventions can engage “individuals” who are selected on the basis of some network property and who may have greater roles in providing information or support within their network. For example, there are many mathematical algorithms available to identify central nodes (organisations) in the network. Nodes identified as having the highest “centrality betweenness”—being the shortest connection between other organisations—typically occupy critical gatekeeping positions and would have an important role in sharing information on NCD programmes across fragmented networks, thereby improving efficiency of implementation.

The second approach is known as segmentation and considers networks to have core members with dense connections and periphery members with looser connections.19 Valente suggests that the core members are key to mobilising networks, for example, to advocate for change, and to share information and resources.18 Public health partnerships are often composed of many organisations and individuals, but the core working group may be fewer than 15 organisations. Stakeholder network analyses can help understand who is part of the core and can therefore help with equal distribution of resources.

Global and national prevention and management of NCDs requires effective multisectoral partnerships. Such partnerships could benefit from using network science approaches. For example, network functions such as advocating for resources could be enhanced by using network science approaches to identify the key factors for achieving change in population behaviour. To advocate for better green infrastructure to promote physical activity, for example, requires a range of actors, such as government departments of planning, health, and finance, alongside urban planners, local NGOs, and local authorities,

Stakeholder network analysis techniques can help us better understand multistakeholder networks. The data can be used to inform the development of networks to tackle NCDs and improve their efficiency, effectiveness, and sustainability. However, such approaches must account for the dynamic context of these networks, with members, aims, and objectives changing as the work develops.2122 Understanding the structure of the network can empower its members and foster self management, facilitating the identification of ways in which new relationships may have greater impact. Changing how we prepare for and deal with network management could improve the quality, robustness, and sustainability of policies and initiatives.