Lung cancer is one of the commonest cancers worldwide.1 Outcomes are among the poorest of all tumour types, with five year survival of 10-20%.2 Survival is hugely influenced by stage at diagnosis, with five year survival varying from 92% to 0% for the earliest and latest stages respectively.3 In this update we discuss contemporary therapeutic options, and approaches to increasing symptom awareness and early diagnosis. Low-dose computed tomography (CT) screening is beyond the scope of this review.

In addition to searching Clinical Evidence and the Cochrane Collaboration, we based this article on databases of references. We also examined the citation lists of included articles.

Worldwide, about three quarters of lung cancers are attributable to smoking; others are caused by occupational workplace exposure, radon exposure, and air pollution.4 It is more common in men, and incidence increases with age (fig 1). Recent evidence suggests a changing pattern of lung cancer with higher incidence in younger and non-smoking women, especially in Asia and countries with Asian migrant populations.5 As smoking rates decline in some countries, there will be a fall in incidence, but this will be in decades to come. The most effective intervention for reducing lung cancer mortality remains smoking cessation; hence better interventions to reduce smoking are imperative. Radon remediation in certain areas may also be of benefit.

Incidence of lung cancer per 100 000 population by age and sex in UK 2013-15 (adapted from Cancer Research UK. Lung cancer incidence by age. 2017. https://www.cancerresearchuk.org/health-professional/cancer-statistics/statistics-by-cancer-type/lung-cancer/incidence#heading-One)

How can we improve symptom awareness in people at risk?

Several studies have explored symptom appraisal and help-seeking in people with recently diagnosed lung cancer. Factors associated with later presentation include limited awareness of cancer symptoms and fear of cancer,6 concerns about wasting their own and general practitioners’ time,7 and stoicism and stigma around smoking.8

Mass-media campaigns for symptom awareness are one approach to reducing the time that patients take to seek help about symptoms. Evidence from the “Be Clear on Cancer” campaigns in England reported potentially useful short term effects, including increased presentations to general practice and a higher proportion of earlier stage cancers 9; similarly, a significant shift to earlier cancer stage at presentation was seen after a local symptom awareness campaign.10 A trial of a cancer symptom awareness campaign, including lung cancer, in rural Western Australia did not reduce time to diagnosis, although this may have been due to the absence of television advertising.11 There is recent evidence suggesting that early awareness campaigns have the potential to be cost-effective.12 Social media may also have a role in raising awareness.

An alternative to mass-media campaigns is to focus symptom awareness interventions on individuals at increased risk. A behavioural intervention aimed at reducing barriers to help-seeking in current or former heavy smokers over 55 years old reported a significant positive impact on consultation rates in Scotland,13 and an increase in respiratory consultations in Australia.14

How should primary care clinicians respond to patients with symptoms?

For England and Wales, the National Institute for Health and Care Excellence (NICE) provides guidance on the criteria that warrant urgent action.15 For example, referral is recommended for unexplained haemoptysis in people aged over 40 years, and urgent chest x ray is recommended in smokers with appetite loss or with thrombocytosis. However, the presentation of symptoms is often complex, as many people will have comorbidities,16 and there is often no clear symptom signature.17

Only half of patients will have an isolated first symptom, and, although haemoptysis is the most predictive symptom, it occurs in only 20% patients.18 Many patients present with non-respiratory symptoms. Hence prompt recognition of patients who do not fulfil NICE criteria depends on clinicians having a low threshold for requesting a chest x ray, and a low threshold for repeating or requesting further lung imaging if patients have a normal chest x ray and ongoing symptoms. Some national guidelines suggest computed tomography in the case of persistent symptoms despite a normal chest x ray.19 Several risk prediction tools have been developed for use in primary care, but there is insufficient evidence to recommend their use.20

The prospect of biomarkers to identify people with early disease is of considerable interest. This includes novel technologies to detect volatile organic compounds in the breath and blood biomarkers.

How can we redesign health systems to improve diagnosis and treatment?

The NHS in England has recently implemented a timed lung cancer diagnostic pathway aiming to streamline investigations for suspected lung cancer, allowing earlier treatment alongside a more rapid “all clear” for patients found not to have cancer.21

The variations seen between treating centres are thought to contribute to poorer UK outcomes. An estimated 500 deaths could be prevented annually if the proportions of patients treated with surgery and radical radiotherapy matched those in centres in the highest quintile of treatment rates.22 Similarly, there is known variation between general practitioners in their propensity to investigate patients equally.23

What imaging, diagnostic work-up, and treatment planning should be undertaken?

The starting point is contrast-enhanced computed tomography (CT) of the thorax including neck and upper abdomen (fig 2). If initial CT demonstrates distant metastases or involvement of the supraclavicular or cervical lymph nodes, sampling allows staging and pathological subtyping (immunohistochemical and molecular analysis) in one procedure. If the disease seems suitable for radical treatment (either surgical or oncological), positron emission tomography-computed tomography (PET-CT) is indicated due to its high sensitivity for distant metastases. PET-CT has lower specificity for mediastinal disease, so systematic nodal sampling is preferred when imaging has indicated possible nodal spread. This is usually performed by sampling under endoscopic ultrasound guidance (usually endobronchial ultrasound guided transbronchial needle aspiration) which is more sensitive and cost effective than surgical staging alone.24 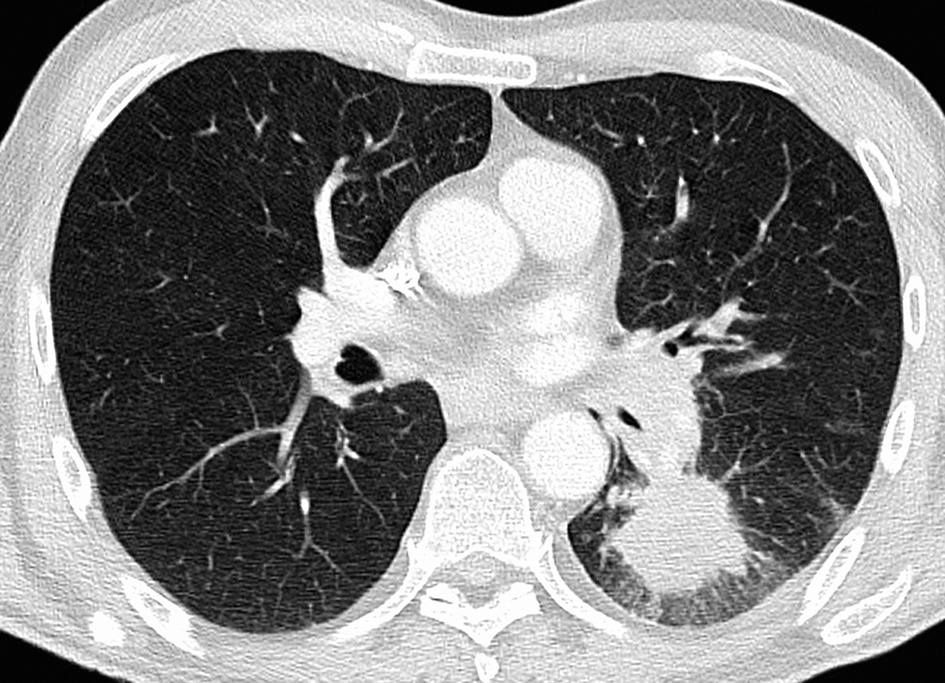 The requirements for pathological and genetic analysis of tumour biopsies have become more complex alongside the substantial increase in treatment options for advanced disease. The historical distinction between small cell and non-small cell lung carcinoma has evolved into more precise immunohistochemical subtyping between squamous and non-squamous non-small cell lung carcinoma, alongside assays that predict response to immunotherapy and genotyping to assess suitability for targeted therapies.

What are the latest management options?

Over recent years, practice has shifted from open lobectomy towards video-assisted thoracoscopic surgery. These two approaches showed similar outcomes in a large propensity matched analysis from the US.25 To date there has been no randomised comparison, but a UK trial has recently completed recruitment and will report shortly.26

Radical oncological treatment of early stage lung cancer has been revolutionised by the development of stereotactic ablative radiotherapy (SABR) for peripheral tumours. This delivers a higher dose than conventional radical radiotherapy and has better overall survival.27 Several studies attempting to randomise between surgery and SABR have failed to recruit, although one study is ongoing in North America (https://clinicaltrials.gov/ct2/show/NCT02984761).

Treatment options for patients with locally advanced lung cancer (involving hilar or mediastinal lymph nodes) now recommended by NICE28 include surgery with adjuvant (postoperative) chemotherapy or chemotherapy and radiotherapy given in combination. The updated NICE guidance also recommends consideration of chemoradiotherapy followed by surgery for some patients, although this is rare in practice.28 The recommendation is based on a new meta-analysis showing improved progression-free survival with this approach.29 There is evidence that immunotherapy after chemoradiotherapy is beneficial.30 Management of localised small cell lung carcinoma is with chemoradiotherapy31; prophylactic cranial irradiation reduces brain metastases and improves survival.

There have been considerable recent changes in the management of metastatic non-small cell lung carcinoma. For patients whose tumours harbour epidermal growth factor receptor (EGFR) or anaplastic lymphoma kinase (ALK) mutations, tyrosine kinase inhibitors are the treatment of choice, with second line agents (third generation tyrosine kinase inhibitors or cytotoxic chemotherapy) reserved for those who progress or develop resistance. Increasingly, other molecular targets are being exploited.

The management of patients without such mutations has been transformed by the advent of immune checkpoint inhibitors (immunotherapy). Precise indications for immunotherapy (monotherapy versus combination treatment with chemotherapy, and first line versus second line treatment) depend on the extent to which the tumour expresses programmed death-ligand 1 (PD-L1), and the patient’s performance status (only licensed for use in relatively fit patients), with practice evolving at a rapid rate. For those patients ineligible for or not responding to immunotherapy, palliative chemotherapy remains the standard of care.

Metastatic small cell lung carcinoma is primarily managed with chemotherapy, and consolidation chest radiotherapy is beneficial for patients who respond to chemotherapy.32

A small proportion of people with symptoms relating to airway occlusion by tumour may benefit from local treatment with stenting, argon plasma coagulation, or photodynamic therapy.

What interventions should be offered for people living with and beyond lung cancer?

Many patients with lung cancer and their families will need psychological support to help cope with the consequences of their diagnosis and treatment. Many patients continue to smoke after diagnosis, placing them at higher risk of treatment toxicity, cancer recurrence, second primaries, and poorer survival.33 Quitting smoking after a diagnosis can improve prognosis regardless of cancer stage.34 All patients who continue to smoke must be offered interventions to help them quit. Discussions should be conducted in a manner that minimises stigma and blaming.

The only randomised study of follow-up imaging found no survival benefit from regular computed tomography after surgical resection.35 In patients with metastatic disease, palliative radiotherapy is effective in the management of symptoms such as pain and haemoptysis. Early input from palliative care should be considered for patients with advanced disease, including those receiving active treatment, although access may vary internationally. Early palliative care improves outcomes, including survival.36

Comments by a patient peer reviewer have been incorporated to help capture the patient perspective.