Breast cancer risk in transgender people: the value of gaining new insights from other sources

Objective To investigate the incidence and characteristics of breast cancer in transgender people in the Netherlands compared with the general Dutch population.

Breast cancer is the most common malignancy in females,1 but it is rare in males. The lifetime risk in the general female population is 12% and in the general male population is 0.1%.2 Several risk factors have been identified for breast cancer, including advancing age, genetics (eg, BReast CAncer 1/2 mutations (BRCA1/2)), family history, overweight or obesity, breast density, tobacco use, alcohol use, and null parity in females.34 The molecular pathogenesis of breast cancer differs between sexes.5 For instance, cancers positive for human epidermal growth factor receptor 2 (HER2) are rare in males (1.7%), whereas 6-12% of the breast cancers in females express HER2.567

Transgender people experience an incongruence between the sex assigned to them at birth and their experienced or expressed gender. In the Netherlands, an estimated one in 2800 birth assigned males and one in 5200 birth assigned females identify themselves as transgender.8 However, a substantial increase in the number of referrals for psychological counselling, for endocrine or surgical treatment, or a combination of those has been seen over the past 10 years.8 Transgender people can receive gender affirming hormones (sex steroids) to reduce psychological distress and to induce desired physical changes, such as for body hair and body composition.910 In trans women (male sex assigned at birth, female gender identity), treatment usually consists of antiandrogens and oestrogens. In trans men (female sex assigned at birth, male gender identity), treatment usually consists of testosterone. Besides gender affirming hormone treatment, transgender people might also want surgical transition, which can consist of breast augmentation and orchiectomy or vaginoplasty in trans women and subcutaneous mastectomy and uterus extirpation or oophorectomy, or both, and phalloplasty in trans men. Subcutaneous mastectomy in trans men is often subtotal to obtain an aesthetic masculine thorax.

Whether (exogenous) sex steroids influence breast cancer risk and pathogenesis in transgender people is not fully understood. It is known that sex steroids induce changes in breast tissue.211 During female puberty and in trans women receiving hormone treatment, mammary development includes duct and lobule formation and an increase in deposition of fat in the breasts.2 Some structural changes occur in breast tissue under the influence of testosterone, such as an increase in fibrous tissue211 and the up regulation of potential oncogenes.12 Large prospective studies have shown that hormone replacement therapy increases the risk of breast cancer in cisgender postmenopausal women,131415 in particular in those using both oestrogens and progestogens, which could suggest an increased breast cancer risk in trans women receiving hormone treatment compared with cisgender men.

For this retrospective cohort study, we identified all transgender people who visited the gender clinic of the VU University Medical Centre Amsterdam between 1972 and January 2016 for either psychological, endocrine, or surgical treatment. More than 95% of transgender people in the Netherlands receive healthcare at our centre.8 People were excluded from analyses if they never used hormone treatment or the start date was unknown, they were younger than 18 years at the time of the study, or they used alternating oestrogen and testosterone during the follow-up time because of regret about their transition. As data on breast cancer diagnosis were retrieved from the Nationwide Network and Registry of Histopathology and Cytopathology in the Netherlands (PALGA), which covers all pathology diagnoses since 1991,21 we also excluded those whose last visit to our gender identity clinic was before 1991.

After inclusion of eligible people, we collected data about age at start of hormone treatment, type of treatment, gender affirming surgery, and medical history. Subsequently, the data were linked to PALGA and Statistics Netherlands (CBS). We retrieved data on year of breast cancer diagnosis and breast cancer histology from PALGA. To adequately calculate the follow-up time, we retrieved data on mortality from Statistics Netherlands.

Data from trans women and trans men were analysed separately. Baseline data are presented as means with standard deviations for normally distributed data, and medians with interquartile ranges, ranges, or both for non-normally distributed data. For those people who had started hormone treatment before treatment at our clinic, we used the first known start date of the treatment to calculate the most accurate duration. To calculate standardised incidence ratios, we determined the number of observed breast cancer cases in this cohort. Person time was calculated as the number of years from the first known start date of hormone treatment to the first terminating event: breast cancer diagnosis, death, or end of study period (31 August 2017). The number of expected cases were calculated using age matched incidence rates for cisgender men and women from the Netherlands Comprehensive Cancer Organisation (IKNL).22 We calculated the number of expected cases for the whole study population and for the age categories younger than 30 years, 30 to 50 years, and older than 50 years. Finally, standardised incidence ratios with 95% confidence intervals were calculated with a mid-P exact test. Mean oestradiol and testosterone concentrations for each participant were calculated by averaging the results from the measurements performed during hormone treatment.

Owing to the design of this study, there was no patient or public involvement. The results of this paper will be shared with the public through our institutions’ website and during an open science evening at our centre, which is intended for transgender people, their friends and family, and other interested people. 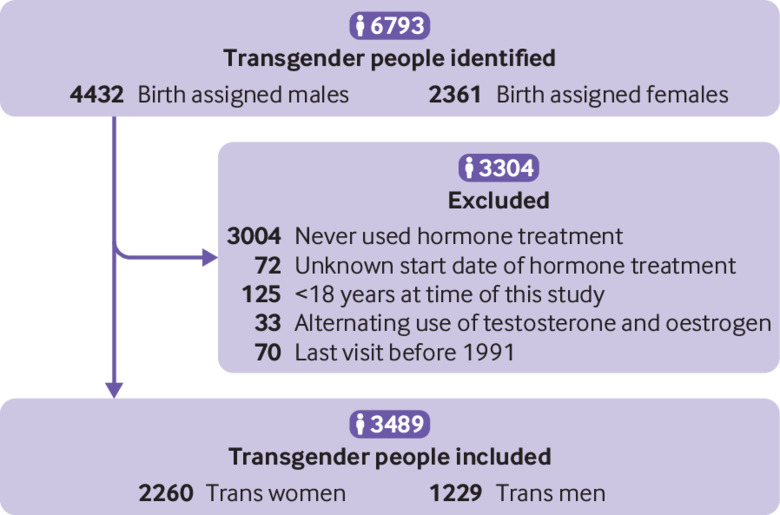 We were unable to perform analyses on different types of hormone treatment, because treatment was often changed over the follow-up period or there was too little variation in treatment regimen (this was particularly the case for antiandrogen treatment).

In accordance with previous studies, we observed a younger age at time of breast cancer diagnosis in transgender people compared with cisgender women.25 Moreover, the exposure to hormone treatment before breast cancer diagnosis was relatively short in trans women, at a median of 18 years, suggesting a rapid development of breast tumours in a subset of people. This observation could be explained by genetic susceptibility. Genetics data were available for one trans woman who is a carrier of a BRCA 1 germ line mutation. Another explanation might be the presence of undiagnosed hormone sensitive cancer before treatment, which could become apparent when stimulated by hormones. In trans women, most breast tumours were of the luminal type, suggesting that the tumours are driven in a cell autonomous fashion by the growth stimulatory actions of oestrogens as well as the progestogenic characteristics of the predominantly used antiandrogen cyproterone acetate. As androgens are known to inhibit the progression of luminal breast cancer, antiandrogenic treatment and orchiectomy might have contributed to tumour initiation in the affected people.26

Current recommendations suggest that trans women and trans men who have not undergone mastectomy should be biennially screened with mammography from the age of 50 years and if they are using hormone treatment for more than five years.272829 After subcutaneous mastectomy, monitoring of trans men with mammography is not considered feasible owing to the minimal residual breast tissue, and therefore self examination is advised, although there is no evidence for effectiveness.22729 The absolute risk of breast cancer in transgender people is still low in this study, and, more importantly, is not increased compared with cisgender women. We believe therefore that awareness in both doctors and transgender people30 is of more importance than the start of screening at a younger age or intensifying available screening, even though the median age at diagnosis in the current study was lower than in cisgender women. Besides, discontinuation of hormone treatment in older transgender people can be considered, which might from then decrease the risk of breast cancer.31 Trans women and trans men who have not had a mastectomy are advised to undergo the same intensified breast surveillance as their close female relatives if the risk of breast cancer is increased because of a familial predisposition. It is important to remember that transgender people who changed their legal sex might not be automatically invited for population based screenings, including breast cancer screening.

This study provides novel insights into the risk of breast cancer in transgender people. The reported risk in the current study is higher than estimates from previous studies, possibly related to cohort size and data quality, including the use of a national pathology database. Furthermore, this study included people with a wide range of ages. This study does, however, have some limitations. Owing to the retrospective design of the study, information about hormone use, family history, genetic mutations, benign breast lesions and breast density, tobacco and alcohol use, and body mass index is missing or incomplete. Although these risk factors for breast cancer should not be underestimated, the most important difference between transgender people and cisgender men and women is the use of hormone treatment. It would be interesting to study these risk factors in more detail, to investigate whether certain factors determine the observed increased risk in trans women. The study participants with breast cancer did not necessarily undergo treatment in our centre, and thus detailed data about type and outcome of the treatment are lacking in most of the cases. Although this would be interesting to study in more detail, it was not the purpose of this study. It would be worthwhile for future studies to investigate whether treatment outcomes of breast cancer in trans women are comparable to those of cisgender women.