Last week yet another report highlighted the poor state of child health in the UK.1 The Nuffield Trust analysis, focusing on adolescent health, shows we compare poorly with other countries in terms of childhood long term conditions, obesity, asthma deaths, and young people not in education, employment, or training.

Other recent reports show we also lag behind in terms of health for babies and younger children.23 Mental health for children in the UK has been described as being “in crisis.”4 The Nuffield Trust report further shows that 11% of young people aged 15-19 years in the UK are living in severe material deprivation. This is the fourth highest rate in Europe, with a worsening trend over time. Material deprivation is judged on whether families can afford a decent meal every second day and to go on holiday, and whether they can cope with sudden unexpected financial expenses.1

Not only do we compare poorly with other countries, the situation seems to be getting worse for many child health outcomes, with widening inequalities within the country. One of the most important indicators of population health, infant mortality, is rising in England. We have highlighted this concerning trend in The BMJ previously,56 showing that this rise has occurred particularly among more disadvantaged children. The latest data show a substantial reversal of the long term favourable trend in infant mortality, particularly in the most income deprived local authority areas in England (fig 1).7 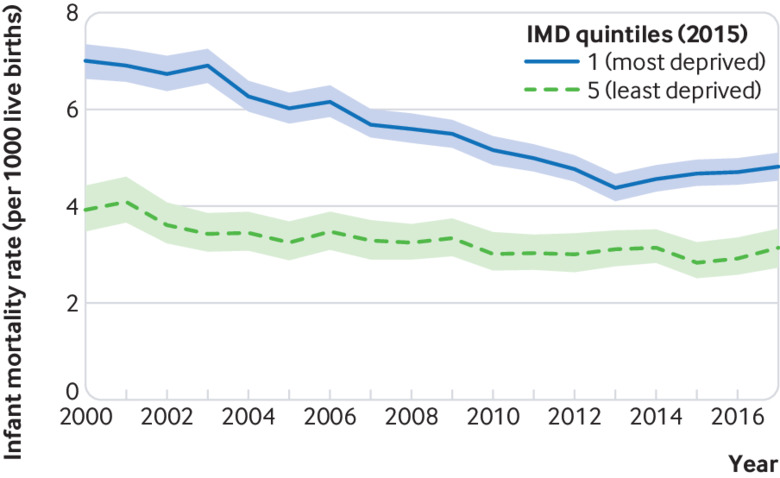 Child poverty has been rising over the same period. Since 2010, welfare benefits available to families with children have been systematically reduced, disproportionately affecting those who are most disadvantaged.89 Current estimates suggest that 4.1 million children in the UK are living in poverty—about 30% of children after housing costs are accounted for—most of whom are in working households. The Resolution Foundation, an independent think tank, predicts a further 6 percentage point rise over the next five years, pushing child poverty to its highest level on record. By 2023-24, the proportion of children living in relative poverty is on course to hit 37%, affecting an extra 1.1 million children.10

Child poverty is the one of the most potent drivers of lifelong ill health and health inequalities. Child poverty causes poor child health.11 It causes children’s deaths from asthma and injury and infections and prematurity. It causes mental health problems that blight children’s life chances.12 It is a common, modifiable exposure that has a big influence on child development across the population, affecting readiness for school and generating the early inequalities that track through to influence chances in later life.1314

Many solutions have been suggested to tackle poor health in the UK, but in the absence of policies to reduce child poverty all are likely to fail. In public health we often invoke the metaphor of drowning in a river to highlight the futility of fixing downstream factors such as lifestyle without first moving upstream and sorting out whatever is pushing people into the river in the first place. The UK has seen some improvements in downstream risk factors among adolescents—for example, in alcohol, smoking, and drug use—but other important health outcomes continue to deteriorate, potentially because we are not resolving the social causes of their poor health.1

The NHS long term plan goes some way towards raising the profile of children and young people in policy discussions, and there is also a welcome focus on health inequalities.1 But the lack of joined-up thinking across government sectors and agencies is a serious impediment to progress. How does the NHS expect to reduce inequalities in child health when cuts to local government services essential for child health are highest in the most disadvantaged areas1516 and the roll-out of universal credit is widely predicted to entrench child poverty still further?17

As long as political chaos and uncertainty continue, the most vulnerable in society will lose out. Various advocates (but not enough) have voiced concerns about the ongoing deterioration in the social determinants of health—as the systems that provide a foundation for health and development are eroded. We are now seeing a great unravelling of the health of both children and adults.18 These latest data on national trends from the Nuffield Trust and other analyses18 are deeply troubling, but the way forward is clear.

To improve child health and reduce inequalities, responsible agencies must implement the recommendations published in multiple inequalities reports internationally, including the Black report,19 the Marmot report,20 and our Due North report.13 The government must put child health at the centre of policy making and take immediate steps to reduce child poverty. We have the fiscal tools to do this—pensioners’ incomes have been protected throughout the tumultuous period since the 2008 recession.

Finally, let’s not forget that money is the ultimate personalised medicine: parents exchange it for health promoting goods and services such as better housing, better clothes, healthier food, and life affirming school trips for their children.11